The NFL combine provides a necessary standard of measurements and times that help teams and fantasy players sort out which prospects are likely capable of continuing their success against the NFL athletes they’ll face on defense. I rely on those combine results with my data-driven approach to rookie rankings. But it’s not always as simple as better time equals better prospect. Slot receivers in particular tend to look bad based only on their height, weight, and 40 time, the three combine results most fervently reported. But slot receivers also tend to be disproportionately effective in fantasy because their role leads to a lot of catches, and that makes them excellent targets in the middle rounds of dynasty rookie drafts.

A handful of the 2019 receiver prospects like Hunter Renfrow have already made names for themselves as slot players, but to identify other possible slot receivers, I rely on a similarity scoring model to compare them to established NFL players. That model manifests two types of receivers who frequently excel in the slot.

If all you did was look at a Bully, you would assume he was an outside receiver. He tends to have the height and weight of one, and he tends to bench like a running back. The key to his success out of the slot is short-area quickness that helps him separate from defenders within the first few yards past the line of scrimmage. Because of that, he tends to have relatively strong short shuttle and three-cone times, and he probably won’t have a sub-4.40 40 time since that would push him to the outside, where there are fewer prospects that are physically able to fill the demands of NFL teams.

Bully prospects are few and far between, and they are more difficult to identify than Hummingbird slot receivers. But they are definitely worth the effort to try to predict because their size offers them more targets in the red zone. Smith-Schuster, Boldin, and Tate have 10 seasons with 7 or more touchdowns between them. Hummingbird slot receivers seldom reach those heights.

(College player names link to my personal profiles of them on Twitter.) 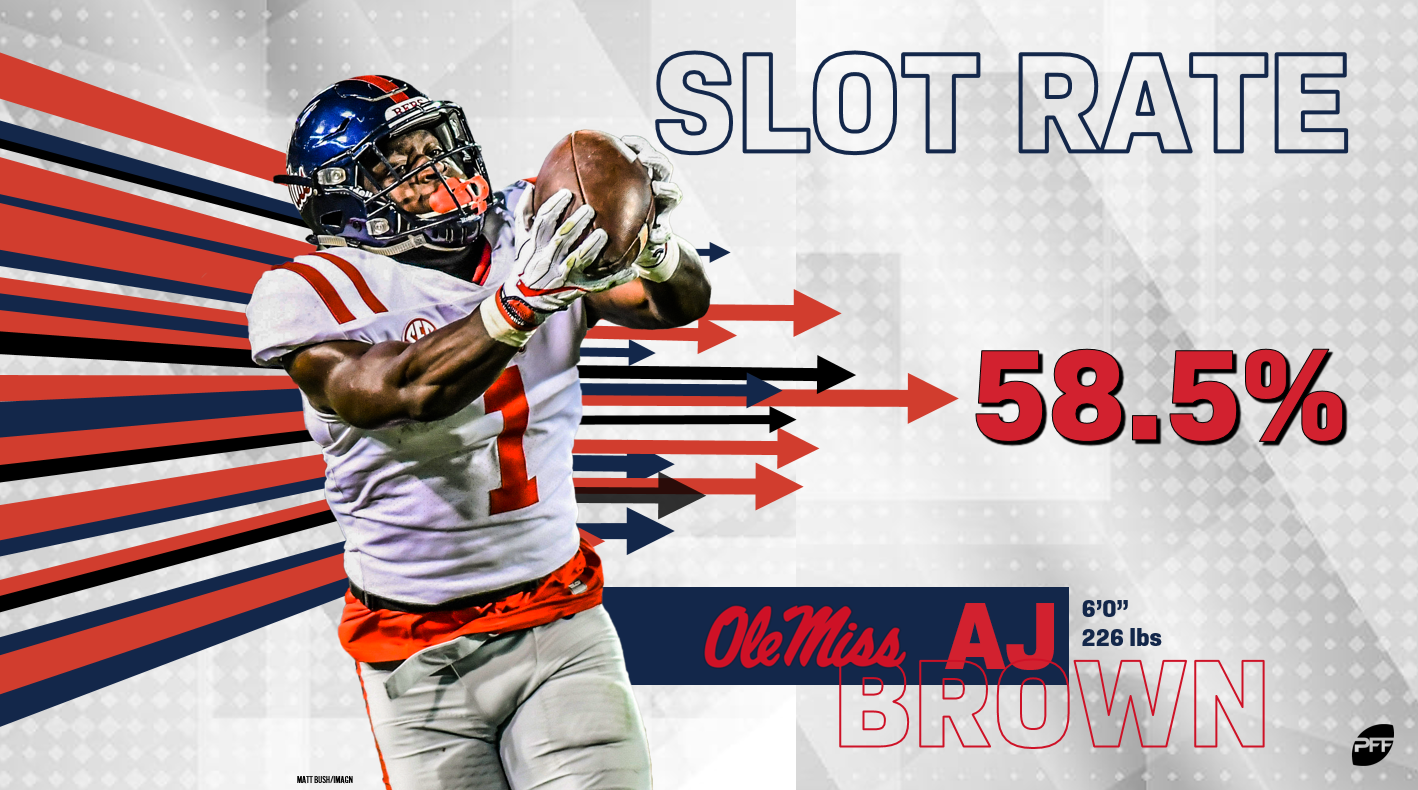 Brown is on the upper end of size (226 pounds) and strength (19 bench reps) for even this designation. He is my No. 2 rookie receiver and has Smith-Schuster upside on the right team.

Thompson has yet to recapture his 2016 productivity before he broke his leg, but he did excel at the combine with 19 bench reps and 4.03-second shuttle and 6.87-second 3-cone times. He seems more likely to move into a heavy slot role than most of the other bigger combination receivers.

There have not been many receivers outside of the Bully and Hummingbird measurement and time ranges who ended up spending the bulk of their time in the slot. That isn’t necessarily bad for their fantasy prospects, but the following players strike me as unlikely to end up with heavy slot usages and the corresponding workload that can buoy their fantasy value.

Hurd spent almost all of his time for Baylor in 2018 in the slot, but that makes sense for a recently converted college running back. In time, he figures to develop a route tree to work outside, where his 6-5, 226-pound frame would logically fit.

Sills maybe could have spent more time in the slot than his 34.4% rate were it not for teammate Gary Jennings. But I still don’t think that’s his ultimate professional role given his height and 9.7% drop rate from 2018.

Davis missed the bulk of the combine drills as he recovers from a torn ACL, and while his size makes him a possible fit as a Bully slot receiver, he spent most of his time on the outside in 2018 and likely lacks the quickness to move inside.

Doss worked inside and outside in 2018, but he may lack the necessary traits to excel in either role in the NFL. He only benched 8 reps, and although he skipped the shuttle and 3-cone drills, scouts question his ability to quickly change directions.

Like Hurd, Humphrey is a converted running back who spent most of 2018 in the slot. But unlike Hurd, Humphrey underwhelmed at the combine with 13 bench reps, a 4.29-second shuttle time, and a 4.75-second 40 time and may not be starter-caliber in either role.

A Hummingbird is probably a match for your mental image of a slot receiver. He is shorter and smaller than a Bully and has less strength. And although he might be a bit quicker in the shuttle and 3-cone drills, he might not be. So many of the traits that make for a successful Hummingbird slot receiver aren’t captured by the combine drills, so while these types of players can be good fantasy sleepers in general, they can be difficult to rank correctly within the category. 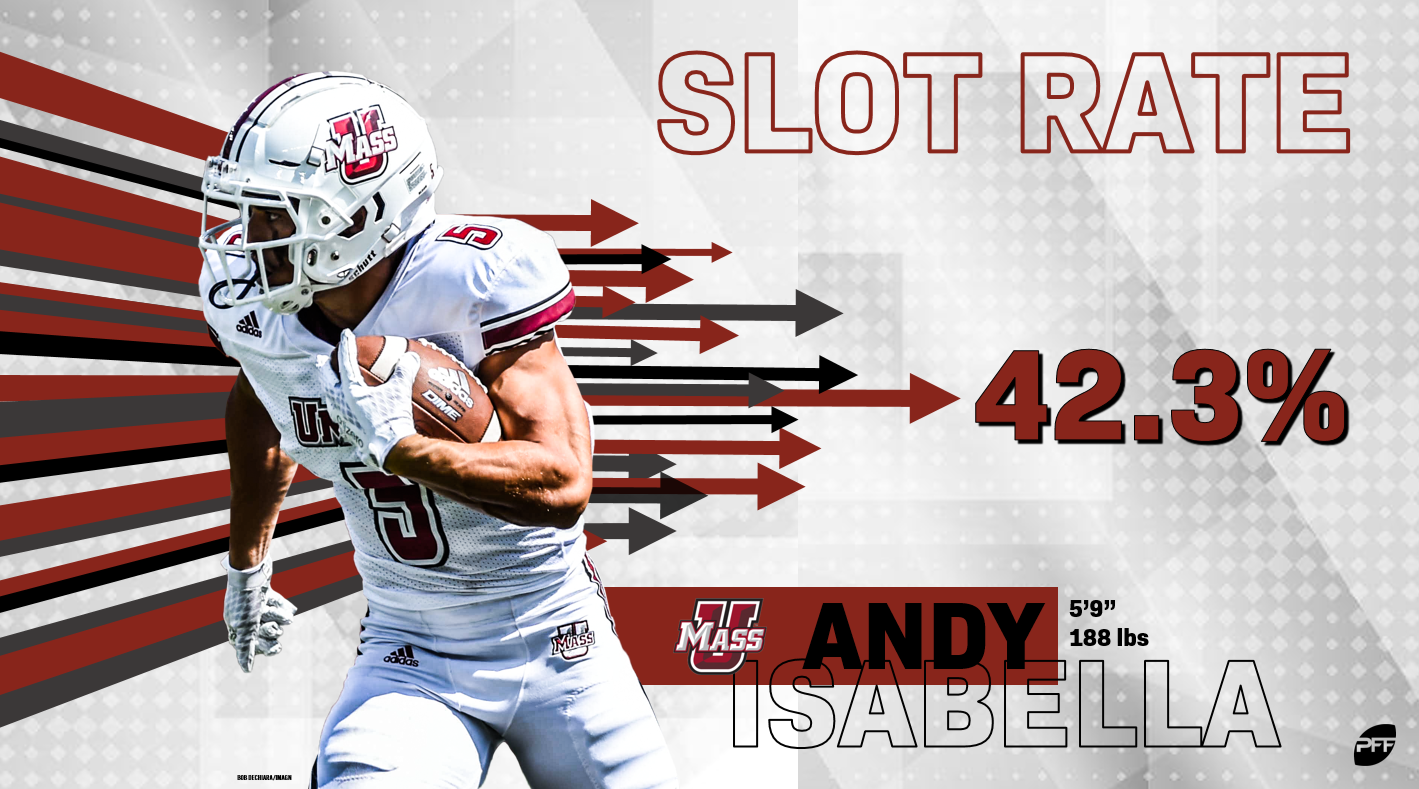 Isabella is quick with 4.15-second shuttle and 6.95-second 3-cone times, but he’s also fast with a 4.31-second 40. That makes him my top choice in fantasy among the likely Hummingbird slot receivers since he should add the occasional explosive play up the seam.

Renfrow didn’t show top-end measurements at 184 pounds with 7 bench reps and a 4.19-second shuttle time, but he produced out of the slot against atypically strong college competition for Clemson.

Hart wasn’t limited to slot duty at a smaller school in Georgia State, but he will be in the NFL given his measurements. Hart’s best attributes are his quickness and ability to change speeds, which should serve him well in that role. His 10.9% drop rate from 2018 is a concern.

Godwin underperformed expectations with a 4.55-second 40 time but tested quick with a 6.96-second 3-cone time. I expect that will push his workload more toward the slot at the next level.

Meyers was almost exclusively a slot receiver for NC State, but his 4.63-second 40 and 4.23-second shuttle times are on the low end for Hummingbird slot receivers. I give him longer odds to find fantasy value than the other clear-slot options, but his excellent hands (3.2% drop rate in 2018) should help.

Despite seeing less than a quarter of his routes come in the slot in 2018, Johnson is a classic fit for a Hummingbird slot role with his excellent 4.16-second shuttle and 6.88-second 3-cone times.

Campbell’s profile and combine performances aren’t too different than my top Hummingbird slot receiver Andy Isabella, but better size and an excellent 40.0-inch vertical make him a strong prospect on the outside. He may not be an NFL slot receiver, but he’s my No. 5 fantasy rookie receiver.

Hardman is smaller than a prototypical outside receiver, but he also has 4.33-second speed. I expect he’ll move out of the slot to become more a deep threat like his comps Brandin Cooks and Tyler Lockett.

Morgan’s combination of a strong 4.13-second shuttle time and slow 4.53-second 40 time points to possible slot work, but I think it’s more likely he’s just an underwhelming outside prospect who has some strengths like catch radius and blocking that aren’t captured by the combine. 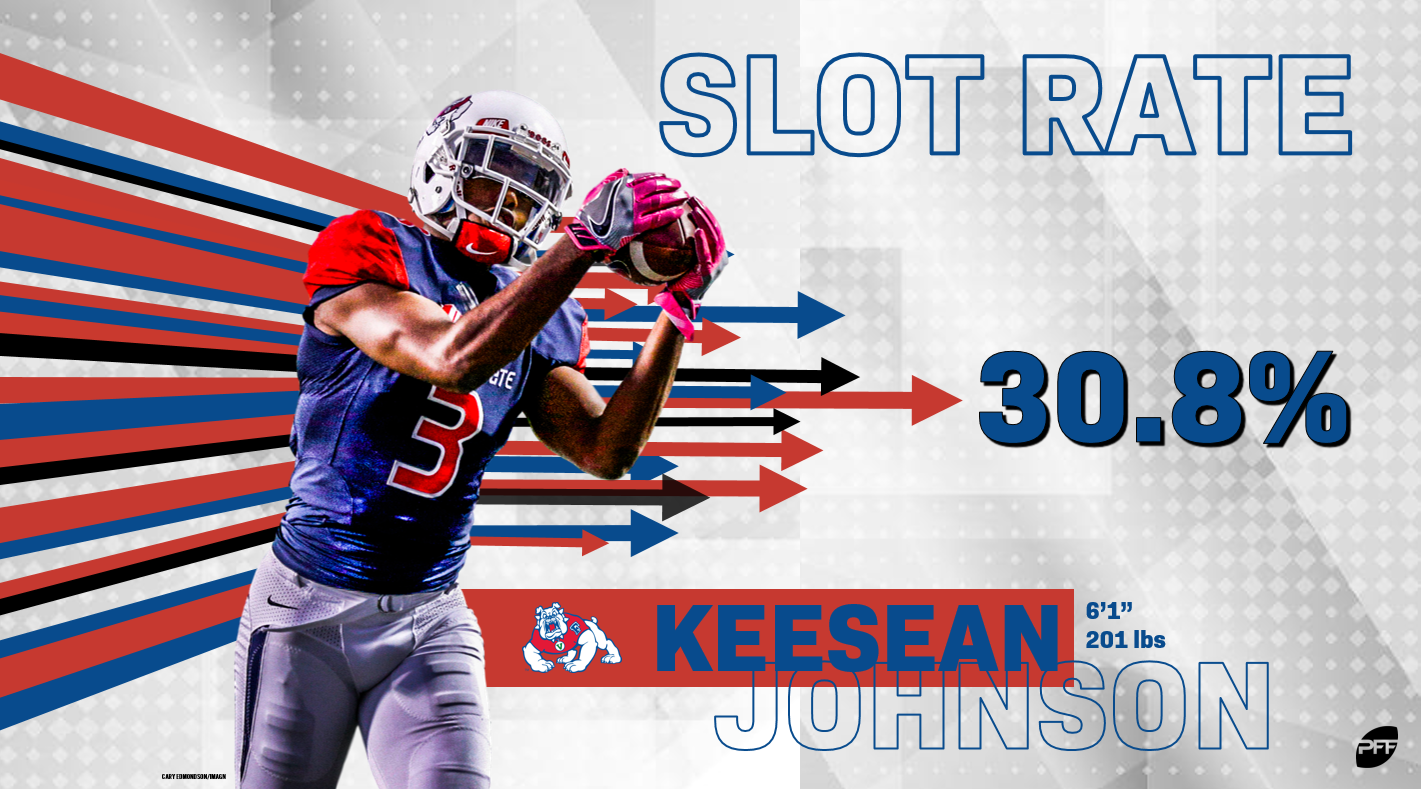 Like Morgan, Johnson’s times suggest he might be best suited for the slot but doesn’t have a ton of work in the role to demonstrate effectiveness. 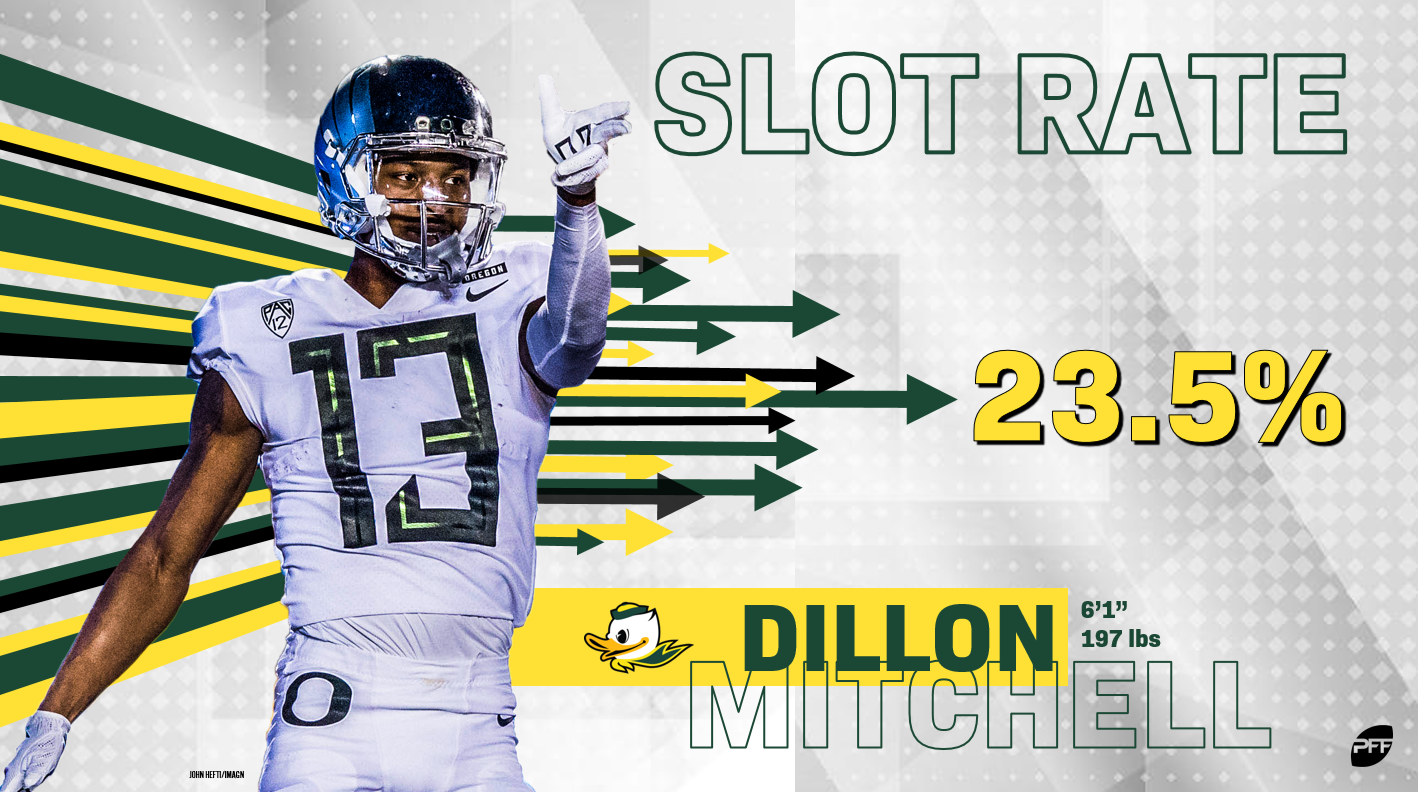 Mitchell is quicker than fast and so could see his slot rate increase if he finds the field at the next level. But he is an unpolished route runner with questions about his work ethic, so an outside or special teams role might be more likely.

Ratliff-Williams is small for an outside receiver, but that’s where he has played and best fits with his ability to beat press coverage and strong blocking. His 10.6% drop rate from 2018 would be a concern for a slot receiver.

Snelson showed an appealing 14.3 yards per reception at UCF even with his 96.1% slot rate in 2018, but his lack of a combine invitation makes it difficult to project his NFL fit given his short history of college production. That does make it possible that I’m underrating his chances to find an NFL job in the slot.