Each week in this space, I’ll be highlighting the players I’m building most of my lineups around on that week’s main slate. (Most of these locks are for tournaments, though I’ll do my best to differentiate where needed.) Lock these guys into lineups and go from there. Check out below for Week 13. 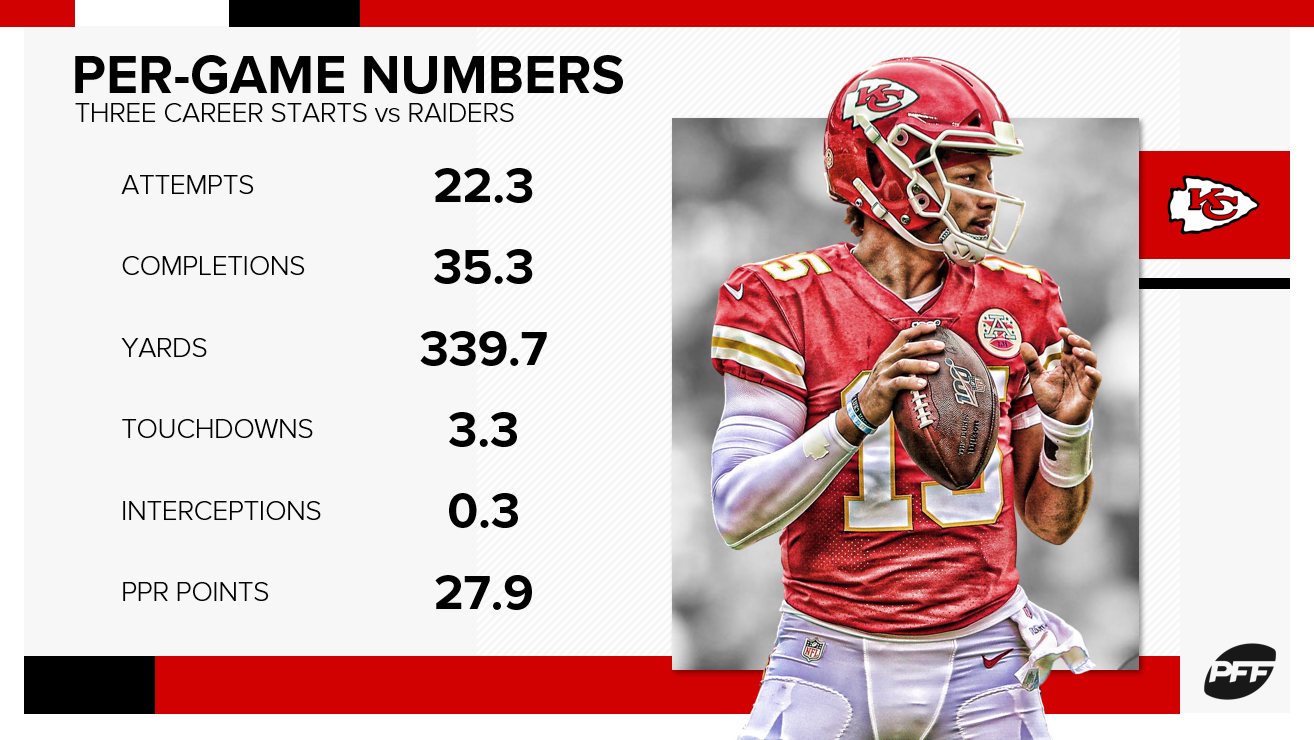 Not that you ever need a reason to use Mahomes, but you get one this week, facing a Raiders team that is allowing the sixth-most fantasy points per game to opposing quarterbacks. And of course, we already saw Mahomes light the Raiders up for four touchdown passes (in a single quarter!) earlier this year. Mahomes and Lamar Jackson are in a tier to themselves in DFS pricing this week on both main sites, and if you’re paying up at the position, Mahomes makes far more sense than Jackson against the 49ers defense.

If you wanted to create an argument against Darnold this week, it would have centered around Ryan Finley struggling so much that the Jets might not have to keep their feet on the gas and running the ball to put the game away. But with Andy Dalton back at quarterback, the Cincinnati offense should be just good enough that the Jets won’t ease up. Darnold, in the middle of a hot stretch that has come against the Giants, Washington, and Oakland, with 21-plus points in all three, should keep it going against the poor Bengals defense.

The Buccaneers have been just about the pass-funnel-est defense in the league this year, allowing the third-fewest fantasy points per game to opposing running backs but the most to wide receivers and the second-most to tight ends and, importantly here, quarterbacks. And Foles since returning from injury has been throwing the ball like he’s making up for lost time, with 95 pass attempts in two games that is nine more than any other quarterback in the league. He should pick this defense apart.

Christian McCaffrey, Carolina Panthers (vs. WAS)

The DFS sites keep raising McCaffrey’s salary relative to the field (he’s the most expensive running back on DraftKIngs by $2,700 and on FanDuel by $2,400), and so far it hasn’t really mattered, as he’s been blowing everyone out of the water. McCaffrey more or less will have a dud eventually, but you still aren’t wrong to roster him. And as 10-point favorites against a Washington team allowing the sixth-most rushing yards and ninth-most receiving yards to running backs, this is a week to expect McCaffrey to keep it going.

Nobody is allowing more PPR points per game to running backs than the Chiefs this year. And crucially for the little-receiving-value Jacobs, the Chiefs have allowed the second-most rushing yards to the position, at 121.6. Jacobs averaged 8.3 yards per carry last time he faced the Chiefs, and he’s topped 100 rushing yards in four of his last seven games. Expect a load of Jacobs.

Admittedly, this one carries more risk than some of the other names here, but with Jones the 23rd-priciest back on DraftKings and 20th on FanDuel, the potential payoff is massive. He has 30-plus snaps in three of his last four games, double-digit carries in four of five, and touchdowns in four of six and five of eight. The Jaguars have been an absolute run-funnel this year, allowing a league-leading (by a lot) 5.4 yards per carry. Jones could have a big day at a bargain price.

So, if you go to our WR/CB matchup chart, you can sort by matchup advantage, basically a fancy way of seeing which receivers have the best matchup of the week. And this week, the Packers have the top matchup, the second-best matchup, and the third-best matchup. In other words, the Giants secondary has struggled. And Adams, likely to see plenty of Janoris Jenkins in coverage, has the best one. He’s had double-digit targets in each of his last four games (since before his injury), and should easily crack that again this week. 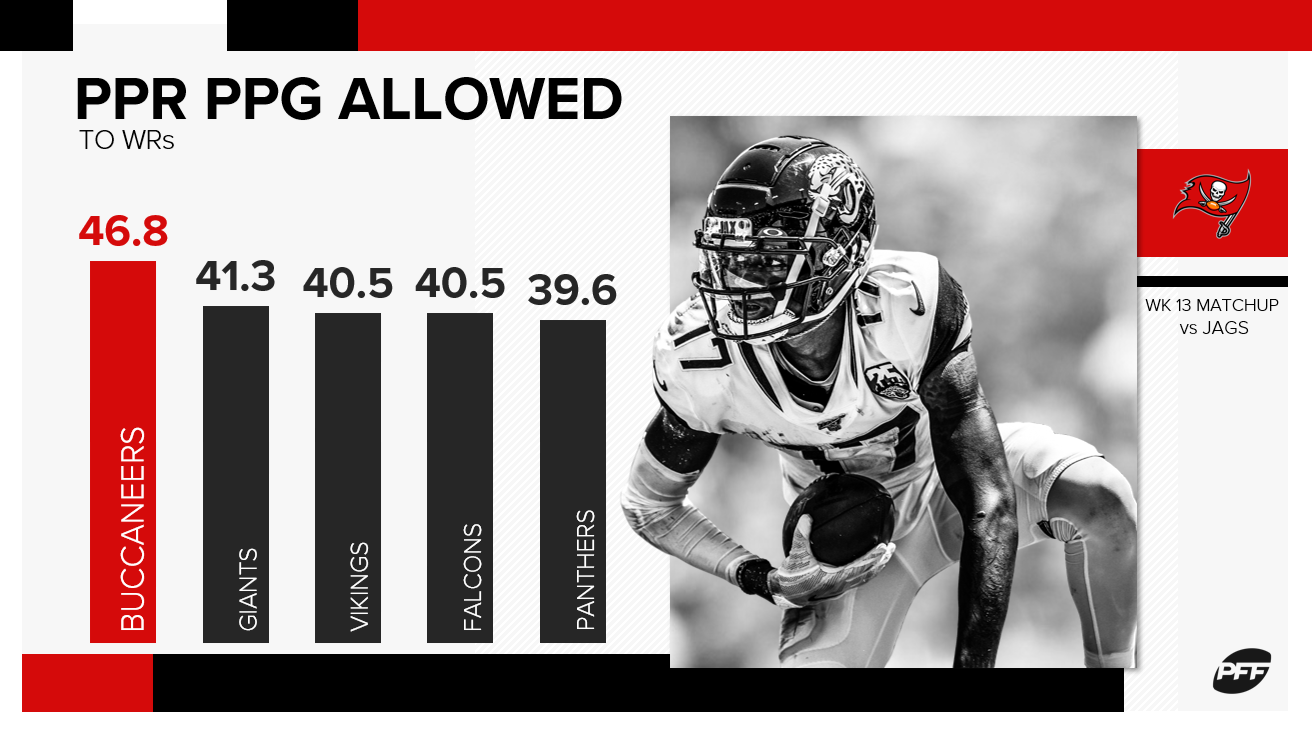 I could genuinely formulate an argument for all three of the Jaguars receivers as locks this week (the Buccaneers have allowed the second-most points per game to slot receivers, where Dede Westbrook spends his time, and the most to left-aligned receivers, where you’ll find Chris Conley), but I prefer to stay with the No. 1 and stack him with Foles in what should be an electric matchup with a lot of points.

Boyd was fantasy’s No. 16 receiver before Andy Dalton was benched, and he did that despite only 1 touchdown on 79 targets. A little touchdown luck and he’d have been threatening top-12 status. Now, with Dalton back at the helm, Boyd should be able to get back to the good against a Jets defense allowing the seventh-most PPR points per game to opposing wide receivers.

Parker came into the week tied for the second-longest streak of games with double-digit PPR points among receivers, at eight. And sure, some of his success has been because of attrition — the Dolphins are fast running out of receivers. But that is no less true this week, with Parker comfortably on pace to set a career-high in targets, receptions, yards, and touchdowns, and the Eagles are a friendly opponent for him to keep that going.

If Jacobs doesn’t get it done against the Chiefs, it will be because Waller did. The injury to Hunter Renfrow should open back up some of the targets Waller has lost of late, and with his DFS salary flagging (he’s the sixth-priciest tight end on the main slate on DraftKings, eighth on FanDuel), the upside is enormous.

This advice is predicated on Gerald Everett missing Sunday’s game, but that has looked increasingly likely over the course of the week as he deals with a knee injury. And an Everett absence would leave Higbee clear to take advantage of the best possible matchup for a tight end, facing an Arizona defense that is allowing 20.7 PPR points per game to tight ends, solidly 4.0 points per game more than any other team.