It was a lost season in 2015 for the Ravens, with injuries decimating the offensive skill positions. By the end of the year, Baltimore was left with a skeleton crew of starters that consisted of Ryan Mallett at quarterback, Javorius Allen starting at running back, Kamar Aiken and Chris Givens playing the primary receiver roles, and rookie Maxx Williams at tight end. That’s certainly not what anyone envisioned for the Ravens entering last season.

But it’s a new day in Baltimore, and Joe Flacco says he’s on track to be on the field when Ravens camp opens up. Flacco suffered a torn ACL in Week 11, leaving the Ravens to rely on Matt Schaub – who was also lost to injury – and eventually Mallett. With Schaub now in Atlanta, Mallett will serve as Flacco’s primary backup. While the news surrounding Flacco’s injury has remained positive throughout the offseason, we’re not particularly optimistic about his fantasy prospects. Even with an upgraded and healthier surrounding cast, Flacco still isn’t more than a fringe QB2.

Injuries also ravaged the Ravens’ wide receivers last season. Entering the year, Baltimore looked to have a dynamic group with the seemingly ageless Steve Smith and athletic rookie Breshad Perriman penciled in as the starters. Smith ended up rupturing his Achilles in Week 8 and Perriman sat out his entire first year with a torn PCL. Smith initially planned to retire after last season, but he’s now returning with the hopes of achieving 1,000 career catches. To put things into context, Smith was fantastic last year, grading out as a blue-level elite player here at PFF. However, he’s entering his age-37 season and still has no timetable for return. At this point, he’s an extremely risky fantasy option who isn’t worth his ninth-round price tag. 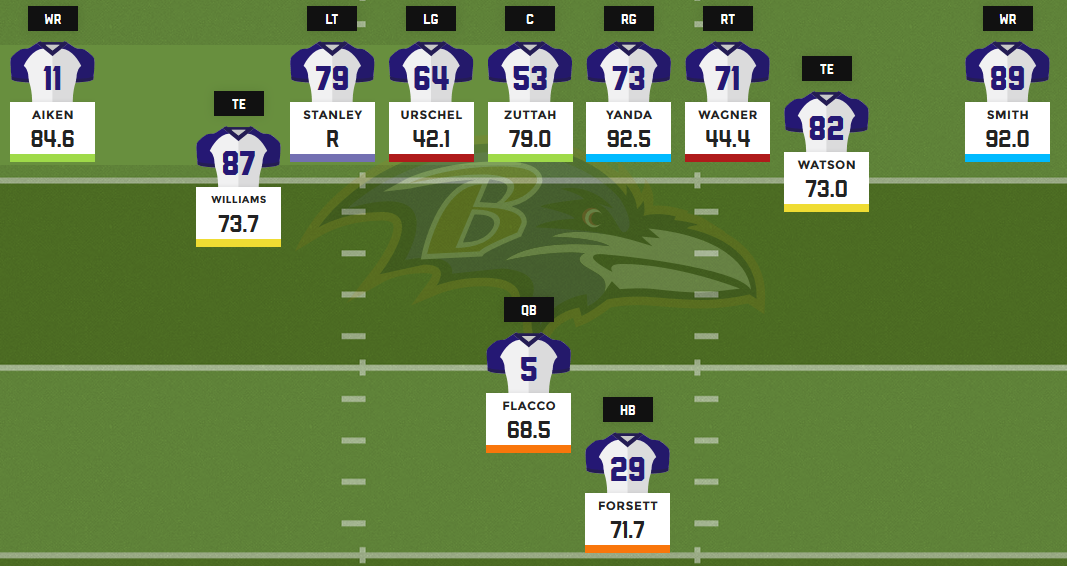 Perriman generated some fantasy buzz as a potential breakout player early in the offseason, but that all was squashed after he suffered a partially torn ACL during OTAs. The good news is that he looks to have avoided missing significant time and could potentially be ready as early as Week 1. That might be pushing things a bit, and Perriman’s status is still very much up in the air. He’s oozing with upside, but Perriman’s mounting injury resume makes him a dicey fantasy option this season.

Rounding out the wide receiver group are Kamar Aiken and offseason signee Mike Wallace. Aiken is coming off a strong season with 75 catches for 944 yards and five scores. He’s a sneaky bet for the No. 2 job, and certainly has a chance to lead the team in receiving. Aiken is currently going as the 50th wide receiver in fantasy drafts with Wallace six spots later. Wallace comes over from Minnesota following a disappointing season where he finished 74th among wide receivers in fantasy scoring. But it isn’t fair to simply pin this dip in production on Wallace. He’s a field stretcher who played in a conservative offense, so the writing was on the wall for a decline. Wallace’s skillset meshes much better with Flacco’s game. He’s an intriguing post-hype sleeper.

Baltimore has a bit of a logjam at tight end with Ben Watson, Maxx Williams, Crockett Gilmore and Dennis Pitta all currently on the roster. While depth is always a good thing in the NFL, this is a bad situation for fantasy purposes. Watson is the likely top fantasy option, but he’s a lock to regress from his impressive 2015 campaign. This is looking like a committee situation where the ball will get spread around. That means fantasy owners are unlikely to get any value out of this group with the exception of a random DFS dart.

At running back, the starting job is essentially Justin Forsett’s to lose entering training camp, but Allen and rookie Kenneth Dixon are also in the mix. Entering last season, Forsett was the 11th running back being taken in fantasy drafts with an ADP in the tail end of the second round. He ended up as one of the many injured Ravens, but Forsett was somewhat of a disappointment before that point, ranking 18th among running backs in fantasy scoring. A closer look shows his performance was actually much worse. Forsett ranked 67th at the position in fantasy points per opportunity, and he managed a lackluster 0.70 yards per route run.

[What kind of draft value can you get by taking a Baltimore receiver? Will Aiken or Wallace offer good value late? Check out our PFF Draft Master tool and try a mock draft, complete with offensive line grades, full projections and all the PFF data.]

While Forsett may open the season as the starter, his fantasy upside is limited. The same cannot be said for Dixon, who is coming off a prolific college career where he put up 5,452 yards and a whopping 87 touchdowns. He’s a player who profiles as a potential three-down option who could immediately usurp receiving duties from Allen, and has the potential to blow right past Forsett for early down work. Fantasy drafters would be wise to not overvalue Forsett, and to also take a late-round stab on Dixon in re-draft league.

On the defensive side of the ball, C.J. Mosley has back-to-back top-10 fantasy finishes under his belt. Entering his third professional season, Mosley is a strong LB1 with No. 1 upside, especially with Daryl Smith no longer on the Ravens. Of course, Mosely won’t get to every tackle opportunity. Some of those tackles will get through to the next level where free agent signee Eric Weddle will be there for cleanup duty. A perennial DB1 in his time with the Chargers, Weddle is a good bet for strong fantasy production in Baltimore.