Small-slate DFS requires a completely different approach than the traditional main slate in the regular season with around 10 different game options.

The various DFS models in this article will have applications and plays for any of the sites that span the weekend contests. On shorter slates, don’t be afraid to press on the game stack, with the expectation that identifying the right game provides value when it far outshines the others.

One of the best ways to find value opportunities on a given slate is to start with the salary-adjusted expectation for all players. Because DraftKings has been around for over six years, we now have a worthwhile dataset of player salaries and their resulting fantasy performances. By figuring out the expectation based on each player’s salary and position, we can compare their salary-expected fantasy performance to PFF’s fantasy projections. Doing this highlights the best value plays based on salary.

Utilizing specific variables, we can build a model tuned to predict performances where a pass-catcher goes over a certain site-specific scoring threshold. For DraftKings, this is set at 25 fantasy points.

This model provides the percentage chance that each receiver will meet or exceed our fantasy-point threshold for the site given their historical opportunity. The model won’t be right on every player, but it is useful in identifying the blowup performances we want to unearth for our DFS lineups.

Past results from the 2020 and 2021 NFL regular seasons have this model with a 13.8% hit rate on individual player write-ups, meaning almost 14% of the players written up in this section have gone on to exceed 25 DraftKings fantasy points in that given week. Almost 24% have gone on to have a top-10 finish at their respective positions, while 3.5% of players written up have led the position in fantasy scoring for that given week. 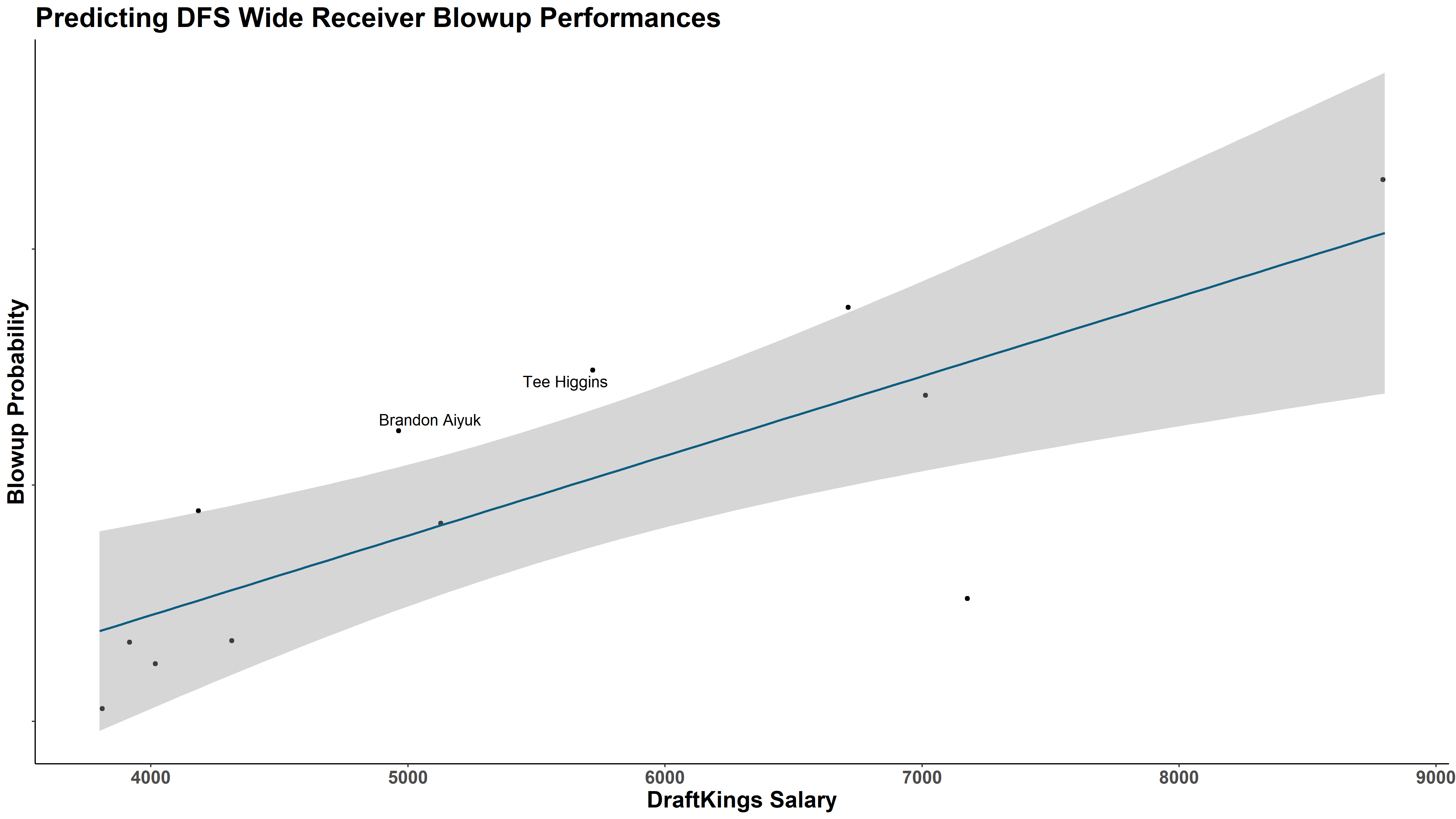 Higgins is setting up as the perfect pivot on the conference championship short slate for DFS. Ja’Marr Chase projects as the third-highest rostered wide receiver and will be included in nearly every game stack for the Bengals-Chiefs matchup.

Higgins hasn’t flashed the same big-play potential as Chase, but he has only nine fewer explosive pass plays than the rookie sensation in 2021. Higgins doesn’t leave the field and actually accounted for a higher target share than Chase in the divisional round. If Chase turns into a decoy at a high roster percentage, then Higgins sets up for the slate-breaking performance that separates DFS rosters this weekend. It’s not the most likely outcome, but the roster percentage projections make this the correct play in a large-field tournament.