As the deep ball goes, so goes Blake Bortles in fantasy

INDIANAPOLIS, IN - JANUARY 01: Blake Bortles #5 of the Jacksonville Jaguars looks to pass during a game against the Indianapolis Colts at Lucas Oil Stadium on January 1, 2017 in Indianapolis, Indiana. The Colts defeated the Jaguars 24-20. (Photo by Stacy Revere/Getty Images)

Murmurs around the draft world have increased in volume as the event approaches that the Jacksonville Jaguars may select a quarterback — either with their first-round pick (No. 4 overall) or in later rounds — as an eventual replacement for Blake Bortles.

A year ago, for better or worse, there were no such rumors, as Bortles was coming off of a season with an 80.3 PFF overall grade, 4,428 passing yards, and a 35:18 TD:INT ratio. For fantasy players, that was good enough to be the No. 4 performer for the season, behind only Cam Newton, Russell Wilson, and Tom Brady. Nobody thought Bortles was a future superstar, but at the least, no one had the Jaguars looking for a replacement quite yet.

This past season, though, told a different story. Bortles’ overall grade fell to 52.9, his passing yards to 3,905, and while he threw two fewer interceptions, he also tossed 12 fewer touchdowns. For fantasy, he went from the No. 4 quarterback to the No. 9, and a big chunk of that was his durability, as Bortles played all 16 games — his fantasy points-per-game average was only 15th in the league.

So what changed? What took Bortles from being a fantasy league-winner in 2015 to a guy going 22nd at the position in early fantasy drafts (per Fantasy Football Calculator) and a quarterback whose team might pick his replacement in this weekend’s draft?

I pulled Bortles’ rate stats for a whole mess of categories over his three-year career and checked his ranking each season in each stat:

As an overall passer, Bortles has never been particularly good. His accuracy percentage was at its worst during his best season. His passer ratings, play-action stats, pressure stats, and — goodness, most everything — were just as “good” when Bortles was good as when he was bad.

But man, those deep-ball stats.

In 2015, when Bortles was successful, his deep-ball (balls targeted 20-plus yards downfield) accuracy percentage was among the league’s best, as were his deep passer rating and percentage of yards in the air. Those are all, unsurprisingly, connected. It seems that where Bortles’ deep-passing skills go, so goes his fantasy value. 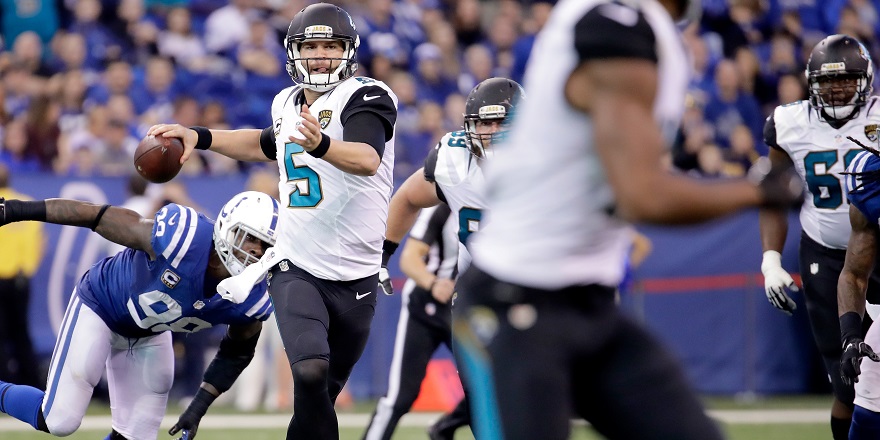 So what does this mean? Well, to me, it means that deep-ball prowess is gravy. As I noted when I discussed Matt Ryan, his work on the deep ball took him from a competent fantasy quarterback most of his career to a superstar in 2016. It did basically the same, on a slightly lower level, for Bortles in 2015. But it doesn’t appear to be trustworthy.

For Blake Bortles, 2015 was a culmination of several things working at once. The biggest one of all was his success on the deep ball. And that’s unpredictable. Is there a high-end fantasy QB1 in Jacksonville? Maybe. But is there a reliable one? Probably not.