Adjusting for fantasy football leagues with 6 points for passing TDs

The normal scoring structure in fantasy football is for quarterbacks to get four points for each passing touchdown. That is because quarterbacks naturally account for so many more touchdowns than their peers at the other positions, so it keeps QB scoring from being wildly disproportionate.

But it’s not universal. There are plenty of leagues that use six points for all touchdowns, passing or otherwise. So today we’re looking at a few things to know about leagues that score like that.

A rising tide lifts all boats

The first thing to remember is that things aren’t that different in six-point TD leagues. You aren’t drafting a quarterback versus a running back; you’re drafting for value at a position, and that means what you care about more than anything else is how a quarterback performs compared to his fellow quarterbacks, and every quarterback gets the benefit of the extra scoring. So leagues with six-point TDs don’t automatically take quarterbacks from “draft late” to “load up in the first round.” The changes are more subtle than that.

In normal leagues, a 25-yard touchdown pass is worth five points (four for the touchdown, one for the 25 yards), while a 25-yard touchdown run is worth 8.5 points (six for the touchdown, 2.5 for the 25 yards). One play like that isn’t going to make or break a season. But quarterbacks who do a lot of running, like Lamar Jackson and Josh Allen, can make their fantasy bones in that format even if they aren’t dominant as passers. A rushing touchdown being worth 50% more than a passing touchdown helps them make up a gap.

When touchdowns are worth six points, though, the gap is much lessened. There’s still a difference in yardage scoring, but in our above example of the 25-yard touchdown, the passing score is worth seven points compared to the 8.5 points the rush is worth. 1.5 points is still 1.5 points, but that’s a much narrower gap than 3.5.

In short, rushing quarterbacks like Allen, Jackson, and Cam Newton are insanely appealing in normal fantasy leagues, but less so in six-point TD leagues, because they have that much more of a gap to make up. 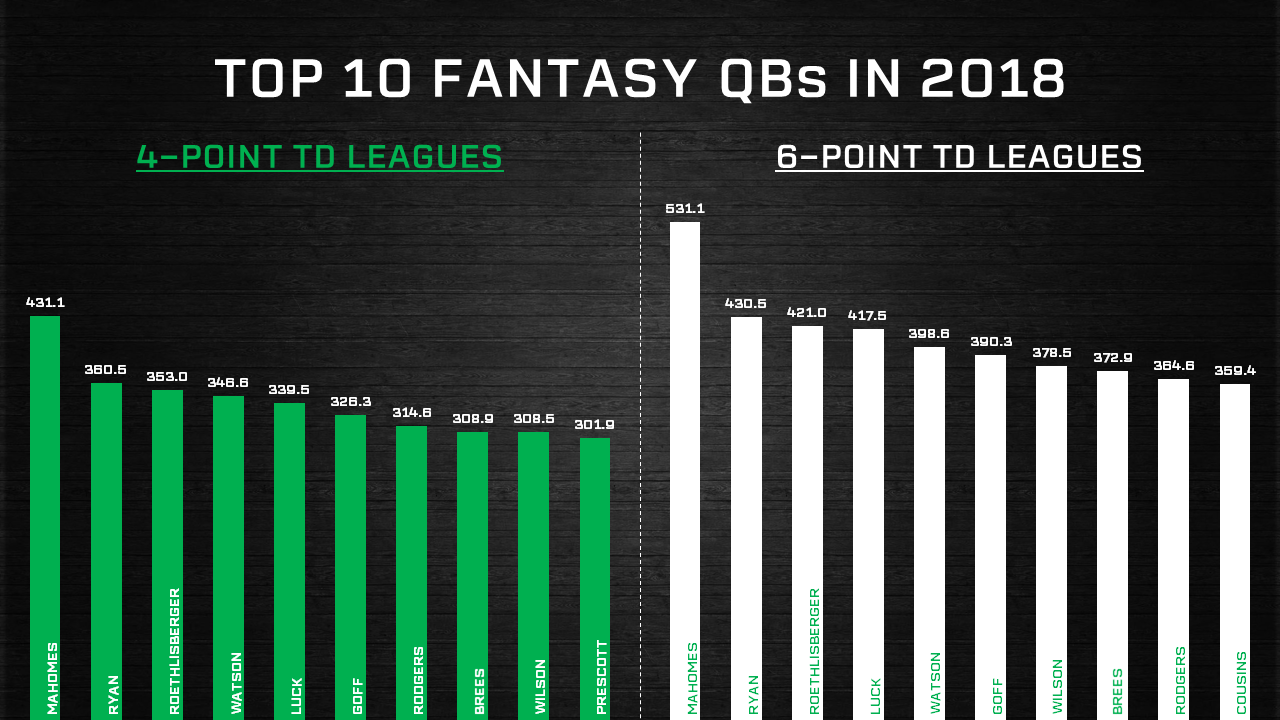 This is obvious, but it’s still worth noting — when quarterbacks get six points for a passing touchdown, quarterbacks’ scoring goes way up. For the most extreme example, Patrick Mahomes was the No. 1 quarterback last year, with 431.1 fantasy points, 70.6 more than ­second-place Matt Ryan. He threw 50 touchdown passes. The math there is easy. If each touchdown is worth two more points, six-point leagues would give him 100 more points, 531.1 points … and 100.6 more than Ryan.

Most fantasy-relevant quarterbacks (other than the aforementioned run-dominant guys) throw a similar number of touchdowns, from the high 20s to the high 30s. The differences in that range matter, but if there’s a 10-score gap from one guy to another, over a full season that’s still only 20 points extra in the six-point leagues, just over a point a game. But there have been eight QB seasons in the last decade in which a quarterback has topped 40 touchdown passes, including four over 45. By those numbers, you’re talking about a significant difference. Aaron Rodgers in 2011 threw 45 touchdown passes. Aaron Rodgers in 2018 threw 25. That’s 40 extra points over the season, 2.5 per game.

For guys with normal ceilings, their draft stock, relative to other quarterbacks, doesn’t change much. For guys with elite ceilings in passing touchdowns — Mahomes is the obvious example right now — draft stock can shoot up. In leagues with four-point touchdowns, Mahomes is the No. 42 overall player in our PFF Fantasy staff rankings. But if touchdowns were worth six points, he’d rise. A Mahomes who got six points for ever passing score would (just speaking for myself here) be ranked as a top-30 fantasy option at least, maybe higher. Ceilings can carry a player much higher when points are easier to come by.