The degree of importance of NFL scouting combine drills and measurements depends on what you’re looking to predict: draft position or actual player value. The former is known for all historical draft picks; the latter, more estimation and shared understanding. One of the major recent advancements of player valuation at PFF is translating our player grades to a universal metric of value — wins above replacement (WAR). This analysis is similar to my combine analysis for fantasy football, but now focusing on “real” value in terms of PFF WAR. The first installment for positions on the offensive side of the ball published earlier this week.

The relationship between draft position and WAR is fairly strong, but contrasting the two gives additional insight into systemic errors in over/underweighting certain traits and how teams can more productively harness information gathered at the combine.

Approximate value was a tremendous advancement in player valuation and the best public metric available to Lotter at the time of the analysis. The shortcomings of AV mostly relate to its focus on volume and an inability to differentiate between players on the same team for certain position groups that lack traditional stats, such as offensive linemen.

Even for position groups with more extensive traditional stats, such as tackles and sacks, their production can be more a function of luck and opportunity than adding value. This is where PFF’s WAR metric can truly add the proper context and weighting to a player's performance. For my analysis, I’m contrasting WAR to draft position, in substitution of AV.

The plots below give the coefficient for each measurement or drill denominated by standard deviation within the position group. The draft positions and WAR for position groups are translated to percentile, giving both the same scale. Each bar below represents the amount of percentile movement you’d expect for a player with one standard deviation above or below the positional average.

The sample for this analysis covers all players who participated in all drills or all but one drill from 2006 to 2019. For players who missed a drill, the value was estimated through a regression on the remaining variables, with a discount applied to the result because of an assumption that the drill was purposely skipped with an expectation of underperformance. Players who participated in the combine and were not drafted are included in the sample with an assumed draft position of 300.

Below each plot, I’ve included a table with the top 15 projections for positional WAR (first three seasons) in the 2006 to 2019 period, including the players’ combine marks and their actual WAR produced. The projections are stated as “percentile,” meaning the estimated percentile ranking at the position for total WAR over their first three NFL seasons. 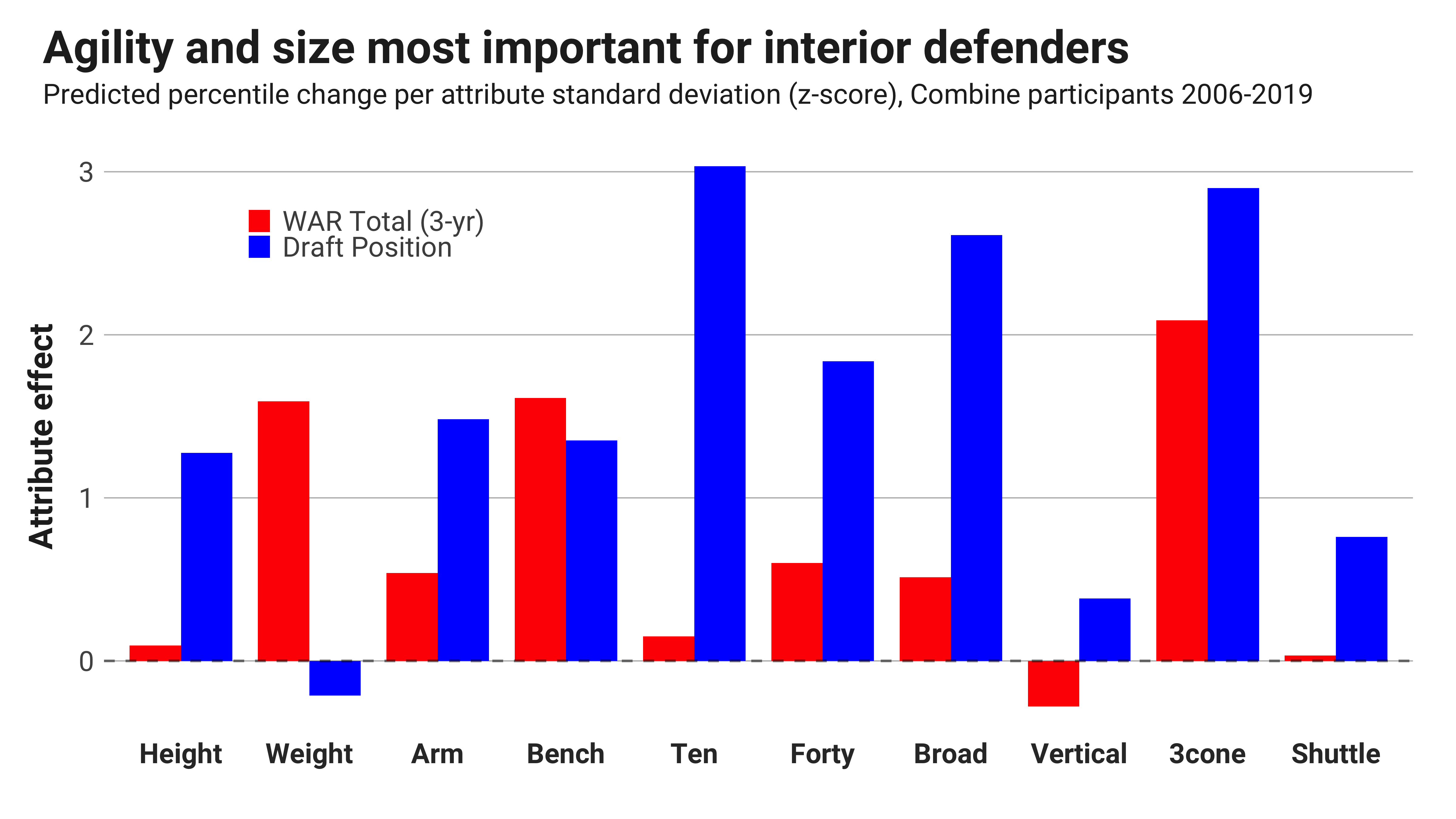 Weight and strength are bigger components of value for interior defenders than you might think in an NFL environment that is increasingly focused on rushing the passer. As base defensive personnel has shifted toward smaller linebackers and defensive backs playing further away from the line of scrimmage, however, the value of bigger, two-gap defenders to plug the middle has increased. The three most impactful traits for interior defender draft status are sprints, the broad jump and the three-cone drill. Only the three-cone drill has a meaningful impact on WAR.

Dontari Poe had the top combine-based WAR projection over the past 15 years at a healthy 346 pounds and 44 reps on the bench press. Poe also posted better-than-expected sprints and jumps after adjusting for weight. J.J. Watt was one of the best to ever do it, and his combine performance hinted at his eventual NFL success. Watt’s three-cone time was more than half a second faster than expected for a 290-pound interior defender. His 6.88-second mark was the second-best weight-adjusted time among 252 qualifying players at the position. 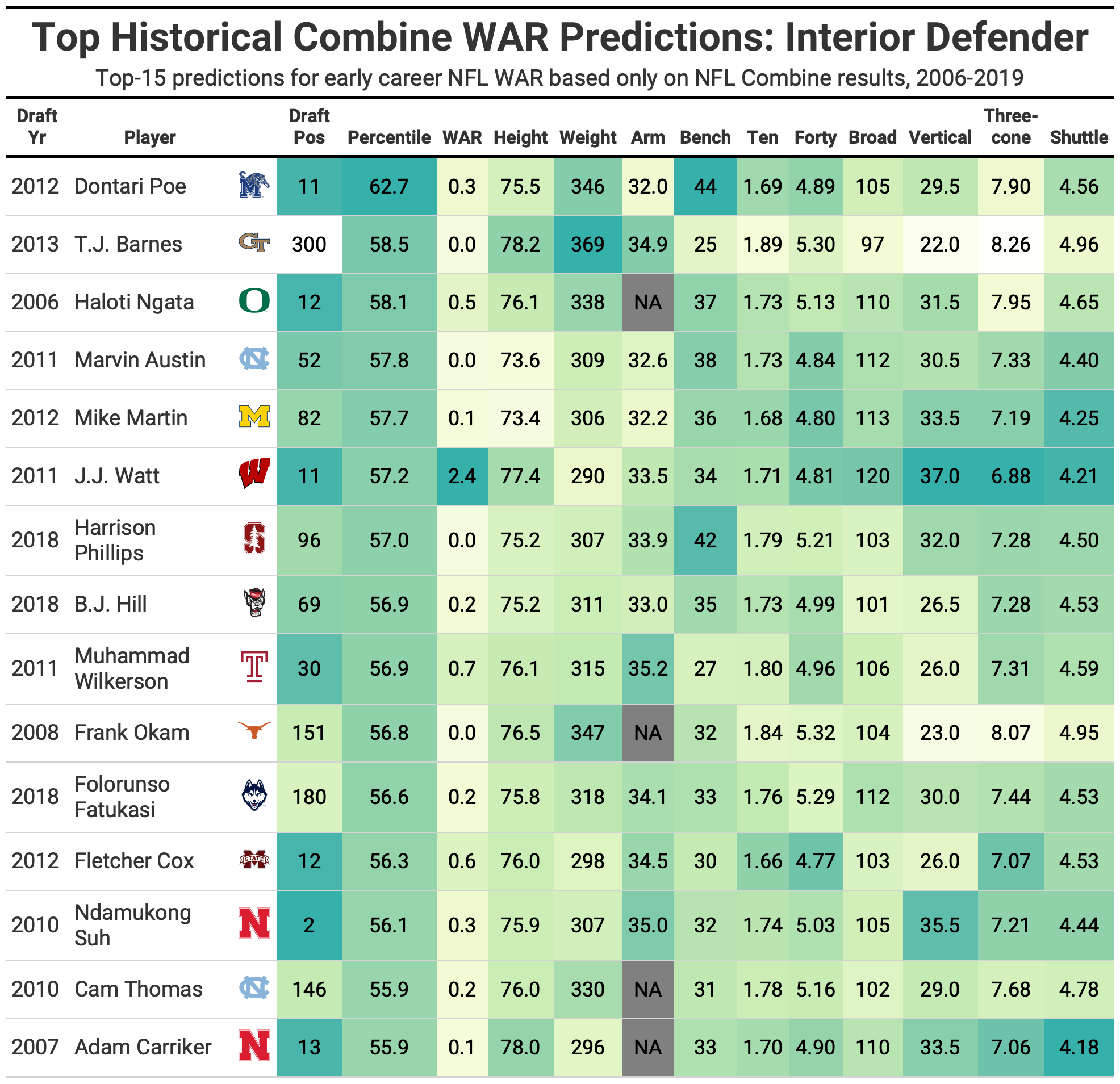 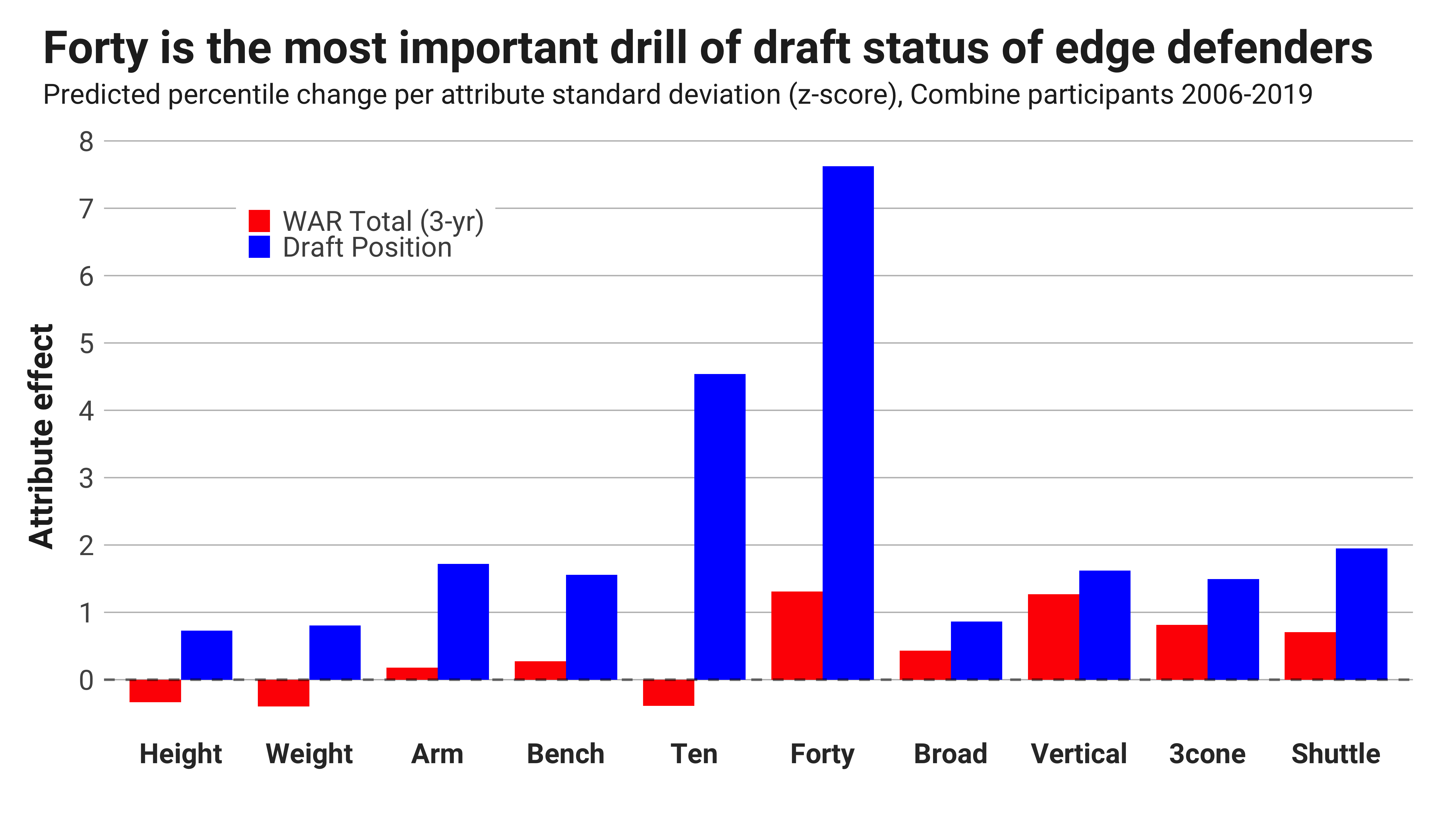 Weight-adjusted 40-yard dash times have the biggest impact on edge defender draft status as any drill for any defensive position. Each standard deviation better than expectation for the sprint moves draft status by roughly eight percentiles. While weight has become more valuable for interior defenders, lighter edge defenders have been more valuable according to PFF WAR, even while NFL teams slightly prefer bigger players at the position.