Senior Bowl week begins on Monday, January 22, and culminates with the 2018 Reese's Senior Bowl on Saturday, January 27. We at Pro Football Focus will be in attendance all week long as several of our Senior Analysts will be on hand for exclusive takeaways, practice videos and immediate reactions to some of the bigger storylines of the week. 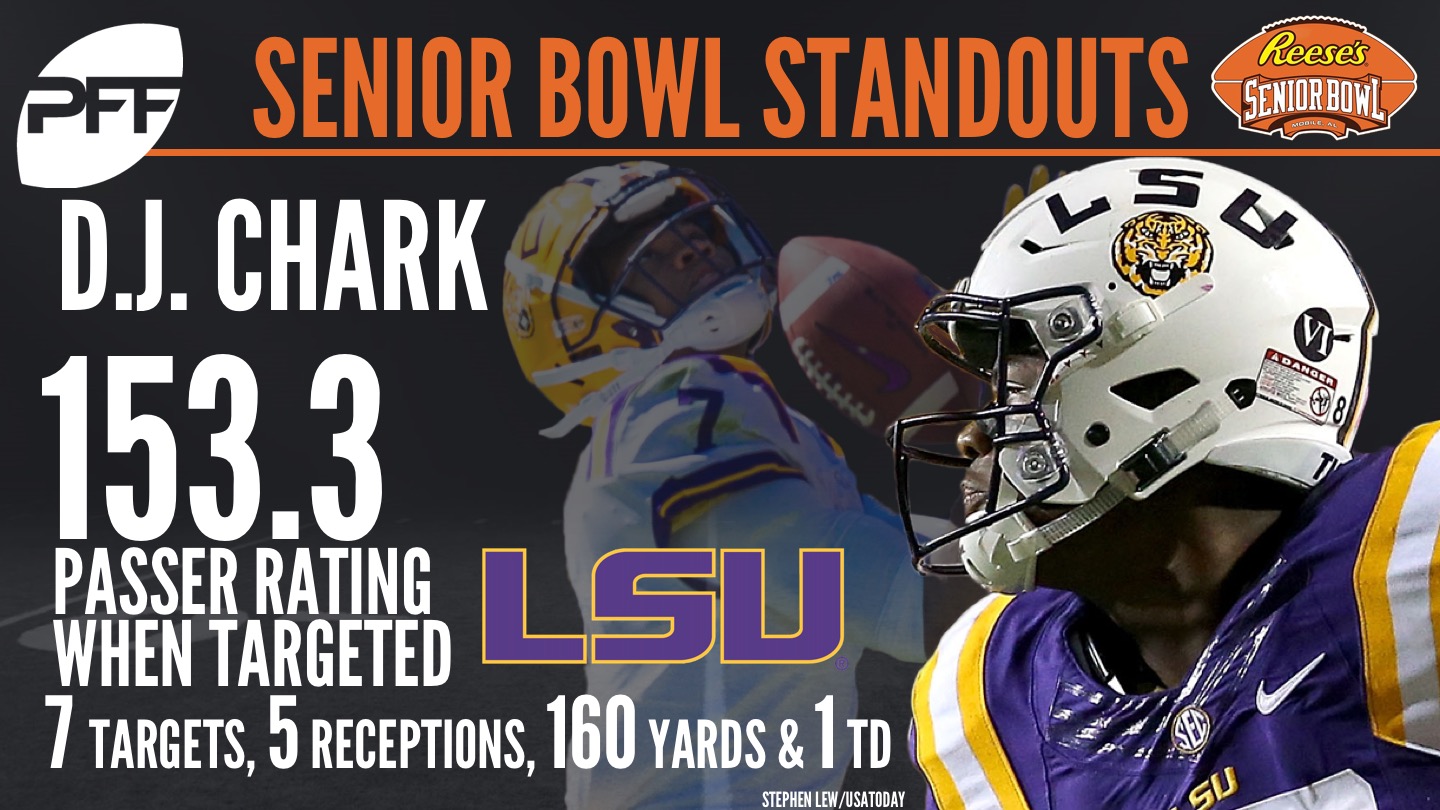 PFF's Jordan Plocher gives a full recap of the standout performances from both sides of the ball during the 2018 Reese's Senior Bowl. Read more… 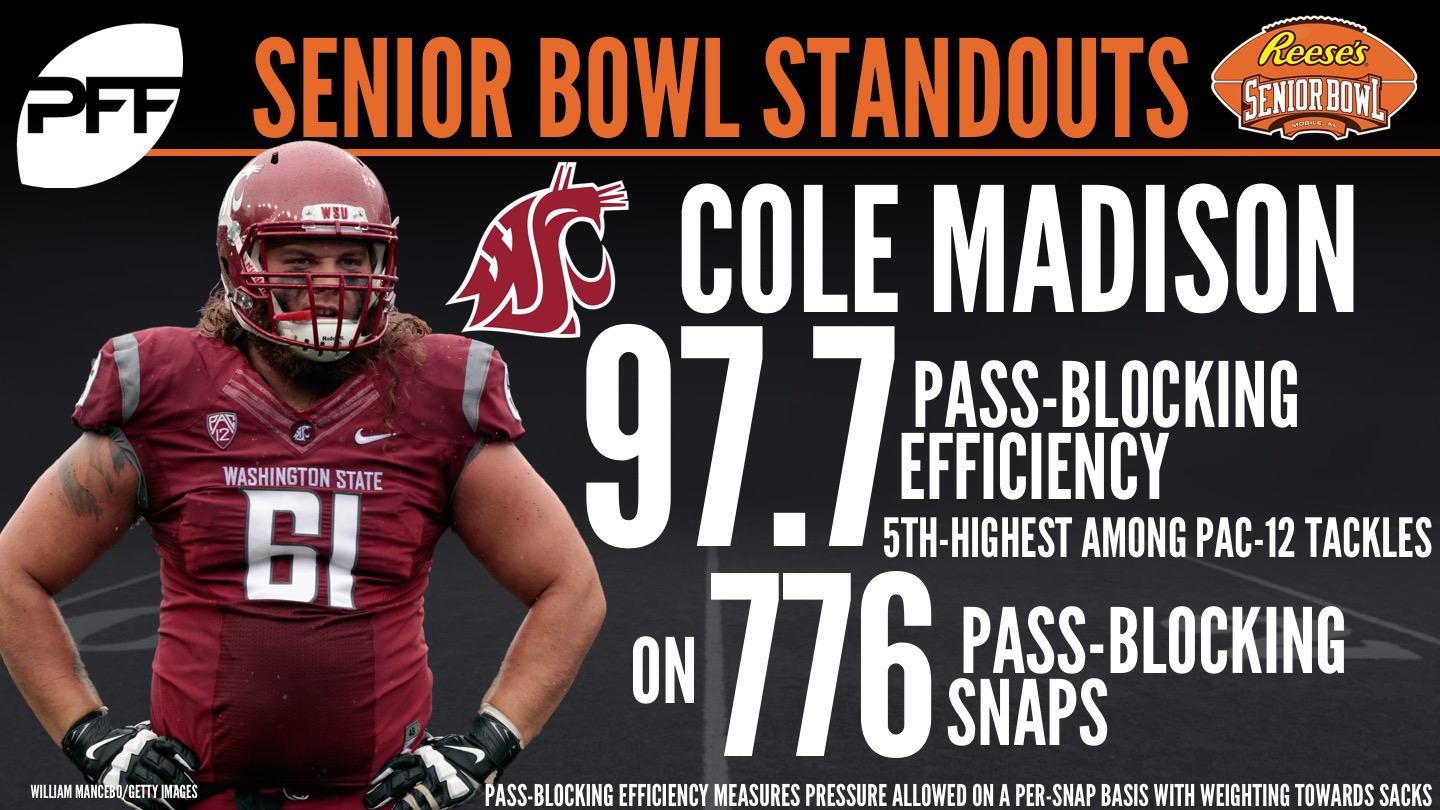 For a full recap of Day 3, PFF Analyst Jordan Plocher gives you his takeaways including some of the small school prospects who jumped out on Thursday. Read more…

Out for Day 3 and the actual game:

Allen Lazard of Iowa State going up against Michael Joseph of Dubuque in the red zone pic.twitter.com/pU6doXUlO5

QB Luke Falk on the move off of play action. He saw a 26.5% boost in his completion percentage after play action last year! #SeniorBowl pic.twitter.com/HyqZXQOTa7

For a full Day 2 recap, check out PFF Analyst Jordan Plocher's takeaways and standout performances from the second day of action in Mobile. Read more…

UCF TE Jordan Akins with the TD! He average 1.91 yards per route run, 12th highest in the FBS during 2017 #SeniorBowl pic.twitter.com/sDrrRdYzs5

Our top-graded QB Baker Mayfield hits NMSU WR Jaleel Scott on an out route on Day 2 of the #SeniorBowl pic.twitter.com/bxRBMsVXKy

Stay up to date on all the #SeniorBowl happenings: https://t.co/B6klQrrDJt pic.twitter.com/PKE6vDweQ1

Boise State @BroncoSportsFB WR Cedrick Wilson averaged the 7th-highest yards per route run among senior WRs this past season, showing off impressive moves on Day 2 of the #SeniorBowl pic.twitter.com/4WD25PtcTu

In 11-on-11 reps, Wyoming quarterback Josh Allen hits Wilson on an intermediate pass placed well, and subsequently overthrows a deep ball for Wilson

Hamilton brings in an intermediate route from Lee, and Washington State quarterback Luke Falk showcases his play action skills that saw him with a 26.5 percent higher completion percentage after a play fake in 2017

Washington State QB Luke Falk saw a 26.5% boost in his completion percentage after play action last year, no surprise he's showing off some of that at the #SeniorBowl today, hitting Notre Dame TE Durham Smythe pic.twitter.com/tE4ADgZNoe

Western Kentucky tight end Deon Yelder has been added to replace two injured tight ends on Day 2. Florida cornerback Duke Dawson is on the field today, after sitting out yesterday with strep.

Out of North practice today:

Out of South practice today: 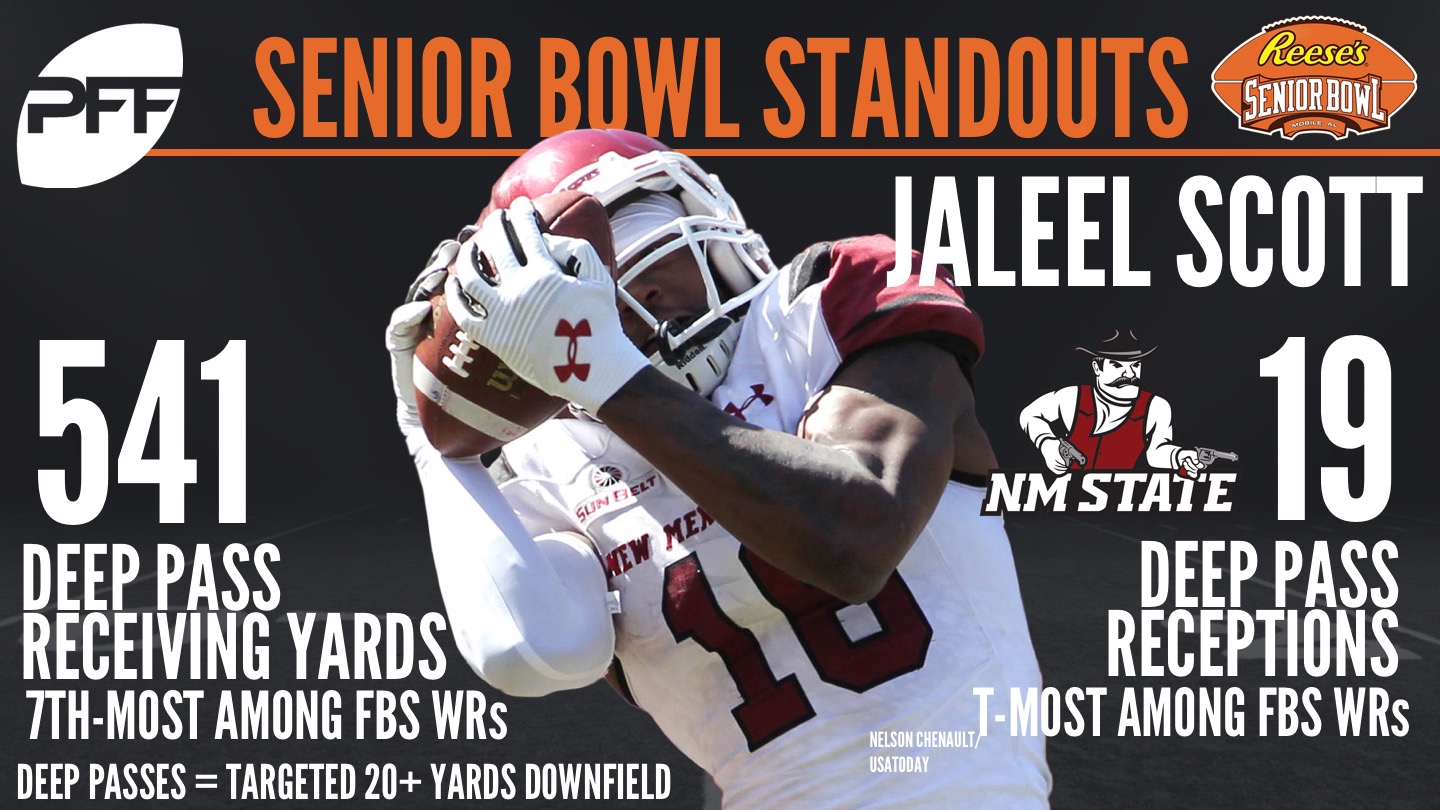 PFF Analyst Jordan Plocher gives his account of the first day in Mobile in his full Day 1 Report. Who won their position battles? Who stood out in 1-v-1 matchups? Who went down with injury? All of that and more…

For the first time, the teams participated in live action with pads and shorts on, officially kicking off the week. Below are our analysts immediate takeaways, from their perspective on the sidelines and in the press box.

Texas DT Poona Ford had an 86.0 overall grade in 2017, 18th highest in the FBS! #SeniorBowl pic.twitter.com/UxveQDOnpg

Levi Wallace working on Byron Pringle out here at the @seniorbowl. Pringle saw the Big 12's sixth-highest yards per route run this year at 2.75. pic.twitter.com/LldJuuxp8E

Marcus Davenport is here at the @seniorbowl. His 15.9 pass rushing productivity ranked third among all FBS 4-3 DEs! pic.twitter.com/chdhPe3QFm

The second-highest graded player among all FBS guards in 2017, UTEP's Will Hernandez (90.1) shows his power during #SeniorBowl drills alongside Michigan's Mason Cole (84.5) pic.twitter.com/YgXUmRdY2n