Oklahoma QB Baker Mayfield was once again one of the more accurate quarterbacks in practice even though his footwork may have been inconsistent at times. Washington State’s Luke Falk displayed more mobility and ability to move in the pocket than he did late in the season for the Cougars, and Falk moved through progressions quickly which at times didn’t allow downfield routes to develop.

Mayfield and Falk appear to be a step above the other North team quarterbacks thus far.

Western Kentucky QB Mike White appeared to be the steadiest and most accurate of the South team quarterbacks once again on Wednesday. White’s practice performance will go a long way in helping his draft grade with teams, as he didn’t have the same caliber of statistical season with a new coaching staff and offense that he had 2017.

Georgia’s Isaiah Wynn was the offensive line star for the South team and was extremely solid in one-on-one pass rush reps. Oregon left tackle Tyrell Crosby stood out in the North team practice not only in run blocking drills but also one-on-one pass blocking drills. Virginia Tech’s Wyatt Teller had a second straight strong practice performance on Wednesday, showcasing his 2017 season was no fluke. 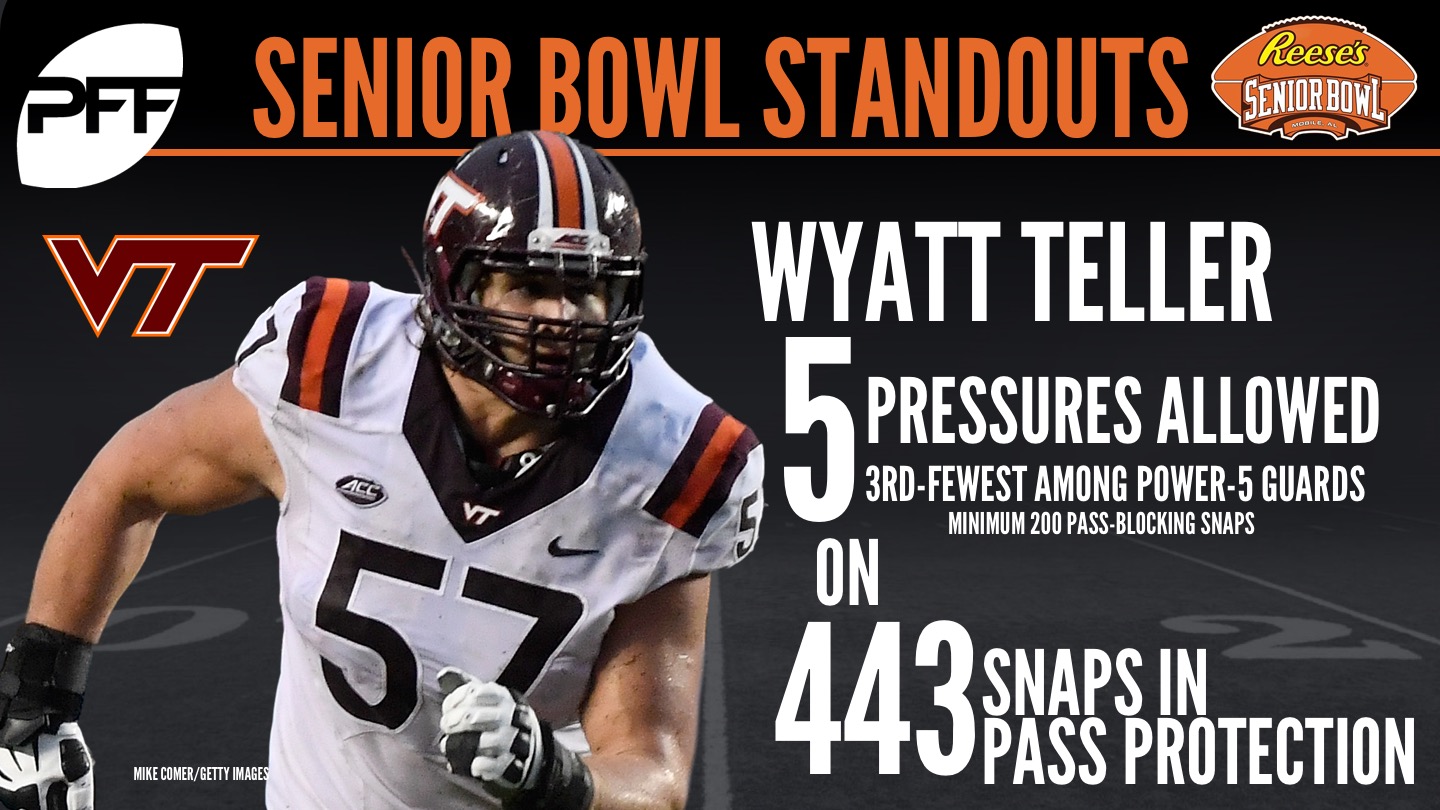 Iowa RB Akrum Wadley and Arizona State RB Kalen Ballage both stood out with their performances in the North team practice. Wadley showed his ability to be a factor in the pass game with soft hands. His brightest moment came when he caught a screen pass and displayed some nice jump-cuts as he weaved through defenders; his speed to the reach the corner on outside runs was also evident.

Ballage's receiving skills have been on display for both North practices this week, as he shows he can be a mismatch weapon in an NFL pass offense. While North Carolina State's Jaylen Samuels is listed as a running back here in Mobile, he still displayed the skills that make him more of an offensive weapon without a truly defined position. Samuels can be used as a move tight end, fullback or halfback but is truly at his best as a mismatch weapon in the pass game. 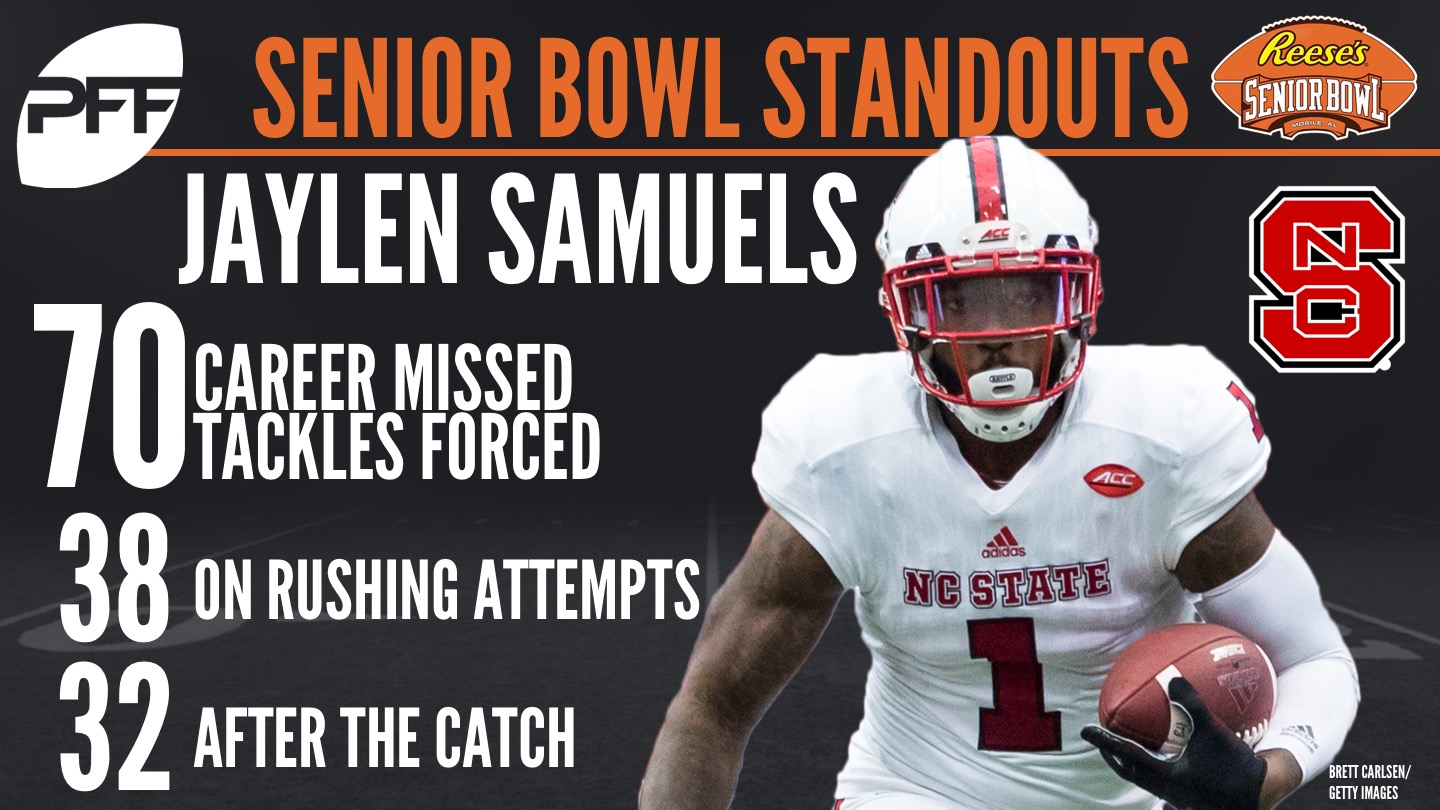 Colorado State WR Michael Gallup had a second strong day of practice and was able to hook up with Mayfield on some nice intermediate level passes. Missouri WR J’Mon Moore also stood out in Wednesday’s South practice, making several catches and displaying the quickness to separate in routes and an ability to defeat press coverage at the line of scrimmage.

Missouri WR J'Mon Moore, who finished 3rd in the SEC with 391 deep receiving yards, showing his speed and control through the catch on a ‘go' route out here at the #SeniorBowl pic.twitter.com/hqnFdke9C8

Penn State’s Mike Gesicki was the North tight end who stood out the most on Day 2 practices. Gesicki consistently made nice catches, including a crossing route from Wyoming quarterback Josh Allen, two receptions over Texas A&M safety Armani Watts and a pass from Mayfield while streaking down the sideline.

UCF tight end Jordan Akins was the star of the South tight end group on Wednesday. Akins was able to beat both safeties and linebackers for big catches. Akins caught a one-handed touchdown from Mike White and beat his former teammate Shaquem Griffen – who slipped in coverage – for a touchdown.

UCF TE Jordan Akins with the TD! He average 1.91 yards per route run, 12th highest in the FBS during 2017 #SeniorBowl pic.twitter.com/sDrrRdYzs5

On the defensive side of the ball

North Carolina State DT Justin Jones won more than his share of matchups in Wednesday’s practice, as his strength was too much for blockers to handle at times. Jones did more than back up his solid performance from Tuesday. Ohio State edge Tyquan Lewis had several good reps in one-on-one pass-rush drills. Rutgers edge Kemoko Turay also stood out in pass-rush drills on Wednesday with his ability to dip around blockers.

Utah edge Kylie Fitts was able to get home a couple of times with a successful spin move while Virginia DT Andrew Brown was highly disruptive in South team drills. Brown disrupted both runs and passes with almost immediate penetration.

South Carolina State’s Darius Leonard came up with some big goal-line plays by getting in on a stop of San Diego State RB Rashaad Penny and denying Ito Smith a touchdown on a flat route by knocking him down short of the goal line. Clemson’s Dorian O'Daniel was solid in coverage and broke up certainly more than one pass on the day.

Oklahoma linebacker/edge defender Ogbonnia Okoronkwo once again stood out in pass-rush drills and was often too much for running backs or tight ends to block effectively.

Hawaii safety Trayvon Henderson had a solid practice for the North team, as he was able to intercept an Allen deep ball and break up a Mayfield pass intended for NC State's Samuels.

West Virginia safety Kyzir White made nice plays in coverage again, but his playing style toes the line between physical and grabby.