It is fully expected that their will be miscommunications between quarterbacks and wide receivers who are strangers to each other in any all-star game format, and that was evident in Tuesday’s practices. On several occasions, quarterbacks threw to spots where they thought the receiver should be, only to have the pass hit the turf.

North quarterbacks as a group were better than the South quarterbacks in regard to accuracy. Wyoming QB Josh Allen was the most inaccurate passer of the day, as he struggled with his ball placement and on several pass attempts, wide receivers struggled with the velocity of his passes. On the afternoon, Virginia's Kurt Benkert was the top-graded quarterback at 74.2, coming in just above Oklahoma's Baker Mayfield, who finished with a 73.4 grade on Day 1.

Wide receivers on both teams struggled with drops on Tuesday as well; however, Colorado State’s Michael Gallup was the star at the position on the day and finished with the highest grade among receivers on Day 1 at 76.4. Penn State DaeSean Hamilton was able to generate separation in his routes while Boise State’s Cedrick Wilson and Miami’s Braxton Berrios both had nice catches on deep passes. 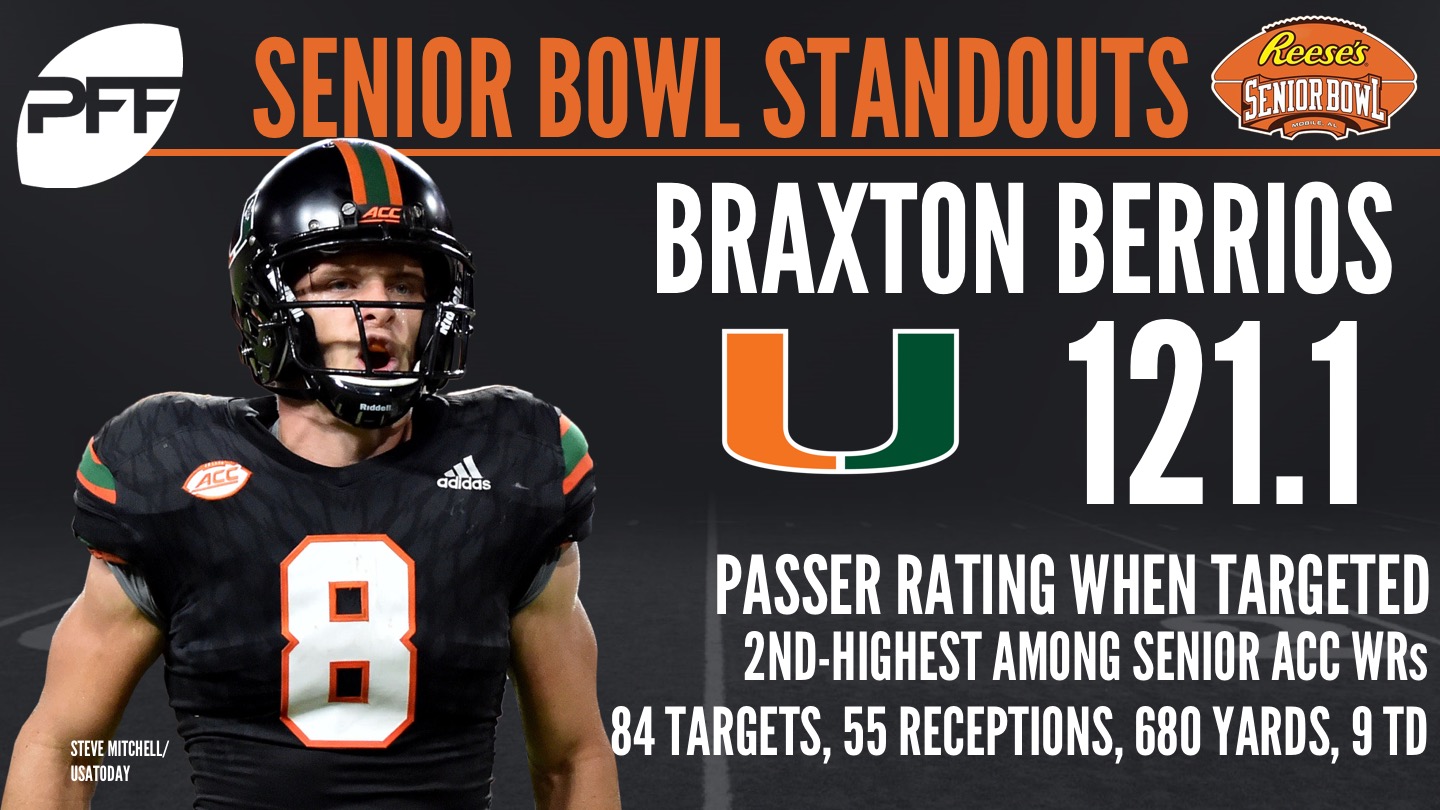 The running backs are somewhat difficult to evaluate on the first day of practice as full contact is not allowed. Arizona State’s Kalen Ballage was one of the better looking running backs on the field and was solid catching passes in practice. Southern Mississippi’s Ito Smith’s quickness was on display as he made several plays during practice. Ballage dominated the day on the grade sheet as well, finishing with a 74.6, clear above the second-highest grade for a running back (62.8, Iowa RB Akrum Wadley).

In offensive line drills, UTEP guard Will Hernandez was beaten by an outside speed rush in his first one-on-one pass protection drill, but he was able to finish strong by taking his man to the ground twice. Hernandez was also able to generate movement in run plays for the North offense. Virginia Tech guard Wyatt Teller was also solid on the day, and his movement skills were on display during zone run plays in particular. Oregon tackle Tyrell Crosby also looked strong in drills and didn't lose a single one-on-one battle. 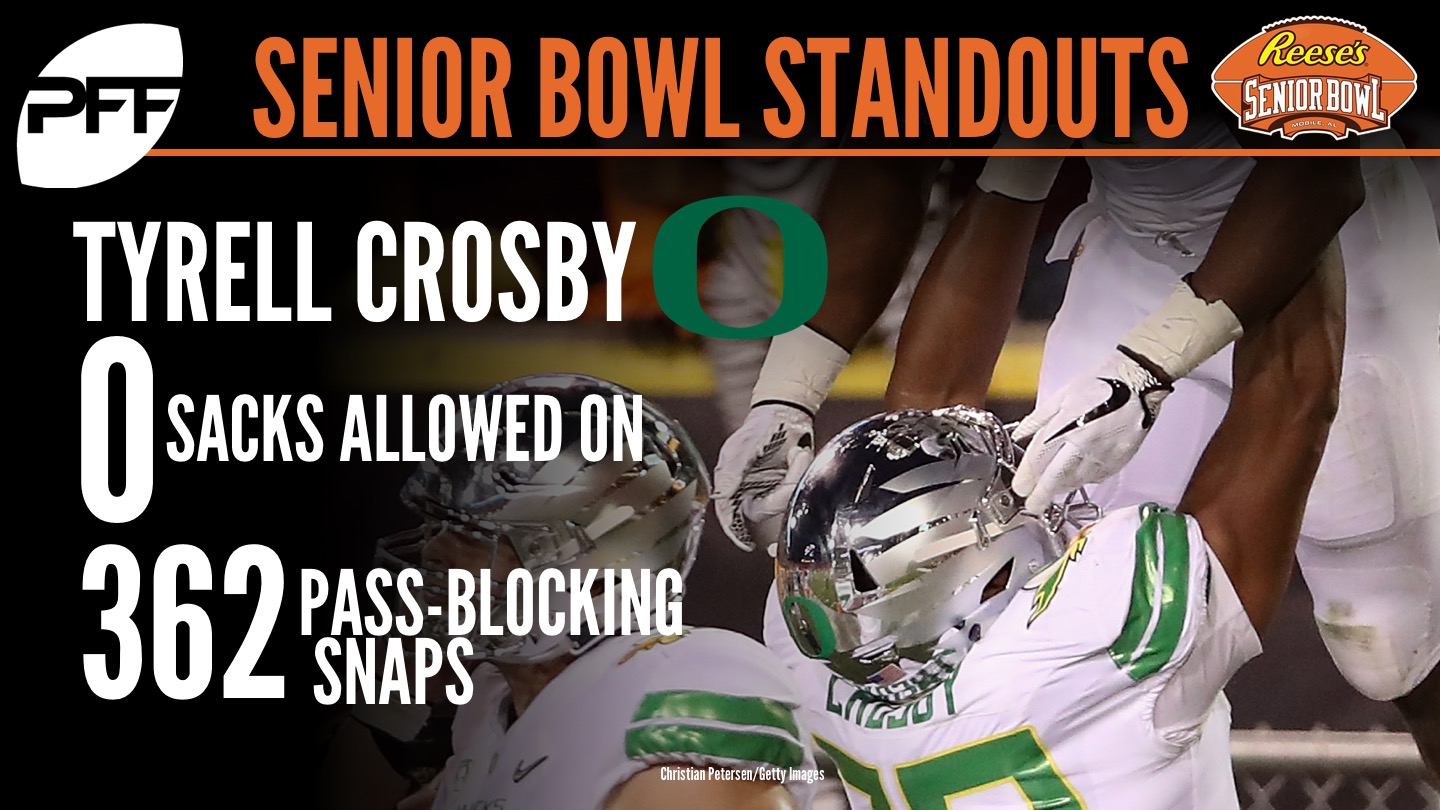 The tight end group is quite talented and the position group had one of the better days of practice on Tuesday. Unfortunately, the talent pool suffered some losses today, as South Dakota State’s Dallas Goedert and UMass' Adam Breneman both left their first practice early with hamstring injuries. Wisconsin’s Troy Fumagalli had a nice one-handed catch to round out the day for the position group.

Alabama defensive tackle Da’Shawn Hand’s strength and ability to control blockers were evident throughout Tuesday’s practice, and he was the top-performer for the South’s defensive line. UTSA’s defensive end Marcus Davenport struggled with bouncing too upright during drills, which allowed offensive linemen to get their hands on his chest and control his movements.

North Carolina State interior defender Justin Jones displayed a well-defined physique for a defensive tackle at the weigh-ins and then impressed in practice as well with his combination of power and quickness at the snap, making him difficult to block for interior offensive linemen.

Linebacker Ja’Whaun Bentley from Purdue set the edge well on run plays when he was lined up over a tight end, and USC’s Uchenna Nwosu made plays as a run defender and earned a “sack” during practice. In the end, it was the usual cast of characters with the highest grade among the defensive front seven, as Nwosu took the top grade of the day across any position at 82.8 and Oklahoma's Ogbonnia Okoronkwo finished with the second-highest grade among front seven players, and third-highest overall, at 80.8.

West Virginia safety Kyzir White had a strong day with a breakup of a Baker Mayfield pass intended for Penn State’s Mike Gesicki and an interception off of Nebraska’s Tanner Lee. White finished tied with Nwosu for the highest grade of the first day of practices at 82.8.

Texas A&M’s Armani Watts had a pass broken up and a nice interception on the day to close the afternoon's practices. 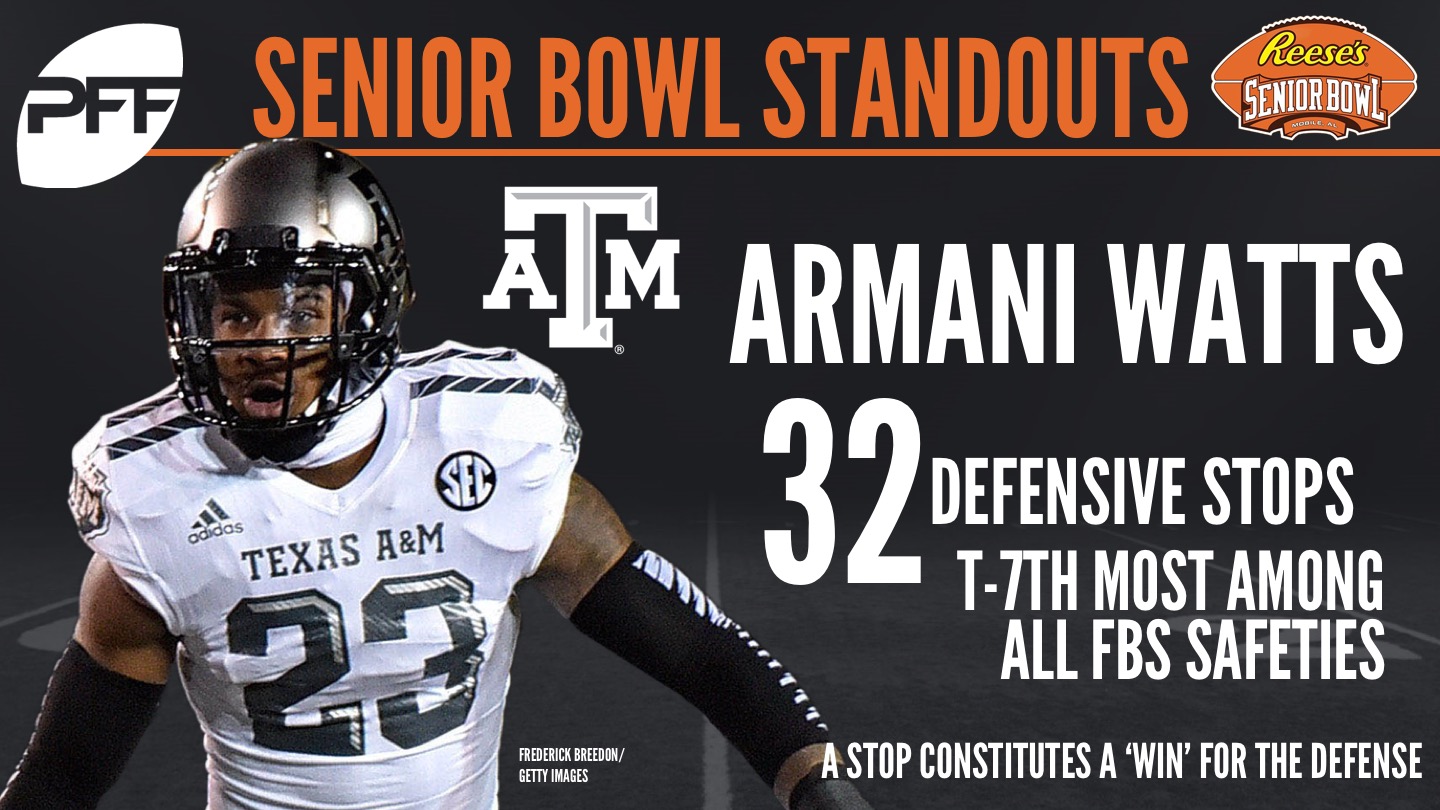