A couple weeks ago, I introduced my opportunity scores model, which combines a few metrics for position group strength with best ball average draft position (ADP) to quantify which teams have the most opportunity for rookie wide receivers and running backs in 2020.

Below, I’ll update the opportunity scores for both position groups and highlight the teams that drafted a wide receiver or running back in the first round. Unsurprisingly, most of the selections were by teams lacking the position, though not all. I’ll also walk through the ADPs of the position group each selection is joining, highlighting whether the rookie addition should slot in immediately as a strong producer with a clear window to WR1 or RB1 status in the near future.

The Raiders harken back to Al Davis’ love of speed and grab Ruggs, whose 4.27 40-yard dash was the talk of the NFL Combine. Ruggs’ ADP has risen this offseason, though he still was seen as a distant third fiddle at WR53 in best-ball draft to Jerry Jeudy and CeeDee Lamb heading into the first round. 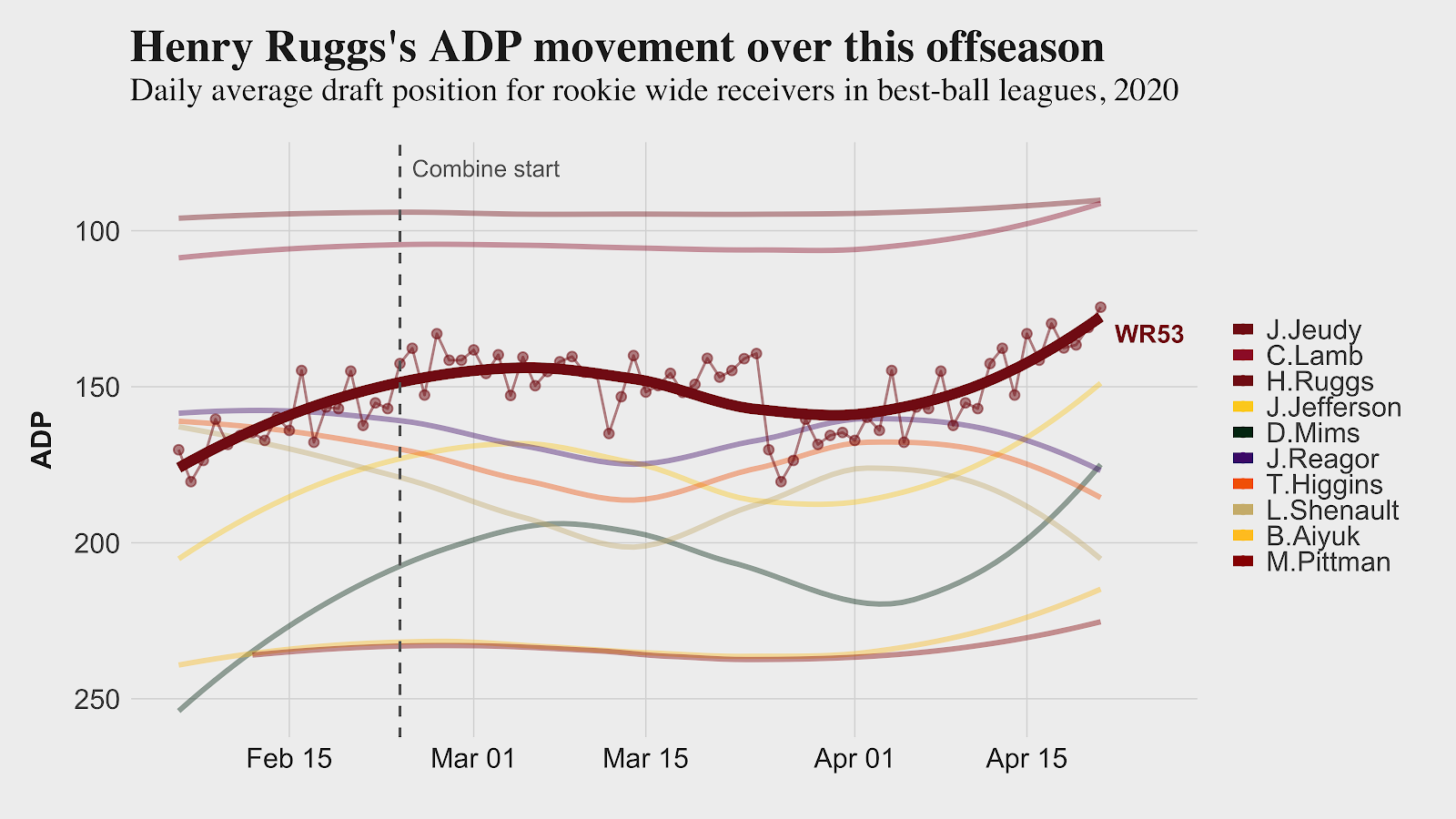 Even if you think Ruggs doesn’t profile as the high-volume receiver that dominates fantasy football, you still have to like the opportunity in Las Vegas. In fact, the Raiders are the top team for rookie wide receivers according to opportunity scores. 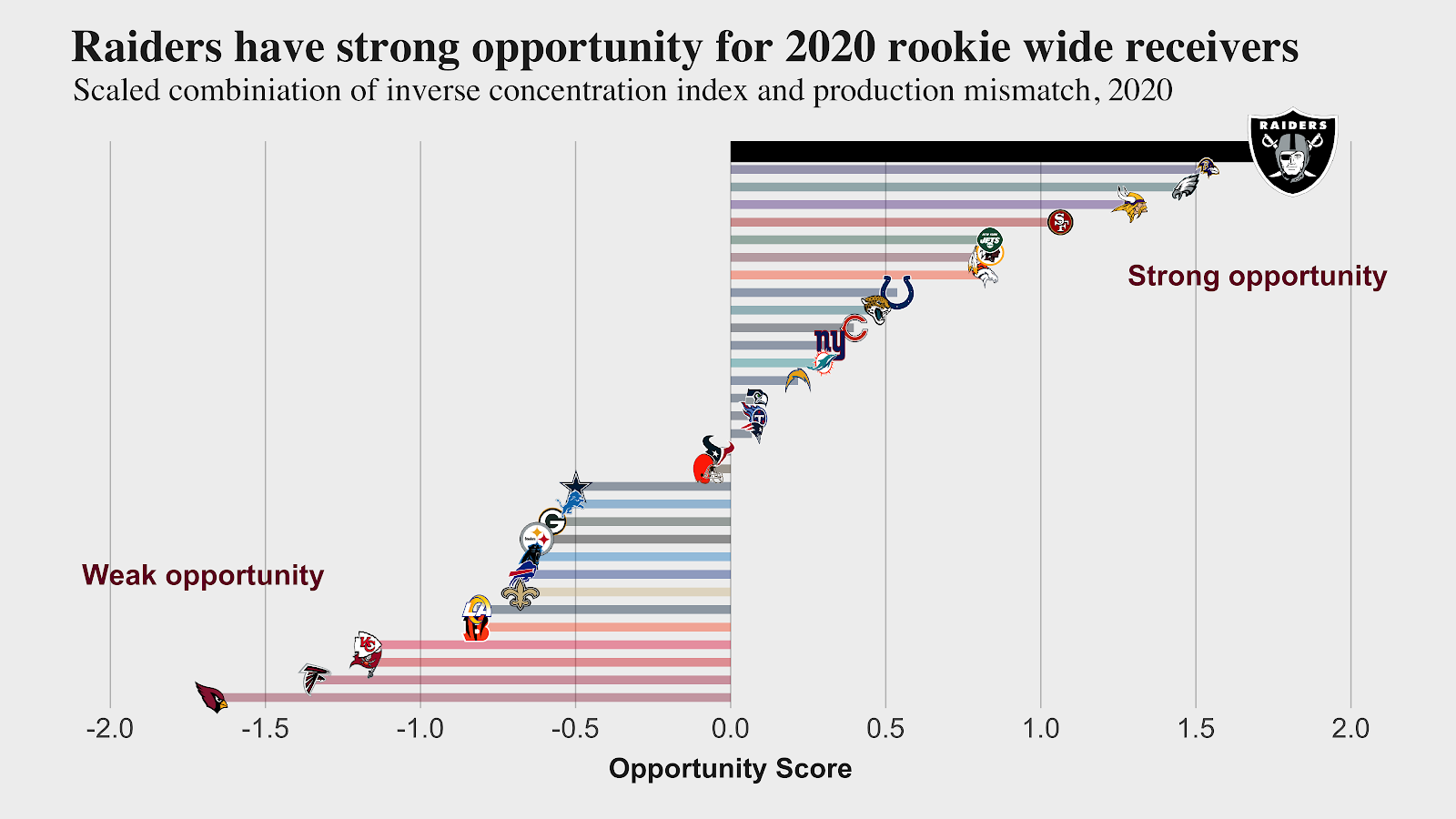 The driving factor in the Raiders’ strong opportunity score for rookie receivers isn’t expected brilliance at quarterbacks, but instead the lack of dominant receivers currently on the roster. 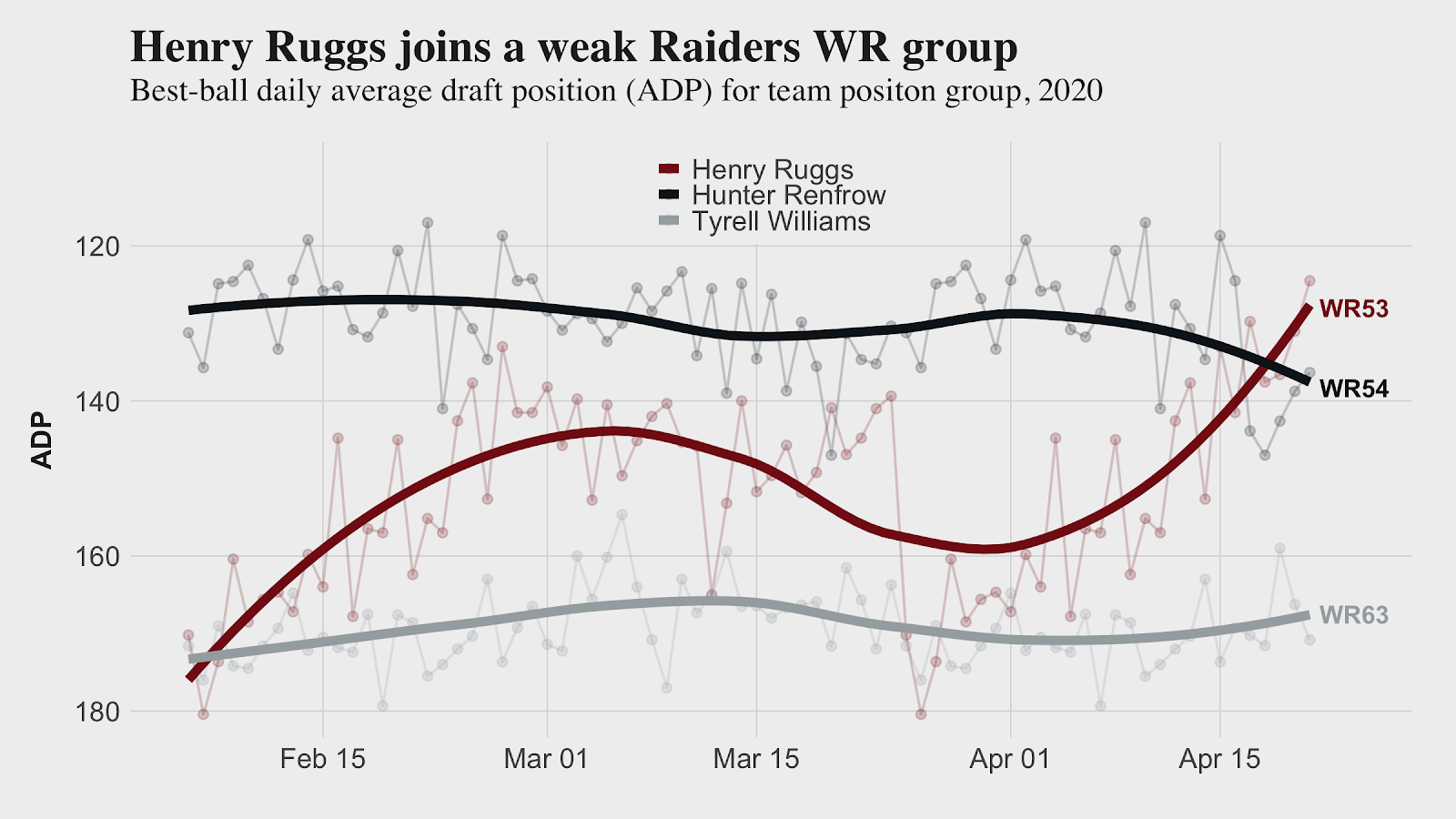 Ruggs steps in immediately as the WR1 for the Raiders in terms of ADP, with lots of upside now that his lack of competition is solidified in the landing spot. Hunter Renfrow and Tyrell Williams had extremely weak ADPs going into the draft, and they would have likely been lower if not for the possibility that the Raiders would pass on wide receiver and leave them with available targets.

Jeudy was commonly mocked as the first receiver off of board, and usually earlier than the 15th selection. Best-ball drafters agreed and made him the top wide receiver drafted the entire offseason, though only at WR39. 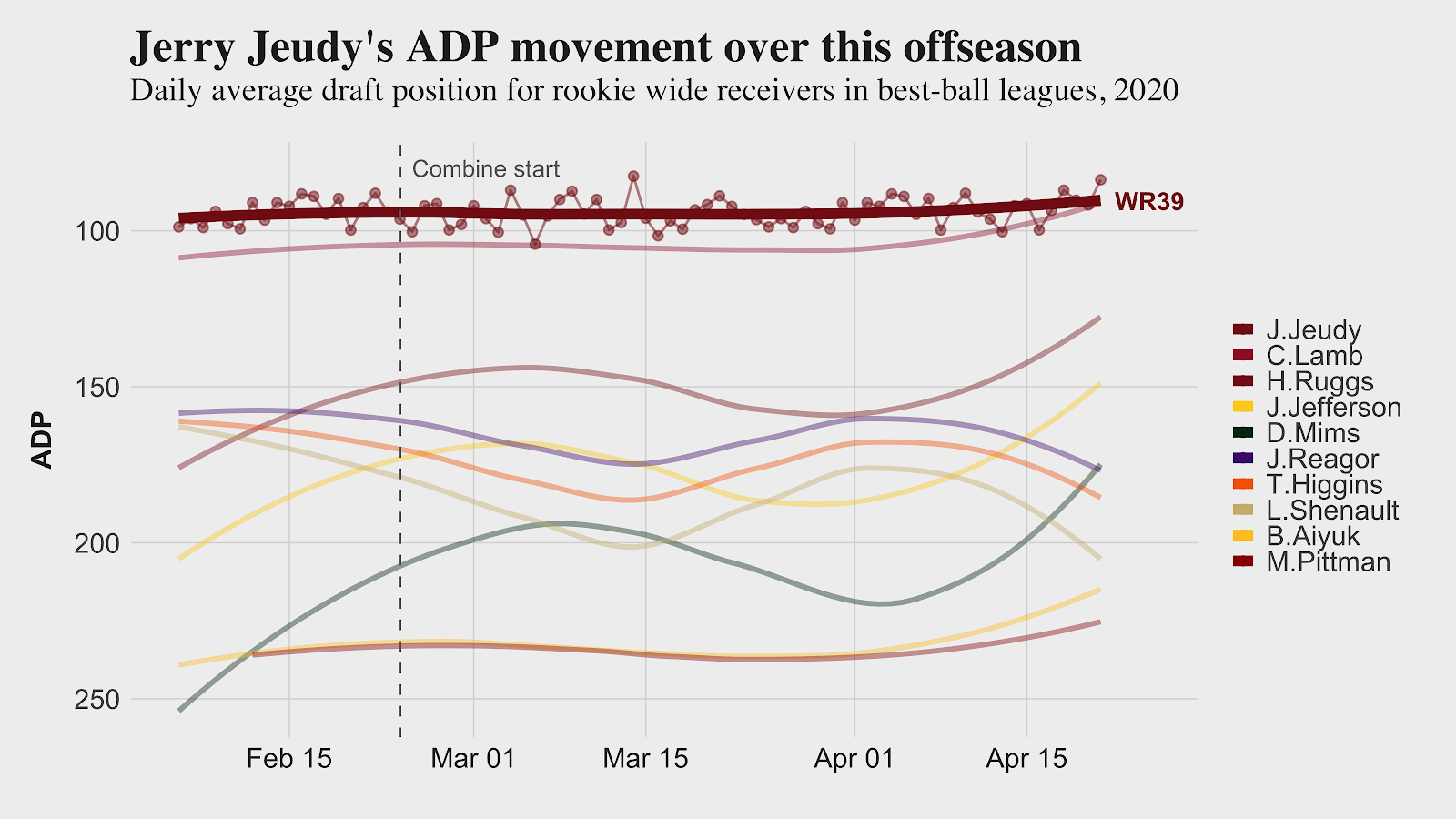 All else equal, you wouldn’t want a receiver to go later for potential opportunity, but in this case the landing spot makes the wait worth it. The Broncos ranked eighth in opportunity score going into the draft. 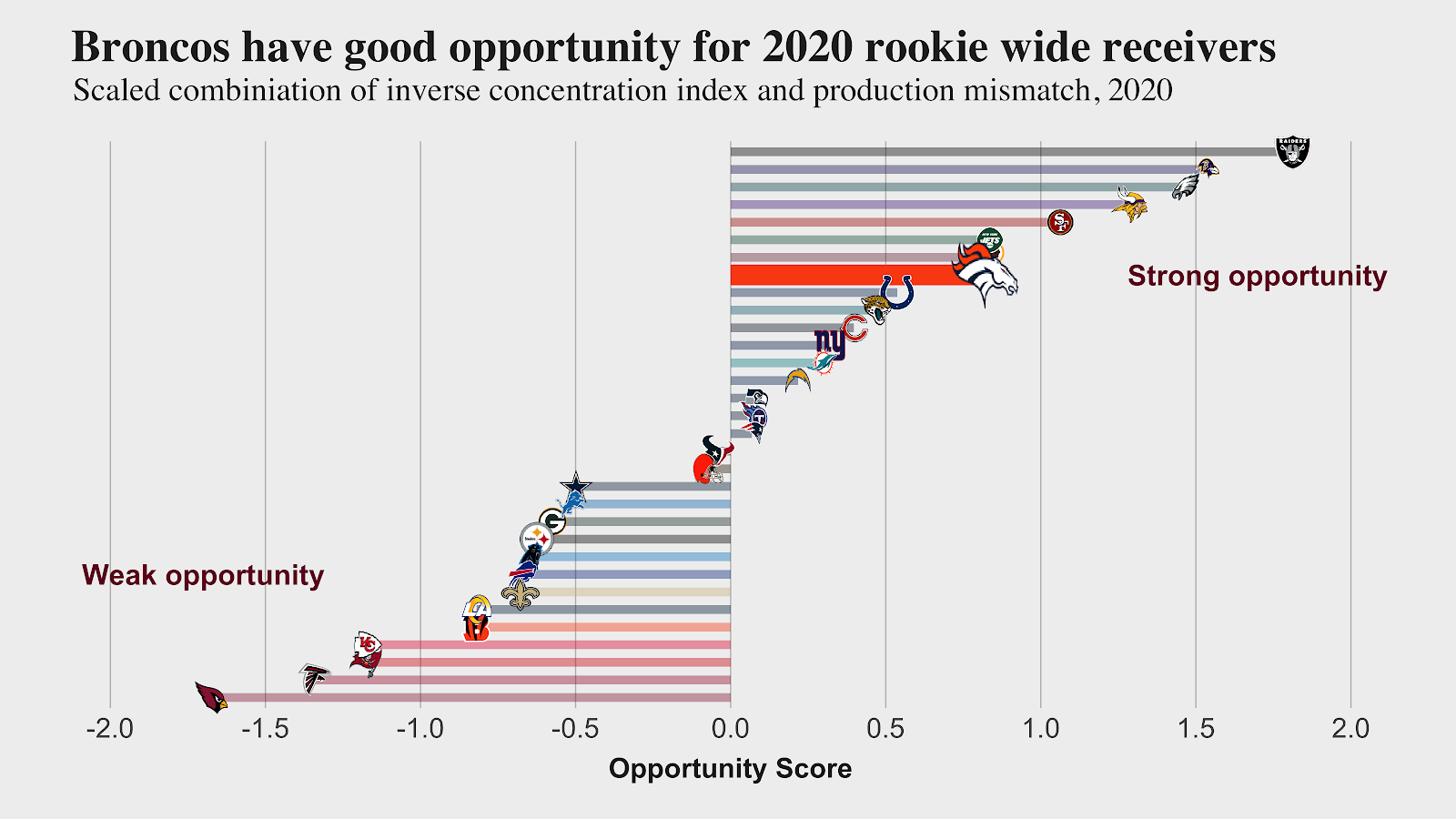 While you might expect a higher score for a team with such an obvious need at wide receiver, the calculation factors in the projected target dominance of the team’s WR1 going into the draft, and Courtland Sutton is significant competition on Jeudy’s path to WR1 status. 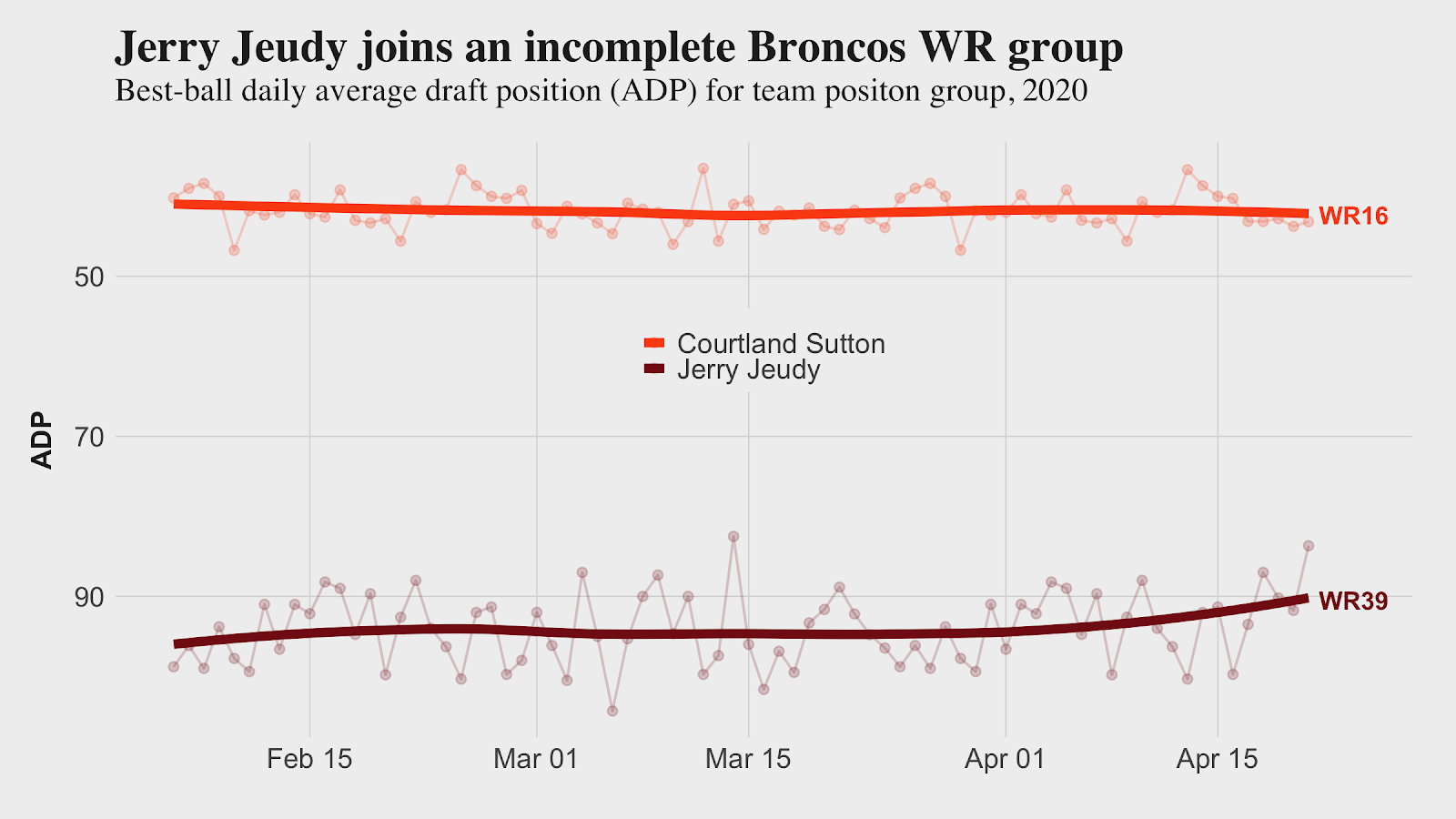 Down the road, Jeudy could still become the Broncos’ WR1, but as of 2020 it’s likely to remain Sutton, whose WR16 ADP will likely fall with Jeudy’s addition. Combine the competition from Sutton with a highly questionable quarterback situation and you have a good, not great, landing spot for Jeudy.

Lamb has been a best-ball riser in recent weeks leading into the NFL draft. He didn’t match Jeudy at WR39, but came close at WR41 in the last week. 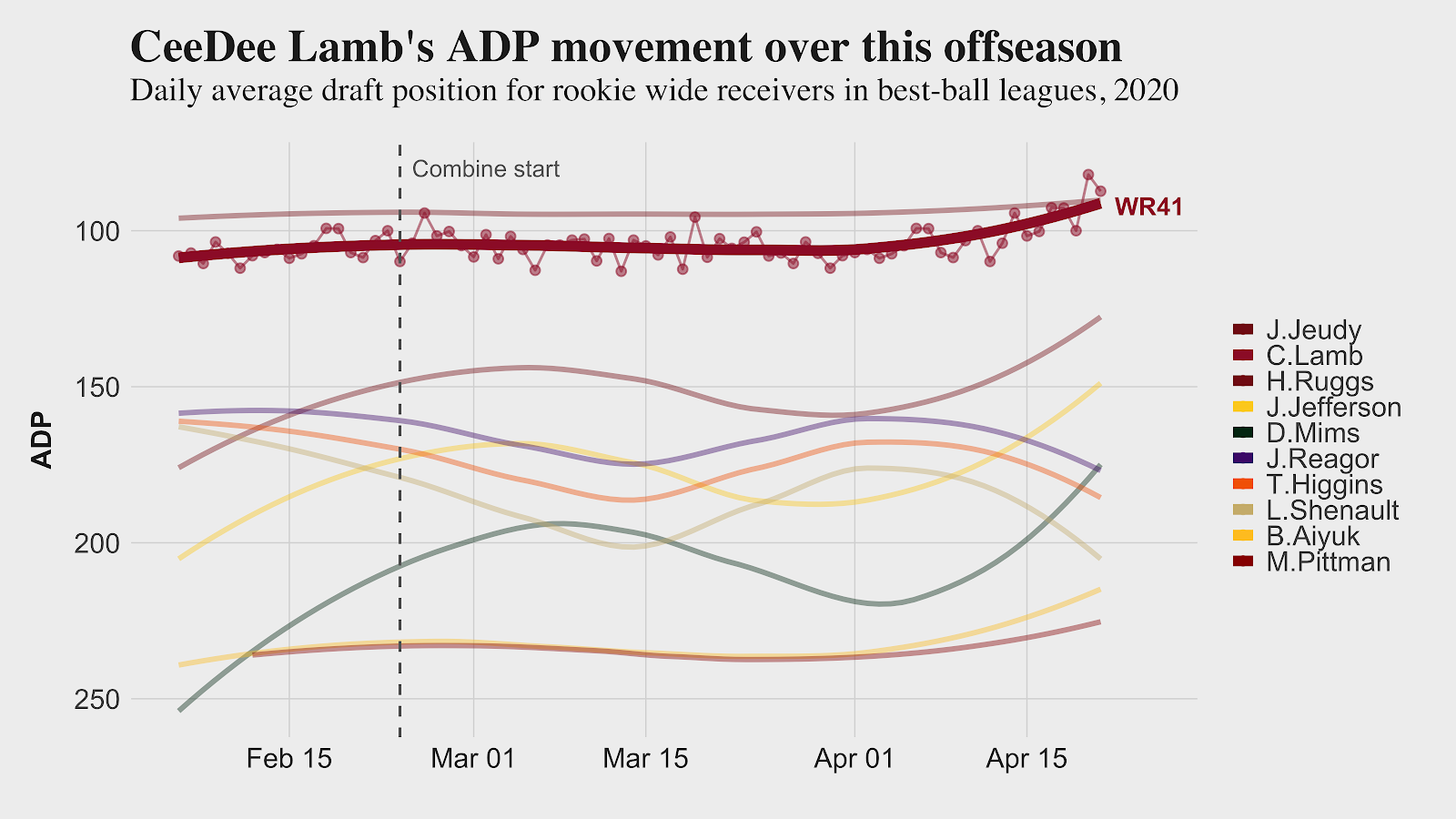 Despite the strong passing attack last season for Dak Prescott and Cowboys, opportunity scores aren’t in love with the landing spot. The Cowboys score negatively, though not at the bottom of the scale. 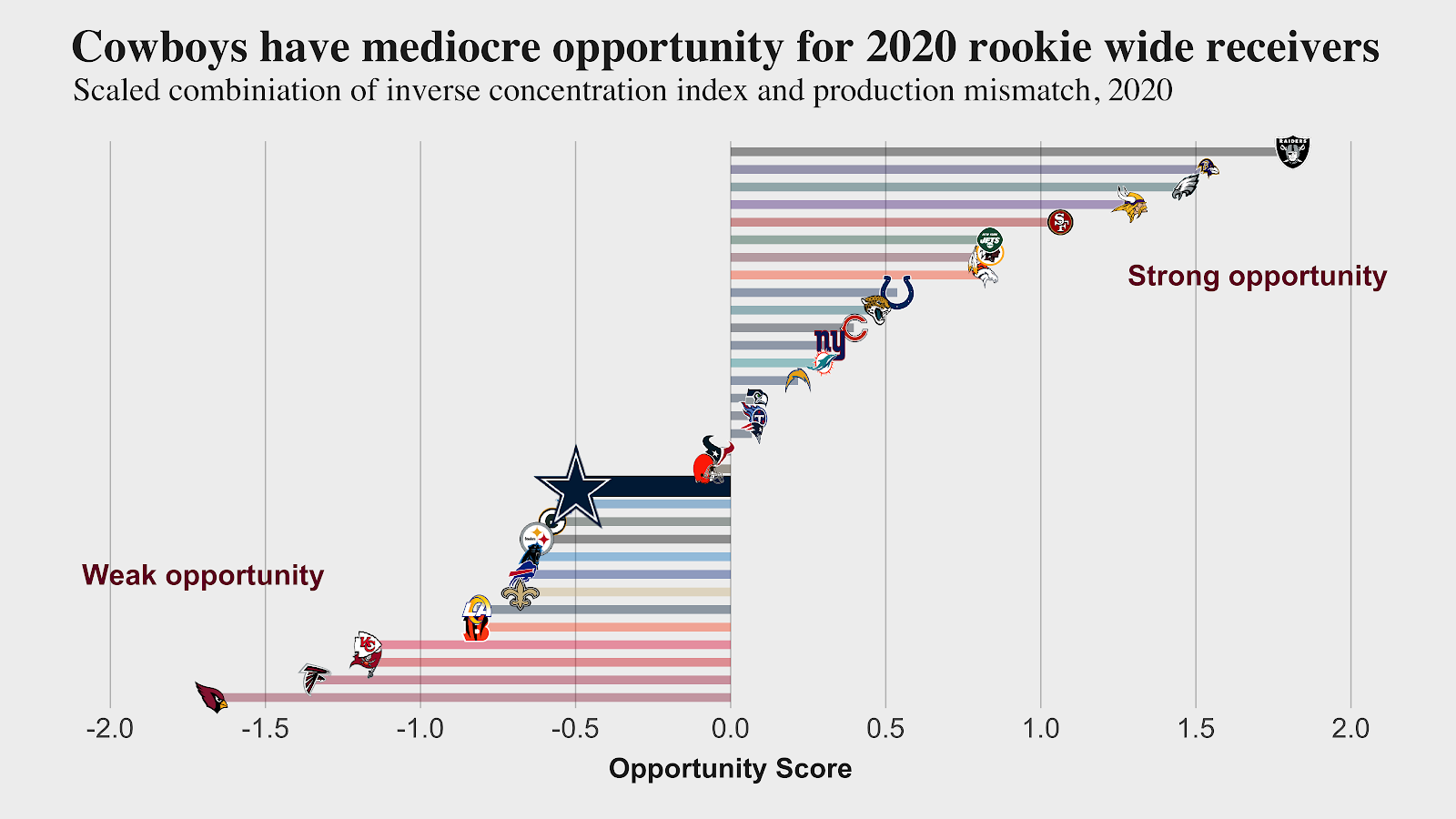 The reason the Cowboys are judged harshly by opportunity are the strong ADPs of their receiver group going into the draft. Amari Cooper was all the way at WR8 and Michael Gallup was also a top-30 wide receiver. Those ADPs will likely fall somewhat, with little expectation for the Cowboys adding a top wideout built into those prices.

Where Lamb will go from here is tough to say. Cooper hasn’t been the target hog you’d expect for a player drafted so early, so there’s an outside chance that Lamb could quickly move into the WR1 position on the team. The ADP most likely to move as a result of the draft is Gallup’s, who should fall in anticipation of Lamb stealing the WR2 role, and he could become a value as a consequence. 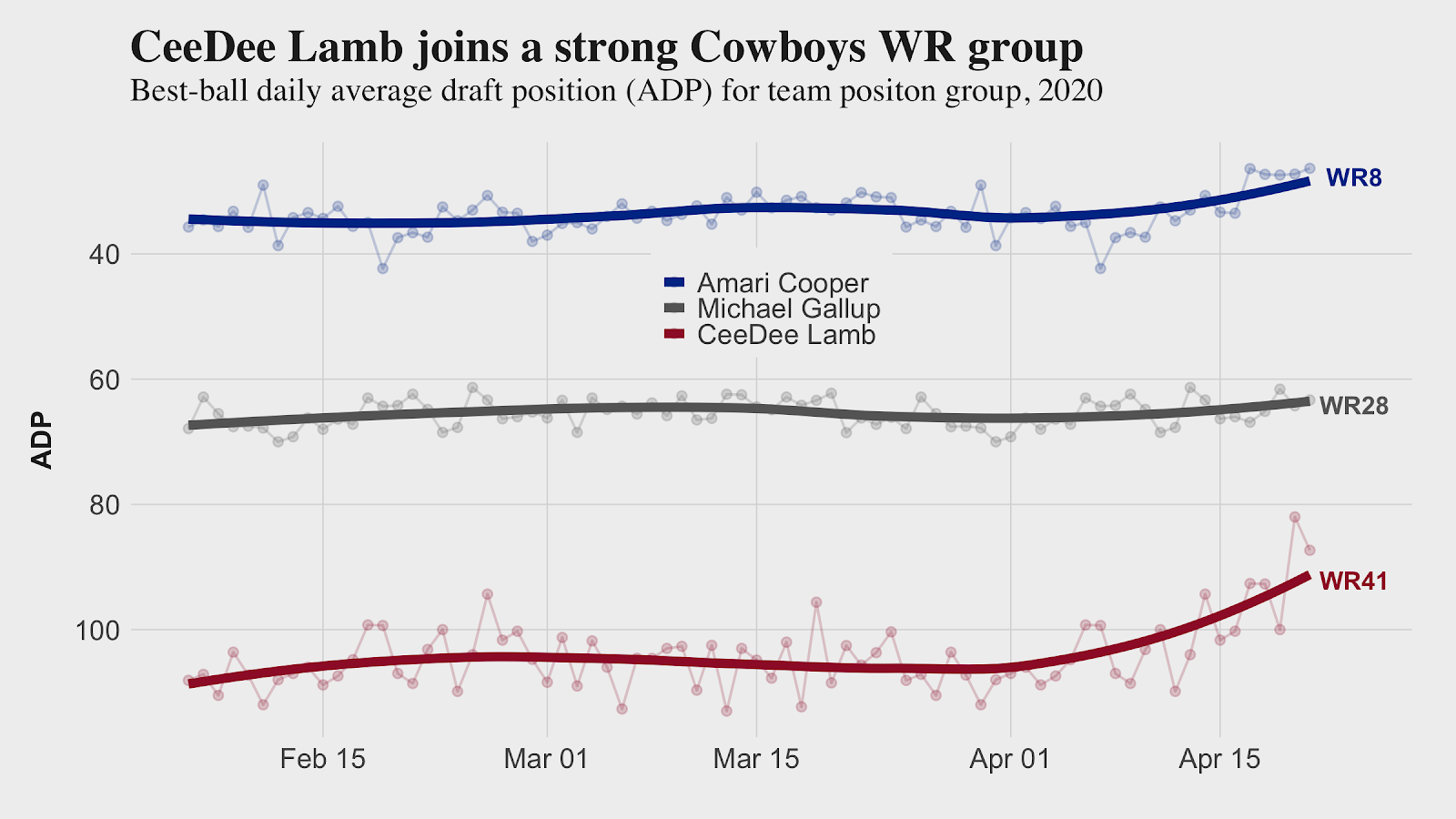 Twenty-first overall was on the early side of expectations for Reagor, whose ADP has fallen from the rookie WR3 to start the offseason to WR6 entering the draft. We should expect his ADP to rise relative to others after going third in the NFL Draft to a favorable landing spot. 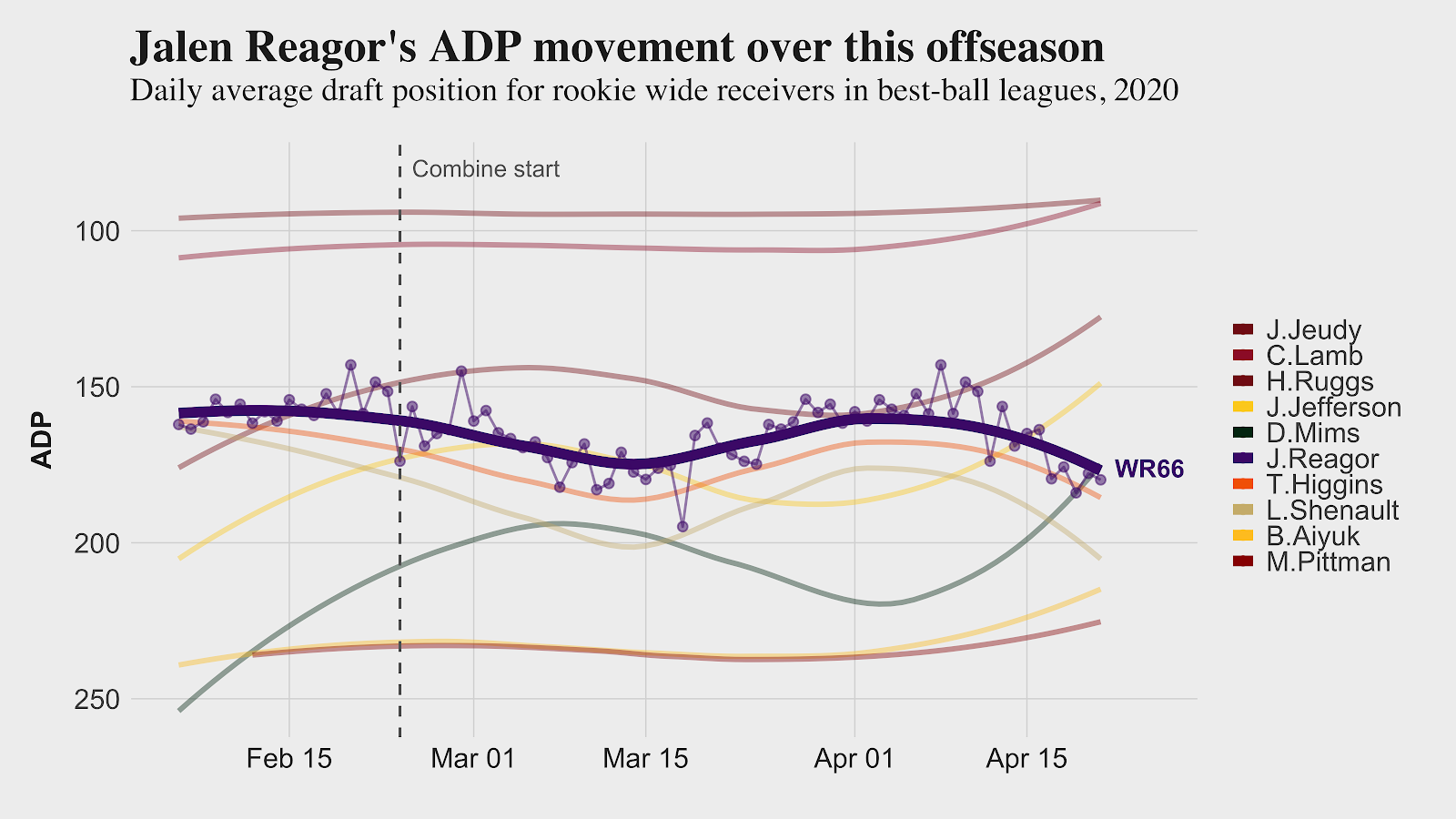 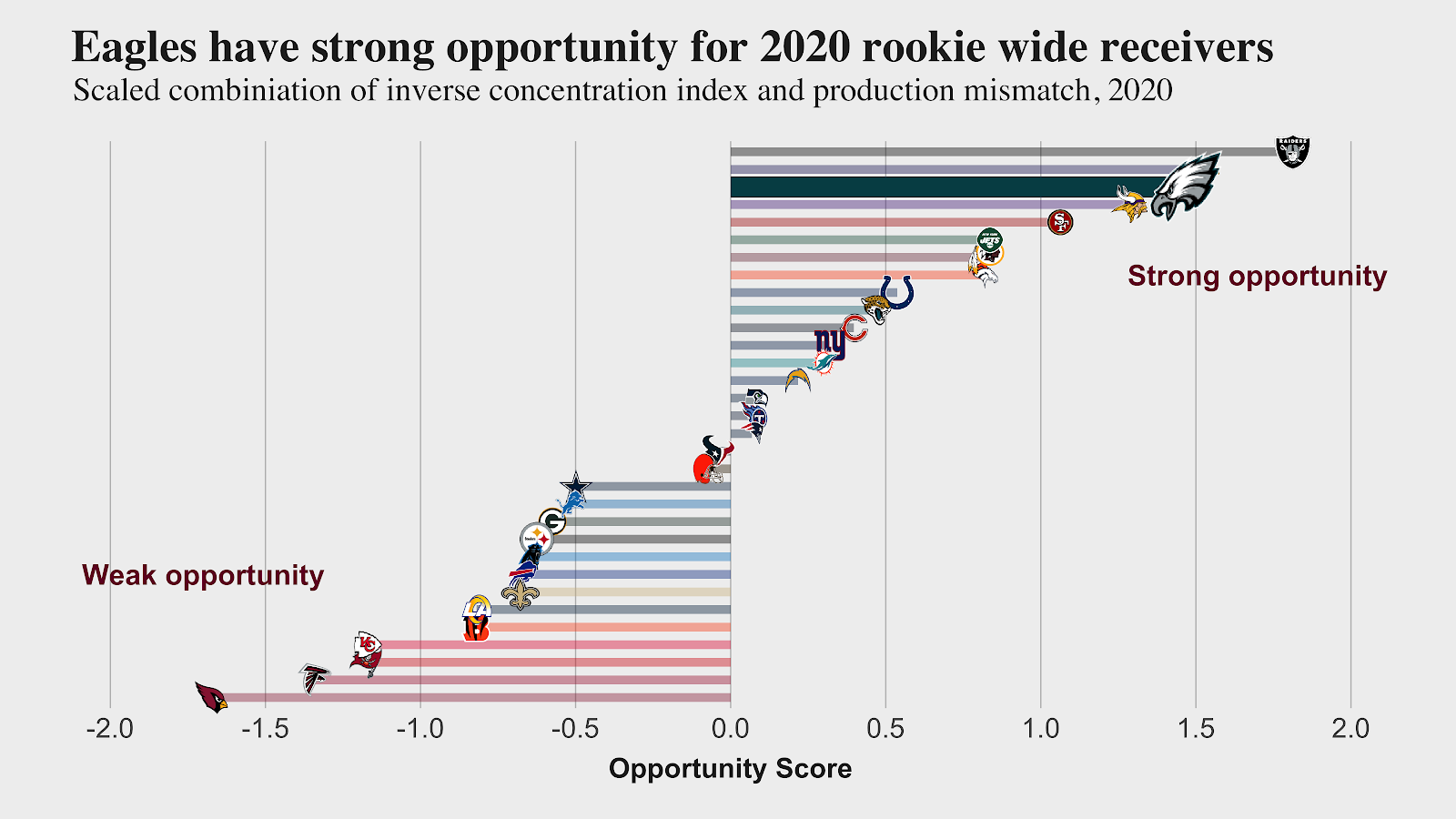 DeSean Jackson’s ADP has risen recently, but he’s still a very weak team’s WR1 at an ADP of WR57. Alshon Jeffery is also discounted heavily by fantasy drafters at WR65. It wouldn’t be shocking to see Reagor lead the group in ADP by the end of the summer, but his valuation will be highly dependent on offseason news and the ability of rookies to gain experience and practice with their new teammates. 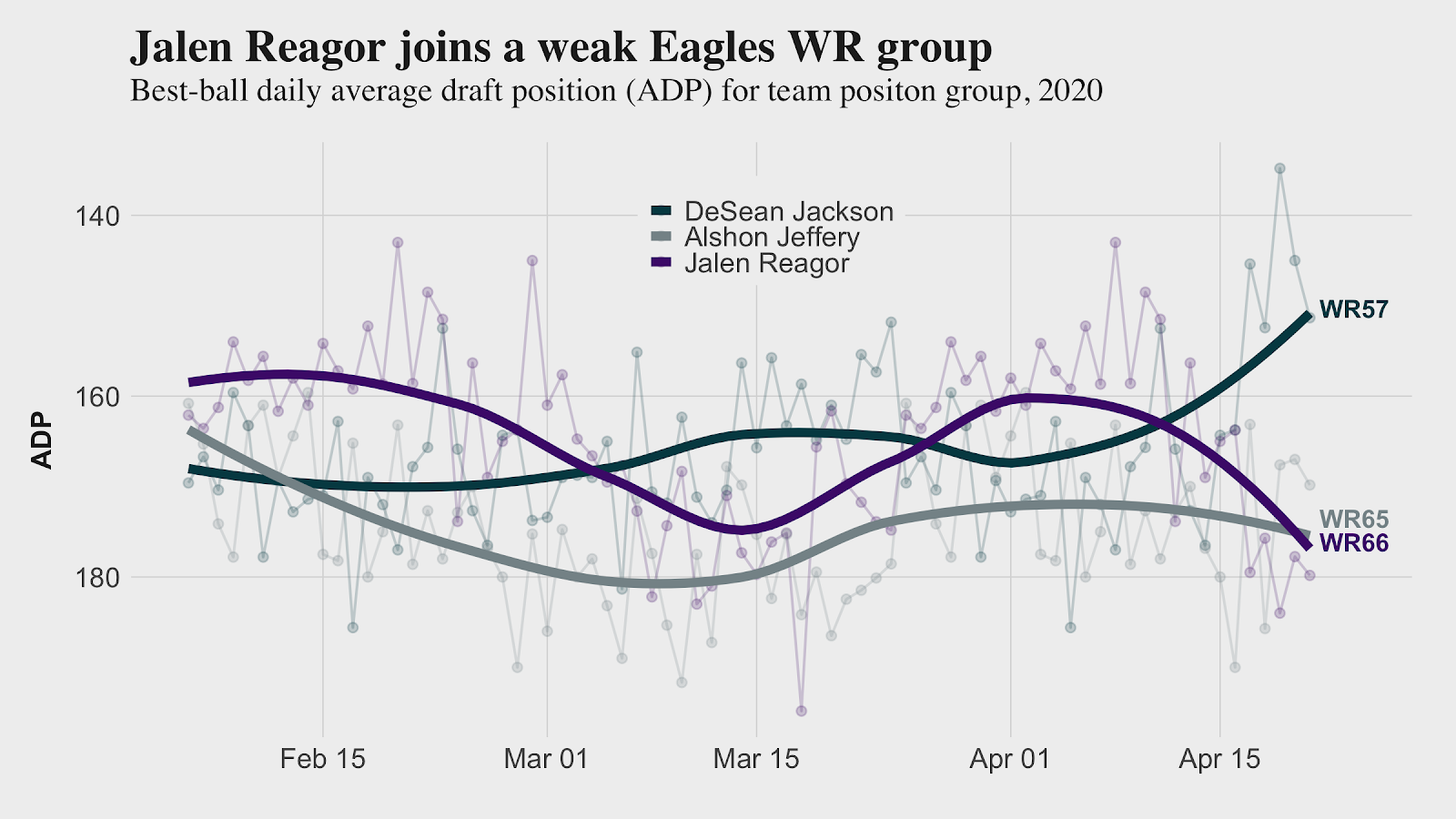 Jefferson was widely assumed to be the third wide receiver taken in the draft, and he was the biggest positive ADP mover so far this offseason, making it all the way to WR61 in the last week. 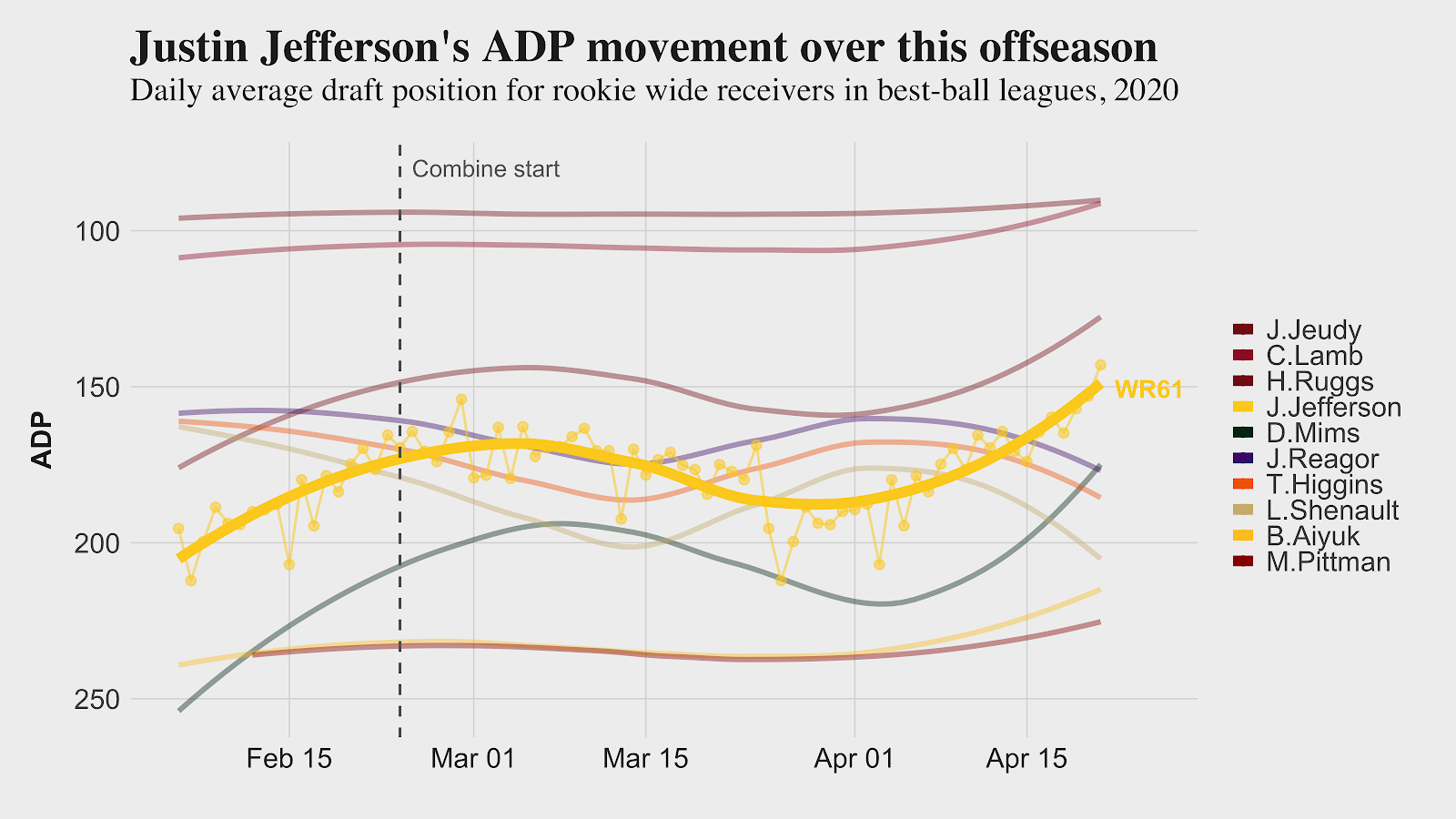 Going at 22 was one of the better scenarios for Jefferson’s value, as the Vikings were fourth in opportunity score for rookie wide receivers. 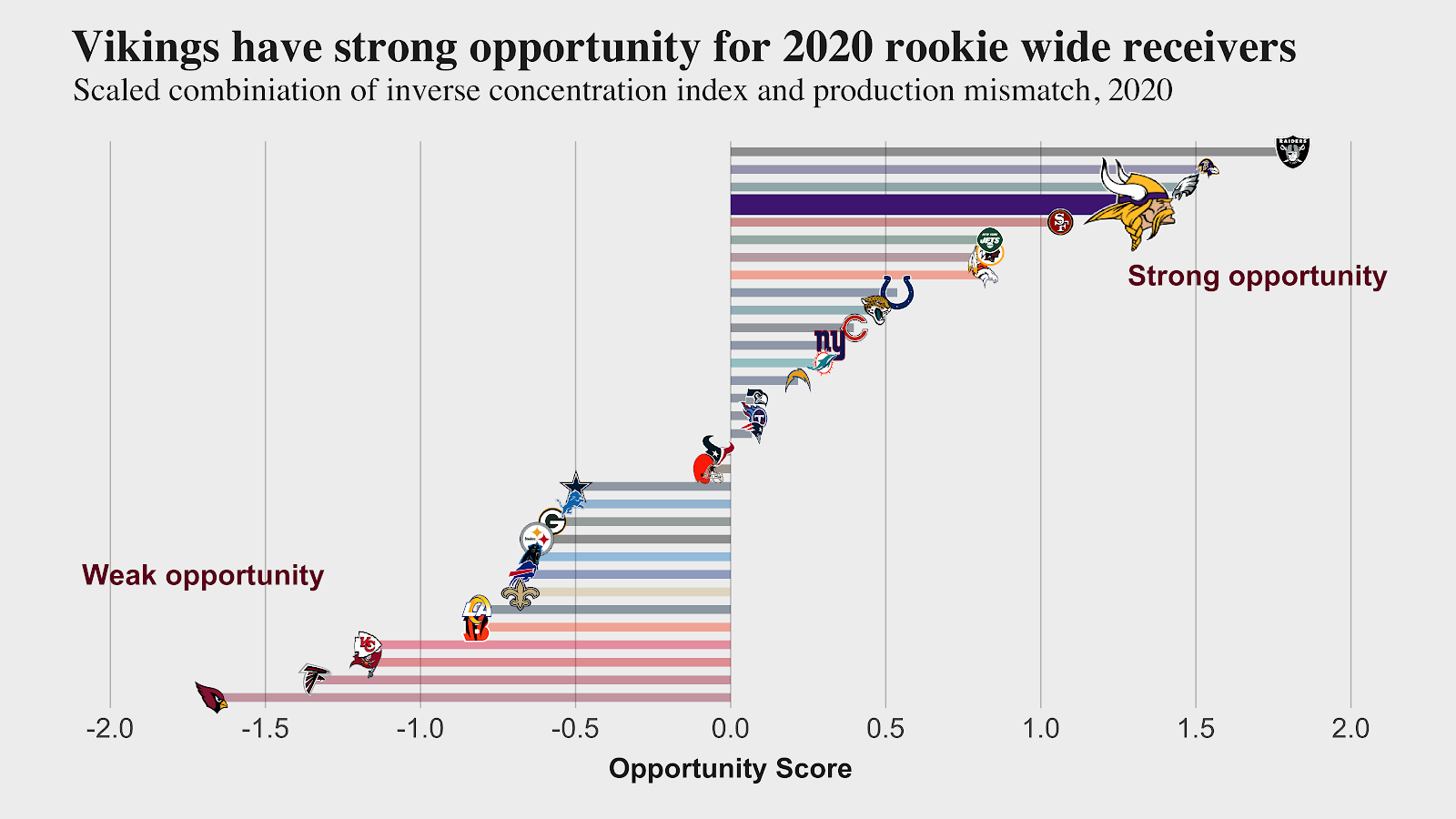 The Vikings wide receiver situation is similar to that of the Broncos, with one strong option on the pre-draft roster and then really nothing else. Despite having a higher opportunity score, the situation could be viewed more negatively, as Adam Thielen has established himself for multiple seasons and the Vikings desire a low-volume passing attack. That said, Thielen doesn’t profile as a traditional WR1 as much as the taller, faster and higher-drafted Jefferson. The question will be whether there’s too much overlap between the two in skill set with both primarily producing out of the slot last season. 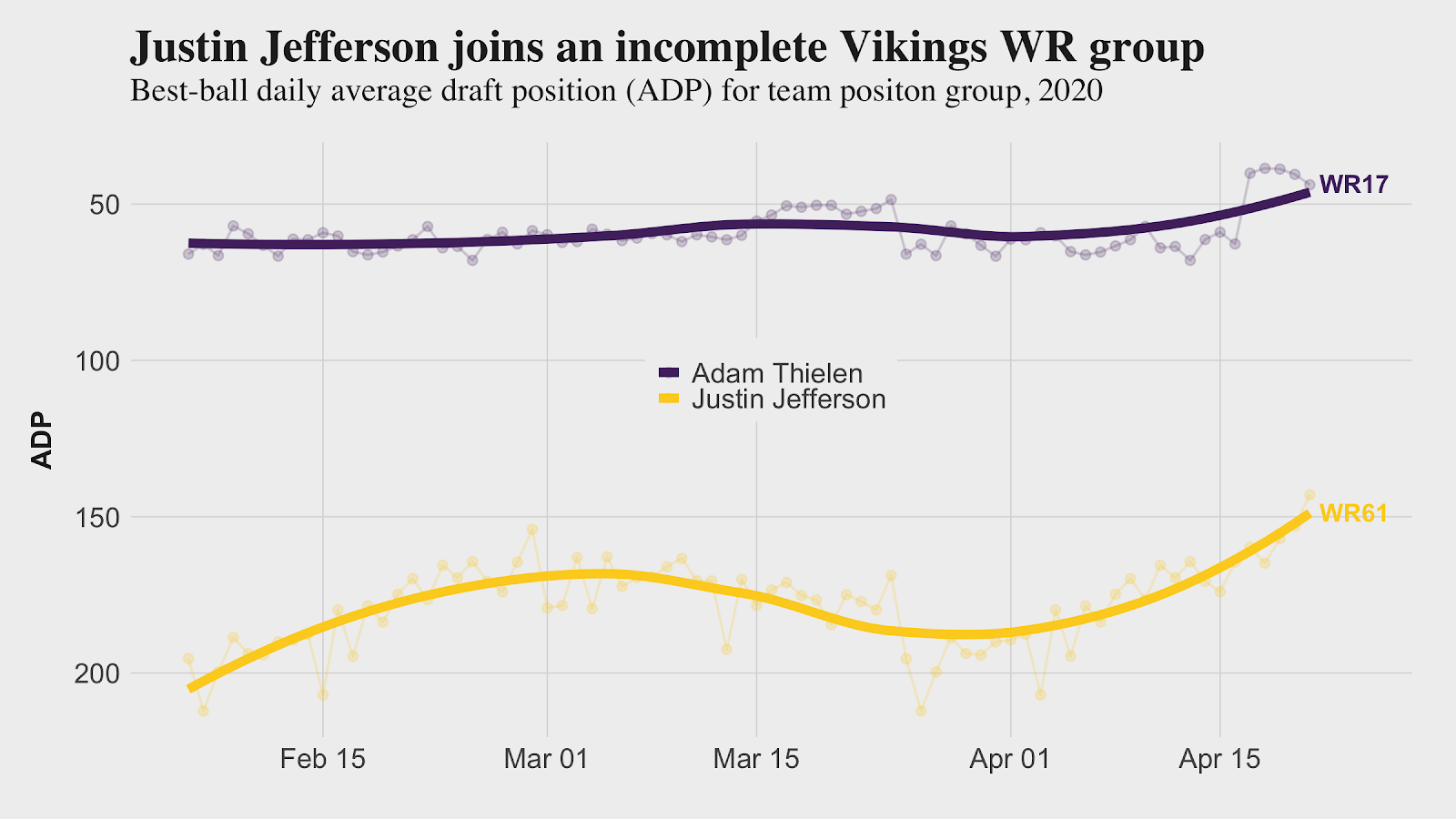 Aiyuk was the biggest surprise going as the fifth wide receiver in the draft, though his recent ADP showed hints with upward movement in recent weeks. Aiyuk only rose to WR78 in the last week and has plenty of upside after being drafted before presumed “better” prospects like Denzel Mims and Tee Higgins, who weren’t taken in the first round. 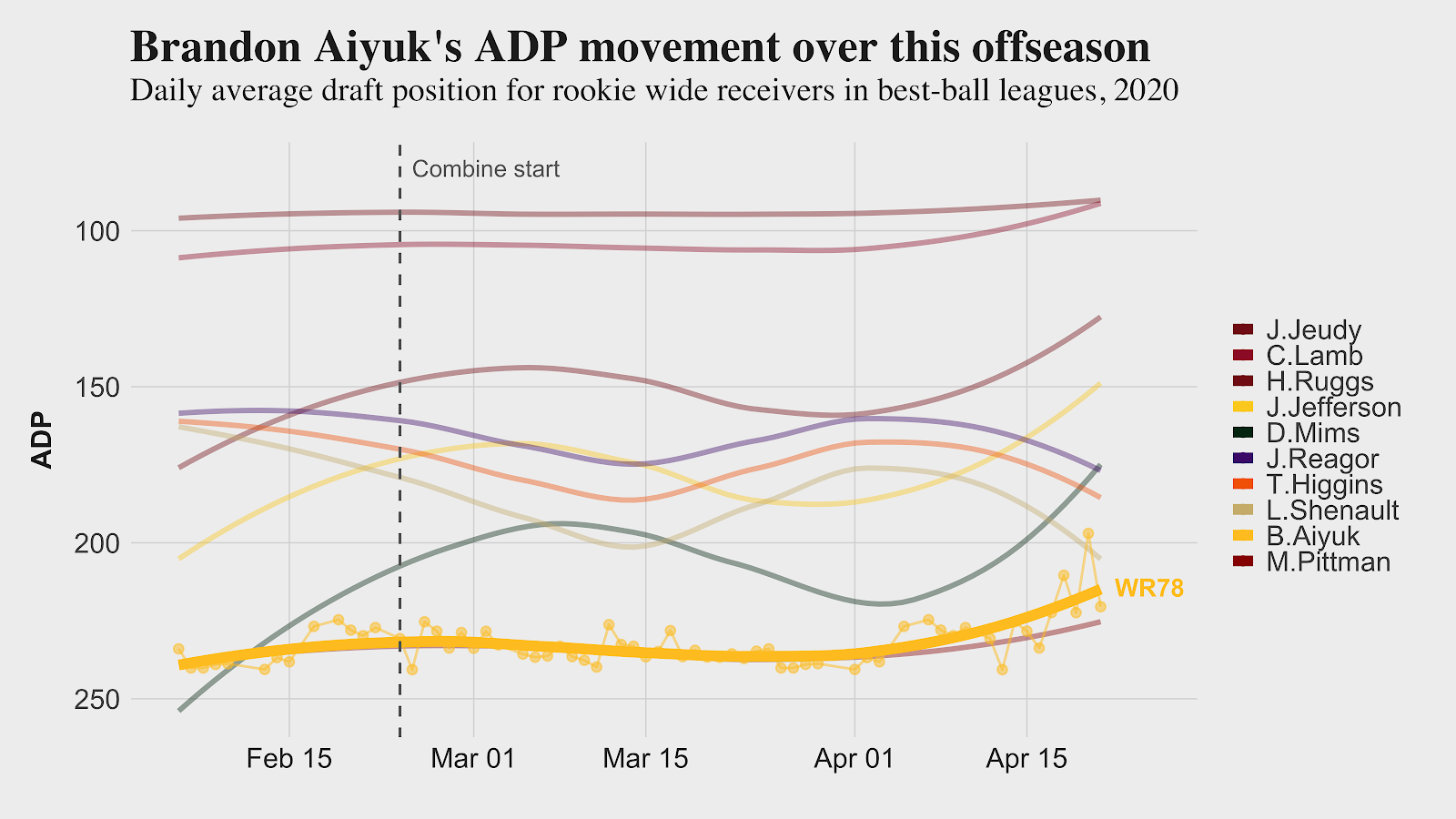 Aiyuk’s selection checks off all of the top-five teams in opportunity score as wide-receiver buyers in the first round, other than the run-heavy Baltimore Ravens. 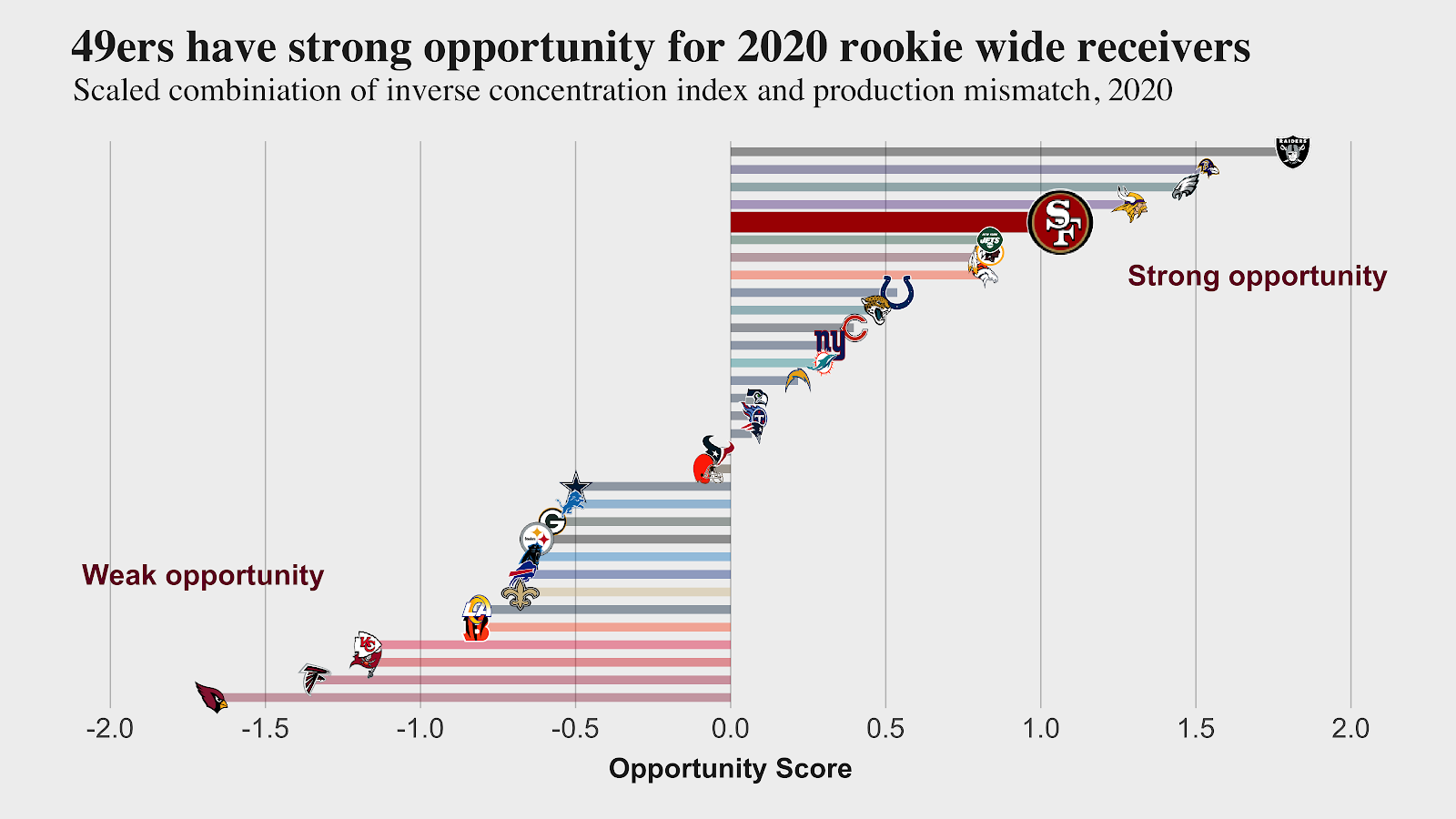 Aiyuk should slot immediately into a WR2 role for the 49ers, at least in terms of ADP. Jalen Hurd, a third-round selection last year, is relative unknown, and last offseason's fantasy favorite Dante Pettis has fallen off the radar. Aiyuk will likely be the biggest riser in fantasy drafts the coming months among rookie wide receivers. 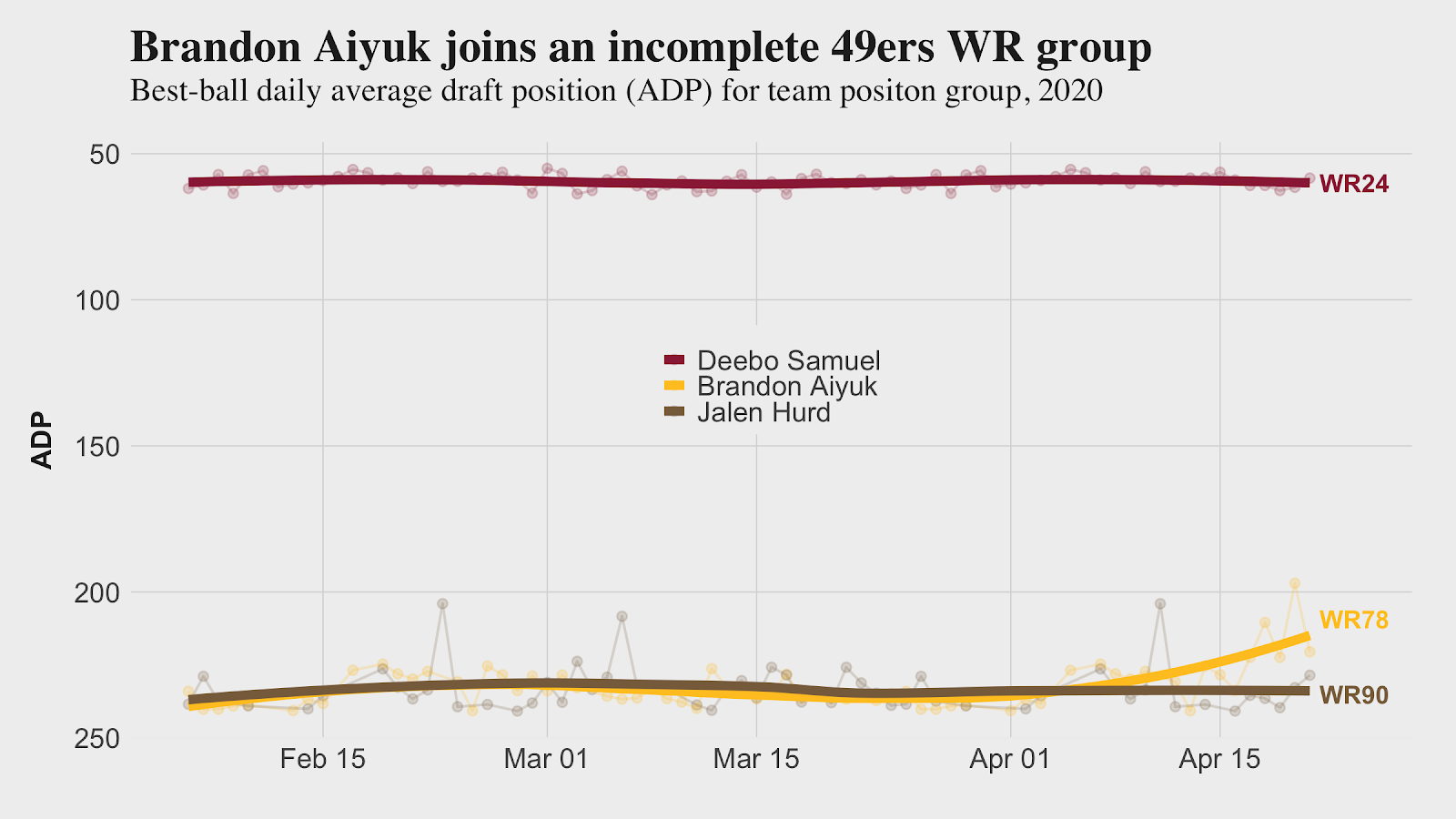 Edwards-Helaire was the presumed fourth running-back selection in this year’s draft, but in a not-so-shocking surprise he ended up the first. Edwards-Helaire has been a ADP riser in recent weeks, moving all the way to RB30. 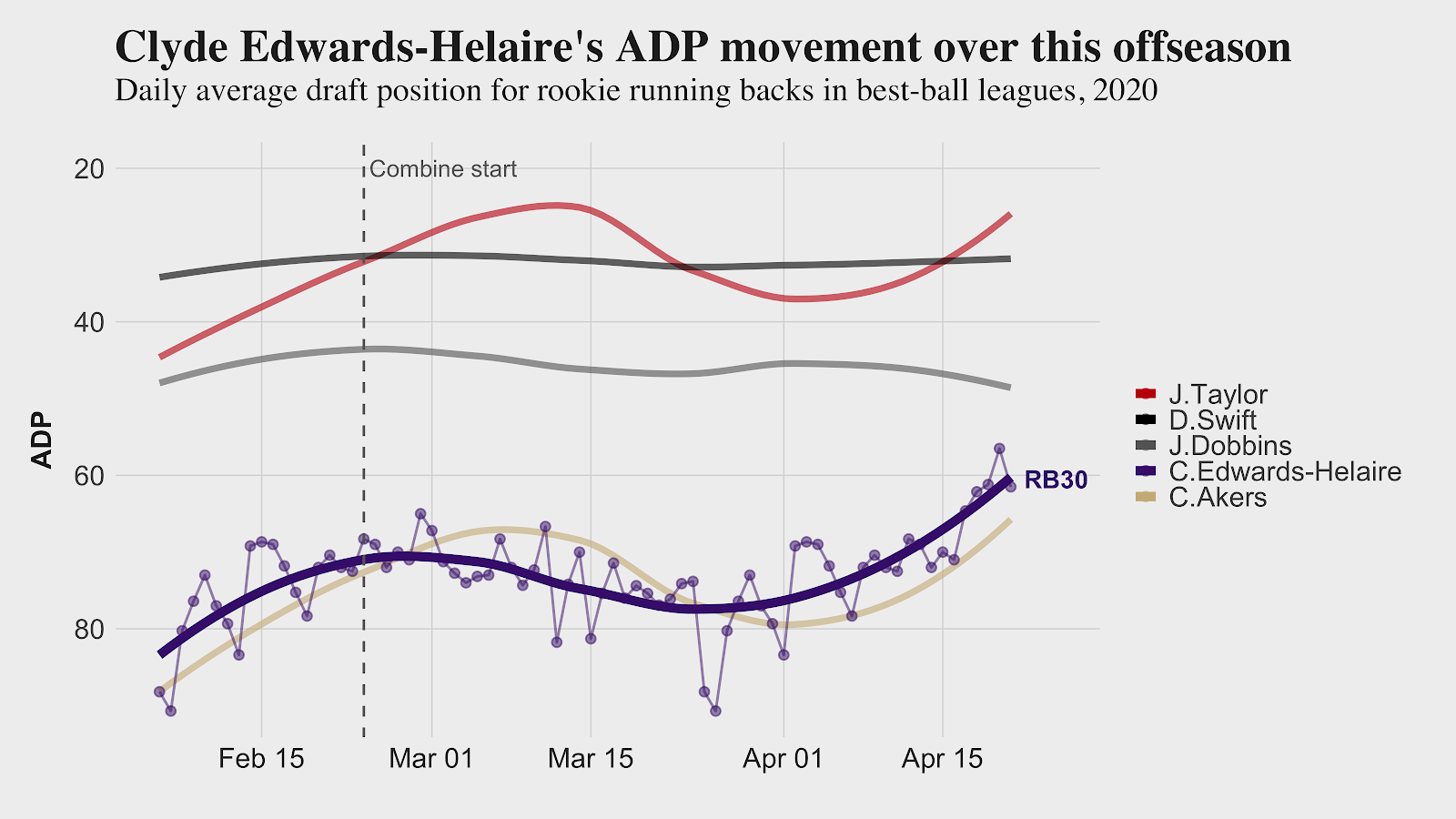 The Chiefs were only 10th in opportunity score for rookie running backs, though the model was likely fooled by the strong, but fragile, ADP of former leading back Damien Williams. 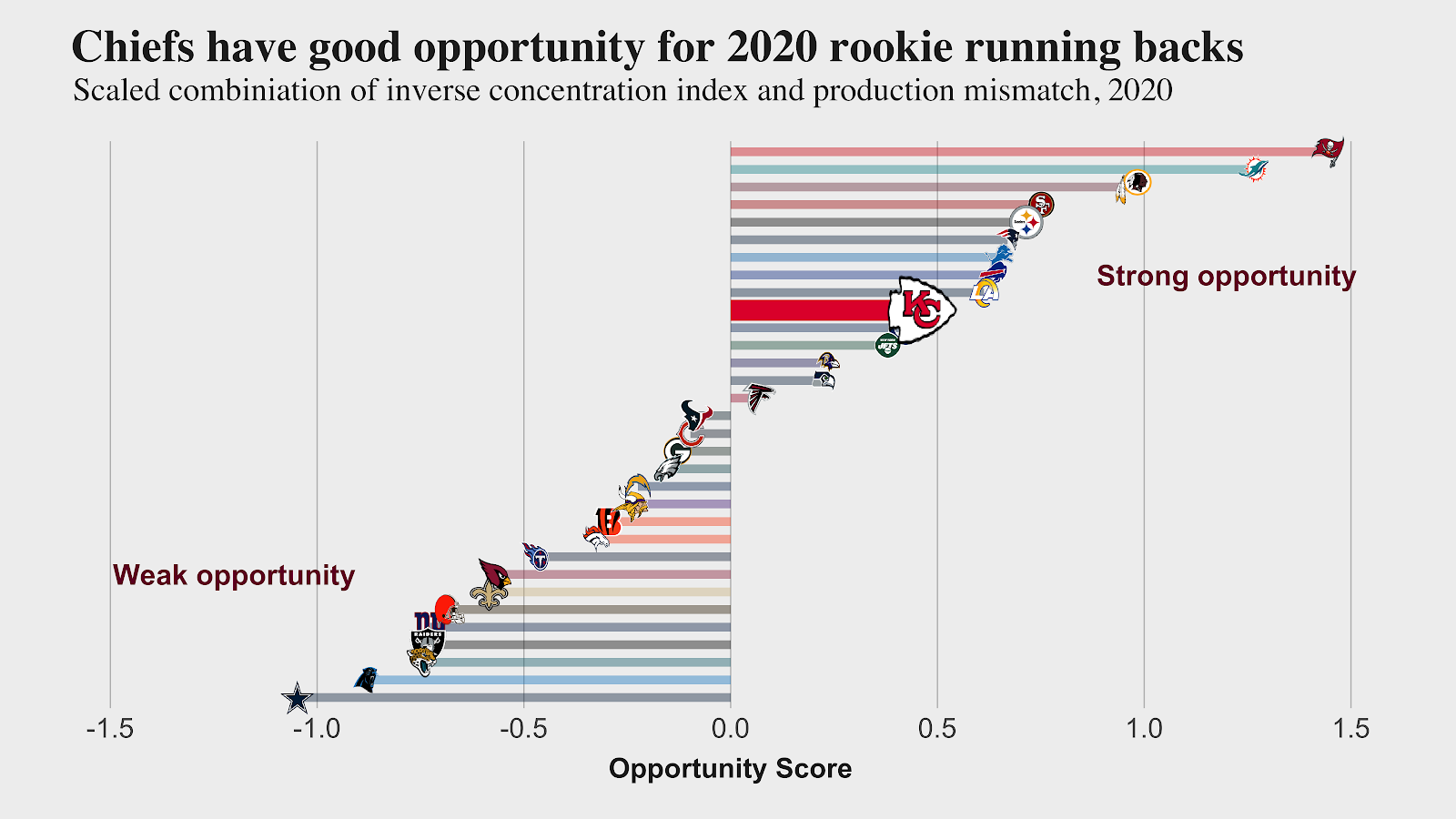 There were signs that Williams was a risky pick this offseason, only making it to top-25 status despite being the presumed lead back on the NFL’s best offense. Williams’ ADP should fall hard and fast in best ball drafts, while Edwards-Helaire is likely the biggest beneficiary of any rookie drafted this year. I wouldn’t be surprised if drafters talk themselves into Edwards-Helaire as a top-15 option if the buzz is strong and a three-down role becomes the consensus assumption. 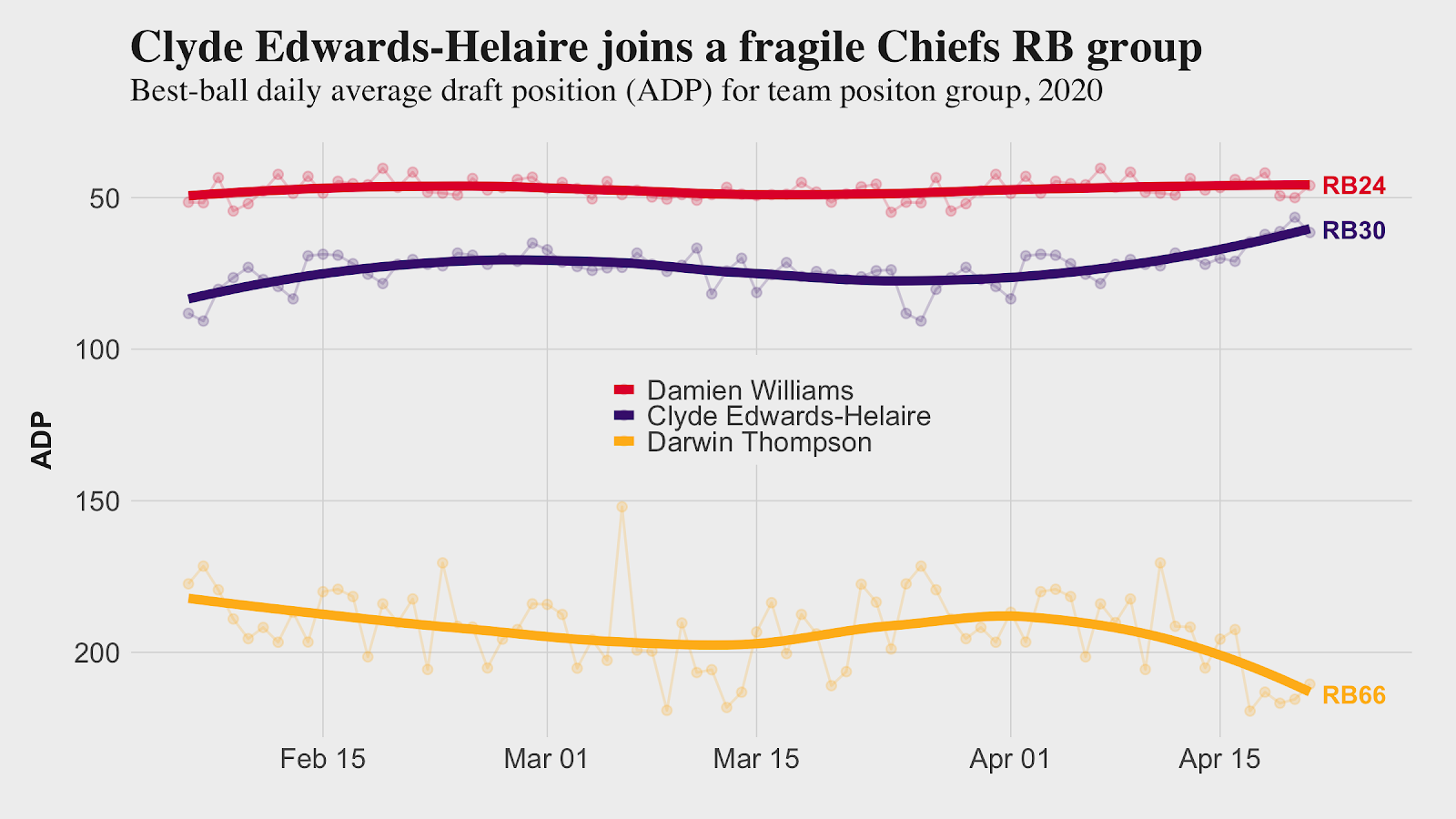