Galina: Why it might be a huge mistake for the New York Jets to draft BYU's Zach Wilson at No. 2 overall

What do we really know about quarterback Zach Wilson, the presumptive second overall pick of the 2021 NFL Draft? He wasn’t on anyone’s draft radar a year ago, but now the BYU product is everyone’s favorite quarterback and just a few days away from officially becoming the New York Jets‘ long-awaited savior.

Let's start at the beginning. His 2018 true freshman season was impressive enough for a first-year player — his 80.5 PFF grade that year even tied with Joe Burrow for 31st in the nation — but there was no improvement in 2019. And all things considered, a former three-star prospect with two average seasons under his belt was not going to feature in anyone’s mock draft heading into the 2020 college football season. But then the 2020 season happened, and the rest, of course, is history.

Wilson produced the highest passing grade in the country last season at 95.5, which certainly seems worthy of a top-five pick on the surface. But the problem is that it’s still hard to grasp exactly who Wilson is based on the tape.

Even though the rest of this year's presumed first-round quarterbacks played on teams that were the overwhelming favorite in most of their games, it still felt as though no team had an easier run than BYU. And this lack of competition can paint Zach Wilson in a very different light.

Stats, whether traditional or analytical, can obviously be skewed when players face favorable situations, and a lack of opportunities for negative plays can buoy a quarterback's production to enormous levels. For example, if a quarterback is throwing to wide-open receivers from clean pocket after clean pocket, the chances are that he will not score a lot of negatively graded plays. And while there may not be many highly graded plays when throwing to open receivers, the lack of negatives usually means that the quarterback in the comfortable situation grades better than the quarterbacks who are having to attempt more difficult plays and therefore score more negatives.

This is precisely why Zach Wilson rocketed up draft boards in 2020.

An excellent example of this phenomenon comes from the glut of “superspreader” offenses throughout the nation. Josh Heupel ran this kind of offense at UCF last season, and here is where his receivers tended to run routes: 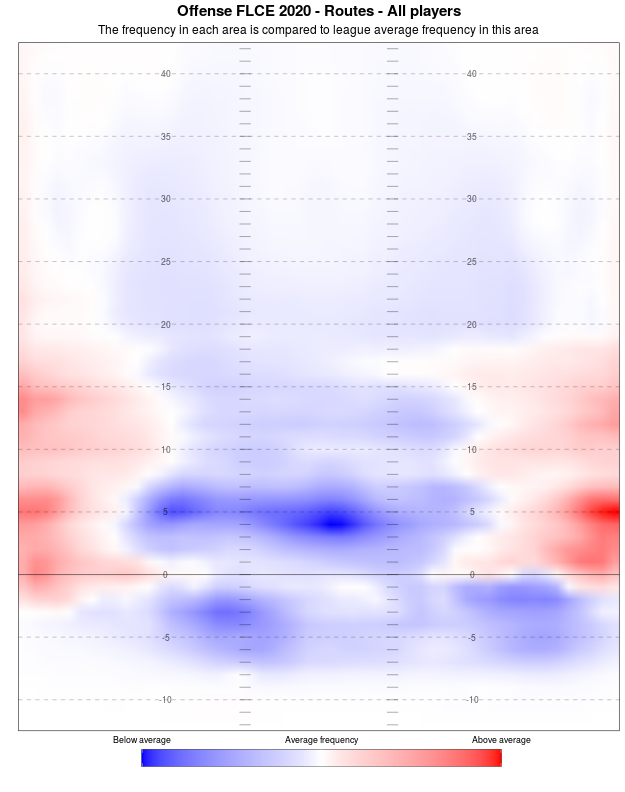 It's just vertical sideline shots. His starting quarterback, Dillon Gabriel, finished the season with only four interceptions on 413 throws. That’s good, right? Well, it’s hard to throw interceptions when you never throw over the middle of the field. After all, that’s where the sharks and predators lie in wait.

Now that the context is behind it, that four-interception total suddenly doesn't look as rosy.

This is what happened to Zach Wilson in 2020. The heatmaps below show where the BYU receivers ran routes on the left and where Wilson targeted those receivers on the right. 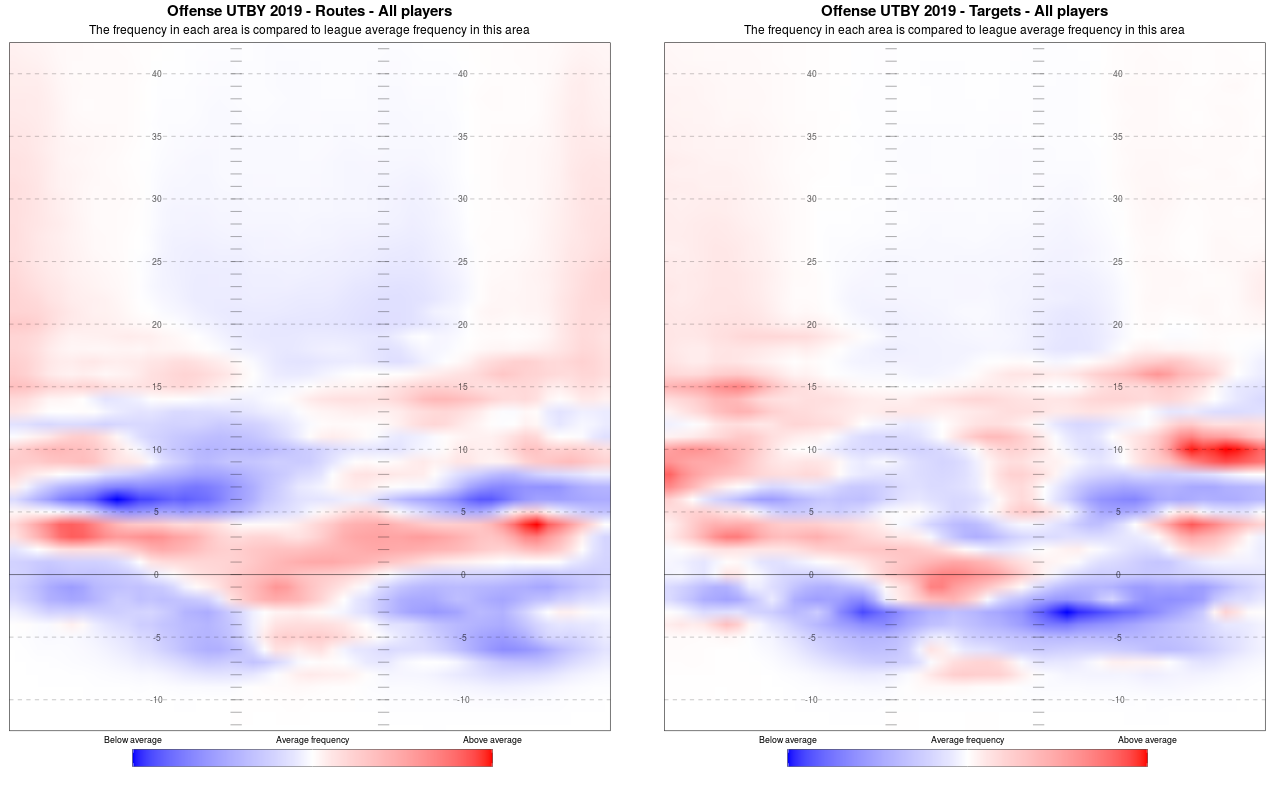 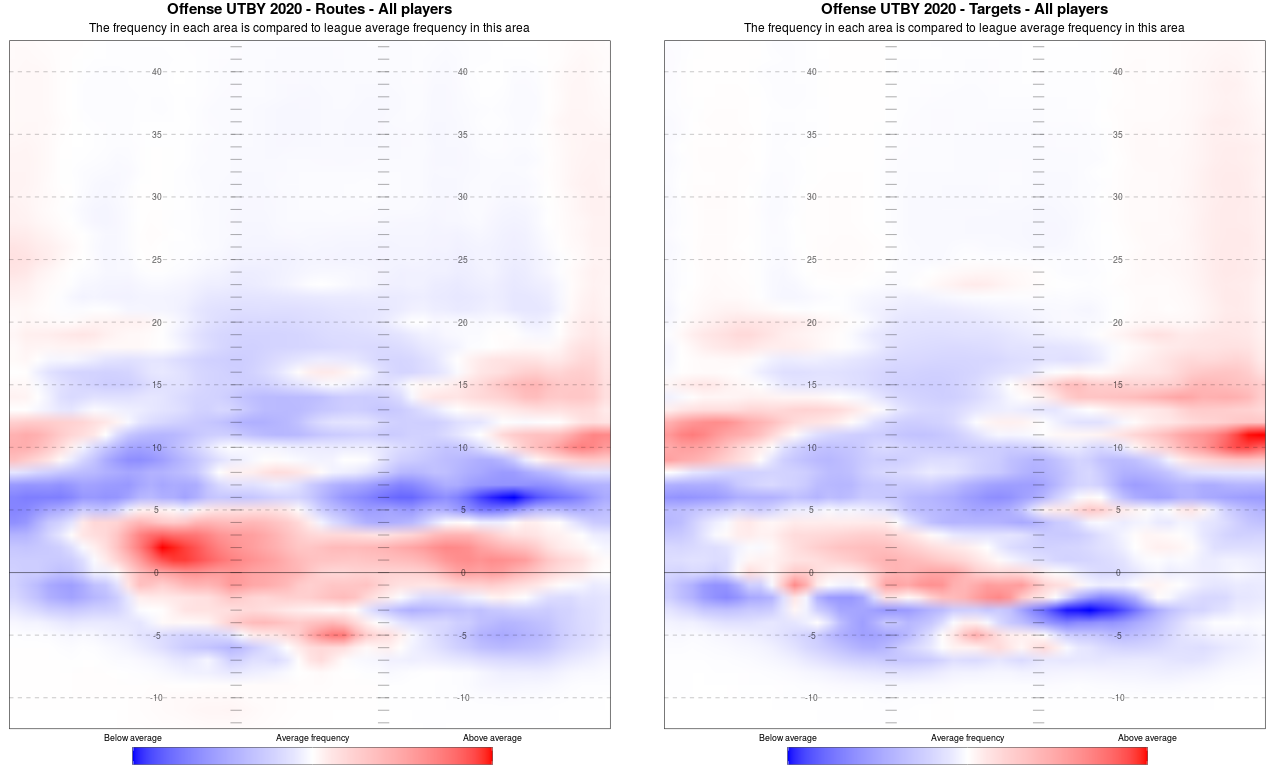 We can see that the receivers stopped running routes over the middle of the field and that Wilson cut back on his throws over this danger area. His turnover-worthy play rate fell from 3.5% after his first two seasons to 1% last season, while his negatively graded throw rate fell from 15% to 9%.

There is little doubt that he became a better technical quarterback — I won’t disagree with that. He stopped scrambling for no reason, realizing that he should use the incredibly good offensive line in front of him to protect him, and he did become a touch more accurate.

But the reason for Wilson's meteoric rise up draft boards has more to do with the offensive environment around him than it has to do with his development as a quarterback.