• Joey Porter Jr. is a viable replacement for Brown: The Penn State product proved his talent against some of college football's top receiving talents over the past two years, making him a potential boon to Dallas' secondary if picked.

• Jalin Hyatt can provide a vertical element to Cowboys offense: The Tennessee speedster can stretch defenses vertically, which should only create positive knock-on effects for Dallas' other weapons, such as CeeDee Lamb.

The Dallas Cowboys‘ 2022-23 season ended in disappointment yet again; however, instead of drowning in those sorrows, let's focus on how the team can improve during the 2023 NFL Draft, making sure the disappointment fans are feeling today won't repeat itself after the 2023-24 season. 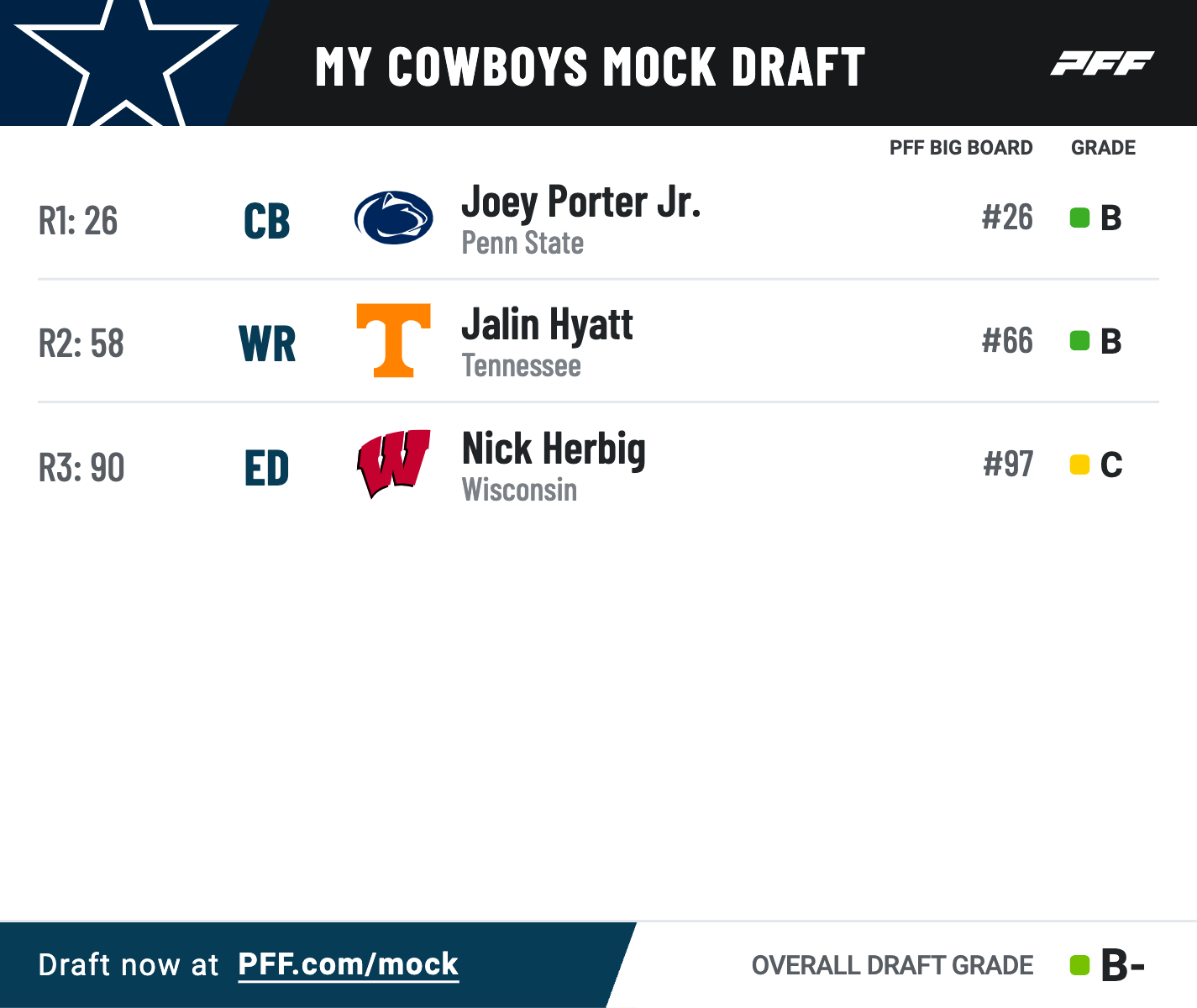 With Anthony Brown scheduled to enter free agency coming off a torn Achilles, in addition to rookie DaRon Bland proving to be an effective slot cornerback, the Cowboys would be wise to invest serious resources to find a more-than-capable outside cornerback during the 2023 offseason. And because Dallas tends to eschew making big splashes in free agency, it's likely the team will wait until the draft to find Brown's replacement.

Luckily for the Cowboys, this year's class is chock-full of impressive cornerback talent, meaning they shouldn't have a problem finding one over the first couple of days of the 2023 NFL Draft who can immediately contribute.

Porter, by most accounts, is one of the top talents this year, so the Cowboys would likely be ecstatic if able to grab the Penn State product at the end of the first round. At 6-foot-2 and 198 pounds, Porter possesses the ideal frame that Dallas looks for in an outside cornerback. Additionally, Porter thrives in press-man coverage and does an excellent job defending his vertical silo, which is a big reason why he's a great fit in Cowboys defensive coordinator Dan Quinn's scheme.

Porter's 12 pass breakups across the past two seasons were impressive, especially considering they came against a plethora of talented receivers,  including Ohio State‘s Chris Olave, Garrett Wilson and Marvin Harrison Jr. In fact, in his last two games against the Buckeyes, Porter allowed just 45 yards on 73 coverage snaps.

One thing that became obvious in the divisional-round playoff loss to the San Francisco 49ers is that Dallas lacks weapons to win outside the numbers and down the field, outside of Lamb. Michael Gallup struggled to regain his form after returning from a torn ACL that ended his 2022 season, and the rest of Dallas' receiving corps just simply lacks talent (wouldn't it be nice if Amari Cooper was still around? I digress…).

Jalin Hyatt will be a top receiver in the NFL one day pic.twitter.com/TiYeVGmbur

Hyatt has the speed and game-changing athleticism to change that for the Cowboys' offense. While Tennessee's offense didn't challenge Hyatt to become a refined route runner, his speed, ability to run the vertical route tree and propensity to manipulate defensive back leverage would enable him to be the field-stretcher that Dallas' offense so desperately needs. Hyatt's 663 “deep” (passes 20-plus yards downfield) yards ranked third in college football last season, while his 3.27 yards per route run ranks third among receivers in the 2023 NFL Draft who received 50-plus targets in 2022. Additionally, his 156.3 passer rating generated when targeted last season was the highest among all players.

Hyatt's ability to stretch the field vertically should only open up the intermediate zones the Lamb and Dallas' tight ends love to exploit, which should, in turn, help boost the Cowboys' passing-game efficiency in future years.

This pick, amid Dallas' excellent edge defender crew that includes Micah Parsons, DeMarcus Lawrence and Sam Williams, might puzzle fans. While fortifying a strength is never a bad decision, the real reason the Cowboys grab an edge defender in the third round is pure value.

Even though he's undersized at a listed 6-foot-2 and 228 pounds, Herbig is, by my eyes, the most skilled pass rusher in the 2023 NFL Draft, as he displays an advanced pass-rush repertoire and notable technical refinement for his age to go along with promising athletic traits that enabled him to terrorize opposing tackles throughout his time at Wisconsin.

Y'all going to force this dude to play off-ball and wonder why he's not as impactful as he should be.

put Nick Herbig on the edge and let him rush, figure out the rest later pic.twitter.com/DKbi5l1oKk

Plying his trade in a Big Ten conference littered with excellent offensive tackle talent, Herbig was a dominant force, posting elite marks in PFF's stable metrics for edge defenders, including pass-rush grade (91.1), pass-rush win rate (23.9%) and pass-rush grade against true pass sets (92.4). Additionally, despite being undersized on the edge, Herbig was able to generate a 78.4 run-defense grade in 2022, ranking inside the 78th percentile among edge defenders in 2022 (min. 20% snap rate).

Herbig could be a Parsons-lite for the Cowboys' defense due to his ability to generate pressure off the edge and be inserted as an effective blitzer from off-ball alignments. While Herbig's lack of size and length will likely deter most teams from investing an early pick on the talented pass rusher, Dallas would be wise to take advantage. And the fact that undersized pass rushers such as Parsons, Haason Reddick and Josh Uche put together incredible years should give the Cowboys more confidence in going against the grain with this selection.