PFF data scientist Eric Eager has done tremendous work building college-to-pro projections, which are built off the robust college data we’ve collected since 2014 and have been applied to exercises like building an “analytics” mock draft. In this analysis, I will use some of our advanced stats for comparison but primarily rely on traditional stats to go back further and compare the 2022 prospects to draft classes going back to 2006.

The comps below were derived from a two-step process. First, I converted the most statistically relevant stats and measurables to percentiles based on the thousands of prospects who have entered the NFL since 2006 at each position.

The matching features were transformed by principal component analysis (PCA). I found the closest statistically comparable players by the euclidean distance between the players' principle components, listed in the top 10 below.

I also included the most important workout metrics for NFL and draft position for wide receivers: weight, 40-yard dash time and vertical jump. I’m taking the best number from either the prospects' NFL Scouting Combine or pro day performances. If the 40-yard dash time or vertical jump are missing, I estimate them based on historical modeling with weight and available other workout metrics.

Jalen Tolbert isn’t a top-tier prospect, but he’s currently being mocked into the top 100 picks of the NFL draft. Tolbert didn’t blow up the combine, but he did score sixth highest in my model projecting actual NFL value, hitting good-not-great speed measures while putting up relatively strong vertical jump (36 inches) and three-cone drill (7.08 seconds) numbers. Tolbert ran only the short shuttle at his pro day, posting an average time of 4.24 seconds. 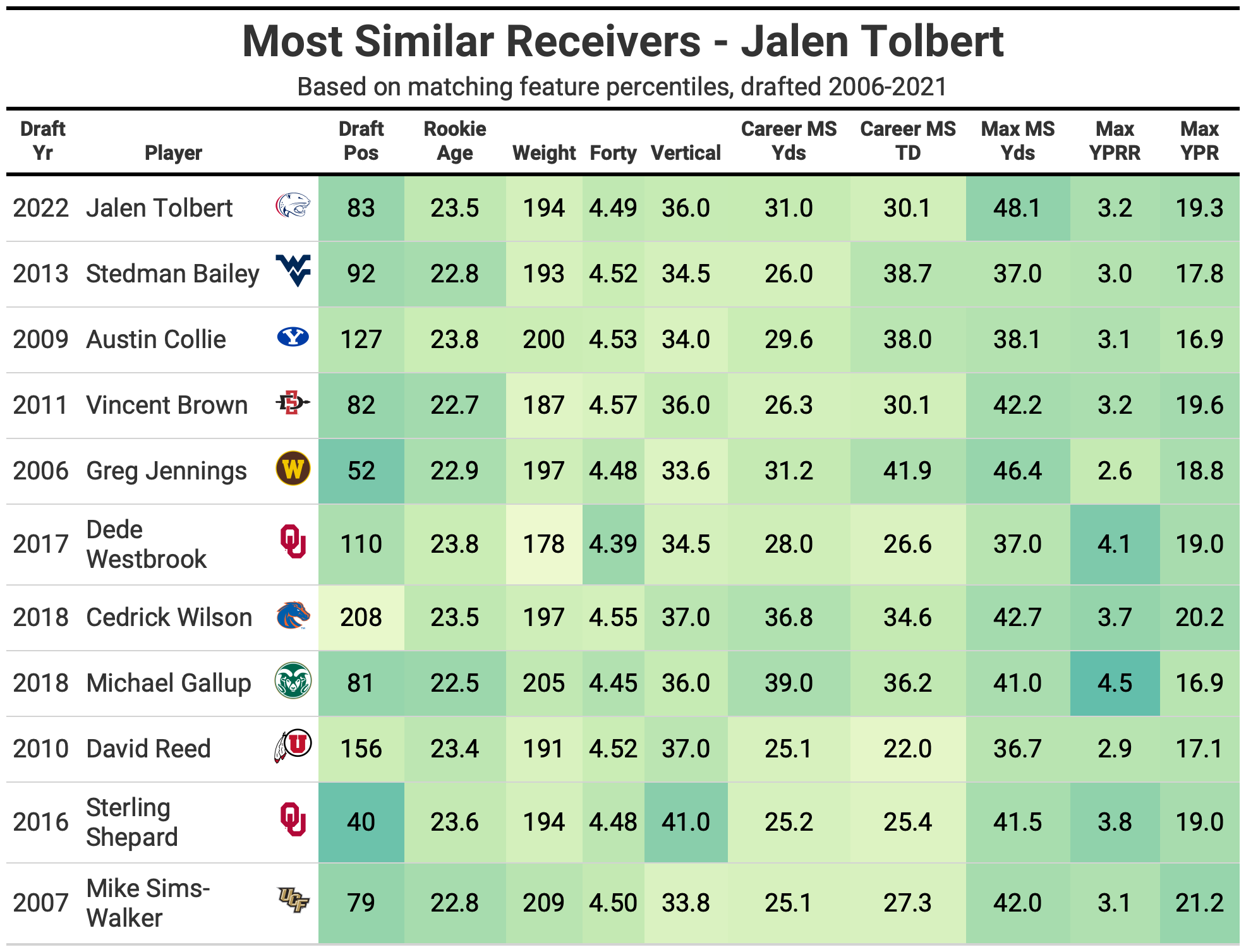 Tolbert’s top comparable players include a few good NFL contributors but only one real “hit” in fantasy football production in Greg Jennings. If Tolbert is paired with Hall-of-Fame level quarterbacks like Jennings and fills an immediate, high-volume role like him, I can see the path to early-career stardom. Otherwise, it’s a low-probability proposition.

The biggest differentiator that Tolbert has going for him is multiple years of strong production, crossing the 30% threshold for career market share of team receiving yards and touchdowns. The limiting context is playing for a smaller program at South Alabama, plus the fact that he needed to wait until his redshirt junior and senior seasons to cross 1,000 yards receiving.

One metric that radically alters Tolbert’s comp mix is including rookie age. Playing through his super-senior season at South Alabama and entering the NFL at 23.5 years old, Tolbert loses proximity to pure stats/metrics-based comps who entered the NFL at a younger age, like Stefon Diggs. 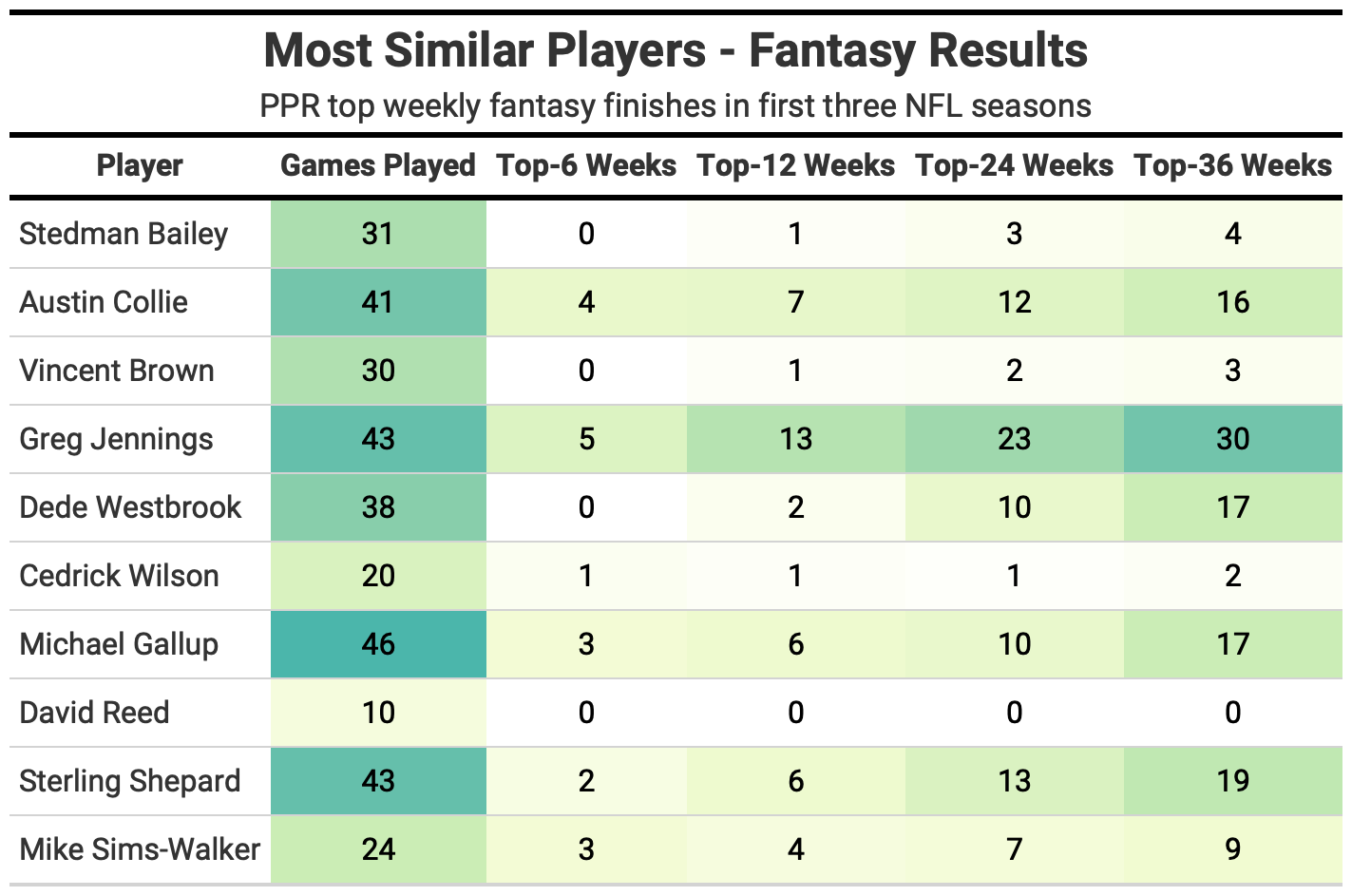 Looking only at Tolbert’s closest comparable players who played in the PFF College era (2014-2021), we can see how his percentiles stack up for receiving grade and other advanced stats like alignment, yards after the catch and deep targets (targets from passes thrown 20 or more yards downfield). These stats are all from the prospects’ final seasons.