Last week, I released the results of historical modeling on the NFL Scouting Combine since 2006 and quantified the effect of NFL value (according to PFF WAR) and draft position for all measurements and drills.

In this analysis, I’m going to apply the value models, with a few tweaks, to the results of the 2022 class' combine, starting with the offensive positions.

Below, I’ll show an updated illustration for the attribute effect — i.e., the impact of outperformance on early-career wins WAR (first three seasons) and NFL draft position. Some of the numbers will differ from what I calculated last week, as there were a few position groups that skipped a number of drills, which necessitated taking them out of the modeling process. 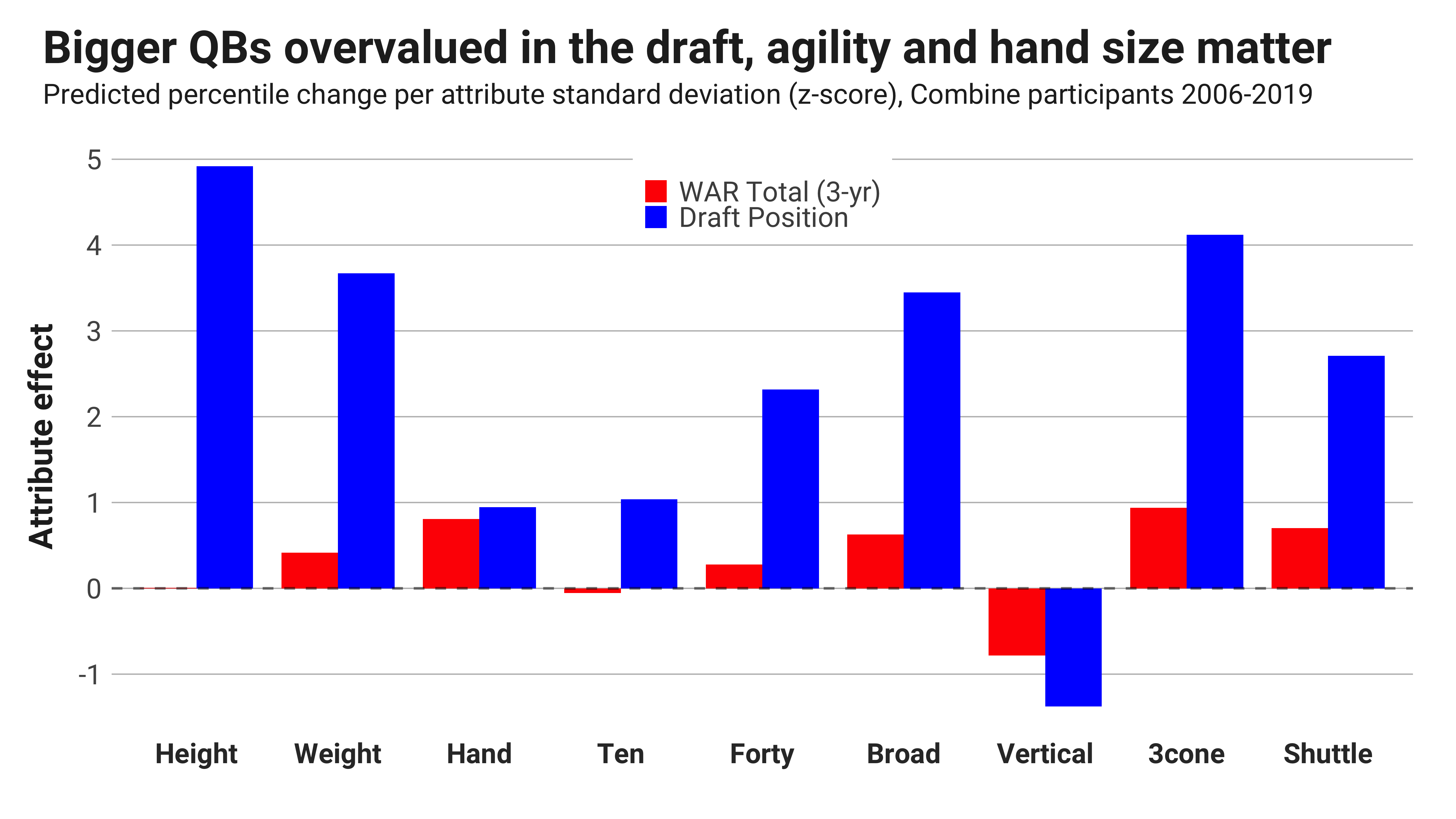 The only measurement added to the modeling for quarterbacks is the 10-yard split within the 40-yard dash. We didn’t get a lot of drill results for quarterbacks, but for those we did, they were fairly complete.

Desmond Ridder was the top projected quarterback coming out of the combine in terms of early career PFF WAR, followed by EJ Perry and Jack Coan. Ridder’s 69th percentile WAR prediction is good but not great, as it is hurt by a poor weight-adjusted three-cone drill. Only six quarterbacks completed enough drills for measurement, so pro-day performances will help complete a number of these prospects' athletic profiles. 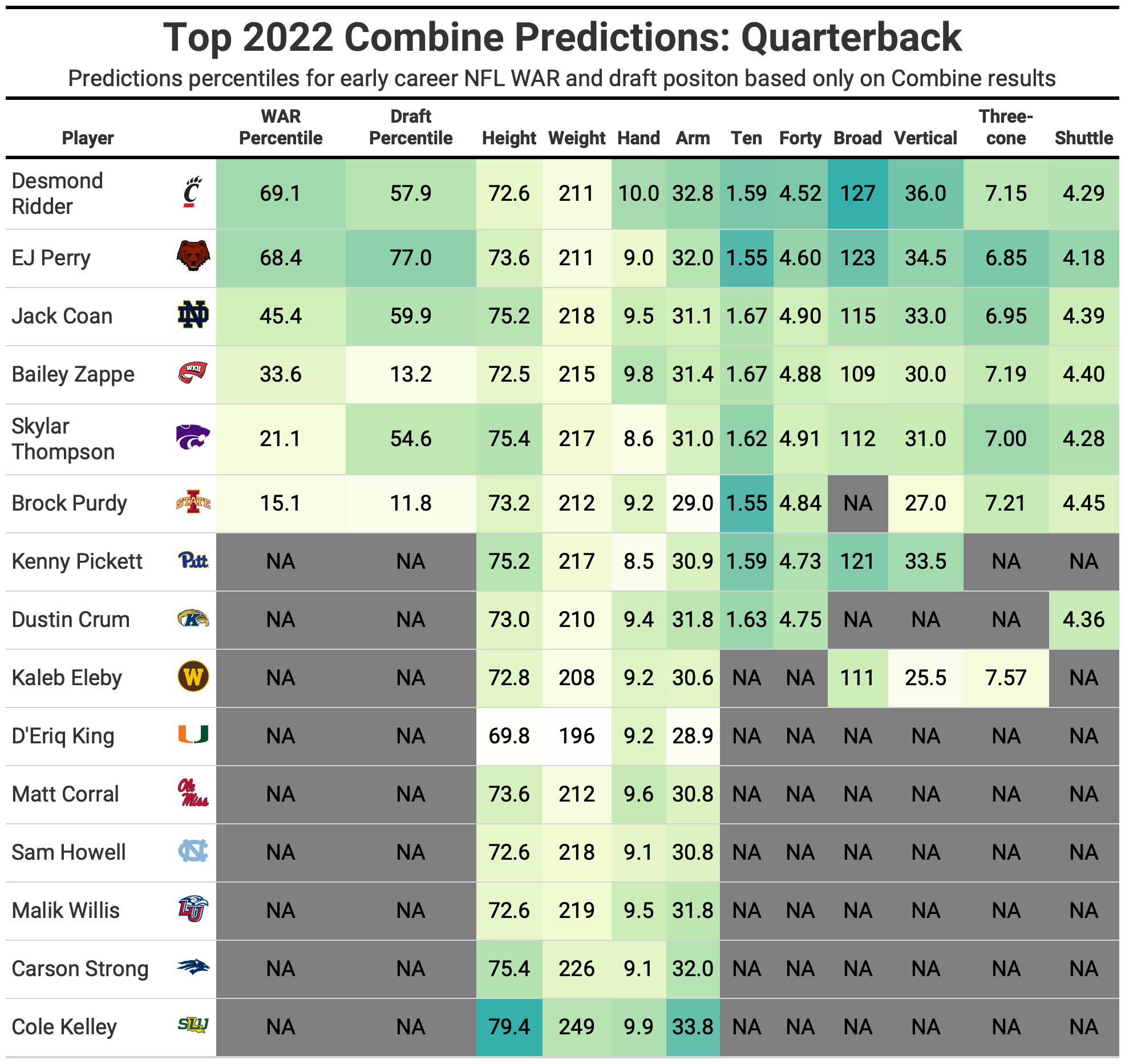 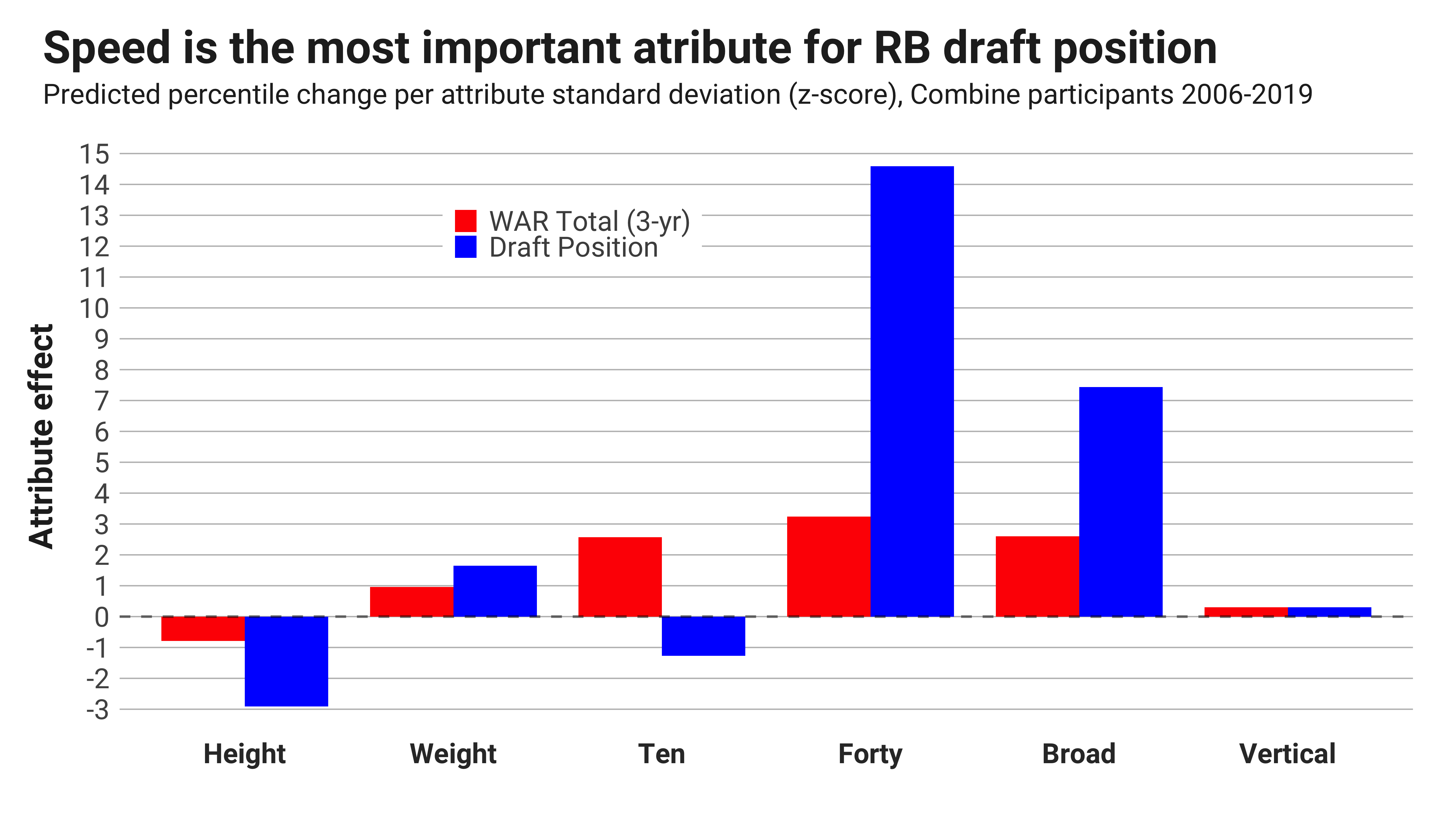 It might look a little obnoxious to see all the horizontal lines denoting each level of attribute effect, but I didn’t spread them out to emphasize how important the combine drills are for running backs. When eliminating the agility drill from the model (zero running backs participated in them), the 40-yard dash is overwhelmingly important for a running back's draft position, and many backs in the 2022 class outperformed in that drill.

Zamir White came out of the combine with the top early WAR score after posting great weight-adjusted times in the 40-yard dash and the 10-yard split, plus a healthy 10-foot-8 broad jump at 214 pounds. Breece Hall improved his draft position more than any other running back, running a blazing 4.39 in the 40-yard dash while hitting 40 inches on the vertical jump. Hall’s WAR percentile score isn’t quite as high because the vertical hasn’t been correlated with NFL success recently, and Hall’s 1.54-second 10-yard split wasn’t nearly as impressive as his 40 time. Hall was the RB1 in my pre-combine rookie fantasy projections, and these results will only solidify his status as the top running back in the class.

Kenneth Walker III is another top running back in what is perceived to be a weaker class, and like Hall, his combine results were top notch. Both Walker and Hall are now in the early second-round conversation and could even make their way into the first round.

Kyren Williams and Dameon Pierce were second-tier running backs according to early mock drafts, but I expect their stock to drop post-combine. Williams fell below the 10th percentile in draft position percentile, and Pierce was well below average. 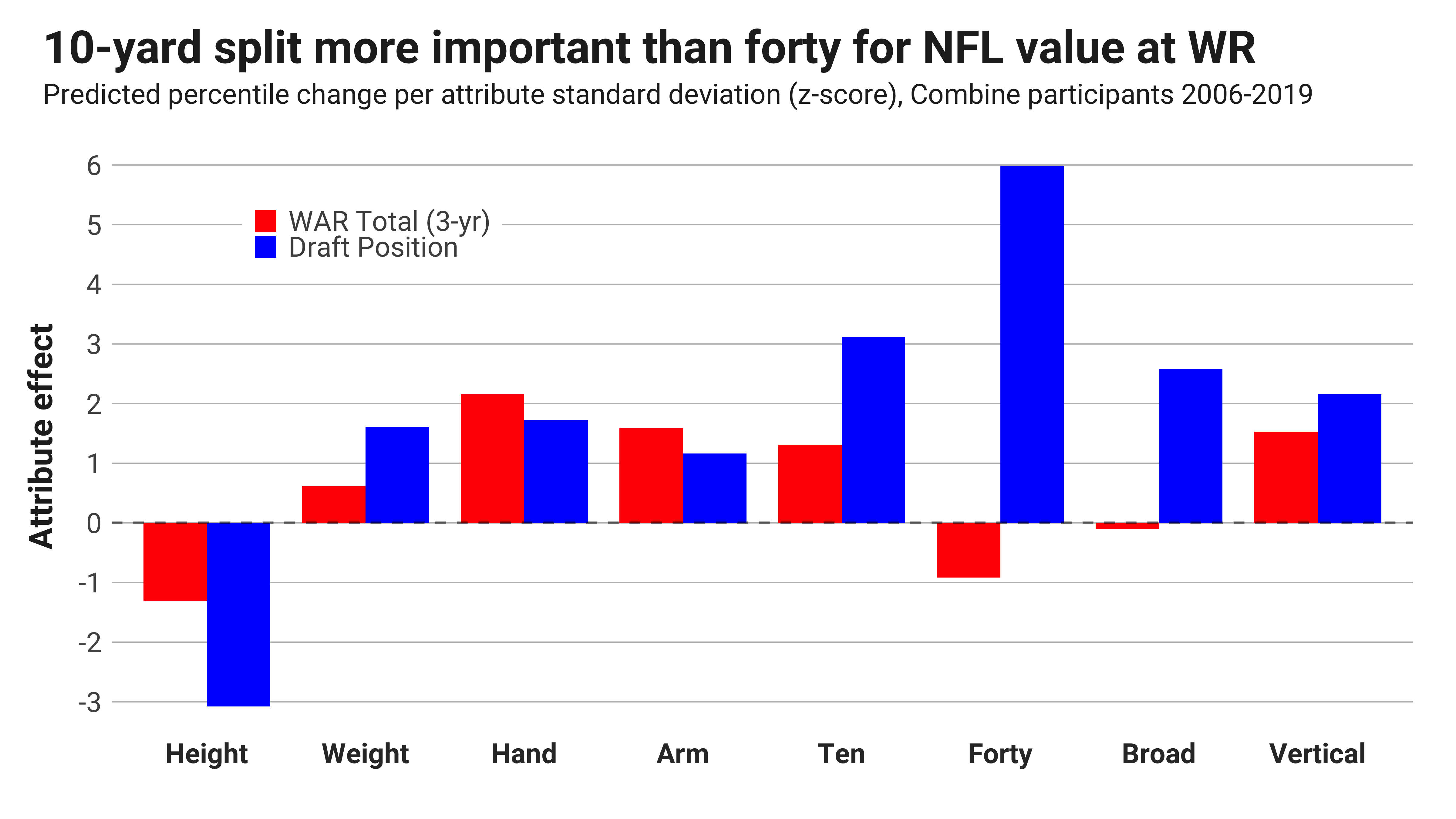 The lack of participation for wide receivers in the agility drills forced me to remove those times from the model, so we’re left with the 40-yard dash as the most important drill for draft position even though it has a slightly negative correlation with actual NFL value. Hand size, vertical jump, arm length and the 10-yard split are most important for projecting PFF WAR, though none tremendously so.

PFF favorite Skyy Moore comes out the combine with the best WAR percentile and the third-best draft position percentile. Moore wasn’t commonly mocked as a Day 2 pick coming into the combine, but that will likely change going forward. Christian Watson finished second in WAR percentile and first in draft position, making him a name to watch as an early Day 2 sleeper, as he hit all the speed, size and jumping marks associated with NFL success.

The general impression will be that potential WR1 Treylon Burks didn’t do himself any favors at the combine after running a middling 4.55-second 40-yard dash with a 33-inch vertical jump. However, he scored well according to our WAR projection due to a fast 10-yard split, which was equivalent to what is expected from someone running a mid-4.4 40-yard dash, and measuring in with large hands and arm length.

Wan’Dale Robinson and George Pickens were the combine flops according to WAR projections, as the former measured in small and slow while the latter has smaller than expected hand size and ran a slower 10-yard split than expected for someone with a 4.47-second 40-yard dash. 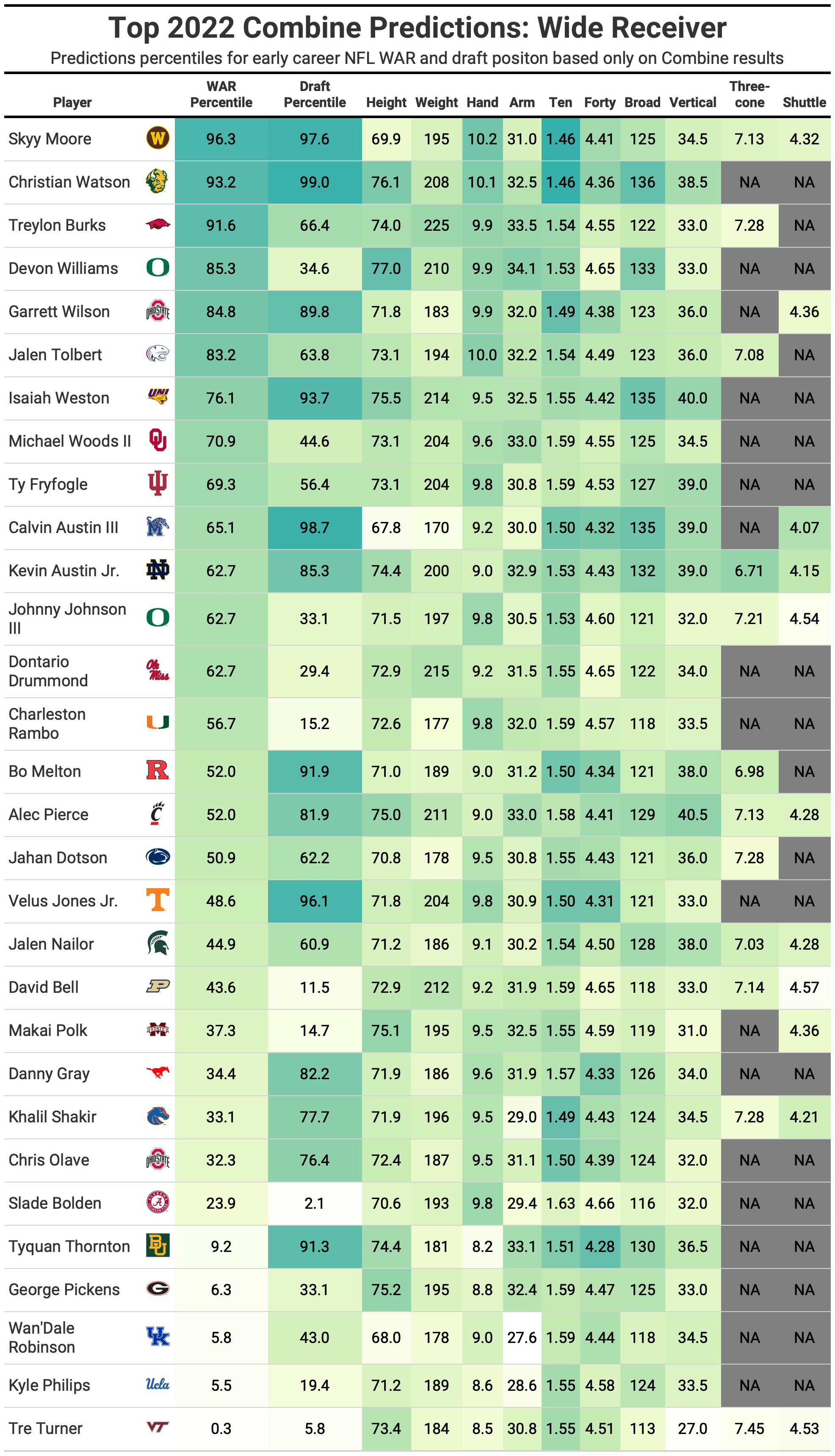 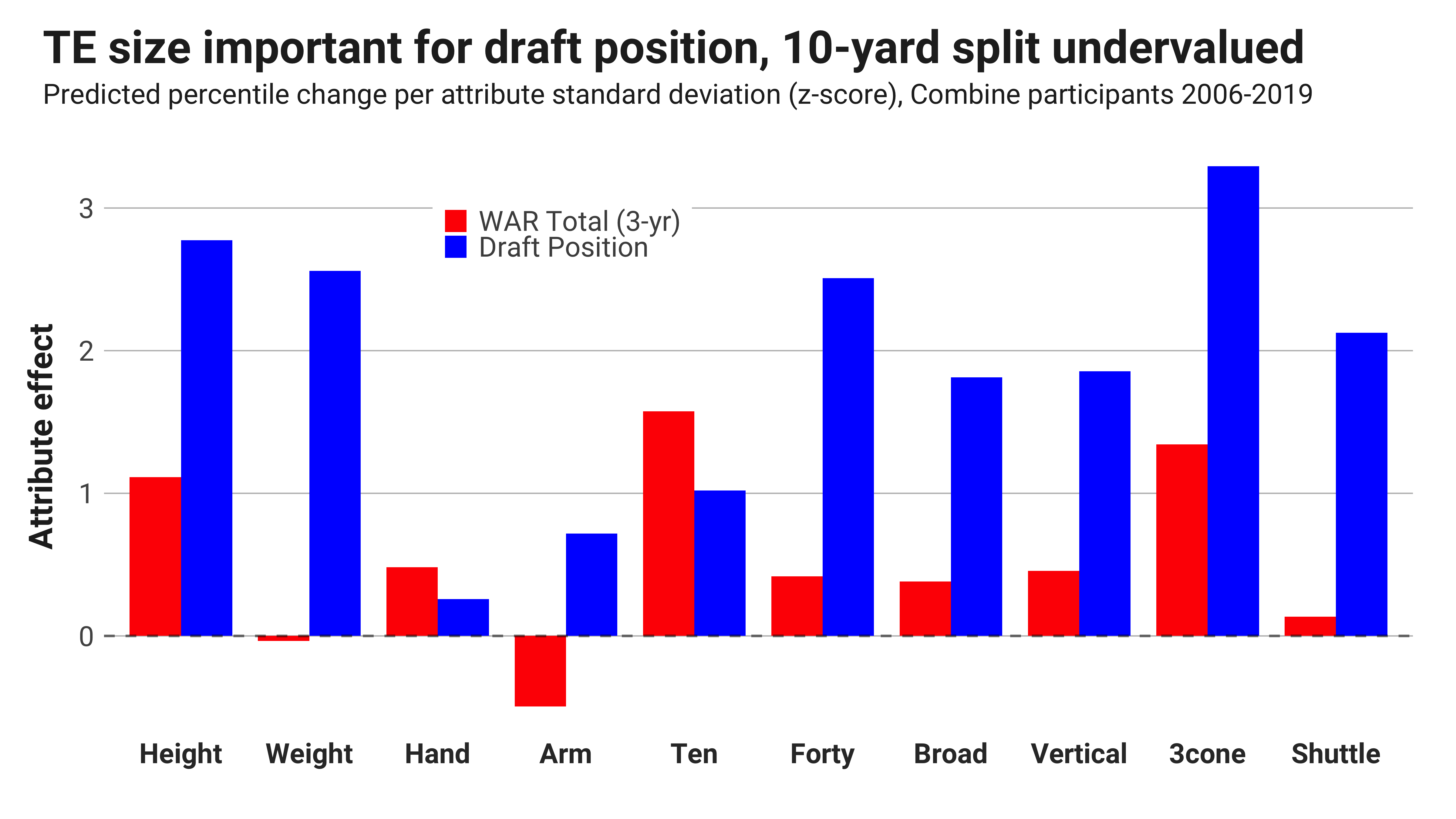 Luckily, enough tight ends participated in the agility drills to make them part of the model, as the three-cone finished second to only the 10-yard split for predicting PFF WAR and being most correlated with NFL draft position.

Austin Allen may not have had a “wow” 40-yard dash time, but his weight-adjusted three-cone was strong. In addition, his 10-yard split was impressive, and his taller frame is associated with NFL success.

Greg Dulcich and Jake Ferguson are the only tight ends currently showing up in middle rounds of mock drafts who completed enough drills to qualify, and neither did much to improve their likely draft position. 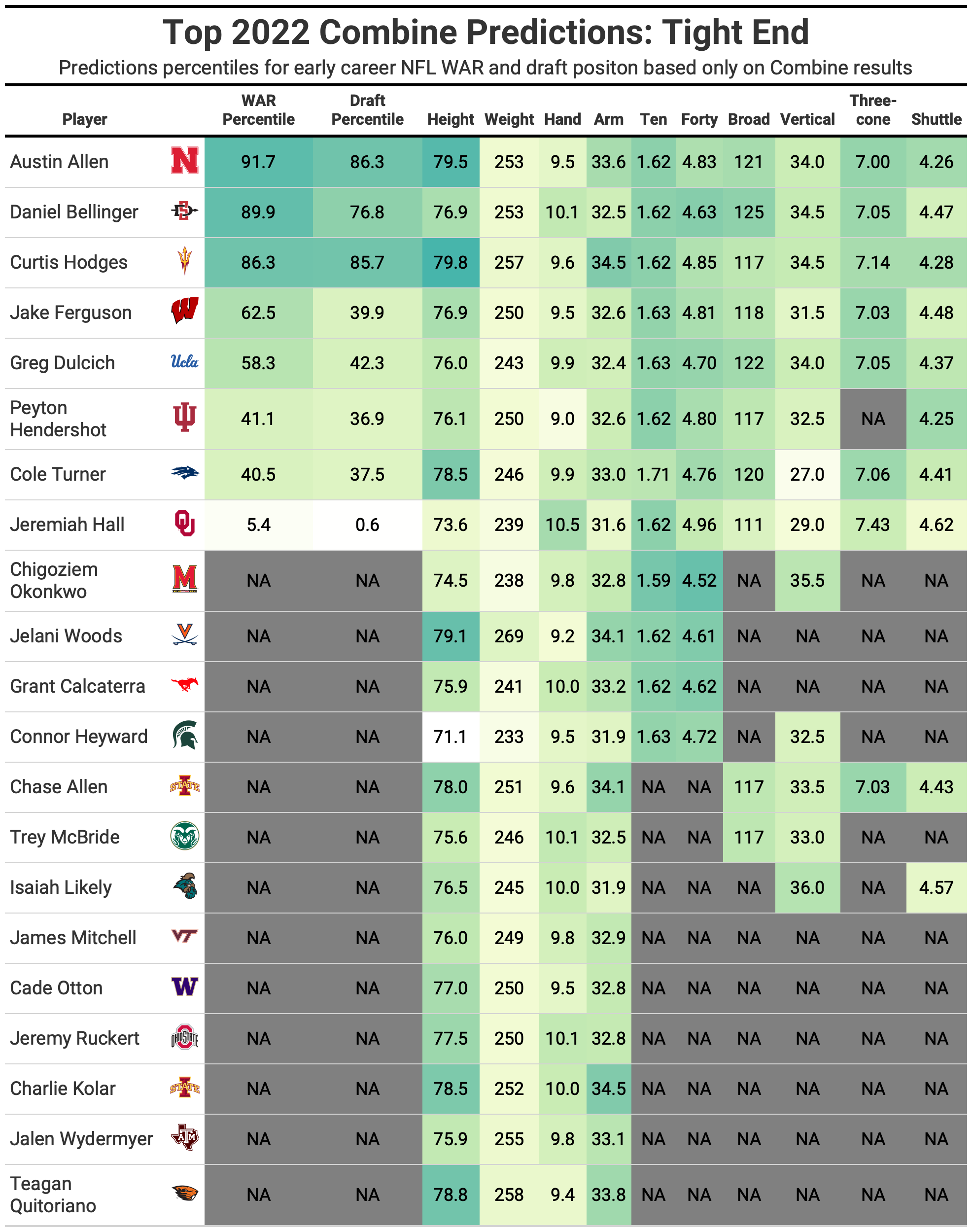 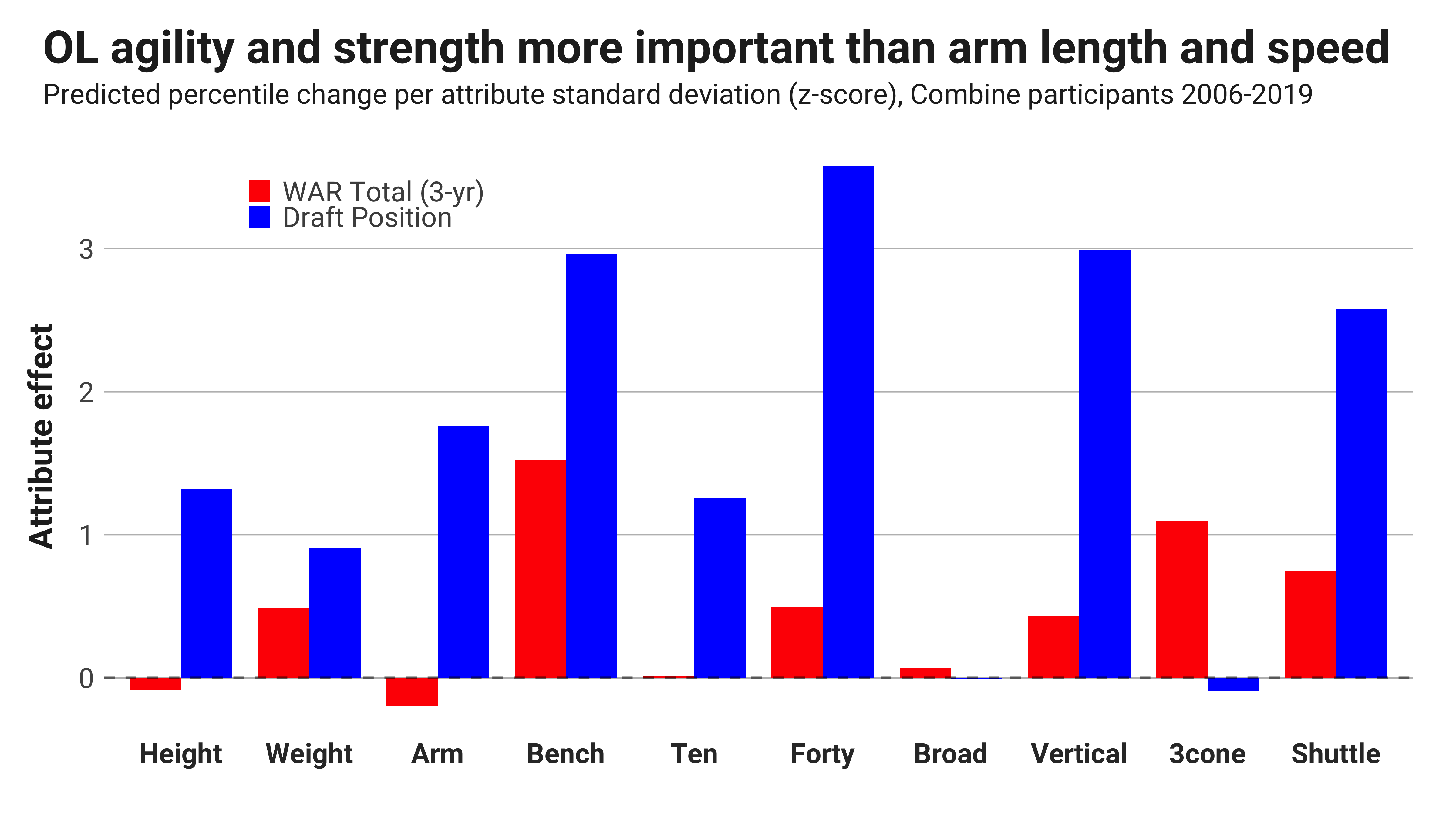 I decided to group all the offensive line positions together because it’s difficult to tell where someone will play in the NFL based on their position in college. Refer to the historical results article to see the attribute split by tackle and interior offensive line.

Seven offensive linemen scored in the 90th percentile of better for PFF WAR projection — Zion Johnson and Trevor Penning led the way. Both Johnson and Penning are currently being mocked as late first-round picks, so these results could push them up into the middle of the first round.

Potential No. 1 picks Ikem Ekwonu and Charles Cross participated in enough drills to qualify, though neither finished with impressive WAR predictions. Nonetheless, they did score well according to draft position, which means their fast 40-yard dash times will likely help them more than their slow weight-adjusted three-cone times hurt them.