Stanford had no answer for No. 9 Notre Dame’s fourth-quarter fireworks in South Bend Sunday night as their Bryce Love-less offense averaged -1.9 yards per play and turned the ball over once in the final 15 minutes of play, allowing the Fighting Irish to run away with the 38-17 win.

Notre Dame seniors Te’Von Coney and Jerry Tillery both made game-changing plays to help close out the game for the Irish on the defensive side of the ball. Coney, who entered the game with the 12th-ranked overall grade (85.9) among qualifying linebackers, intercepted Stanford junior QB K.J. Costello to set up a 35-yard Alize Mack touchdown just a play later. Standing tall as Notre Dame’s highest-graded defender (86.9), Tillery followed Coney’s interception with back-to-back sacks of Costello on the subsequent drive, hammering the proverbial nail in the coffin. 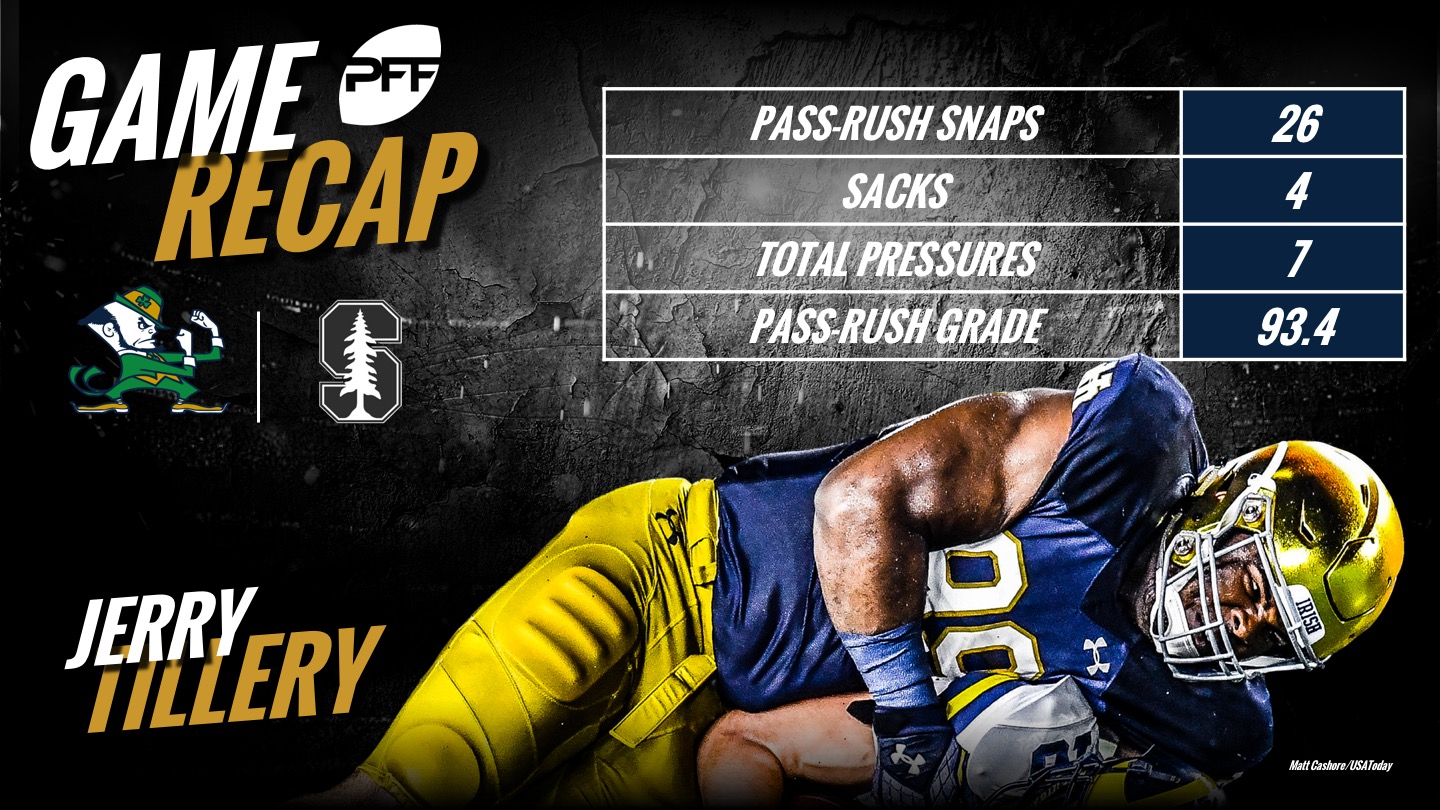 Offensively, junior signal-caller Ian Book and senior running back Dexter Williams were the men responsible for all five of Notre Dame’s touchdowns, as Book had four through the air and Williams added one on the ground.

Limited experience (just 266 snaps in three years) aside, Williams made the most of his opportunity, taking his first carry of the game – and the season – 45 yards to the house and piling on another 116 yards on his next 20 carries to help Notre Dame seal the deal. He tallied four runs of 10-plus yards and his five first-down runs paid dividends for the team’s offense.

Book also delivered against the Cardinal, earning a team-high and career-high 91.7 overall grade on the national stage. He completed 24-of-33 passes for 278 yards and four touchdowns but most impressively, completed 11-of-17 passes of 10-plus air yards for 237 yards and two touchdowns against Stanford, a testament to his downfield throwing ability.

Book, who completed 12-of-16 passes for 149 yards and two scores in the first half, picked up his second passing touchdown just 23 seconds before heading to the locker room for halftime. The newly-named starter connected with senior wide receiver Myles Boykin four times for 64 yards on the seven-play, 80-yard scoring drive before finding Chase Claypool for a 10-yard touchdown while rolling away from pressure. 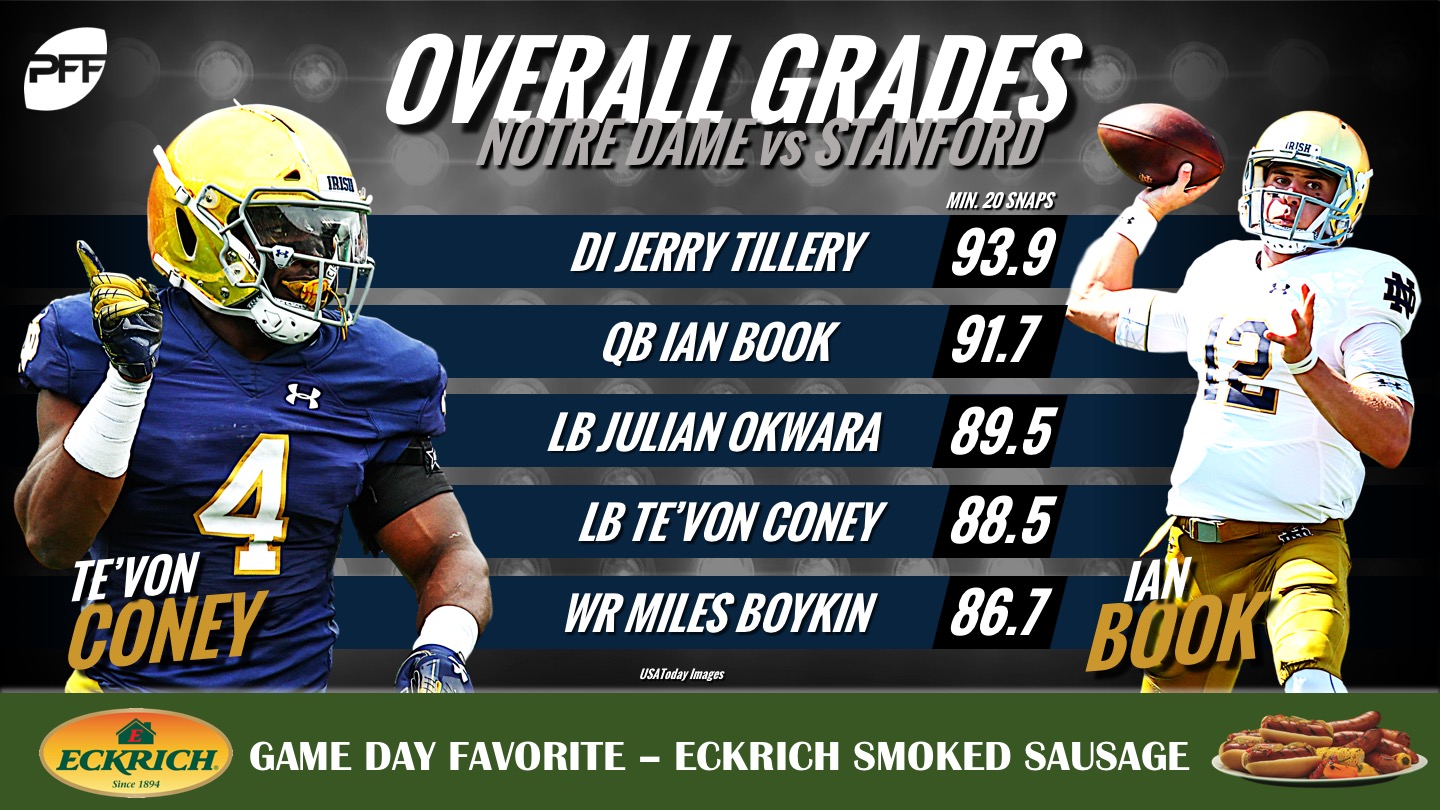 For Stanford, Love exited the contest with an apparent leg injury just three minutes into the fourth quarter when Notre Dame junior edge defender Julian Okwara came down awkwardly on his left ankle when tackling him from behind for a two-yard loss on 3rd & 21. He had 71 yards and a touchdown on his 16 carries prior to the injury.

Standout WR JJ Arcega-Whiteside entered the Week 5 contest with an FBS-high four contested touchdown receptions, as he added another to his highlight reel when he out-jumped Notre Dame’s Julian Love for a second-quarter touchdown.

The Fighting Irish, however, matched the efforts of Love and Arcega-Whiteside and then some in the first half before running away with it late.

Williams’ career game bodes well for the future of Notre Dame’s rushing attack, but the Fighting Irish will only go as far as Book takes them. Book & Co. open the next chapter of their undefeated season in Blacksburg, Va. To take on Virginia Tech.