There is still another week to be played and bowl games to be had, but at this time, we can take a hard look back on the 2018 season to date and decipher which true freshmen made the biggest splash in their debut seasons.

While we'll break this list out to a top 10 on offense and on defense after the championship games wrap up this weekend, here are the top 10 true freshmen, regardless of position, from the 2018 college football season.

This list of top true freshmen is brought to you by Eckrich, the Official Smoked Sausage of the College Football Playoff. 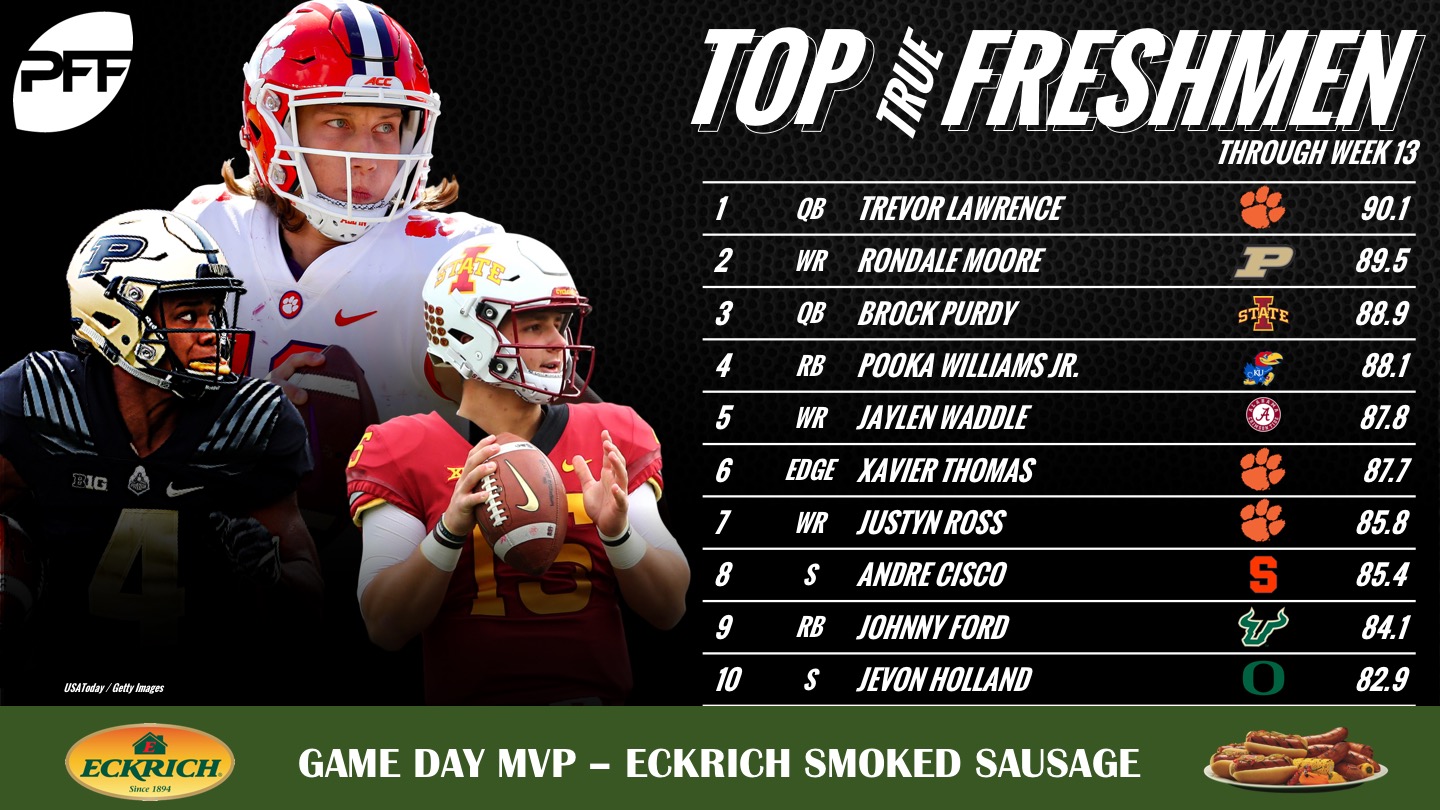 Lawrence is undergoing the highest-graded true freshman season for a quarterback since we began grading college back in 2014 as he's successfully changed the Clemson passing attack.

Moore's dominant performance against Ohio State was one for the ages but one we've become accustomed to seeing from him. In total, he leads the nation's receivers, regardless of class, with 822 yards after the catch.

Purdy took over for the Cyclones and the team didn't look back. Despite a hiccup against Texas, Purdy is 4-1 as a starter and has Iowa State not only back in the top 25 but back as a potential threat to win the Big 12 in the future.

Kansas won back-to-back games against FBS opponents for the first time since 2009 this season, and Williams was a big component of their success. Williams trails only Oregon State freshman Jermar Jefferson in total yards but he did so on 78 fewer carries as led all true freshman running backs with 48 missed tackles forced and 739 yards after contact.

Averaging a ridiculous 18.6 yards per reception, Waddle has been a big-play threat with Tua Tagovailoa throwing him the ball. His 149.3 passer rating when targeted is the highest among true freshmen receivers.

Thomas is second among true freshmen defenders with 21 total pressures, having done so, however, on 68 fewer pass-rushes than Merlin Robertson of Arizona State. He leads all freshman defenders in overall grade and with his 87.6 pass-rushing grade.

Ross not only leads true freshmen receivers but the entire nation's set of receivers with his 4.31 yards per route run average. On 146 snaps in route, Ross has gained 629 receiving yards on his 32 receptions.

A mainstay on this list all season long, Cisco logged 776 total snaps through 12 games for Syracuse, the third-most snaps for a true freshman defensive player. He leads all freshman defenders with an 89.9 coverage grade, recording seven interceptions and nine additional pass breakups.

Ford led all true freshman running backs with at least 75 carries in yards per attempt, edging out the aforementioned Williams with a 7.2 YPA mark. He has run for 36 combined first-down and touchdown runs this season as he broke 19 tackles on his carries.

Holland recorded four interceptions and four more pass breakups as his coverage grade of 89.4 is second behind only the aforementioned Cisco. He allowed just a 68.2 passer rating on throws into his primary coverage.