The analysis of quarterback play is really where PFF shines. Whether it’s our quarterback annual to Zac Robinson’s weekly breakdowns of some of the biggest stories at the position each week, it is from our rich data set that we generate the best insights at the position.

Today, we apply our quarterback clustering algorithm to our college data to spit out which quarterbacks are among the best. To briefly review our methods, we take the rates at which quarterbacks generate positively-graded throws, negatively-graded throws, big-time throws, turnover-worthy plays, air yards and yards per attempt into a dimension reduction algorithm that weighs how each variable (or, more precisely, a collection of the variables) contributes to overall variance in the data at the college level. Once this is done, we use k-means, a standard clustering algorithm, to group players using this adjusted data.

The clusters are as below, with a minimum of 200 dropbacks in 2018 as our threshold. In general, as in the NFL, the higher the cluster, the higher the quality of the players comprising the group. However, there are some clusters that are similar in quality — but different in style. These differences in style can often yield useful insights into developing comparisons at the NFL level, or eliminating potential draft prospects from consideration altogether.

While these clusters reveal a great deal of what has happened in college football during 2018, it is just the start of what will be a great collection of analyses that will grow and evolve as the Bowl season and offseason progress. Enjoy! 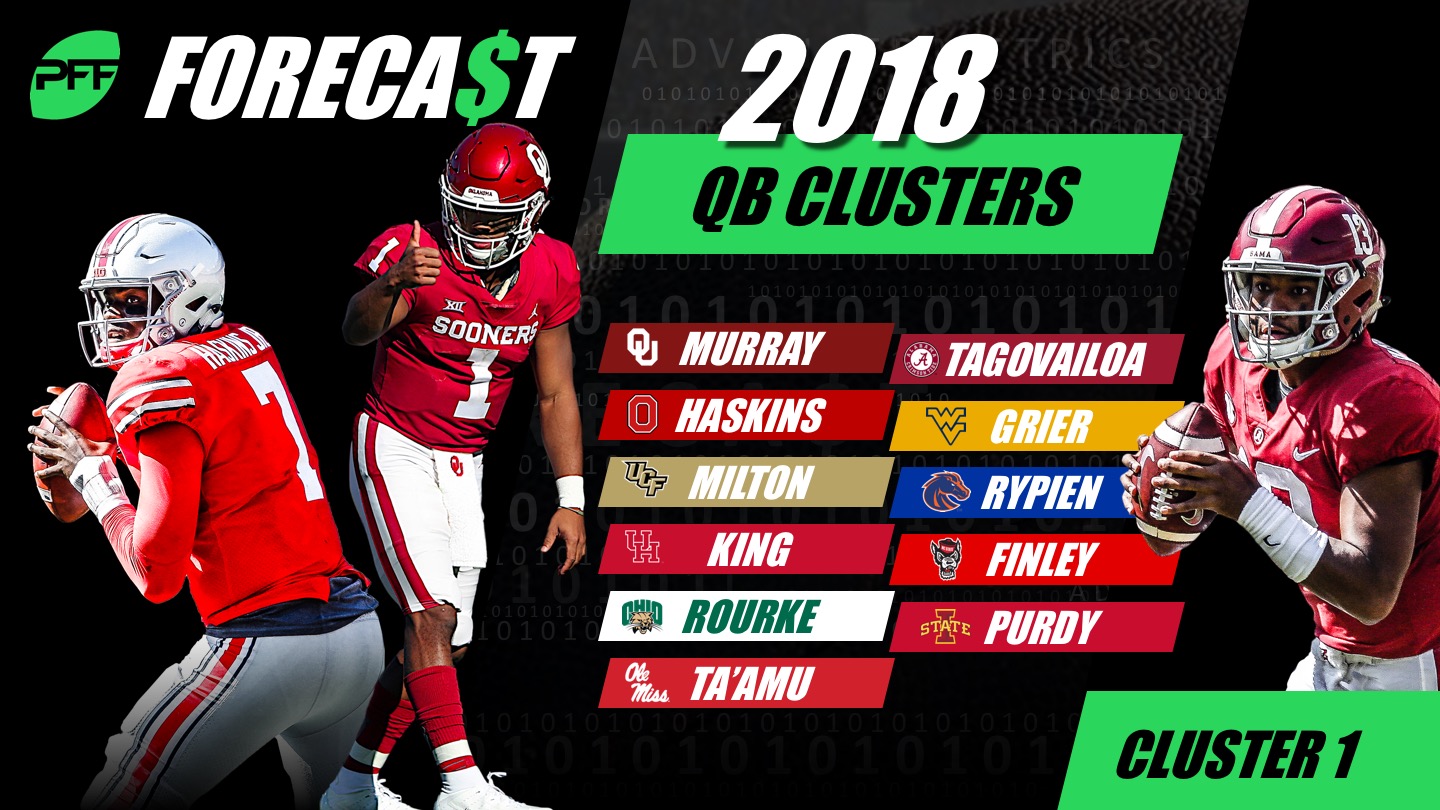 Kyler Murray: Murray collected the Heisman Trophy this past weekend, capping off an incredible season where he was the most electric playmaker in college football. With the highest percentage of positively-graded throws among Cluster 1 quarterbacks, Murray consistently made plays downfield with a yards in air average of 10.7. He severely limited bad plays with the second-lowest percentage of turnover-worthy throws among this cluster of quarterbacks while also posting the lowest negative grade percentage. He was also exceptional with his legs, something that this clustering process doesn’t place emphasis on. When you comp as a more athletic version of Russell Wilson, it begs the question whether NFL talent evaluators will make the same mistake twice and not make him a high draft pick this offseason.

Tua Tagovailoa: Just like in the Heisman race, Tagovailoa slots in right behind Murray in the discussion of elite quarterback play in 2018. Tagovailoa registered the highest percentage of big-time throws in this cluster but his overall positive grade percentage was almost 10 percentage points lower than Murray. Despite similar yards per attempt, Tagovailoa averaged over a yard less air yards per attempt than Murray which reflects the superior supporting class that the Crimson Tide operated with. Tagovailoa also posted the second-highest negative grade percentage among quarterbacks in this cluster. He's a dynamic quarterback who elevated the play of Alabama but the Crimson Tide would still be in the playoff discussion without him at quarterback whereas Oklahoma may not even be ranked in the top 25 if it wasn’t for the brilliant play of Murray.

Dwayne Haskins: A distant third choice for the Heisman, Haskins has been one of the most productive quarterbacks in the history of Ohio State football. He led all Big Ten quarterbacks in expected points added per dropback (0.32), and while his team was able to generate 1.13 passing yards for every one of his air yards, much of this dynamic can be attributed to the fact that over a quarter of his dropbacks have been positively-graded and over five percent were given a “big-time throw” designation. While he’s likely a bit overrated from a PFF perspective (he’s very much on the edge of this cluster, and could easily be in the second group) it remains to be seen how good of a pro prospect he’ll be, should he come out for the 2019 NFL Draft.

Will Grier: Outside of an early season clunker against Iowa State, Grier consistently elevated the play of those around him. If it wasn’t for his two costly fumbles, West Virginia could have upset Oklahoma and squashed any hope of a Big-12 title or playoff berth for the Sooners. In that alternate universe, Grier easily could have been the Heisman hopeful replacing Murray with his play in 2018. He posted the fourth-best big-time throw percentage among Cluster 1 quarterbacks. Unsurprisingly, it was his propensity for turnover-worthy throws that stuck out and in the end was his undoing.

McKenzie Milton: Hopefully Milton is able to overcome his gruesome in-game knee injury to return to the level he displayed in 2018. Milton was very middle of the pack in almost all categories among this group of Cluster 1 quarterbacks, and, surprisingly, UCF hasn’t had as significant of a drop off as expected due to his injury. He has the second-highest air yards per attempt yet the second-lowest yards per attempt among this cluster, which shows the inability of his pass-catchers to generate any yards after the catch.

Brett Rypien: After a sluggish early season start where the Broncos dropped games to Oklahoma State and San Diego State, Rypien emerged as one of the best quarterbacks in college football. His high-risk, high-reward play resulted in the third-highest percentage of turnover-worthy throws among this cluster. He was fifth in air yards per attempt but second to last in yards per attempt. Of Rypien's 3,705 passing yards, only 35% came after the catch which was the 12th-lowest rate in the country. This is a big distinguisher between quarterbacks in the Cluster 1 vs. Cluster 2 conversation; how reliant were they on yards after the catch to generate production. Rypien was one of the best at maximizing offensive production through air yards in 2018 and did it at one of the lowest contested throw rates in the FBS.

D’Eriq King: King quarterbacked one of the most entertaining offenses in the FBS in 2018. His turnover-worthy throw percentage of 1.8% was the lowest among Cluster 1 quarterbacks while he did have the fourth-highest percentage of negatively-graded throws, showing he did make mistakes just not the type of ones that result in turnovers. His average depth of throw was the 11th-highest in the FBS and King’s other stats compare very similarly to Rypien as he posted a high air yards per attempt but that didn’t translate to a high yards per attempt due to a lack of yards after the catch. King lost a few tough games down the stretch and was finally shut down due to a meniscus tear.

Ryan Finley: When talking about distinguishers between Cluster 1 quarterback play and those of other groupings, air yards, a lack of yards after the catch and the ability to elevate the play of pass-catchers continue to be highlighted. None of this is more apparent than in the 2018 season of Finley. Some may be surprised as to his inclusion in this cluster but Finley had the second-lowest percentage of yards after the catch per total yards of any quarterback in a Power-5 conference. Finley had the second-lowest percentage of negatively-graded throws among quarterbacks in Cluster 1, which shows his ability to not throw costly turnovers. Surprisingly, he had the fourth-highest percentage of contested throws at 21%, in the FBS. His big play ability was lower than most in this cluster but he thrived when delivering into tight windows, something that has to be done to be effective at the next level.

Nathan Rourke: Rourke is our only quarterback from the MAC conference to make it into the elite cluster of quarterbacks as he posted the second-highest percentage of big-time throws among quarterbacks in this cluster. He was the epitome of high risk, high reward as he also had the highest percentage of turnover-worthy throws. His average depth of throw was the 13th-highest mark in the FBS and once again he received very little help from his pass-catchers generating yards after the catch.

Brock Purdy: True freshman Purdy impressed in his first season of college football. His 11.3 air yards per attempt were the highest mark of any quarterback in Cluster 1 but he was middle of the pack in big-time throws and positively graded throws. One of the biggest points of emphasis in the offseason should be in him limiting his turnover-worthy throws as he had the second-highest percentage among quarterbacks in this cluster. The future appears to be very bright for Purdy if he can continue on this trajectory and he will hear his name called very early in the NFL draft one day.

Jordan Ta’amu: Rounding out our group of elite Cluster 1 quarterbacks is Ta’amu of Ole Miss. Ta’amu had the lowest percentage of big-time throws among quarterbacks in this cluster but his other stats align closely to those in this group with a high average depth of throw and contested throw percentage. He did receive the most help from his pass-catchers among any quarterback in this cluster, unsurprisingly with the level of NFL talent at receiver he had. Still, playing in the SEC, he faced the toughest defenses of any quarterback on this list.

This group has the second-highest raw PFF grade per snap and yards per attempt, but does so with just the fourth-highest mean air yards per attempt. This results in a group whose rate of negatively-graded throws and turnover-worthy throws is the lowest among the groups.

At 7.71 air yards per attempt, this group has the lowest depth of target among the six clusters, and as a result, a negatively-graded throw rate that is about the same as Cluster 1.

At 5.97 yards per pass attempt, this is college football’s least efficient group of passers. They take more risks than Cluster 4 (with an average depth of target of 8.2 yards) but those risks result in fewer positively-graded passes than any group.