College football is full of talented players across the nation and with our proprietary PFF play-by-play grading, we take a look at some of the players to watch across the first weekend's slate of action at the FBS level.

[Editor's Note: All of PFF's ELITE subscribers can preview all the FBS games in Week 1 in PFF Greenline, an online dashboard loaded with predictions for the spreads, point totals and moneylines. Subscribe today to gain access!]

Ridder compares to Clemson QB Trevor Lawrence and Houston QB D’Eriq King in one particular statistic at PFF, and that’s the measure of big-time throws against turnover-worthy passes. His 25 BTTs are ninth-most, just two shy of Lawrence while his six TWPs are tied with King for eight-fewest among qualified signal-callers. All this means Ridder knows when to take his shots and how to protect the football and big things are on the horizon for him and the rest of the Luke Fickell-led Bearcats. 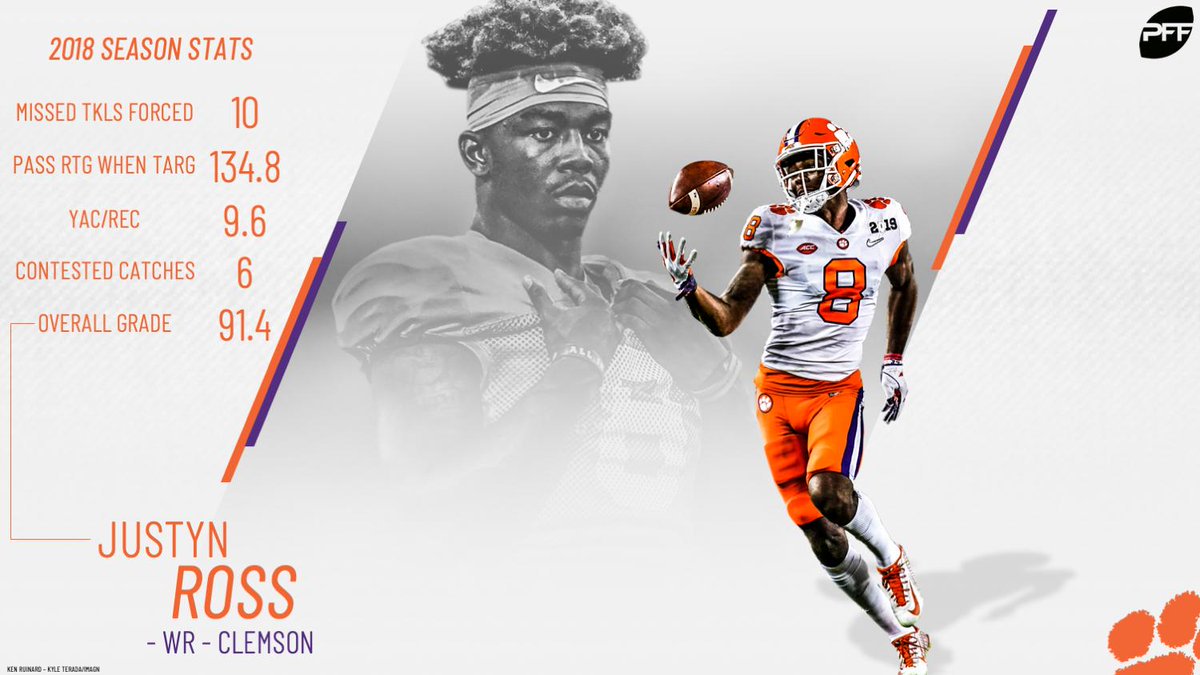 If Ross could have entered the NFL draft this past year, he likely would have heard his name called sooner as opposed to later and that would be with just one year of college football under his belt. Rejoice, Clemson fans, as the nation will get to see him in Orange for at least two more seasons but that’s just how dominant he was in his first season at Clemson. In 2018, Ross put forth the highest-graded season we’ve ever given to a true freshman receiver and his 21.7 yards per reception is the highest among qualified returning receivers. The sky is truly the limit for this uber-talented receiver-quarterback combination with Lawrence throwing him the ball. His 4.98 yards per route run were a clear 1.0 yards ahead of the next closest receiver last year.

Love can sling the ball around the field and returns with 15 touchdown passes on deep targets – the third-most among active quarterbacks. He likely would have had more than that had he not seen five of his deep targets go down as drops. Nevertheless, Love is a dynamic guy with the ball in his hands and can hit all levels of the field with relative ease. He’s another guy from the Group of 5 that if he puts forth as successful of a season like he did last year, that could hear his name called early in connection with the draft. There are even some scouts that have said he has some ‘Patrick Mahomes-esque' moments.

Dillon is a wrecking ball when he reaches the defense, recording a grand total of 117 missed tackles on his 525 carries the past two seasons. He's gained 1,876 of his 2,696 rushing yards after contact and 119 combined rushing conversions (first downs + touchdowns). He's come a long way from being recruited as a linebacker as Michigan to one of the nation's top running backs and a solid year for BC could vault him into NFL draft stardom. 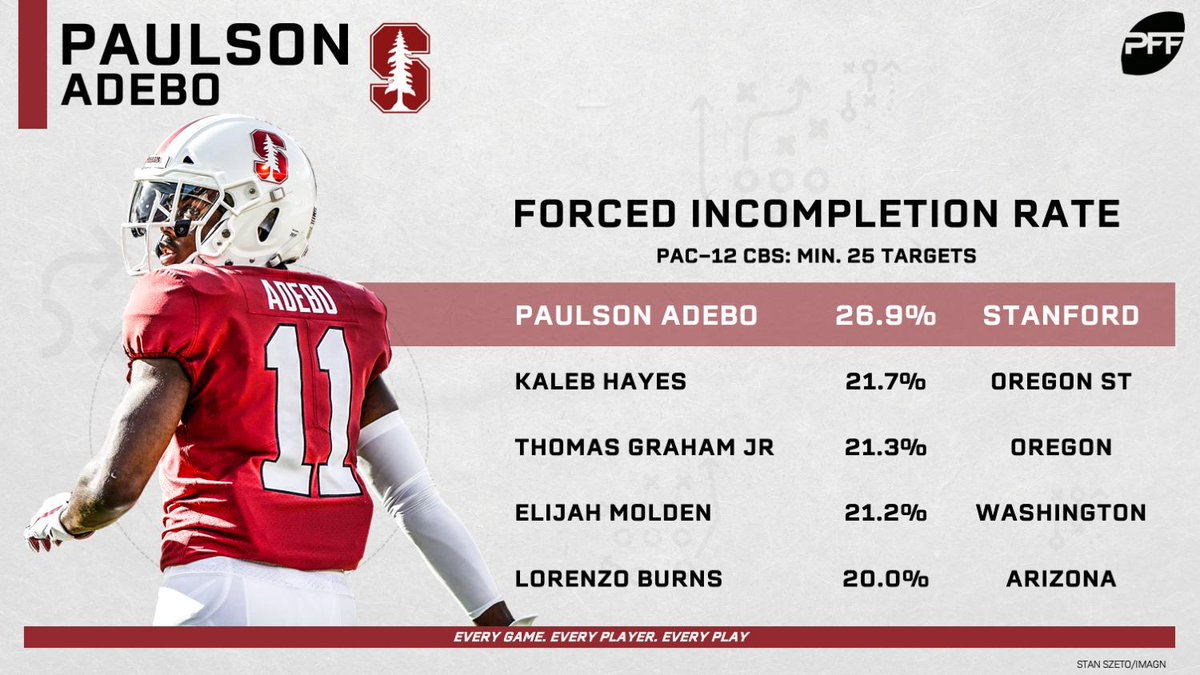 Widely underappreciated because of his location on the west coast, Adebo is every bit of a lockdown corner as one would expect. On 78 targeted passes a season ago, Adebo recorded four interceptions, 19 pass breakups and allowed no reception longer than 28 yards. He’s currently the owner of the Power-5’s fourth-highest coverage grade since 2017 and he’s forced an incompletion on 26.9% of his targets in that span. Adebo is solid against the run as well and is arguably one of the more well-rounded cornerbacks for 2019.

After struggling through injuries a year ago, Taylor put the NFL on hold to come back for another season in Tallahassee. If he can return to the form that saw him leap into the national picture in 2017, he'll become a lockdown element in what should be a much-improved secondary for the Seminoles. In that 2017 season, Taylor allowed just 37.1% of the targets his way to be completed, recorded two interceptions and held quarterbacks to a paltry 28.5 passer rating when targeted. He's got sticky coverage skills and plays much bigger on the field in run defense and in coverage.

Perkins gets it done mainly with his legs but that doesn’t mean he isn’t a more-than-capable passer. Still, he had more rushing attempts than any non-option quarterback and his 46 missed tackles forced on the ground lead all returning FBS quarterbacks, even those who run their option attacks. His rushing ability is not in question and nor should his passing ability as he returns with a top-10 mark in adjusted completion percentage.

Reed’s prowess in coverage stands out as he returns with the fifth-highest coverage grade among active safeties. He allowed just 8.6 yards per reception, 6.1 yards per target and no reception longer than 36 yards into his primary coverage a year ago while still being able to stick his nose into run defense. If he can tidy up his tackling (14 missed tackles on 79 attempts), Reed can skyrocket into stardom and eventually a high spot into the NFL draft.

Brown is the nation’s highest-graded interior defensive lineman over the past two seasons and he does it all over the field. Since 2017, he’s made 81 total tackles with just four missed attempts as 24 of his tackles in run defense have come either at or behind the line of scrimmage, a number that leads the nation. He gets after the passer just as well, to the tune of 52 total pressures since 2017, the fourth-most pressures in the nation as he’s won 11.2% of his pass-rushes in that span. 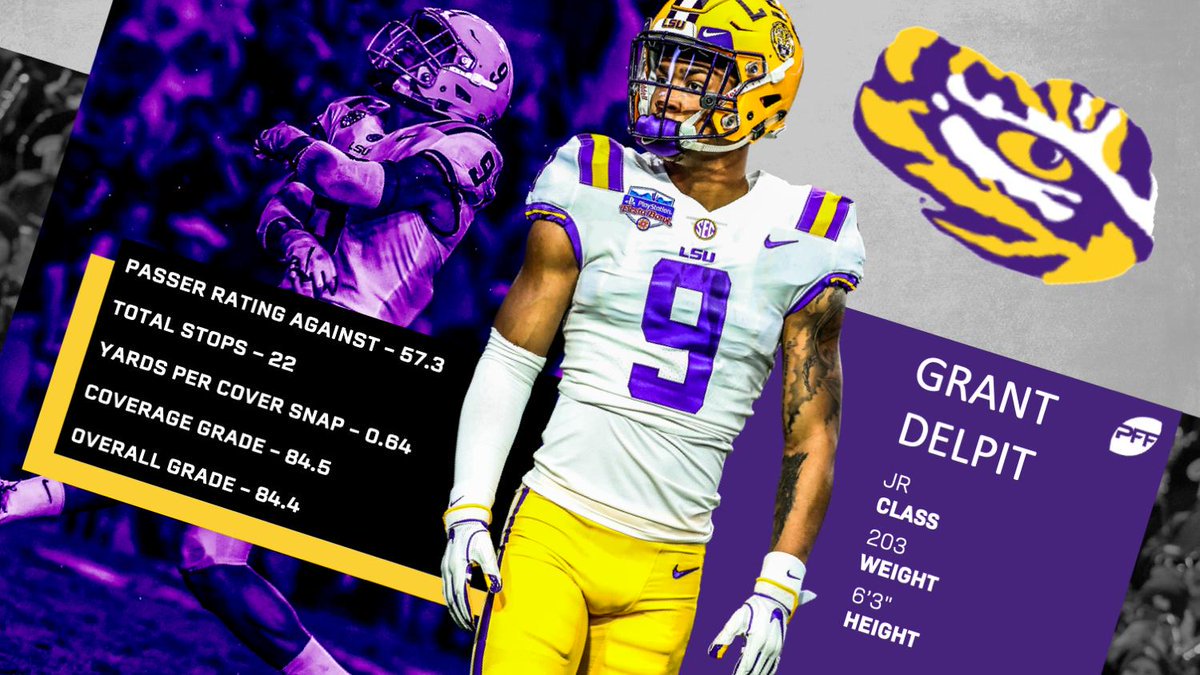 With a mistaken arrest now behind him, Werts can approach the season without any hindrance. In the passing game alone, he increased his accuracy, grade, yards per attempt and took care of the ball like a seasoned veteran last year while in the rushing attack the Eagles offer, he was as dynamic as any other option quarterback. On 153 designed carries, he tallied 755 yards while his 58 total rushing conversions moved the chains or scored six points on nearly a third of his carries.

Delpit has recorded the nation’s second-most pressures at the safety position as he brought in 13 on just 39 blitz attempts while making 22 defensive stops. In coverage, Delpit has made 19 total plays on the ball over the past two seasons including six interceptions while he drastically improved his coverage grade from Year 1 to Year 2. He didn’t allow a reception longer than 32 yards in 2018 and saw just a 57.3 passer rating as the primary coverage defender. The aforementioned missed tackle woes aside (16 MT on 81 attempts), SEC quarterbacks should expect to see and hear a lot of Delpit this season.

King is perhaps the nation’s most electric player with both his arm and legs, King leads the Cougars in 2019 behind the second-highest overall grade from a quarterback a season ago. He had four games with elite grades and another three with ‘very good’ grades while he torched defenses on the ground to the tune of 7.6 yards per attempt. For his career, he’s gained 1,227 yards on the ground and thrown for another 4,255 and he’ll certainly the Houston leaderboards in each of those statistics this season.

Brooks and Sermon form perhaps the best 1-2 combo at running back in the country. Brooks forced 37 missed tackles on those 119 carries and averaged an astounding 8.8 yards per attempt. Sermon leads all FBS running backs over the past two seasons by forcing a missed tackle once every 0.34 carries. His 96 total missed tackles forced on carries are the fourth-most among all returning backs, except he’s done it on 100 fewer carries than the three running backs ahead of him. He possesses a strong frame that is tough to take down, incredible balance through contact and is must-watch TV in 2019.

Underrated by some entities, Okwara has improved his overall grade in each of his years on campus for Notre Dame. His 2018 season saw him reach elite heights with his pass-rushing, recording 61 total pressures that included nine sacks and 12 more QB hits. His 26 defensive stops were up there with the nation's best returning to the position and with another year of elite pass-rush grades, the nation will certainly remember the name.