The 2019 season begins this weekend and with that, the full set of 2018 data officially becomes history. We look ahead towards the top-graded players returning in each conference, keeping things going with the B1G. 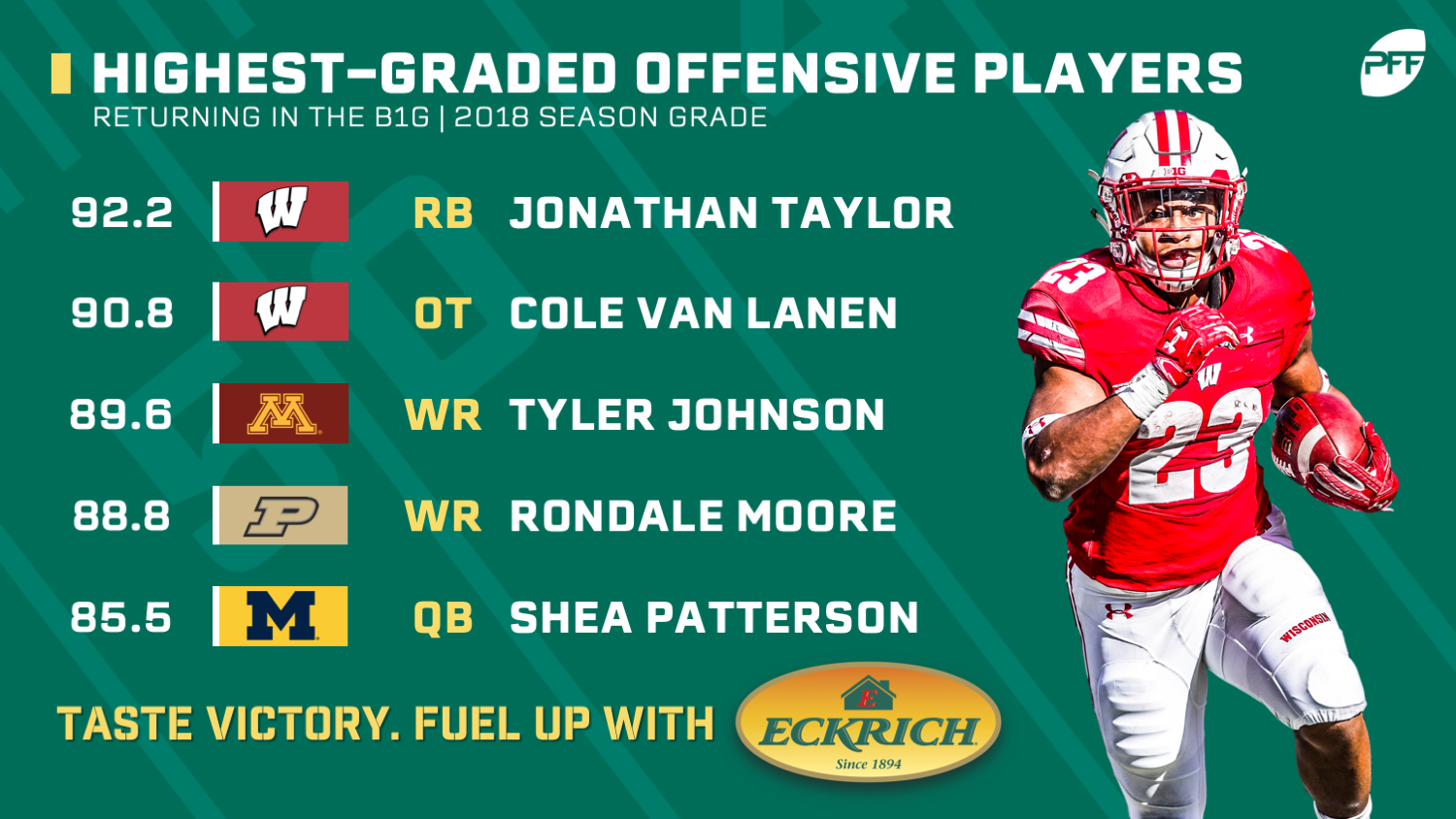 Fields and Penn State's Sean Clifford are the newbies on the list of top-graded quarterbacks as Fields flashed elite-level talent while at Georgia last year and four of the five completions Clifford threw last year went down as big-time throws. Patterson is the highest-graded full-time starter from a year ago and Martinez really turned it on in Scott Frost's offense down the stretch.

Taylor has reached levels of elite grades and elite stats in consecutive seasons as he's topped 66 missed tackles and 1,300 yards after contact in 2017 and 2018. He's the class of running backs right now and returns to set the tone for another season in Madison.

The best group of receivers returns overall to the Big Ten this year as Johnson and Moore have elevated themselves into the national picture for top receiver in the country. Johnson is the highest-graded in the red zone and on money downs while Moore's 37 missed tackles forced after the catch lead the next closest receiver by eight.

Ferguson is the highest-graded among the group, hauling in 36 catches for 27 combined receiving conversions (first downs + touchdowns). Hopkins is the after-the-catch threat of the group, racking up 283 yards after the catch and averaging 17.1 yards per reception.

Wirfs and Jackson lead the charge in terms of draft projection from the Big Ten this season but Van Lanen was utterly dominant in each facet a year ago. His run-blocking grade is clearly the best in the conference while he allowed just six total pressures on 223 pass-blocking snaps last season.

The highest-graded returning guard by a long shot, Jackson transfers from Rutgers to the Buckeyes and immediately bolsters their offensive line. The duo from Minnesota is largely going underrated while Miranda played just 120 snaps last season but with great success.

Biadasz is the next in line from the factory of offensive linemen from Wisconsin to the NFL after dominating the competition last year. He leads the returning Big Ten centers by over 10 grade points in run blocking while he allowed 11 combined pressures from 332 reps in pass protection. 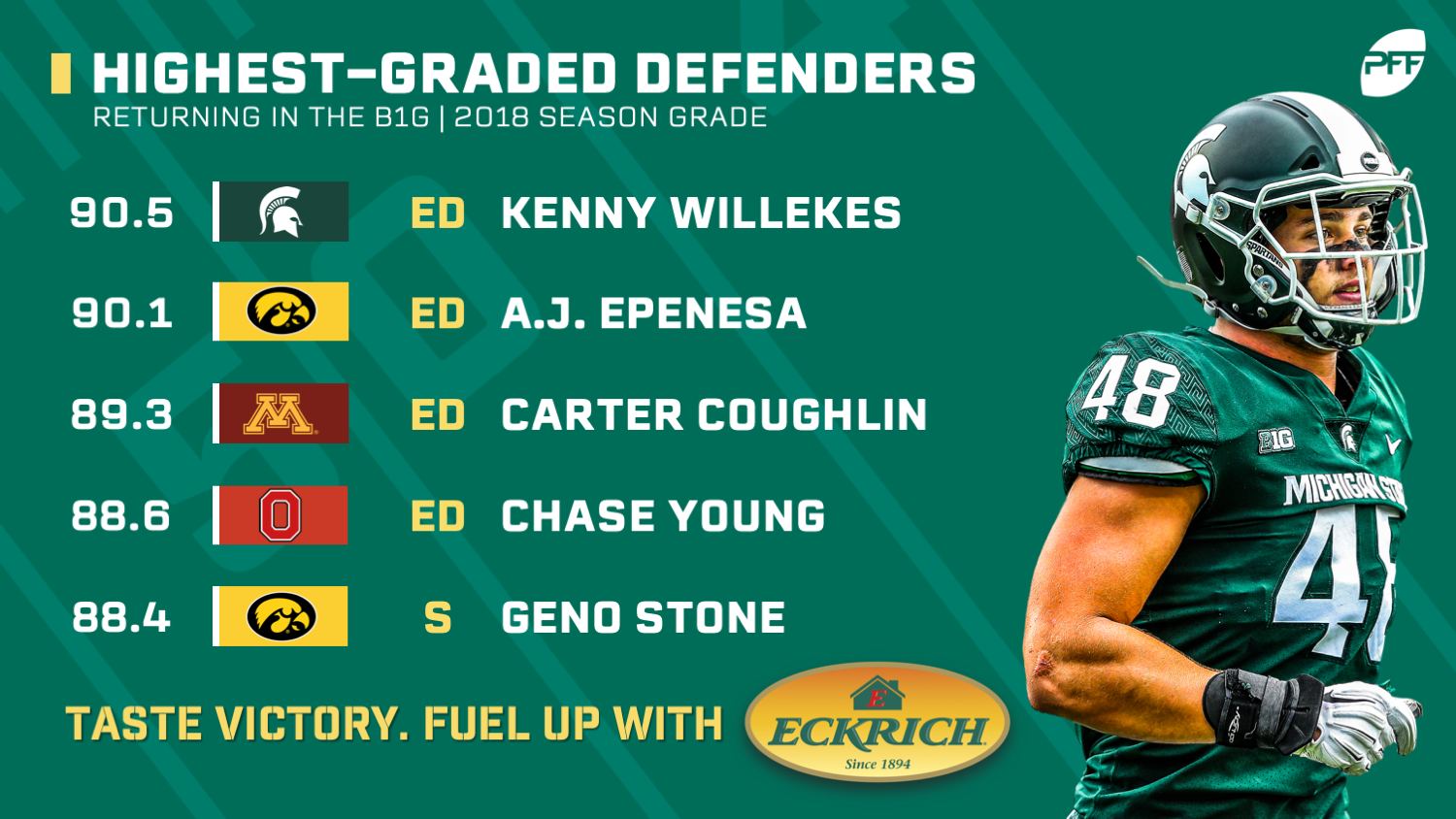 The leader in total QB pressures over the past two years highlights the pass-rushers returning to the Big Ten as they return the nation's best group of rushers. Young led all edge defenders in total pressures last year as he and Willekes will battle for the top spot this season.

Williams and Panasiuk return along the Spartans defensive line with Willekes as they form a formidable front for any Big Ten offense sparring against them. Hamilton was a stout run defender a year ago while Landers complemented him nicely on the pass-rush.

Bachie, Fisher and Bailey each played over 870 snaps a year ago with the latter two topping 1,000 for their respective defenses. Bachie led them all in run-defense grade while Bailey leads the returning linebackers in coverage grade, allowing just 7.8 yards per reception as the primary coverage defender and no touchdowns allowed.

Durr returns as the leader in overall grade while Bootle is the conference leader in pass breakups with 15. In fact, those 15 pass breakups lead all-Big Ten cornerbacks in total plays on the ball while Castro-Fields saw the lowest passer rating when targeted among the group at the top. Thomas played just barely 100 snaps but looked sharp in all facets a season ago.

Williams logged just 242 snaps including just 154 in coverage but was targeted 12 times on those snaps. He allowed five receptions with two interceptions and two more pass breakups in his limited snaps. The Northwestern duo each was strong in coverage allowing just 39 total receptions on 67 combined targets with four interceptions (all from Pace) and eight more combined pass breakups.