It gets real now for PFF’s No. 2 Georgia Bulldogs. The upcoming four-game stretch of current Top 25 opponents will determine the Bulldogs’ SEC fate and whether or not a trip back to the SEC Championship game and the College Football Playoff is a possibility – and it starts this week in Death Valley against our No. 14 LSU Tigers. As only we at Pro Football Focus can, let’s focus on some finer detailed areas to watch in this mid-season SEC clash.

This preview feature is brought to you by Eckrich, the Official Smoked Sausage of the College Football Playoff.

Who can make plays against the opponent's secondary?

Each team has multiple big-time players in the secondary, starting with shutdown corners Deandre Baker (90.2) of Georgia and LSU’s Greedy Williams (74.9). Baker is currently PFF’s No. 1 cornerback, allowing a passer rating of only 35.2 into his coverage with eight combined pass breakups/interceptions and 15 yards after the catch on 14 receptions. Williams has allowed just 15 receptions on 34 targets and a passer rating of 38.7 to go along with five pass breakups/interceptions. 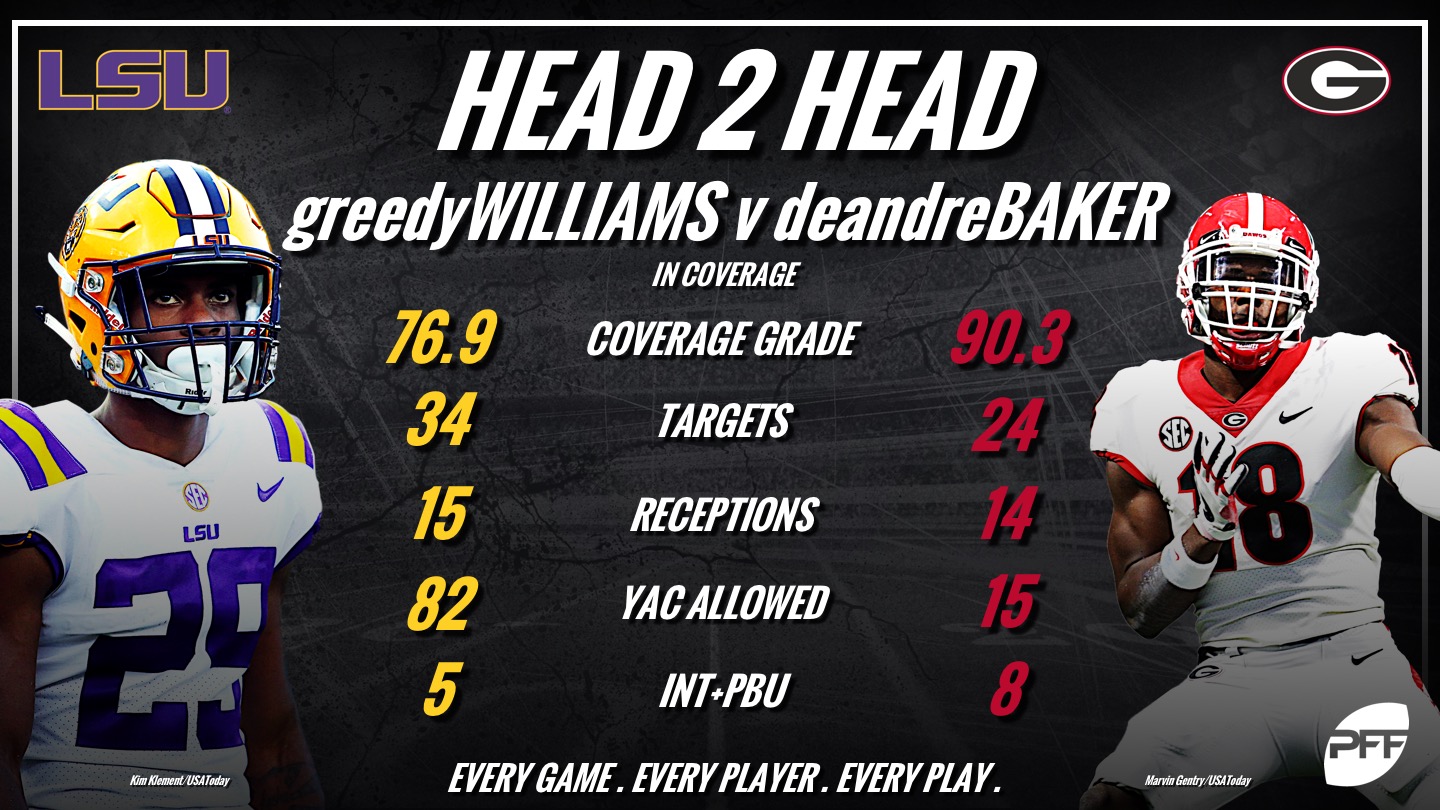 It doesn’t end there either. For Georgia, our highest-graded defense and coverage unit, Richard LeCounte (84.4) and J.R. Reed (82.8) form one of the best safety combinations in the nation, while true freshman CB Tyson Campbell (75.7) continues to improve weekly. Overall, quarterbacks have been fearful of testing the Bulldogs secondary down the field, as their average depth of target against them is 6.2 yards – second lowest in the nation. For the Tigers, Kristian Fulton (74.6) has given up a couple of big plays, but otherwise been solid in his own right opposite Williams, allowing 10 receptions on 28 targets and five pass breakups. Safety Grant Delpit is their overall second-highest graded defender (78.8) behind LB Devin White (83.0). The Tigers aren't afraid to use Delpit as an extra rusher as well, as his 10 total QB pressures on 21 pass-rushes are second-most nationally among safeties.

Given each team’s strength in coverage, look for both to blitz early and often and rely on that coverage strength.

Recently, we named the Georgia offensive line our No.1 group thus far this season and last week examined how effective they’ve been at both blocking and tackling. This will be a point of emphasis this week especially given the dynamics of LSU’s offensive.

The Tigers are 44th in the FBS in run-block grade (66.6) and, thus, their backfield duo of Nick Brossette (77.5) and Clyde Edwards-Helaire (79.4) have had to do the majority of their damage after contact. In fact, 64% of the Tigers’ rushing yards have come after contact. It helps that both Brossette and Edwards-Helaire are good at forcing missed tackles, as they have combined to force 45 missed tackles. Contrast that to the Bulldogs running game, where their entire team has only forced 35 missed tackles and only 53% of their yards have come after contact. Thus, can the Tigers’ offensive line get their backs yards before contact or the will their backs force our No. 1 tackling grade Georgia defense to miss? The latter is something that has only happened 25 times in six games.

Which QB will get pressured?

In general, pressuring a quarterback negatively impacts their play, to the tune of a 40-point drop in passer rating on average. Georgia QB Jake Fromm and LSU QB Joe Burrow are no different in 2018. A look at the two quarterbacks when kept clean this season: 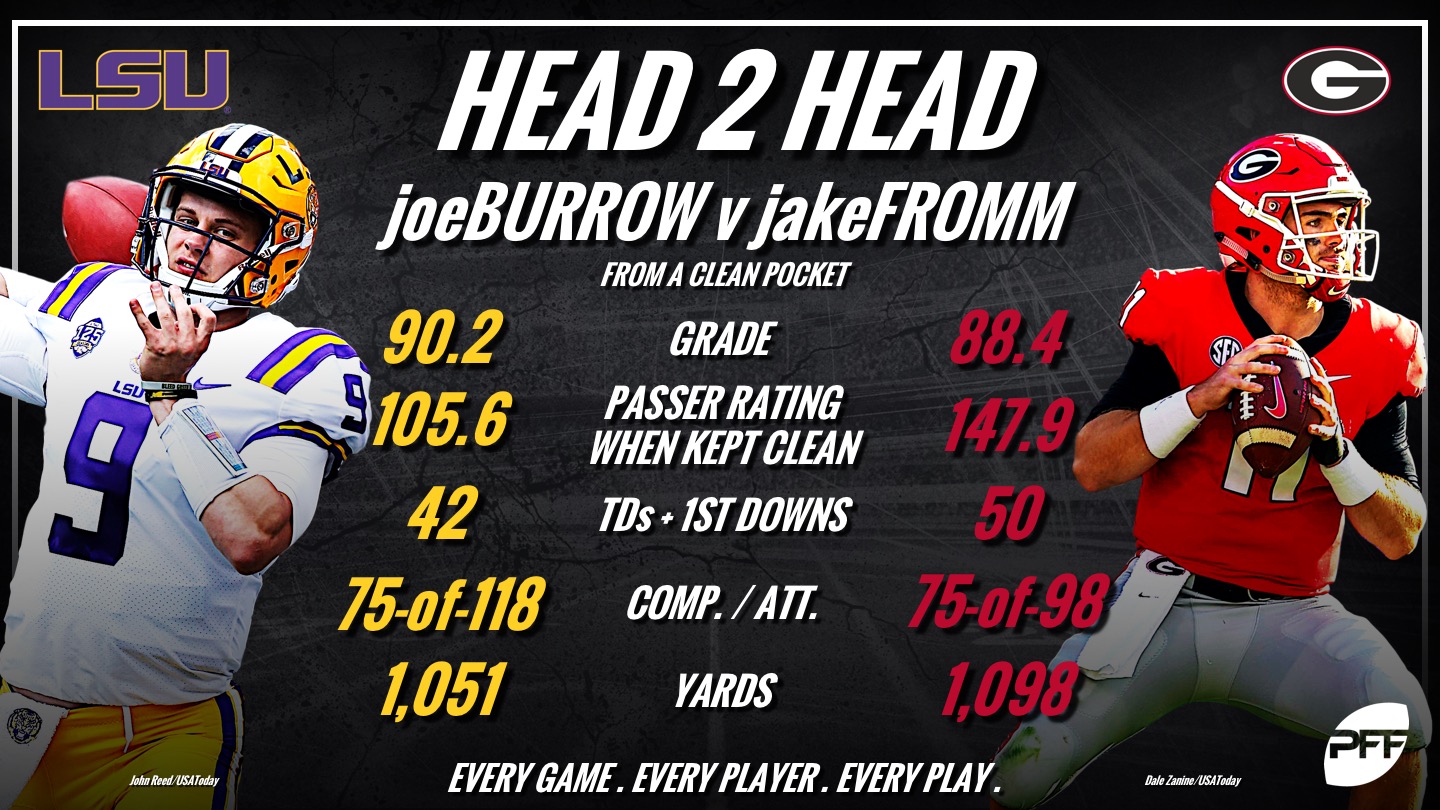 The heading question remains, though. Georgia’s dominance on the offensive line was just mentioned above and that has translated to pass-blocking as well. Fromm has only been under pressure on 18.4% of his dropbacks, fourth-fewest in the nation. Burrow, on the other hand, has been pressured on 32.8% of his dropbacks. While one would look at those numbers and think they could predict who will be under more duress during the game, it is not that simple. Georgia does not pressure the quarterback at an elite level, only averaging 10.3 total QB pressures per game, and they only have one defender, D’Andre Walker (84.4), with double-digit pressures. The Tigers, however, have five defenders with double-digit pressures at this point and average 17.7 total QB pressures per game.

If it comes down to a kick

All of the above could equal out and the game could possibly come down to a final kick. If so, each team is well equipped for the situation as two of our top seven kickers are involved. LSU’s Cole Tracy (87.5), our fifth-highest graded kicker, has already made that type of pressure kick against Auburn earlier in the year. He is a perfect 10-of-10 on attempts of 49 yards or less and made 2-of-4 from 50-plus. His counterpart, Georgia’s Rodrigo Blankenship (85.7), has been equally impressive, making 9-of-11 attempts, including a 53-yarder last week against Vanderbilt that would have been good from 60-plus.