The PFF No. 2 Georgia Bulldogs return home this week to face a 2-2 Tennessee Volunteer squad fresh off a 26-point home loss to Florida. While Georgia generated numerous big plays in every phase at Missouri a week ago, including a scoop ‘n score touchdown on defense and punt block return for a touchdown on special teams, they were not the overwhelmingly dominant team they’d been in the season’s first three games.

This feature on Georgia is brought to you by Eckrich, the Official Smoked Sausage of the Georgia Bulldogs.

We shift the focus today and look ahead towards the meeting with Tennessee, looking at some key areas where the Bulldogs found success last week that they can ride into their second of seven straight SEC contests.

The lack of pass-rush was often discussed over the first three weeks of the Bulldogs’ season.  We specifically highlighted it last week in our preview of the Missouri game. Going into last Saturday’s contest, they had only accumulated just 15 total quarterback pressures, one sack, and a pass-rush win percentage of 5.4 percent, which was tied for 124th nationally. And based on their previous history against Drew Lock, we thought head coach Kirby Smart and defensive coordinator Mel Tucker wouldn’t blitz much given previous games as well as the veteran Lock’s success against the blitz (139.8 passer rating).

Well, that all changed Saturday. The Bulldogs blitzed early, identified an advantage and continued to aggressively blitz throughout the game. The Georgia defense sent extra rushers against Lock on 18 occasions, tied for the most blitzes in a single game during the Kirby Smart era and more than they had in the previous three games combined (16). It was effective too.  Against the blitz, Lock was only 7-of-19 for 85 yards with one interception and a 42.5 passer rating. 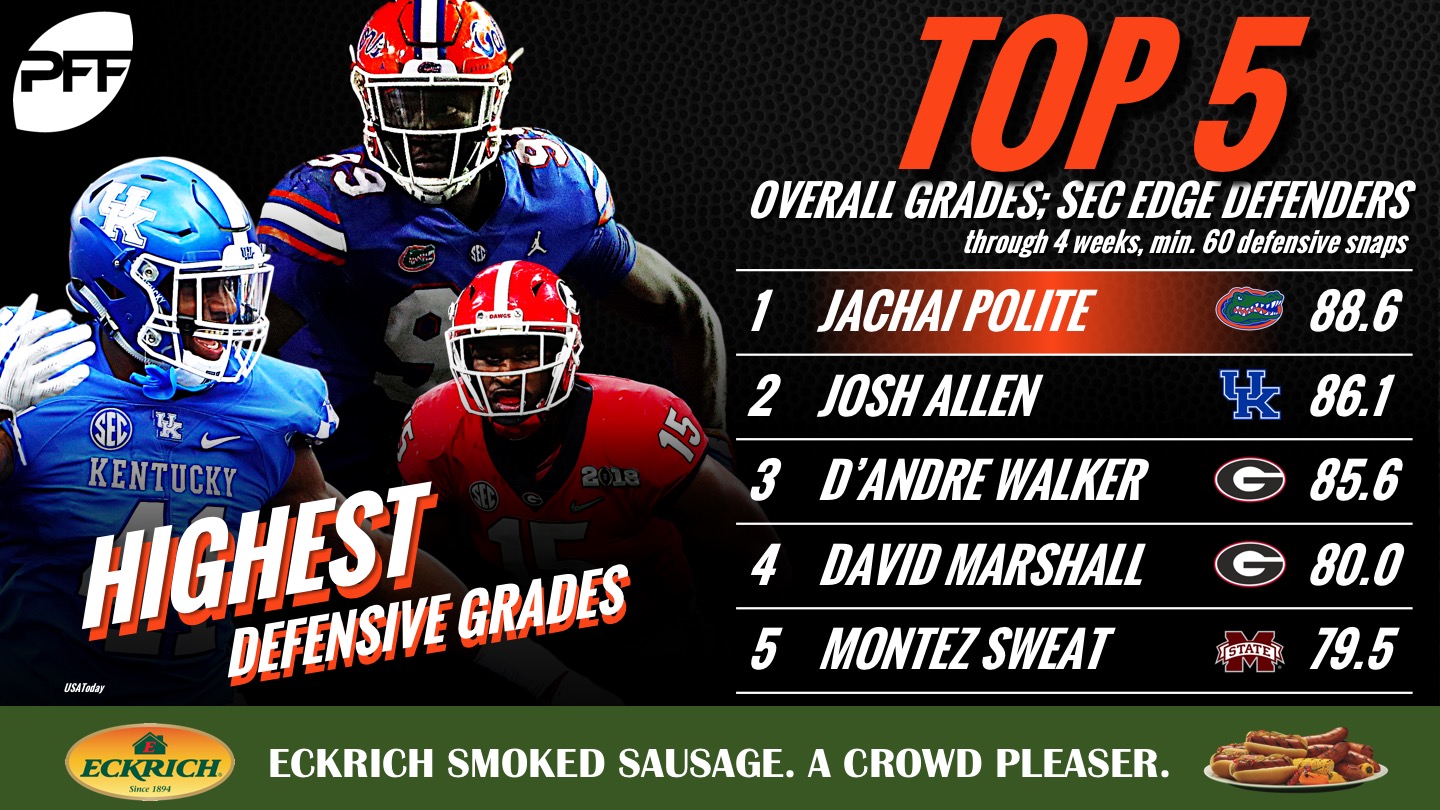 Overall, the entire Georgia pass-rush woke up, led by senior edge defender D’Andre Walker and his eight total QB pressures and 88.2 game grade. In total, the Bulldogs defense accumulated 25 total QB pressures, the most in a game in the Kirby Smart era.

The other side of the line of scrimmage is a different story as Georgia has dominated in the trenches offensively. Our SEC offensive line rankings this week saw the Bulldogs’ group at the top. As a unit, they have the No. 2 overall pass-blocking grade (93.2) and have only allowed 10 total QB pressures (one sack), which is tied for third fewest in the FBS among teams with at least 100 passing snaps. In addition, they have the overall No. 2 run-blocking grade (84.3). Before the leg injury to Ben Cleveland, here is where their five starters ranked among those qualifying at their position:

While Thomas is working back from an ankle injury and appears likely to play this week, Cleveland broke a bone in his leg and is out indefinitely. True freshman Cade Mays appears to be the likely starter at right guard and has already played 171 snaps this season and only given up one QB pressure on 65 pass-blocking snaps thus far.

The Bulldogs also happen to have PFF’s highest-graded overall defense (94.6), led by its outstanding and top-ranked coverage unit (95.5). While Missouri’s Emmanuel Hall was slowed by a groin injury, Deandre Baker, our No. 1 corner (89.5), still completely removed him from the game. Hall did not have a catch on only two targets. Baker has only allowed a 32.6 passer rating into his coverage and he’ll have another test this weekend with Tennessee’s physical WR Marquez Callaway (77.0). 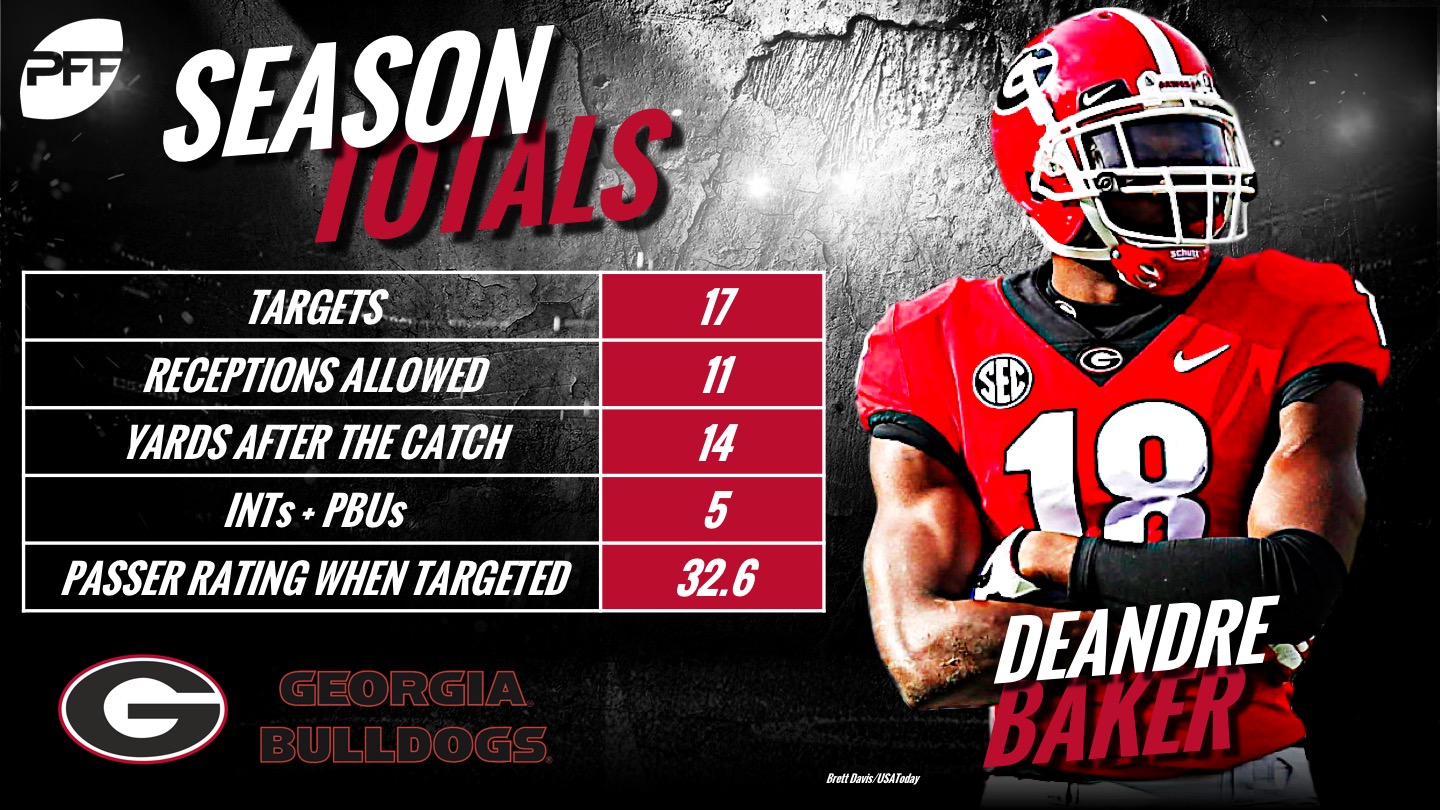 Safeties Richard LeCounte (81.6) and J.R. Reed (80.9) continue to provide excellent play on the back end, while true freshman Tyson Campbell (79.3) provided the early big play with his fumble return for a touchdown before exiting with an injury. Campbell was replaced by redshirt freshman Eric Stokes (77.7), who played more snaps (78) than the previous three games combined and only allowed two receptions on six targets for 32 yards.

As the Bulldogs embark on this stretch of SEC opponents, look to see more play-action passes from offensive coordinator Jim Chaney and QB Jake Fromm. The Bulldogs have used play action on only 19.7% of Fromm’s attempts thus far, one of the fewest rates in the nation. As the need for big plays increases, look to see that number go up. Fromm is currently 8-of-14 for 220 yards and three touchdowns off play action (141.4 passer rating), with his 15.7 yards per attempt off play action third best in the FBS.