For the third-straight week, our College Pick of the Week (NC State (+17.5) versus Clemson) fell flat, leaving us at 3-5 (37.5%) on said picks through the season’s first eight weeks. Alas, we’re back to it, going to one of the service academies with our pick this week.

The line (Army (+2)) has moved since we recorded the video yesterday to +1, showing that, like roughly 65% of our picks this year, we are getting closing line value on our picks. Even then, we still think the wrong team is favored, as our number is more like Army (-2.5). As we do each week, our pick of the week will get the point/counterpoint analysis, and the rest of our picks printed below. 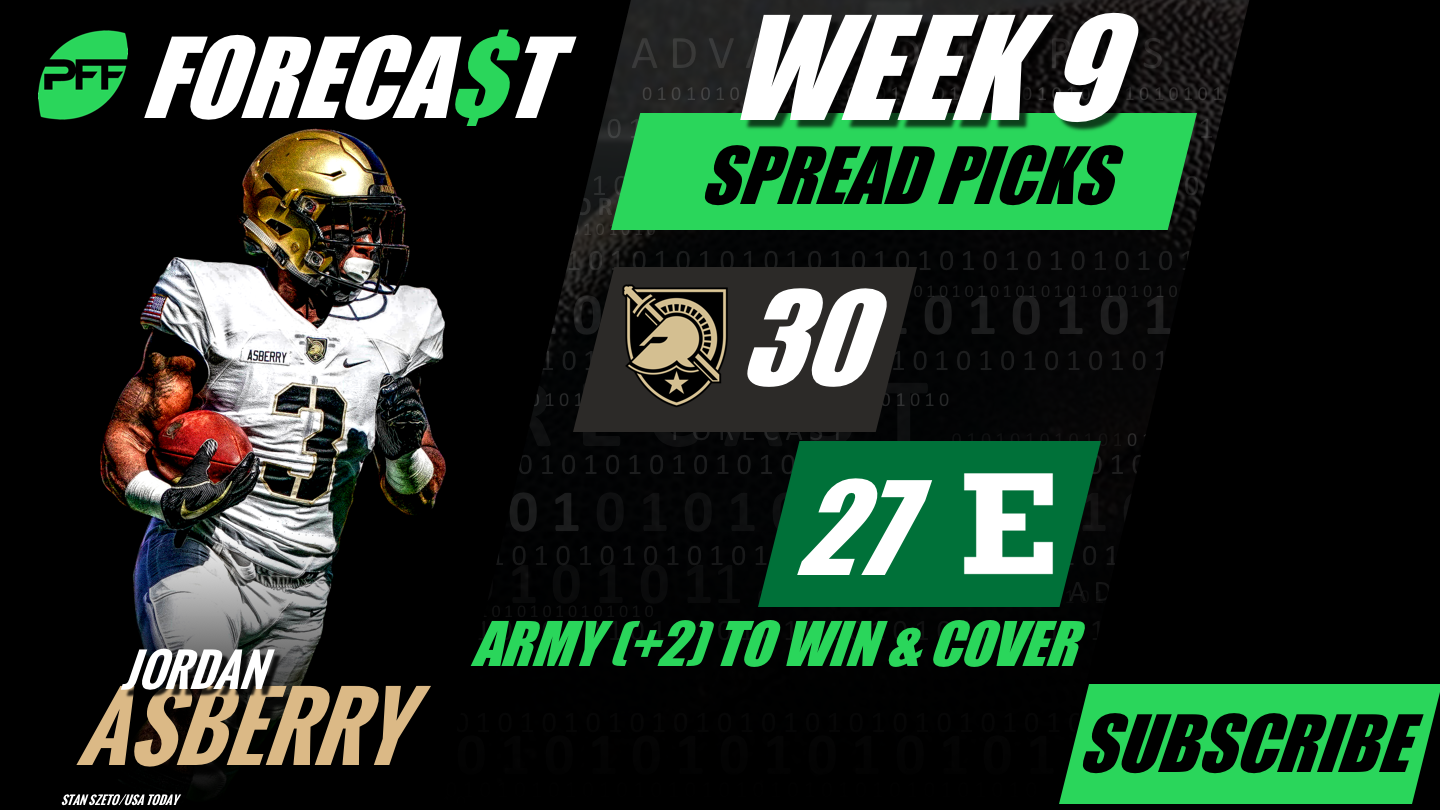 Point (Eric Eager): There’s no bigger proponent of the running game than me literally anyone else in the world than me. However, almost 45% of early-down runs against Eastern Michigan have been successful so far this year, meaning that their biggest weakness plays into Army’s strength, being the fourth-highest-graded run-blocking team in the league (all other run-related palpitations are to be sent to @PFF_George). On the other side of the ball, Army is able to compete with anyone due to a solid defensive unit, which missed just three tackles against 27 total stops against Miami (OH) in an overtime win a week ago. Elijah Riley has been a complete player in the backfield, with multiple pressures, pass breakups and plus coverage the last few weeks.

Counterpoint (Ben Brown): Eastern Michigan is coming off a quality win against Ball State where they completely dominated all facets of the game. Tyler Wiegers had one of his highest-graded passing games of 2018. Backup quarterback Mike Glass III also offers more upside than Wiegers and should see a healthy dose of reps if he is available coming back from injury. Combined in 2018, they have an EPA generated per early-down pass attempt of 0.11 with 47% of their attempts being successful from an EPA standpoint. Passing is always supreme, at home with the better passing game, the Eagles could easily snatch a victory away from Army. Completely random and unpredictable but the Eagles have also been fortunate to force 10 fumbles in the running game. If they get a lucky bounce on Saturday, it could turn into a long game of catch up for Army.