Week 7 was a rough week, as UTSA did not get us to the window against Louisiana Tech at home, and thus we sit at 3-4 (42.9%) on our college pick of the week, having lost three of our last four picks. Our picks, in general, continued to get line value on over 62% of picks in Week 7, so hopefully, Week 8 turns over well for us.

After a week off, we’re going to go back to the well with a team that we’ve liked against the spread before, with NC State as big underdogs against the Clemson Tigers.  As we do each week, our pick of the week will get the point/counterpoint analysis, and the rest of our picks printed below.

A reminder that you can follow us on Twitter at @BrownBenjamin22 and @PFF_Eric and listen to the PFF Forecast with Eric & George Chahrouri here. 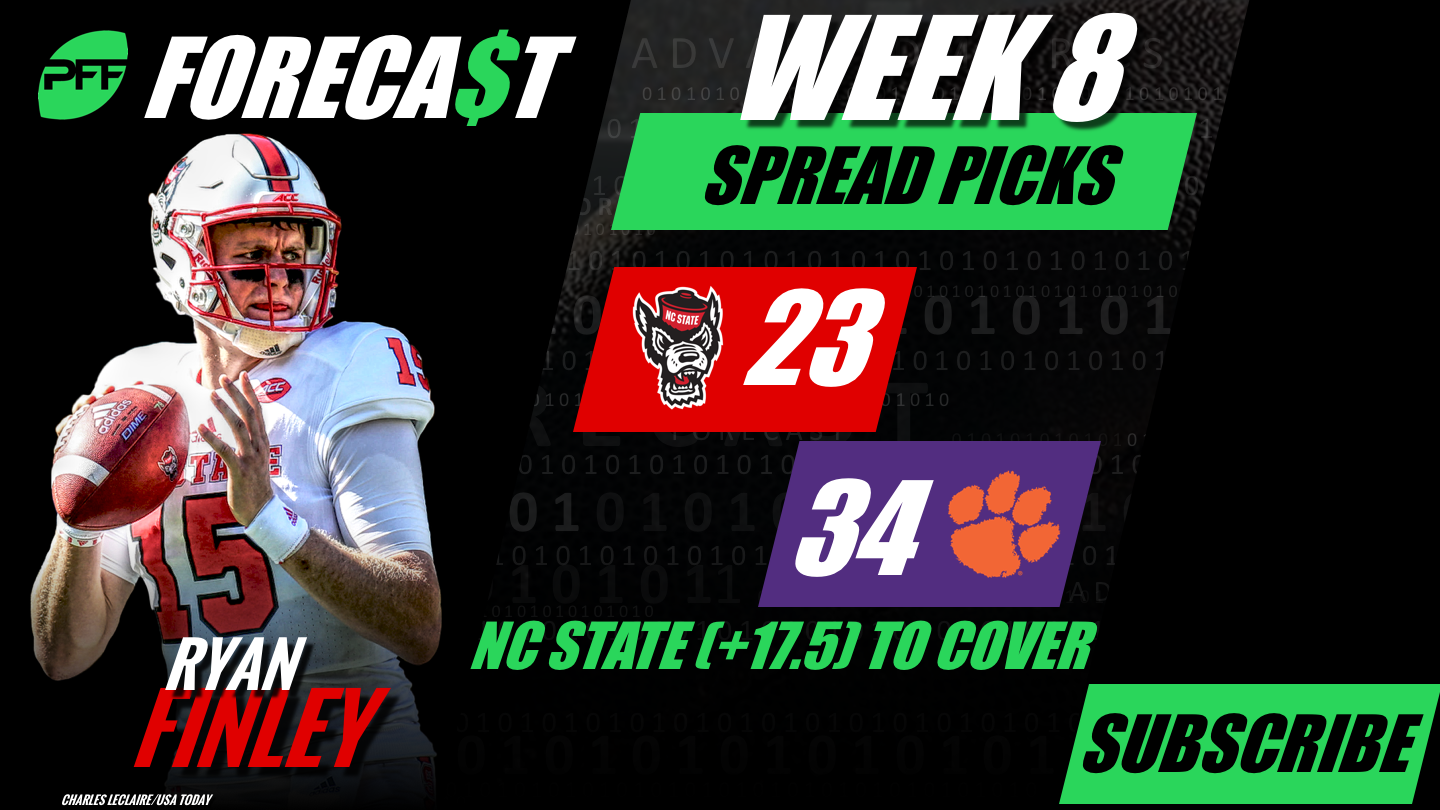 Point (Eric Eager): NC State has been the most efficient offense in the ACC, with an early-down success rate of 55.07% when throwing the ball (no one else in the conference is above 50).  Among all ACC quarterbacks with more than 100 dropbacks, Ryan Finley has been the highest-graded on a per-snap basis, with an impressive 40.3% of his passes earning a positive grade from us, and his team generating 0.42 expected points each time he drops back to throw. Clemson has been absolutely dominant against the run on early downs, allowing just a 21.51% success rate, but have not been as dominant against the pass (41.07%). Look for Finley to do his part, and while Trevor Lawrence has been ok (but with just a 1.8% big-time throw rate), you’re getting the better quarterback catching points here. Take the Wolfpack.

Counterpoint (Ben Brown): Clemson has been a team in flux for all of 2018, but appears to have hit their stride against Wake Forest before their off week. The Tigers passing offense has a neutral EPA on early-down attempts which has been masked by their run-play success that slides in close to 59%. NC State offers a formidable rush defense but has struggled at points in coverage. The question then becomes if NC State forces Lawrence to beat them, how well will he perform? Lawrence has looked the part when kept clean, posting a passer rating of 131.2. He has also looked timid at points and isn’t being asked to make many quality throws downfield evidenced by his low big-time throw percentage and even lower turnover-worthy throw percentage (0.9%). 17.5 seems like a stretch if NC State is as quality an opponent as they currently appear. Clemson will need a lucky bounce or early turnover to get the lead necessary to cover this spread.