Week 9 got us back home with a win, as Army (+2) beat Eastern Michigan straight up on the road in an impressive effort. We’re now 4-5 (44.4%) on our college picks of the week, and over 52.5% on our picks against the spread, which have gotten closing line value roughly 65% of the time. We haven’t done so hot on totals, despite getting closing line value roughly 57% of the time on those, so we’re going to limit our selection of those this week.

We continue our Pac 12 love this week with a late-night affair between Washington State and California. For the second time this year, we like the Cougars, and are laying a decent amount of points to do so.

As we do each week, our pick of the week will get the point/counterpoint analysis, and the rest of our picks printed below. A reminder that you can follow us on twitter at @BrownBenjamin22 and @PFF_Eric and listen to the PFF Forecast with Eric Eager and George Chahrouri here. 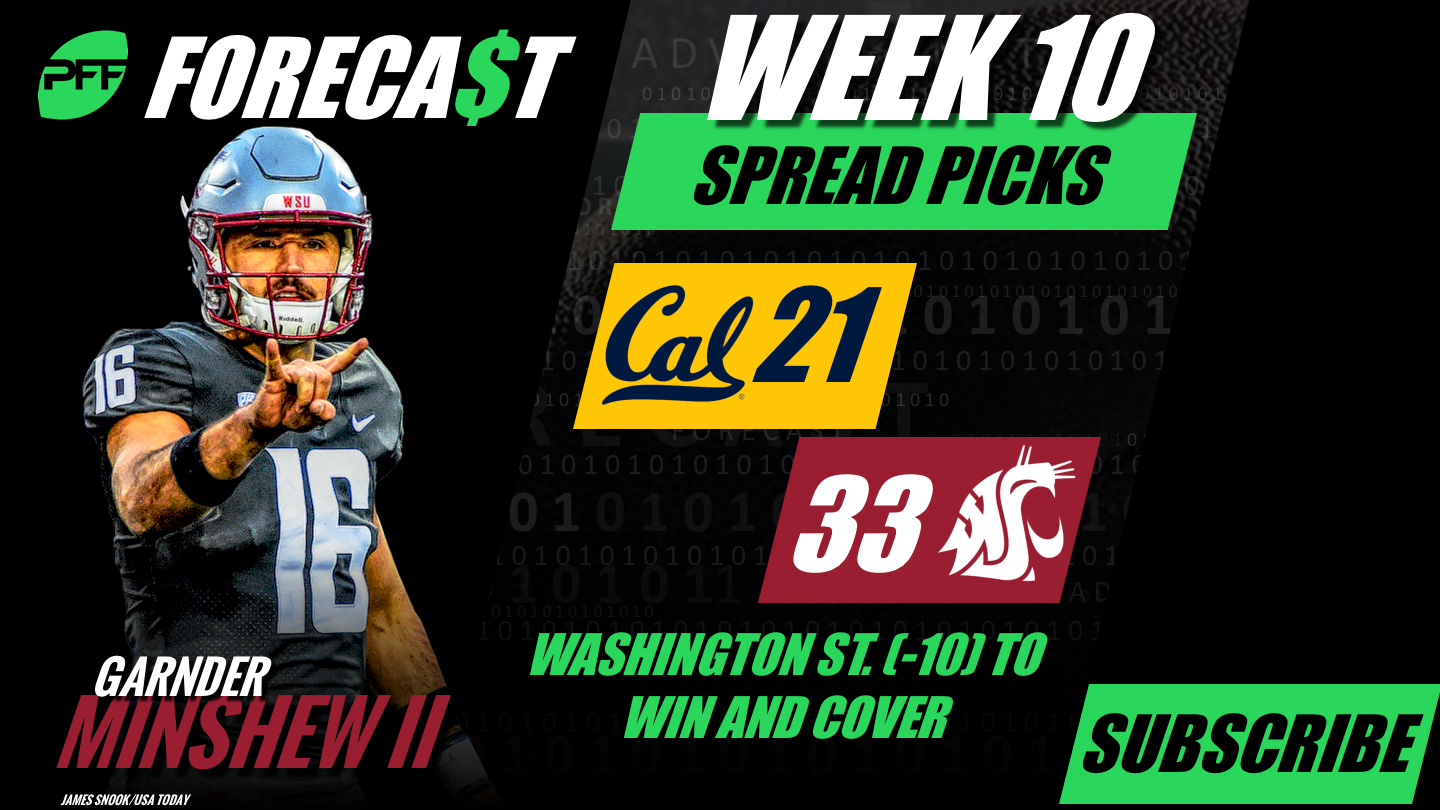 Point (Ben Brown): Washington State has ridden their prolific passing attack to one of the most surprising starts in college football this year. Gardner Minshew has played much better than expected and despite leading the FBS in passing dropbacks, he has still been able to generate an EPA per dropback of 0.28. Cal has played well in coverage but hasn’t exactly faced a daunting passing offense outside of their blowout loss to Oregon. Washington State is simply playing too well especially in areas that actually matter. At home, this should be an easy cover for Washington State as they continue to climb up the rankings.

Counterpoint (Eric Eager): While I think the fundamentals align with Washington State here, the number (-10) scares me a bit. Cal has struggled offensively but has been pretty good on the defensive side of the ball, allowing the third-fewest EPA per early-down passing play (-0.16) and have not been too shabby against the run, either (-0.15). If they can hold down Washington State’s offense, there might be some plays to be made against a Cougars defense that has allowed a positive EPA per early-down passing play so far this year. That said, I’m with Ben – I think a 12-10 win against a down Washington team will do more to relax a fraudulent Cal team than motivate them. Go Cougs.

Air Force at Army OVER 44

Georgia at Kentucky OVER 43.5

Northern Illinois at Akron OVER 37