Treash: Why Florida’s Kyle Trask is not an elite SEC quarterback

Florida Gators quarterback Kyle Trask has opened up his 2020 season with one of the most alluring box scores in the country.

In his first three games — against Ole Miss, South Carolina and Texas A&M —Trask completed 71.8% of his passes, threw for 996 yards (9.7 yards per attempt), tossed 14 touchdowns and had just one interception. Meanwhile, the Florida passing attack as a whole has generated 0.55 expected points added (EPA) per pass play — the third-best mark in the FBS. This all sparked significant support that the fifth-year senior is one of college football's elite signal-callers. From media outlets to fans, those conceptions about Trask were starting to become the public consensus.

We received backlash for placing Trask at No. 5 in our SEC quarterback rankings that published prior to Week 7 — behind Alabama’s Mac Jones, LSU’s Myles Brennan, Ole Miss’ Matt Corral and Arkansas’ Feleipe Franks (although Trask is up to No. 4 following a disastrous performance by Corral in Week 7).

Despite the captivating box score, Trask has produced in 2020, earning a 78.8 passing grade that ranks fifth in the conference and 17th in the FBS. Removing his 2020 debut against Ole Miss, which we now know has the worst defense in the Power Five and possibly in the entire FBS, Trask’s passing grade dips to 64.1 — 10th in the SEC.

That's quite the opposite of what the public would expect for a player stuffing the stat sheet.

Trask's situation is nearly identical to what happened last year. Following a season-ending injury to Feleipe Franks, Florida’s starting quarterback at the time, in Week 3 of the 2019 season, Trask — then a redshirt junior who hadn’t started a game since his early years in high school — took over and led the Gators' offense. He would go onto finish the year with a 66.8% completion rate, 2,941 yards (8.3 yards per attempt) and a touchdown-to-interception ratio of 25 to 7.

Trask received rave reviews as a result, but he was the 80th-ranked passer in the FBS among 131 qualifiers in our grading system. Consequently, he came in at No. 48 in our 2020 preseason rankings of all 130 FBS quarterbacks.

While Trask’s 2019 and 2020 seasons are similar in that his box score stats make him out to be better than he is, they each came in different ways. There are a few improved areas for Trask this year, such as making a few throws downfield and avoiding bad decisions. Last year, Trask had the fourth-worst big-time throw to turnover-worthy play differential in the FBS, at -13 (9 to 22). Through three games this season, Trask has nearly matched his big-time throw total from last year (eight) and is on pace to cut his turnover-worthy play rate in half.

He has also looked a little more comfortable when under duress; he isn’t a complete statue in the pocket like he was in 2019. For example, Trask has tried to extend a play outside the pocket on 21% of his pressured dropbacks this year — more than double his rate last year. He was once allergic to abandoning the pocket when under pressure, which would result in him taking a sack or forcing a bad throw.

We have still seen that some in 2020 but nowhere to the degree of what it was in 2019, and we are starting to see a little — and I emphasize a little — more playmaking from Trask. I should add that this is an area most first-year starters struggle in before making a leap in Year 2.

There are, however, still a lot of red flags within his game. Most of Trask’s 2020 production has stemmed from scheme, play calling and a slew of playmakers at his disposal.

On throws of 9 yards or fewer downfield this season, Florida’s receiving unit has averaged the most yards after the catch per reception (8.7) and have turned 28% of such catches into an explosive play of 15 or more yards — 10 percentage points higher than any other SEC team. And Trask has generated a 130.4 passer rating on these throws, which also leads the SEC.

Last year, Trask threw to a receiver with open separation (more than a couple of steps from the nearest coverage defender) on 41.1% of his passes. That rate has spiked to 55.5% in 2020. This does not mean his receivers are separating at a higher rate downfield, though. In fact, it’s quite the opposite.

Trask is throwing to an open receiver on throws of 10-plus yards in 2020 nearly 10% less often than he did in 2019. This goes to show that coach Dan Mullen has created a lot of short, open throws for Trask and is giving the receivers room to make plays after the catch. And this can also partly explain that vast improvement in turnover-worthy play rate — the scheme is gifting him open receivers.

Trask certainly isn't a flat-out bad quarterback. We are trying to say he is just not nearly as good as what the public, box score and Florida’s offensive efficiency are making him out to be.

Florida’s passing offense is one of the most efficient in all of college football in terms of EPA per pass play. In short, EPA puts yards gained on a play into context — using down, distance and field position — to give the best measure of per-play efficiency. Plays that generate positive EPA are successful plays for the offense.

But just because a pass play generates positive EPA doesn’t mean the quarterback made a great throw. By comparing our play-by-play grading to those successful plays, we can verify whether it was the quarterback or ecosystem around him that was largely responsible for the play.

This is where it really gets interesting with Kyle Trask. 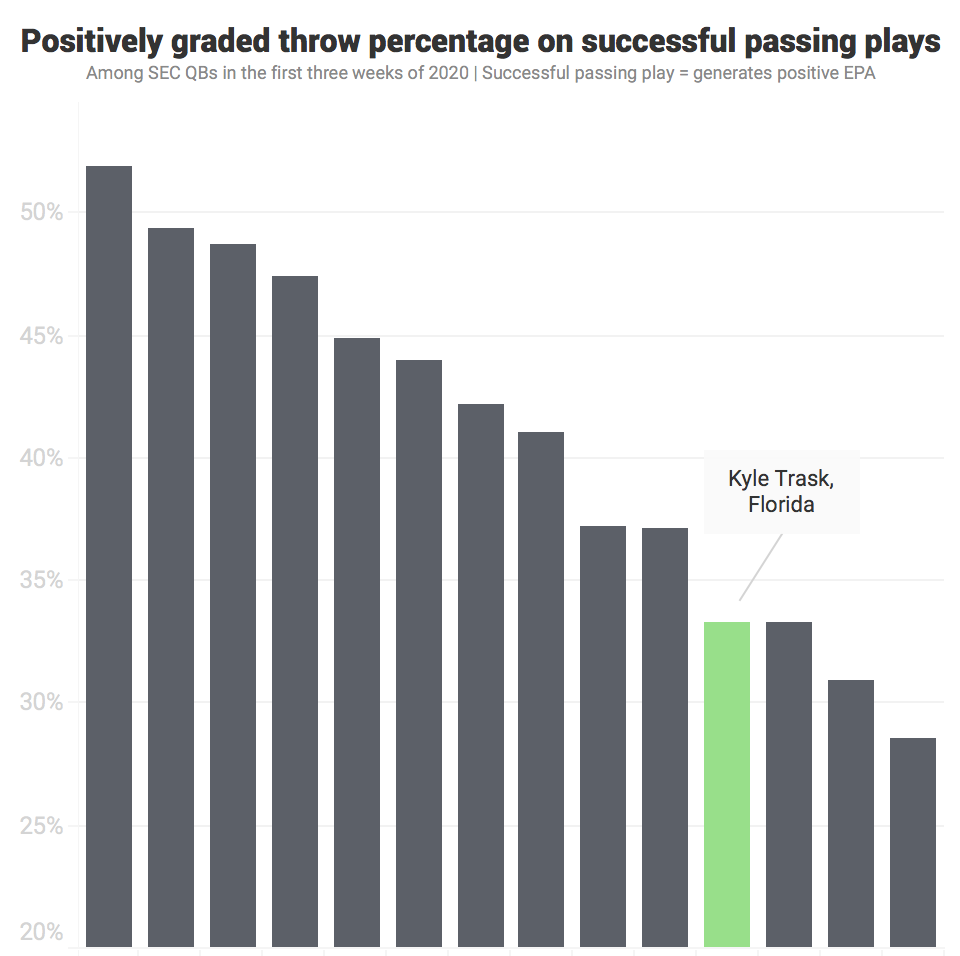 As you can see in the graph above, Trask is tied for 11th in the SEC by percentage of positive EPA pass plays in which he also earned a positively graded throw.

Now, I understand EPA is not widely adopted and more traditional football fans are not going to lean on this metric. So, let’s dive into another metric that’s more simplistic and more well-known: Explosive pass plays that result in a gain of 15 or more yards. Below is the same type of graph shown above, but instead of EPA, we are looking at an offense's rate of explosive pass plays in which the quarterback received a positively graded throw. 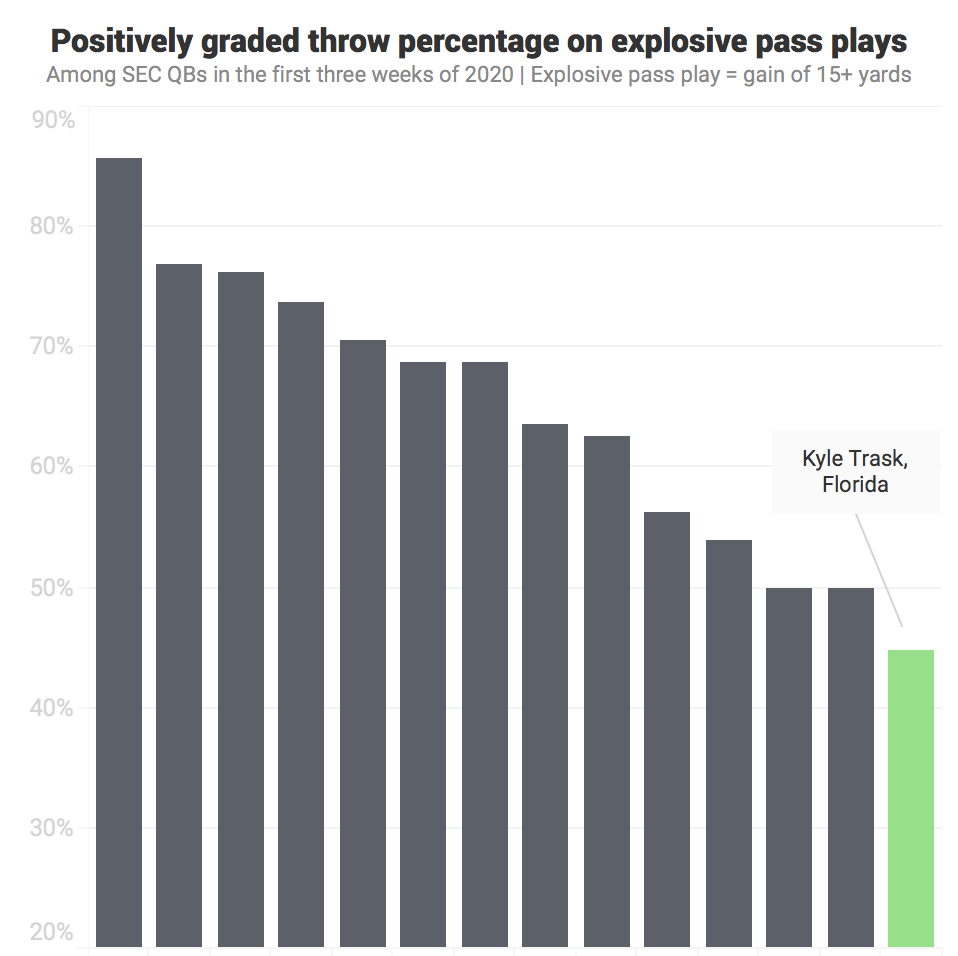 “Accuracy and decision-making are all baked into the play-by-play grading, with positive grades being earned on passes that lead to first downs and more. The system accounts for the timing and difficulty of the throw while also gauging the decision-making with respect to the quarterback’s progression on a given play. The better the throw, the higher the grade, and passes that earn a +1.0 or better are considered big-time throws. The key to remember is that the result of the play doesn’t change the quarterback's grade, so pinpoint downfield passes that are dropped will still earn the same grade despite showing up as 0-for-1 in the boxscore.”

There are many throws that fall into the “expected” category, which are neither positively graded nor negatively graded. Take this montage of successful plays by the Florida offense in 2020 for example:

"Kyle Trask has 996 passing yards and 14 touchdowns through three games and Florida has one of the best offenses in the country. How is he not your highest-graded QB?" pic.twitter.com/i3ssguHDre

These are several examples just this year of plays that generated positive EPA or resulted in an explosive gain of 15 or more yards where Trask did not receive a positively graded throw.

The Florida Gators' offense is, and will continue to be, one of the best in the SEC, but it’s time to start giving credit to those who deserve it more than Trask: Head coach Dan Mullen, offensive coordinator Brian Johnson and the slew of receiving weapons — such as Kadarius Toney, Kyle Pitts, Malik Davis and Trevon Grimes.