After a full slate of games on Saturday, we at PFF have dissected and graded every player on every snap of every game to bring you the most detailed and valid set of picks you can find anywhere.

The Week 9 Eckrich B1G Team of the Week powered by PFF saw some impressive performances and, of course, the strength of opponent also factored into the overall selections, as did the PFF player grades. 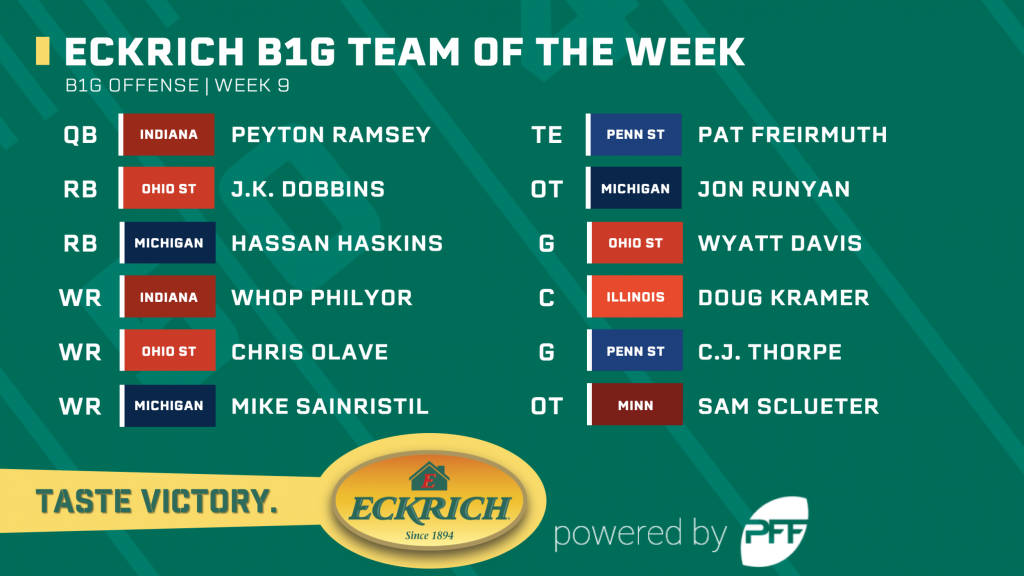 Ramsey completed a conference-high 27 passes on 40 attempts for 351 yards and two scores in Indiana’s 38-31 victory over Nebraska on Saturday. He was moving the chains all afternoon as 18 of his completions went for a first down, six more than the next closest Big Ten quarterback for the week. The Hoosier’ quarterback finished with an impressive 90.1 overall grade for the game.

Dobbins was electric in Ohio State’s dominant win versus Wisconsin on Saturday afternoon. He turned 20 carries into 163 yards and two scores. On the day, he finished with eight first downs and six runs of 10-plus yards, with 92 of his total rushing yards coming after contact. His 4.06 yards after contact per attempt ranked second-best in the conference in Week 9.

Haskins was a significant part of the Wolverines’ dismantling of Notre Dame on Saturday night. He led the way for the Michigan offense to the tune of 149 yards rushing on 20 attempts with six first downs, four runs of 10-plus yards and four forced missed tackles. Of Haskins’ 149 yards, 113 came after contact for a conference-high 5.65 yards after contact average for the week.

Philyor continues to put up monster numbers with a 14-catch, 178-yard day in Indiana’s victory over Nebraska. The Hoosier wideout moved the chains on eight different occasions, and his 19 targets were the most of any FBS receiver for the week.

The Buckeye receiver posted seven receptions on eight targets for 93 yards and two scores to help Ohio State run away versus Wisconsin on Saturday. All seven of Olave’s catches went for a first down, while his 154.7 passer rating when targeted ranked second-best among the B1G wide receivers with five or more targets.

Sainristil made the most of his four targets on Saturday night in the Big House, with three receptions for 73 yards and a score. All three of his catches moved the chains, and among receivers with three or more targets for the week, Sainristil’s 24.3 yards per reception average ranked second in the B1G.

Freiermuth put on a show for the Nittany Lions in their 28-7 victory over Michigan State. He caught all five of his targets for 60 yards while finding the end zone on three different occasions. Four of the tight end’s targets went for a first down, and 23 yards of his total came after contact for Penn State.

Runyan generated a conference-best 80.7 overall grade among offensive tackles for the weekend. He finished the game having allowed only one quarterback hurry on 20 pass-block snaps, and he helped pave the way for the impressive Michigan running game vs. Notre Dame.

Davis earned the top conference grade among guards this weekend at 76.0. While he did allow two pressures in pass protection, Davis made his presence felt as a run blocker. He finished with a 78.3 run-block grade against Wisconsin, almost 10 points better than the next closest guard.

Kramer helped control the line of scrimmage all afternoon for the Illini, finishing as the top-graded center for the week at 78.1. He paced the Illini offensive line as the team rushed for 242 yards on 53 carries against Purdue.

Thorpe was dominant at his right guard position in Penn State’s 28-7 win over Michigan State. He ranked as the second-best guard in overall grade and run-block grade, all while not allowing a single pressure on 18 snaps in pass protection.

The Minnesota left tackle had a clean afternoon without allowing a single quarterback pressure on 26 pass-block snaps. Schlueter was also a mauler in the running game during the Gophers’ 52-10 victory over Maryland, earning a 72.6 run-block grade. 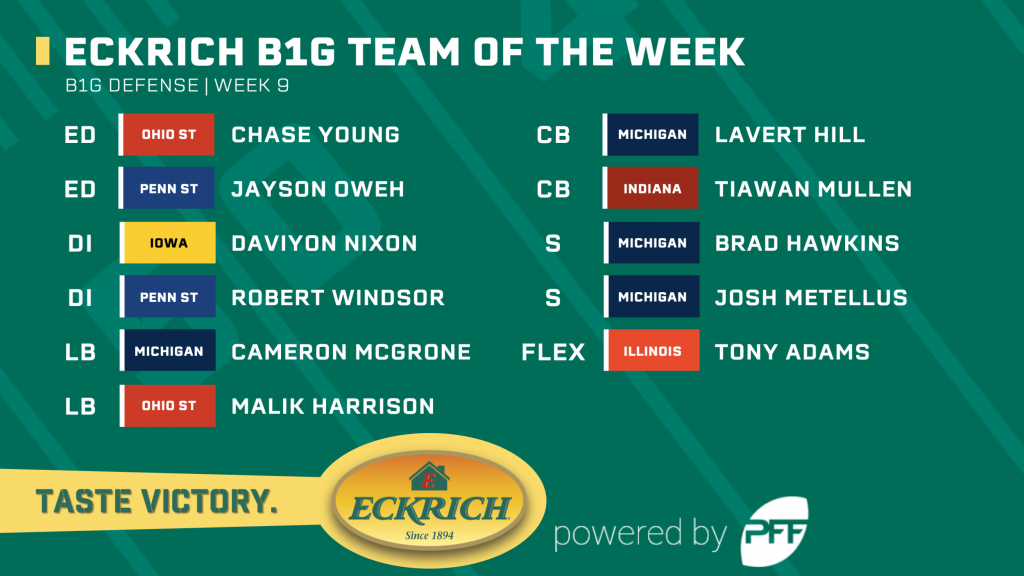 A Heisman-worthy edge defender, Chase Young put together a monster afternoon versus the Badgers in Ohio State’s 38-7 win. He put the world on notice yet again with a remarkable 96.5 overall grade for the game. Among all edge defenders in the PFF-era with 25-plus snaps in a game, Young's performance was the best game grade PFF has ever given out. In total, he finished with seven total pressures (four sacks), six defensive stops, and two forced fumbles.

Oweh was not far behind Young in terms of PFF grading, with an overall mark of 95.2 on 26 snaps. He tallied five pressures across 19 pass-rush snaps, including two sacks, and he registered two defensive stops and two forced fumbles for the Nittany Lions.

The Iowa interior defender was a menace all afternoon in the team’s shutout victory over Northwestern. In total, Nixon generated four pressures on the quarterback (two sacks) and five defensive stops across 34 snaps.

Windsor flat out got it done as a pass-rusher from his interior defender position on Saturday in Penn State’s road victory over Michigan State. He finished with a conference-high 76.6 pass-rush grade over his 34 snaps rushing the quarterback. Of those snaps, four resulted in pressure, including one quarterback hit as Penn State improved to 8-0 on the season.

McGrone was a standout in all of college football at the linebacker position this weekend for Michigan. He ranked as the Big Ten’s top player at the position with an 83.8 overall grade on 60 snaps versus Notre Dame. In total, he finished with three pressures on the quarterback, eight defensive stops, and he allowed only one catch for four yards in coverage. Remarkably, McGrone’s 92.0 grade in run defense ranked first among all FBS linebackers for the weekend.

Harrison was all over the field for the Buckeyes on Saturday afternoon and earned the second-highest grade among linebackers in the conference. He tallied four tackles and two defensive stops in the Ohio State route of Wisconsin. Harrison’s 79.0 overall game grade ranks as his highest of the season thus far.

Hill was part of a Michigan secondary that was in full shutdown mode versus Notre Dame on Saturday night. Among cornerbacks with 25-plus snaps in the conference, Hill posted the high grade of the weekend at 78.0. He was only tested twice in coverage, recording two pass breakups in those instances.

Mullen helped Indiana move to 6-2 this season with shutdown play against the Cornhuskers. The cornerback posted a top-three grade at the position for the weekend, while being targeted once in coverage which resulted in a forced incompletion. On the season, Mullen has only allowed three catches on 15 targets for a lowly 13 yards and five pass breakups while in coverage.

The duo of Hawkins and Metellus at safety helped Michigan lockdown a talented Notre Dame offensive attack Saturday night. Hawkins generated the second-highest overall grade in the conference at the position for the weekend, allowing only one catch for four yards during his 39 snaps in coverage.

Metellus ranked as the third-highest graded safety in the B1G for the weekend, just behind his fellow teammate Brad Hawkins. He broke up the only target that came his way in coverage against the Fighting Irish, while also recording two defensive stops in the rained-soaked night at the Big House.

Adams posted the top grade among safeties in the conference with a mark of 79.1 in the Illini’s 24-6 victory over Purdue. The safety allowed only two receptions on four targets in coverage with one interception. Adams also didn’t miss a tackle all game on his four tackle attempts. The arrow is pointing up for Adams, as this was his first game of the season graded at 70.0 or higher for the Illini.