The Week 7 Eckrich Big-12 Team of the Week powered by PFF saw some impressive performances and, of course, the strength of opponent also factored into the overall selections as did the PFF player grades. 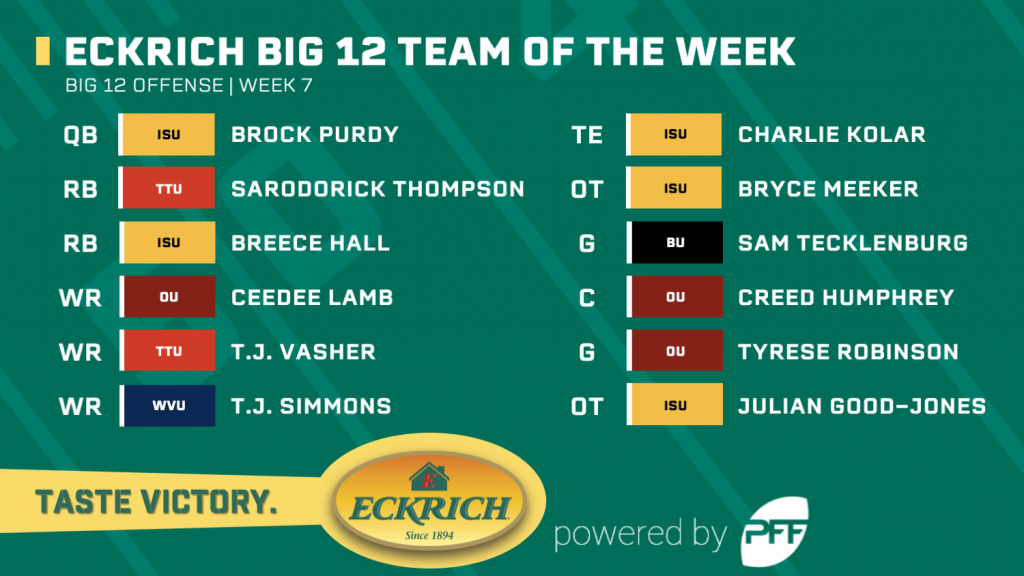 Purdy led all Big-12 quarterbacks in overall grade in Week 7 (79.0), helping Iowa State dismantle West Virginia, 38-14. While it was running back Breece Hall who stole the show, Purdy himself was strong despite a shaky box score. He didn't have a single turnover-worthy play and notched his highest rate of air yards (62%) in a game this season.

Among running backs with at least 15 attempts in Week 7, Thompson ranked tied for fourth in missed tackles forced per attempt (.39). He caused defenders to whiff a whopping 11 times against Baylor — a season-high.

As solid as Brock Purdy was against West Virginia, this was Hall's stage. And he shined on it, taking 26 carries en route to 132 yards and three touchdowns. Hall also broke off five runs of 10-plus yards, which tied for fifth among running backs in Week 7.

It's hard to say anything other than, “It's CeeDee Lamb's world, and we're just living in it.” Lamb concluded Week 7 as PFF's highest-graded wideout (90.2) after hauling in 10-of-12 targets for 171 yards and three touchdowns. He also added seven missed tackles forced — three more than the next best wide receiver.

As is often the case, looking at a box score rarely provides a complete picture. And Vasher's effort on Saturday fits that bill — three of his eight targets were considered “contested,” and he hauled in each of them. While Vasher finished with just 46 receiving yards and a touchdown, his tough-catch prowess was on full display.

Simmons generated a 118.8 passer rating when targeted on Saturday, the second straight week he had a mark over 100.0. And with all five of his receptions against Iowa State going for first downs, Simmons made his presence felt in Week 7.

On 36 pass-blocking snaps, Meeker surrendered just one pressure — albeit, a sack — which earned him an impressive 80.1 pass-blocking grade. After a Week 5 disaster that saw Meeker allow seven pressures, he has allowed just one in the past two games.

Not much has gotten by Tecklenburg this season, and Week 7 saw him excel once more. He allowed just his second pressure of the season, but it was just a hurry as he achieved an 80.0-plus pass-blocking grade for the fourth time in six games.

For the third straight game, Humphrey failed to allow a pass-rusher to get by him. On 34 pass-blocking snaps, he was flawless. And in the run game, Humphrey helped pave the way as Kennedy Brooks racked up 105 yards on the ground.

Oklahoma's offensive line held its ground against Texas, and Robinson joins Creed Humphrey on the team of the week as a result. He allowed just one quarterback pressure and was one of four Sooners on the front-five to earn a pass-blocking grade of 70.0 or higher.

Good-Jones not only protected quarterback with relative ease on Saturday — he also helped propel running back Breece Hall to a big day on the ground. He allowed a quarterback hit on 36 pass-blocking snaps and was a catalyst on 42 run-blocking snaps. 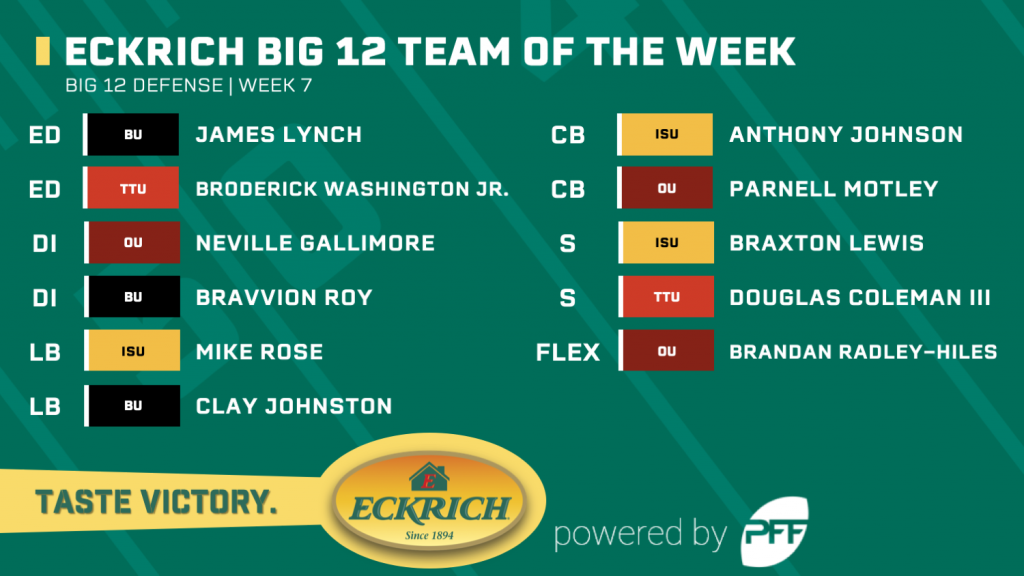 A week after notching four sacks against Kansas State and finding himself on the Week 6 Big-12 Team of the Week, Lynch put together another dominant effort in Week 7 to the tune of three sacks and six total quarterback pressures. He also leads the country in total pressures this season.

Washington has occasionally disappeared in the pass-rushing game this season, but his Week 7 was far from that. He tallied six quarterback pressures and chipped in three stops in a tight loss to Baylor.

Gallimore's 80.8 pass-rushing grade ranked eighth among all interior defenders in Week 7 as he notched six quarterback pressures — tied for third at the position.

The Baylor defense knows how to get to the quarterback. Roy is no exception, as he exploded for seven quarterback pressures against Texas Tech and has now already topped his pressure total from 2018.

Rose put together his most complete performance of the season in Week 7, grabbing a sack and racking up five stops. He also didn't miss a tackle for the first time since Week 3.

In six of his seven games this season, Johnson has allowed less than 20 yards to be gained into his coverage. Week 7 was another instance, as the lone target he saw on 29 coverage snaps went for a single yard.

Motley rebounded from a poor showing in Week 6, allowing just one completion on three targets in Oklahoma's win over Texas. He also added a pass breakup on 52 coverage snaps.

Not only does Lewis find himself atop the Big 12 with his performance Saturday — he sits No. 1 among all FBS safeties in Week 7 with his 90.0 overall grade. That came on the back of an interception, a pass breakup, a stop and four tackles.

Coleman features on this list for the second time in as many weeks, and that's what happens when a player is flying all over the field. Coleman notched seven tackles and added an interception while staying stout in coverage.

Despite seeing a season-high 77 snaps, Radley-Hiles went without a target into his coverage in Week 7.  And with just nine targets this season, he ranks eighth among all FBS cornerbacks in snaps per target faced (16.9).