Jalen Hurts on pace for a career year in Oklahoma’s offense, has improved in all facets since his time at Alabama

To truly understand how far Hurts has come as a quarterback, one must look back at the beginning of his illustrious college football career. As a true freshman, Hurts competed for the starting quarterback job at Alabama, and although now-USF quarterback Blake Barnett started the first game, it was Hurts at the helm of the offense the very next week — the Channelview High School product was the first true freshman to start at quarterback for the Crimson Tide in over 32 years.

Hurts was efficient in his first year, recording the nation’s ninth-best adjusted completion percentage (76.9%) and the third-highest overall grade (71.4) among true freshmen quarterbacks. He showed poise from a clean pocket—the most stable situation in regard to evaluating quarterback performance—completing 214-of-300 clean-pocket attempts for 2,483 yards, 19 touchdowns and just five interceptions, generating a clean-pocket passer rating of 110.2 that ranked 28th among 147 qualifying quarterbacks that year.  He would go on to lead his team to an undefeated regular season and a national championship bout against the Clemson Tigers —a championship bout they would eventually lose—but despite the disappointing end to the year, ‘Bama had plenty to look forward to thanks to their up-and-coming quarterback.

In Hurts’ sophomore season, he improved his overall grade from 71.4 to 82.2 even though he saw his passing attempts fall from 384 as a true freshman to 256 as a sophomore. Despite the offense revolving less around him, Hurts was still able to lead the Crimson Tide to back-to-back national championship games, this time knocking off Clemson in the SEC Championship. In the national championship, Hurts put up just three completions on eight attempts for 21 yards and a PFF passing grade of only 43.4 before being pulled in favor of true freshman Tua Tagovailoa, who would eventually carry Alabama to an overtime 26-23 victory over the Georgia Bulldogs, effectively giving Jalen Hurts his first championship ring and his first glimpse of being a backup quarterback at the college level.

Hurts elected to stay and challenge Tagovialoa for the starting quarterback job in 2018, a position battle he would ultimately lose before the start of the season. Instead of joining the transfer portal, the former starter decided to remain on the team and watch as Tagovialoa put forth a season for ages; a season which he finished with the nation's second-best clean-pocket passer rating (141.6), the fourth-best passer rating under pressure (110.0) and the fourth-highest PFF passing grade (90.7). Tagovialoa guided Alabama to yet another undefeated season and to their third straight national championship game, but the Crimson Tide would collapse against the Clemson Tigers once again, this time in a dominating fashion, 44-16.

At the conclusion of the 2018 season, Hurts believed it was time to take his talents elsewhere in order to increase his draft stock and to further develop his football skills, and after watching both Baker Mayfield and Kyler Murray win Heisman trophies and get drafted first overall (both finished with the highest overall and passing grades in the nation), he chose to join the Oklahoma Sooners for his final season as a collegiate athlete.

Coming into the season, Hurts, and his 914 career dropbacks and his 82.7 career passing grade, didn't even make the cut on our preseason big board. But now, just one year removed from being replaced by Tagovailoa as the starting quarterback at Alabama, Jalen Hurts has pieced together six stellar weeks of football under head coach Lincoln Riley. 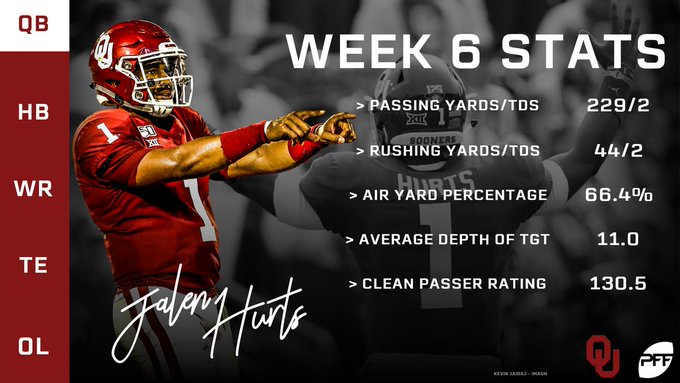 Hurts currently holds the second-highest overall grade among quarterbacks this year, just behind Georgia's Jake Fromm, and his rushing grade is third-best among quarterbacks with a minimum of 30 attempts, highlighting his athletic ability on both scrambles and designed runs. His average of 9.7 yards per carry and his first-down/touchdown rate of 54%  are not only the best of his collegiate career, but they also lead all quarterbacks through six full weeks of college football.

His dominance in the running game is prominent, but his poise and command in Oklahoma’s passing attack have particularly stood out. He currently owns the fourth-highest passing grade in the nation, at 91.4, and he's been simply phenomenal from a clean pocket, completing 64 of his 77 clean-pocket attempts this far, racking up 1,168 passing yards and 10 touchdowns (and just two interceptions) in the process. Through six weeks, Hurts' 92.2 clean-pocket passing grade ranks fourth among 116 quarterbacks who've logged at least 75 clean-pocket dropbacks, while his 15.2 yards per clean-pocket attempt and his 147.5 clean-pocket passer rating rank first and third among that same group of players, respectively.

Riley has seemingly tapped into a skill set that Hurts was not able to showcase previously at Alabama, as the new Oklahoma star also has the fifth-most post deep passing yards (533) among signal-callers this far. He is also averaging 23.1 yards per attempt on such throws, the best mark among quarterbacks by a country mile. With his cannon of an arm being liberated, Hurts boasts the third-best past-the-sticks percentage (percentage of passes thrown past first down marker), the nation’s best overall yards-per-attempt average (14.0) and the seventh-highest average depth of target (12.1). His play has not only fascinated his coaches, teammates and fans, but it has also impressed PFF’s Cam Mellor, who stated:

“He’s firing on all cylinders, and a big-time matchup between the Sooners and Texas Longhorns is likely the only thing standing between Hurts and an invitation to New York for the Heisman Trophy ceremony.”

Hurts will enter the Red River Showdown with career-high marks in clean-pocket passing grade, clean-pocket passer rating, passer rating under pressure (134.8, fifth in the nation) and yards per attempt (14.0, first). Another strong performance this afternoon will likely put him even further into the thick of the Heisman discussion, but perhaps more importantly, it will give him the chance to exit the college game just as he entered; a chance to write the final chapter of a career that, for all the twists and turns, has been one of the most enthralling of recent memory.