College Football: Five programs on the rise ahead of the 2020 college football season

There is not a single program in college football that has not experienced a string of “dark years” in which they performed below expectations. Granted, some dark years are darker and go on for far longer than others, but every school has experienced this, even the Alabamas of the world (though it’s been a while for the Crimson Tide).

However, the longer or darker the period, the sweeter the rise out of it. Almost every year, we see a program bounce back to winning ways after falling short so often in seasons past. So, let’s take a look at the positive and dive into the five teams on the rise in college football.

North Carolina has cracked the top 10 of the AP Top 25 just once since Mack Brown’s first stint with the Tar Heels ended in 1997 (2015). In an attempt to turn the program’s fortunes around, Brown made a coaching comeback to coach UNC in 2019. Still, it was never going to be easy given that the Tar Heels were coming off two very poor seasons that saw them finish with a 5-18 record over that period along with a 108th-place finish in the FBS in terms of expected points added per play.

So, it seemed unlikely that Brown would go on to lead UNC to immediate success, but he did just that, as the Tar Heels finished with a 7-6 record and fielded the eighth-most-improved offense in the entire FBS. And a lot of that had to do with the play of true freshman quarterback Sam Howell, whom Brown convinced to come to his squad.

Howell had one of the best true freshman seasons of the PFF College era (2014 – present). And while he could certainly improve his decision-making and poise under pressure, he showed that he could do some serious damage downfield with his arm. Howell earned the second-highest-grade among quarterbacks in college football last year when throwing 20-plus yards downfield from a clean pocket, and he threw 15 touchdowns of 30-plus air yards over the course of the season — five more than any other quarterback in college football.

Howell recently came in at No. 4 on the list of college football's best returning quarterbacks ahead of 2020. He also has one of college football’s top wide receiver duos to throw to in Dazz Newsome and Dyami Brown. On the defensive side of the ball, the secret superstar is cornerback Storm Duck. Duck, a true freshman a season ago, earned an 81.3 coverage grade that sat in the 92nd percentile among FBS cornerbacks in 2019.

Not only is Mack Brown set to field an impressive squad for the 2020 season, but he is also very much succeeding on the recruiting front. The Tar Heels can claim the 19th-best recruiting class of 2020 and currently rank fifth for 2021 according to 247Sports. There arguably isn’t a bigger program on the rise than the North Carolina Tar Heels.

This unfortunate streak could soon be coming to an end, however, as head coach P.J. Fleck has helped this Minnesota team improve by leaps and bounds offensively since his arrival in 2017.

It will ll be difficult — but not impossible — for them to match that 11-2 record in 2020. Yes, losing top-tier players like wide receiver Tyler Johnson and safety Antoine Winfield Jr. certainly hurts, but they are still set to return one of the best quarterback-wide receiver duos in college football in Tanner Morgan and Rashod Bateman.

Morgan had one of the most significant year-to-year improvements we saw at the position from 2018 to 2019 — he raised his PFF passing grade rank from 104th to eighth. One of the best aspects of his game last year was his play under pressure, as he ranked second to only Joe Burrow in pressured passing grade and earned top-10 marks in both negatively graded and positively graded play rate.

As for Bateman, he’s a top-three wide receiver in college football. His route-running ability is top-notch; like former teammate Tyler Johnson, his route running sets him up to get open and to come down with a big play at any moment. He produced a gain of 15-plus yards on nearly 38% of his total targets a season ago, the third-highest rate in college football. He can also create after the catch, as he produced the fourth-most broken tackles among Power 5 returners last year.

The stock continues to trend up for the Golden Gophers.

Before 2019, Indiana hadn’t been ranked in the top 25 since 1994. They had a winning season just once in that same span.

Last year that all changed, as the Hoosiers went 8-5, cracked the AP Top 25 and barely lost the Gator Bowl to the Tennessee Volunteers. And when you consider that they’re set to return most of their key members from that successful year, along with a healthy Michael Penix Jr., the Hoosiers have the potential to cause chaos in a Big 10 East that features three of the top 11 teams in college football.

Head coach Tom Allen has helped make this Hoosiers team a sneaky tough one to face as of late. This past year, Indiana had the 11th-most-improved offense and the 12th-most-improved defense among Power 5 teams in regard to expected points added per play. Their passing attack, in particular, has become one of the best in the Big 10 and one of the 25 best in the entire FBS. 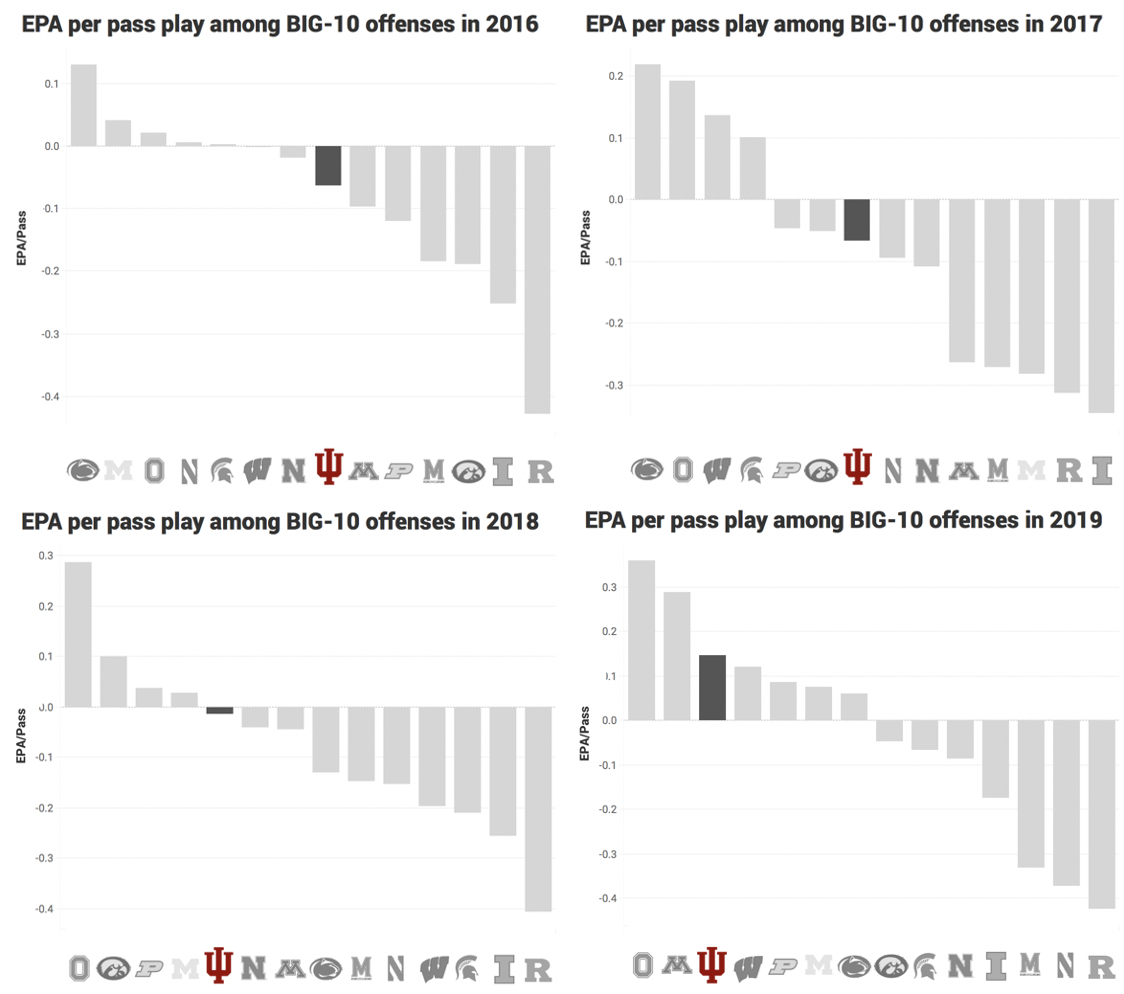 The play of Michael Penix Jr. and Peyton Ramsey last year was instrumental to Indiana’s success. Though he was limited to only six games, Penix looked like one of the top quarterbacks in college football when he was on the field: He showed accuracy, decision-making, pocket presence, arm strength and mobility — everything you’d want to see in a starting quarterback. He finished the year with an 83.5 passing grade that would have ranked 18th in the FBS. With a clean bill of health, Penix is a breakout waiting to happen.

Indiana’s coverage unit was also notably better in 2019 than it was in 2018. In fact, they were the sixth-most-improved Power 5 team in coverage this past year.

The Hoosiers have a plethora of underrated talent in the secondary, with Tiawan Mullen leading the charge. Mullen had one of the best seasons by any true freshman last year. He produced a PFF grade that ranked ninth among all true freshman cornerbacks since 2014, and his 30% forced incompletion rate was the second-highest mark in the entire FBS.

However, Mullen isn’t the only young Hoosier to watch in the secondary in 2020. Slot corner Jamar Johnson also thrived in a limited role by allowing only a 31.7 passer rating in coverage, and backup outside corner Reese Taylor allowed only six catches from his 15 targets across 147 coverage snaps.

The future is bright for Indiana. 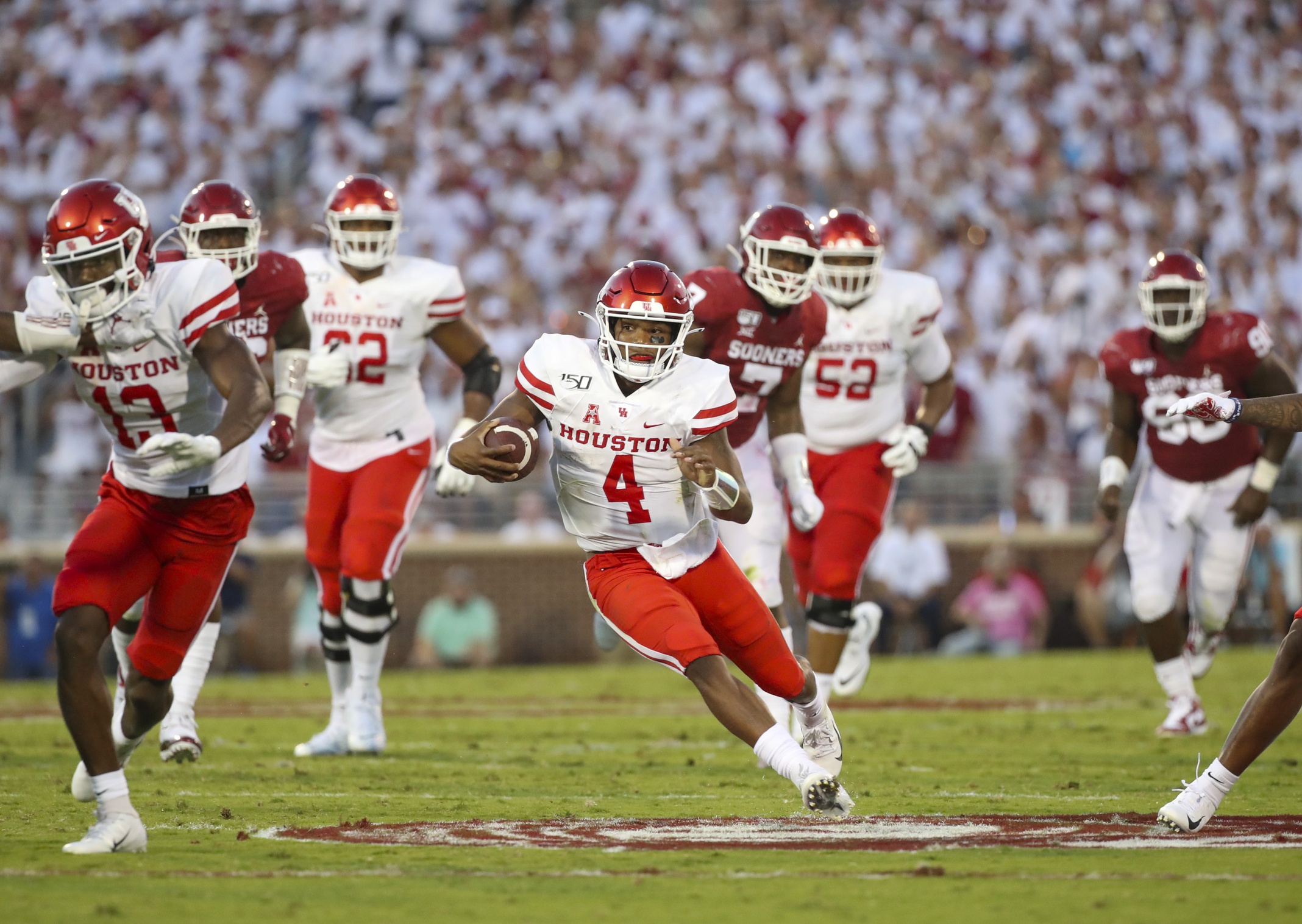 It’s no secret that 2019 was a disappointment for the Miami Hurricanes. They finished the year with a record of 6-7 and lost their last three games of the year to Florida International, Duke and Louisiana Tech.

The Miami defense did its part, as it ranked 22nd in the FBS in EPA per play allowed. The offense, on the other hand, struggled to pull its weight, ranking 88th in EPA per play on offense, slightly better than the 2018 campaign that saw the unit rank 105th.

So, how are they on the rise? Well, they landed a couple of gems via the transfer portal that should most certainly provide a much-needed boost.

Firstly, Miami hit the lottery by landing D’Eriq King, one of the most promising transfer players on the market. While many have succumbed to recency bias when it comes to King — he decided to redshirt after four starts in 2019 and produced a passing grade of 59.9 — we must not forget that he was the second-highest-graded quarterback of the 2018 season behind only Kyler Murray.

King is one of the best dual-threat quarterbacks in college football, and he proved that in 2018 by posting top-10 marks in both passing grade and rushing grade. If new offensive coordinator Rhett Lashlee can cater to King’s strengths, we could see an incredible comeback season from the former Houston signal-caller.

Miami also hit the lottery a second time by securing one of the best non-quarterback transfers in edge rusher Quincy Roche from Temple. Roche is coming off one of the best seasons we have seen at the position and was second to only Chase Young as the most valuable edge rusher of the 2019 season. Roche produced a 93.3 pass-rush grade this past year and is set to form one of the best edge duos in the nation when he teams up with Gregory Rousseau.

Even though their former starting quarterback, Justin Herbert, was recently selected No. 6 overall in the 2020 NFL Draft, the Oregon Ducks are primed for success in 2020 and beyond.

Tyler Shough, who has thrown only 15 passes in his college career, looks to be the next man up and will try and live up to his four-star status as a recruit. Shough will have Penei Sewell — one of the best players in college football regardless of position — blocking for him at left tackle, but the real reason Oregon has the chance to be even better in 2020 lies with its experienced and talented defense.

Put simply, the Oregon secondary is the best in the country — in terms of PFF’s wins above average (WAA) metric, no college team since 2014 has ever returned more talent to its secondary.

Jevon Holland is the top player in the Ducks’ secondary. Holland has incredible ball skills, and he used those skills to earn the highest coverage grade in the slot since 2018. And on the outside, the Ducks have Thomas Graham Jr. and Deommodore Lenoir, who combined to allow the 12th-lowest EPA per pass on targets a season ago.

Perhaps the most intriguing, though, is Mykael Wright. While Wright was only on the field for 305 snaps last season, he was still one of the 10 most valuable cornerbacks in college football. He allowed a 34.8% catch rate on his targets in coverage a season ago.

TCU arguably has the best safety duo in the country, but no school has more depth at that position than the Oregon Ducks, who have Brady Breeze, Nick Pickett, Verone McKinely III and JUCO transfer Bennett Williams. Breeze shined down the stretch for the Ducks and was actually their highest-graded defender (84.7). Pickett, on the other hand, is looking to build off a year in which he didn’t allow a single explosive play.

And, of course, we can’t forget about Kayvon Thibodeaux, who was the Pac 12’s second-highest-graded pass-rusher as a true freshman and is one of the top returning edge rushers in the country. Oregon also has the top two inside linebacker recruits of the 2020 class in Justin Flowe and Noah Sewell.

If Shough ends up the player many peg him to be and the defense plays up to its high potential, Oregon could reclaim their elite status once again.