The first full slate of college football is finally here. Week 1 of the football season brings an assortment of games across three main slates. Thursday kicks off with six games, headlined by the Clemson Tigers as five-touchdown favorites against Georgia Tech. Three of the six games have a spread over 25 points, alongside two games within a field goal spread and preseason media darling Utah opening as a six-point favorite on the road. Showcasing two Big Ten teams in the Top 25, Friday offers eight games with seven around a two-touchdown spread. Saturday brings what we all have been waiting for, 27 games highlighted by our PFF Game of the Week where Oregon travels to Auburn.

With so much action coming, we wanted to give a look at the new PFF NCAA Greenline product, which offers projections when wagering against game market spreads, totals and money lines. These models rely heavily on our PFFELO rating system for the NCAA, along with game or spot information like where the game is played, how far a team has to travel, among other variables. We also fold in opponent-adjusted PFF grades into our machine-learning algorithm to factor in roster changes and possible asymmetric mismatches that can occur through the course of a game.

Let’s take a look at some of our favorite edges according to PFF Greenline compared to consensus betting markets. 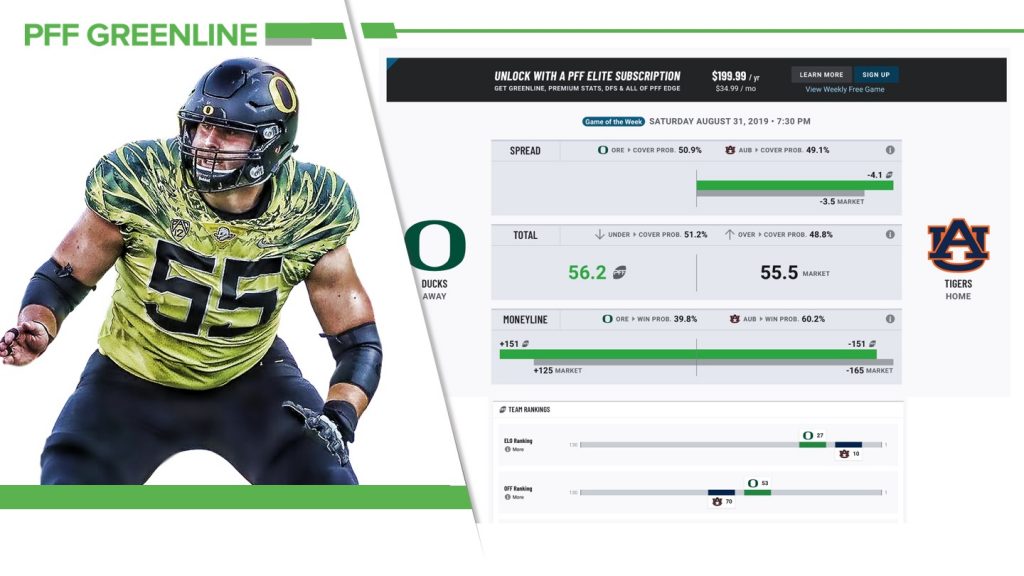 GAME OF THE WEEK

The marquee matchup in Week 1 pits one of the best defenses in the country against one of the best signal-callers in Justin Herbert. This game is filled with intrigue from a betting angle. It offers an example of a stout defense with an unproven quarterback matched against one of the game's elite quarterbacks who has question marks at the remaining skill positions. PFF Greenline offers no discernible edge in any of the full game gambling markets. With a -3.5 spread, our simulation mean outcome is -3.9 but gives Oregon a 51.4% chance of covering due to the hook forcing the key number of -3 away from a push. According to PFF Greenline, the best bet is to wait patiently. If Auburn goes up early and pushes the in-game spread past a touchdown, the Ducks become playable with the thought that Herbert is capable of keeping this game close to the end.

Desmond Ridder flashed in his 2018 freshman campaign, posting a 76.2 PFF passing grade. Among returning FBS quarterbacks, Ridder had the eighth-highest big-time throw percentage, one of our most stable stats when evaluating quarterback play. We already discussed having our eyes on the Bearcats to win the AAC. After opening at -4.5 Bearcats, this line has dropped as game time approaches, currently hovering between -2.5 and -3 in spots. Laying the Bearcats as less than a field goal favorite at home against a Bruins squad whose offense we have ranked at 111th in the country is one of our best bets of the week.

This line looked great at -2.5, moving to -3 puts a damper on expectations and applies a push to quite a few outcomes. Dorian Thompson-Robinson should look much more comfortable in Year 2 of Chip Kelly’s offense. Kelly has always been an innovator who has embraced analytics like few other coaches. With math on his side and Vegas moving in his direction, there is a distinct possibility that Kelly pulls a few tricks to scrape by with a victory on Thursday night.