The college football season is officially back, and with it comes PFF Greenline. Available to all ELITE subscribers, PFF Greenline surfaces the information you need to know for your weekly gambling experience, providing real-time looks at projections for the spread, totals and moneylines for all NCAA games between FBS schools. The goal of PFF Greenline is to leverage PFF play-by-play grading and other charting data to give PFF’s ELITE subscribers not only the side of the game to be on, but some of the “why” behind each overall number.

The PFF College Greenline Game of the Week for the first week of the season pits two national powerhouses as the Oregon Ducks take on the Auburn Tigers. 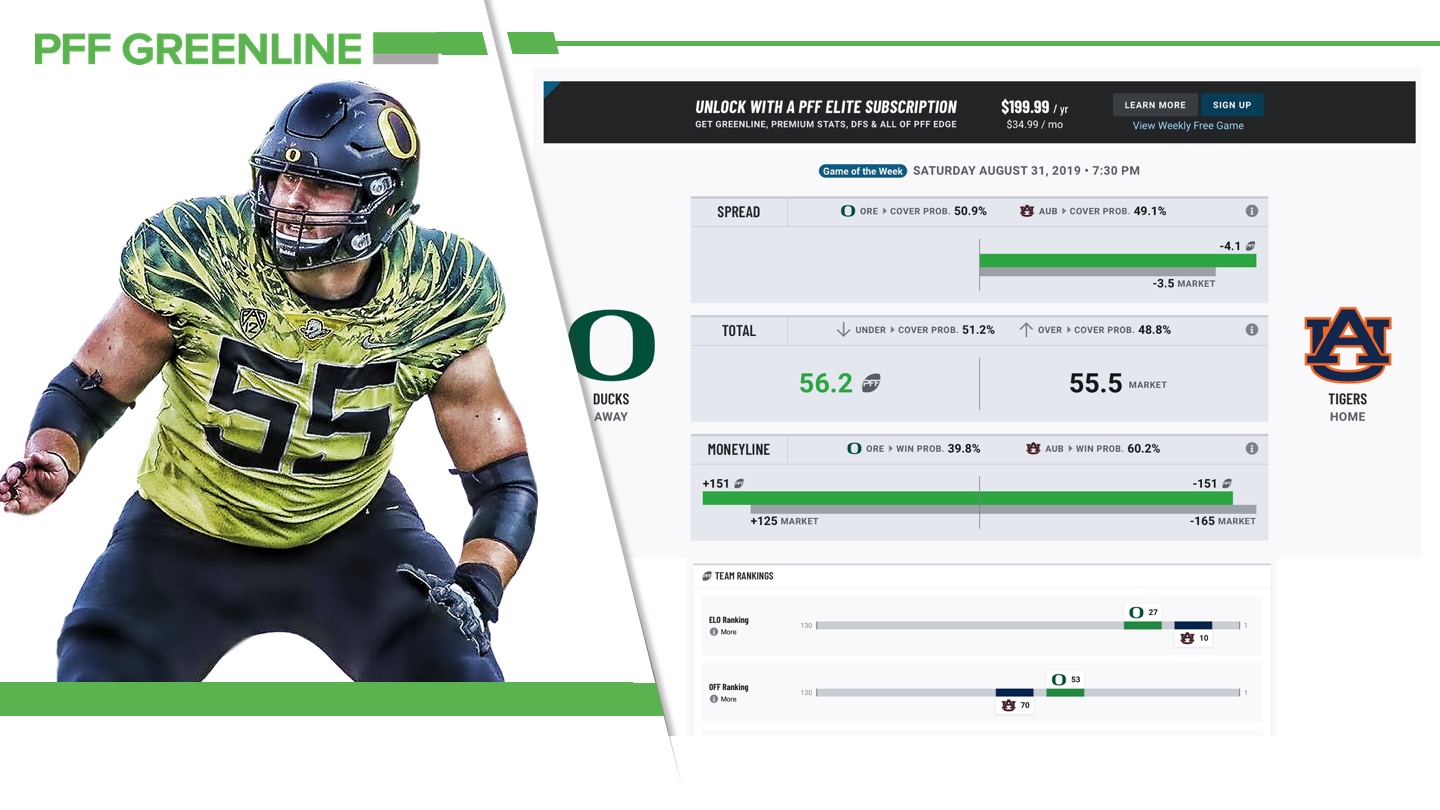 Oregon returns the nation's top offensive line yet Auburn, out of the SEC, returns a complete team outside of their true freshman quarterback. Bo Nix will have a roster stacked in talent to aid him in head coach Gus Malzahn's system, and with that, the PFF Greenline model currently has Auburn with a 60.2% chance to win outright.

Nix gets the start for the Tigers, entering the fold as the No. 1 quarterback in the country a season ago by Rivals with a great pedigree behind him. He becomes the first true freshman quarterback to start for Auburn since 1946. He'll have to square off against an underrated Oregon defense that could make things difficult.

Oregon's starting secondary of Verone McKinley, Thomas Graham, Jevon Holland, Brady Breeze and Deommodore Lenoir pose a difficult challenge for Nix as they each return with some solid play from a season ago. Holland is the highest-graded of the group, dominating as the primary coverage defender. Graham and Lenoir each allowed multiple touchdowns but came down with several more plays on the ball. Graham's 15 pass breakups are the tops on the team as the secondary is a ball-hawking unit.

Where the Ducks certainly have the advantage is in the quarterback room.

Justin Herbert returns as the third-best quarterback according to our starting quarterback rankings, entering into 2019 with strong three-year grades during his time in Eugene. He struggled a bit last season but did show promise with his deep ball, unfortunately for him, however, he led the nation with eight of his deep passes dropped. That total was two more than any other returning quarterback in the country.

Perhaps the best battle during this entire game is actually the Ducks' offensive line against the stout Auburn defensive line.

The Ducks return five starters from a year ago and over 9,000 career snaps among their group. Shane Lemieux and Calvin Throckmorton headline the group but Dallas Warmack was the nation's highest-graded guard over the final three weeks of the season in 2018 and Penei Sewell fielded the highest grade for a true freshman tackle that we've ever given.

They were equally as strong in pass protection as they were in the run game and they'll have their work cut out for them in this matchup against a strong Auburn front.

Derrick Brown is the standout from the group, landing on the first-team of All-American list as he has missed just four of his 85 tackle attempts over the past two seasons and is fourth among defensive interior players in pressures. Nick Coe and Marlon Davidson are the other featured players here as they are expected to have a dominant season for Auburn. Davidson has racked up 79 career pressures, playing over 1,800 snaps in his three-year career to date.

Coe has improved his grade and snap count each season as well since 2017 and in doing so, has upped his pressure total and defensive stop total in each of those seasons. All signs point towards a big year for him. Coe's best game last year came against Pac-12 foe Washington, in the season opener, and there's always the likelihood that repeats itself.

This game is the pinnacle of Week 1 action on the college football horizon. Two powerhouse teams from differing conferences, way across the country from one another. If Justin Herbert wants a legitimate shot at the Heisman this season, he needs to dominate this Auburn team.

If the Tigers want a shot at state-rival Alabama, they need to set the tone early and show the nation what they're capable of this year.

One thing is for certain, AT&T Stadium will be rocking and you'd be best advised to get your bets in now using PFF Greenline!