Welcome to the NCAA Team of the Week for the Conference Championships. As always, our team of over 500 analysts has dissected and graded every snap of every game to bring you the most detailed and valid set of picks you can find anywhere.

The Conference Championship Team of the Week saw many impressive performances across the country and as always, overall grades and playing time have been factored in to make these selections. 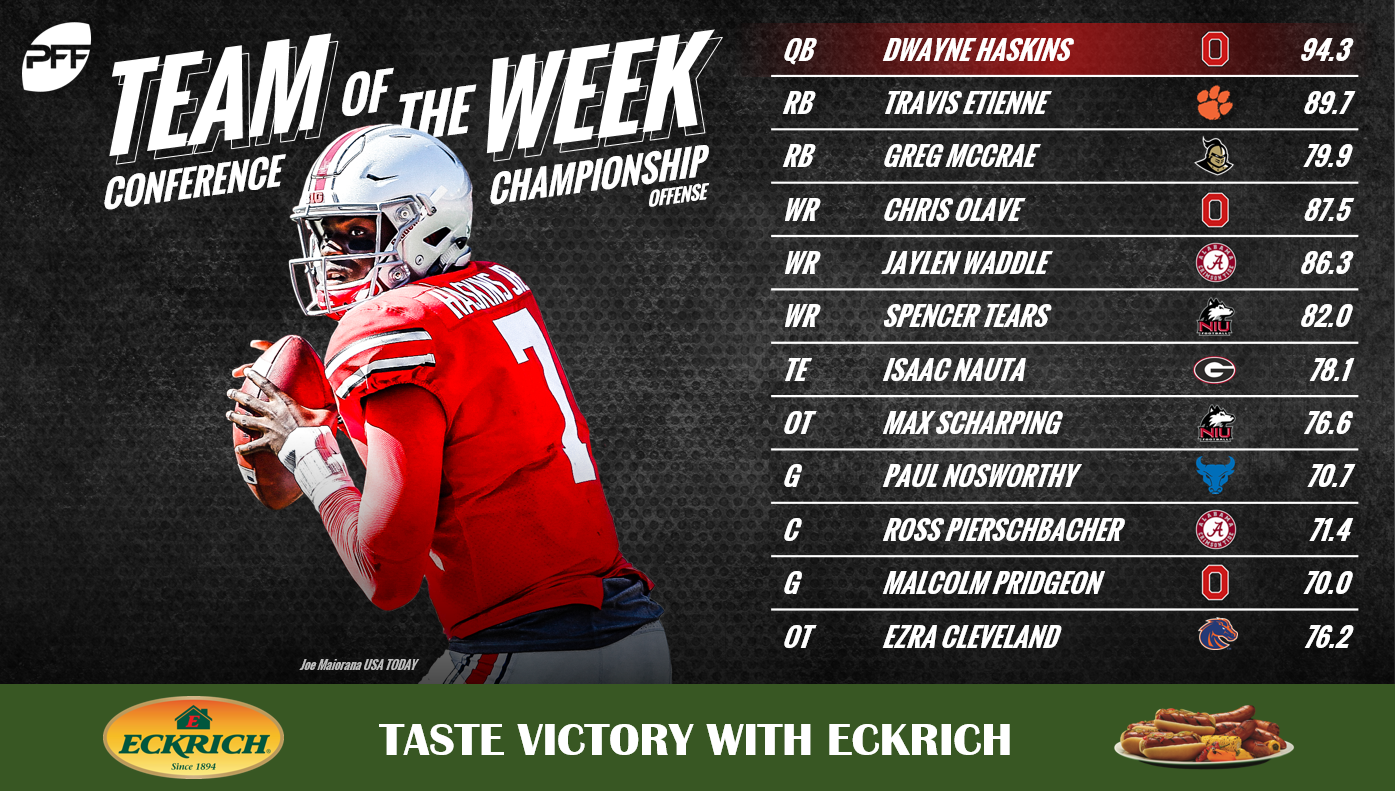 Haskins set all sorts of records in his dominant performance against Northwestern in the Big Ten Championship game. On deep passes (targeted 20-plus yards downfield), he completed 7-of-9 passes for 216 yards and four touchdowns for a perfect 158.3 passer rating – all of which led the nation this weekend.

On just 12 carries against Pittsburgh, Etienne gained 156 yards including 72 yards after contact, forcing five missed tackles and two touchdowns. Etienne started the game with a bang, carrying the opening touch 75 yards for a touchdown.

McCrae and the Knights spotted Memphis 17 points before storming back to win their 25th straight game. He gained 216 yards on 24 carries and iced the game with his four-quarter effort – rushing four times for 80 yards (60 after contact) and two first-down runs to put the game away.

Continuing his strong debut season for the Crimson Tide, Waddle snagged four receptions for 113 yards and a touchdown including 52 yards gained after the catch. He forced two missed tackles after his receptions as all four of his catches went for a touchdown or a first down.

Tears had perhaps the catch of the weekend when he made a one-handed grab in the second quarter for NIU's first touchdown of the game. Tears also had a second ridiculous catch called back by a penalty in which he tipped the ball to himself before scooping it off the turf rounded out his solid evening.

While Oklahoma's Grant Calcaterra had the biggest moment from the weekend with his one-handed touchdown grab, Nauta was tough for Alabama to cover all game long, hauling in all four targeted passes for 81 yards and a touchdown. He saw a perfect 158.3 passer rating when targeted in the process.

On 42 snaps in pass protection, Scharping didn't allow a single QB pressure and finished with the fourth-highest run-blocking grade this weekend.

Nosworthy was not at fault for a single sack or hit on Tyree Jackson while he also sports the highest run-blocking grade from guards in the conference championships.

Pierschbacher didn't allow a single pressure from 40 snaps in pass protection against the talented Georgia defensive line while finishing with the third-highest run-blocking grade among centers.

Allowing just a single QB pressure on 50 snaps in pass protection, Pridgeon also impressed with his run-blocking grade that was fourth-highest among guards. 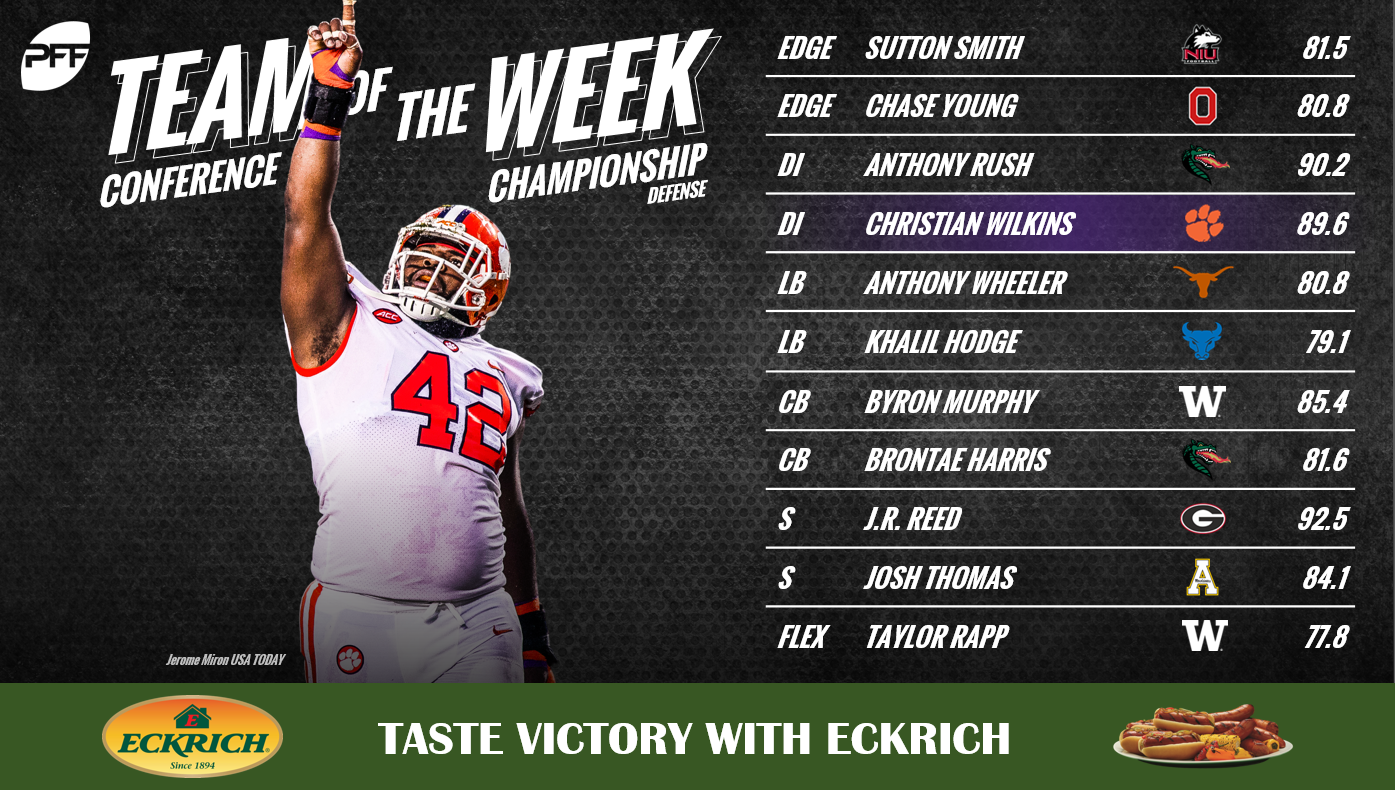 Smith led all defensive players with nine QB pressures this weekend, dominating action when he needed to. He recorded two sacks and seven additional hurries, coming away with several big-time moments in the second half.

Young was tough to block all game long for Northwestern's offensive line, coming away with six QB pressures that included three sacks. He forced a key fumble and did all his damage without missing a single tackle attempt.

Rush was almost unblockable for the Blazers in their championship game victory. He recorded seven QB pressures from the interior of their defensive line as well as two stops in run defense.

Wilkins needed just 18 pass-rushing snaps to record three pressures while he also came away with two run stops on 22 snaps in run defense.

A defensive player from the Big 12? Sure. When you record three pressures on 13 blitzes, make seven stops and allow the only targeted pass your way in 28 coverage snaps to go for just three yards, that's a clear-cut recipe for Team of the Week honors.

Hodge was all over the field for the Bulls, recording eight total tackles and no misses. His six defensive stops were tied for fourth among linebackers as he also chipped in with a pass breakup in coverage.

Murphy scored the only touchdown of the Pac-12 Championship game when he happened into a dropped pass that fell into his hands and he scampered for a pick-6. He also grabbed another interception and a pass breakup as he was targeted five times and did not allow a single reception.

Harris has been putting up ridiculous statistics in coverage for UAB all season long and the Conference USA Championship game was just another performance we've come to expect. On five targets, he allowed just three receptions for a mere 14 yards while coming away with a pass breakup and just a 64.6 passer rating when targeted.

Reed picked off Tua Tagovailoa in the early stages when it looked like Georgia was going to knock off Alabama once again but his performance went further than that lone moment. On 40 snaps in coverage, he was targeted four times, allowed two receptions for just 22 yards and saw a 27.1 passer rating when targeted.

Thomas also had a day in coverage for App State – seeing one lone target as the primary coverage defender. He pulled in an interception and saw a 0.0 passer rating when targeted and an 89.7 coverage grade that was the second-highest mark of the weekend.

Rapp was all over the field for the Huskies defense, registering plus-grades in all facets. On six pass-rushing snaps, he brought in three pressures while he also made a pass breakup and allowed just one reception for five yards on 26 snaps in coverage.