• 31st in passing success rate allowed, Las Vegas has surrendered 17 touchdowns through the air ahead of Tyler Lockett/D.K. Metcalf mismatch.

Player Props have one of the most popular markets offered in sportsbooks right now. Because of its similarity to fantasy football, something most bettors grew up playing, it’s easy to translate the thought process from fantasy football to player props. Utilize the Best Bets tab on the PFF website to help sift through the most +EV props based on our model to help with your betting success. 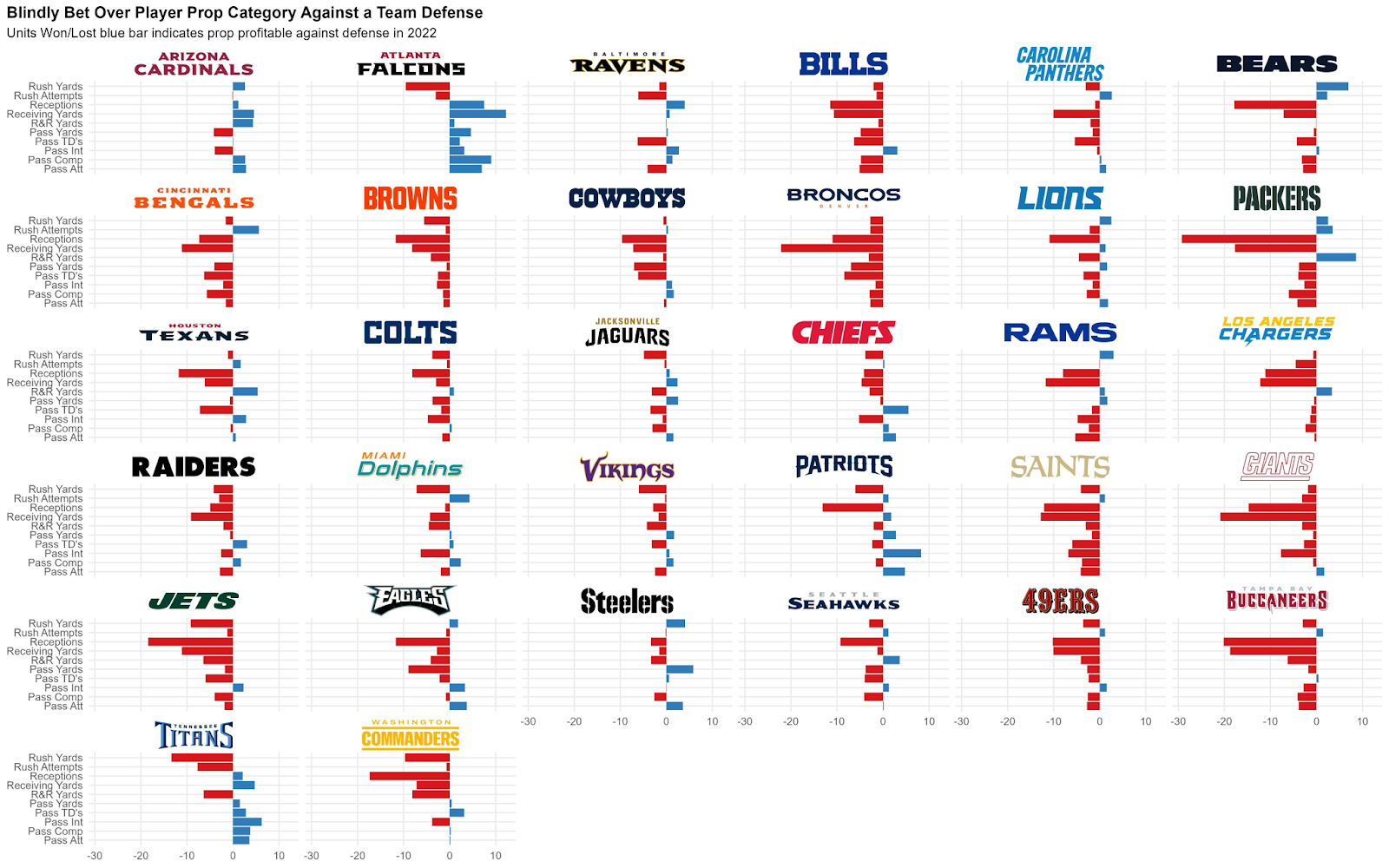 • Atlanta allows the most receiving yards to wide receivers of any defense in the NFL: As seen in the graphic above by analyst Ben Brown, receiving yards overs have been very profitable vs the Falcons this season.

• Even with the return of A.J. Terrell, McLaurin should have his way with this Falcons defense: Terrell actually has not been that great in coverage this season (51.2 PFF coverage grade).

• McLaurin was on pace to easily go over his receiving-yard total in Week 11: But a negative game script eliminated that chance vs the Houston Texans. Washington should get a better fight from Atlanta.

• This number is too high for Kittle: He's only gone over 47 yards in 3 of his 8 games this year. Usually his prop number hovers around the 42-44-yardage mark, but because he had a big game vs the Cardinals (as all tight ends do), his yardage number is a bit higher than usual.

• Saints allowing the 5th-fewest receiving yards to tight ends: Mostly because of the great coverage play from Demario Davis, Pete Werner, and Tyrann Mathieu, all of whom have 70+ PFF coverage grades.

• Only 2 tight ends have eclipsed 45 yards vs the Sains this season: Including Tyler Higbee, who only reached 45 yards last week because of a garbage-time 20-yard catch with 33 seconds remaining.

• Moreau wasn’t really involved in the Raiders' aerial attack in Week 11: But that’s partly because Davante Adams was beating anyone who was guarding him, and Derek Carr was feeding him as much as possible.

• Moreau has 4+ targets in every other game this season: And without Hunter Renfrow and Darren Waller, he likely will be Carr's 2nd or 3rd option vs the Seahawks.

• Seattle is allowing the 2nd-most receiving yards to TEs: Jordyn Brooks and Cody Barton have sub-55 PFF coverage grades, which means Moreau should be open enough times to go over this prop number. 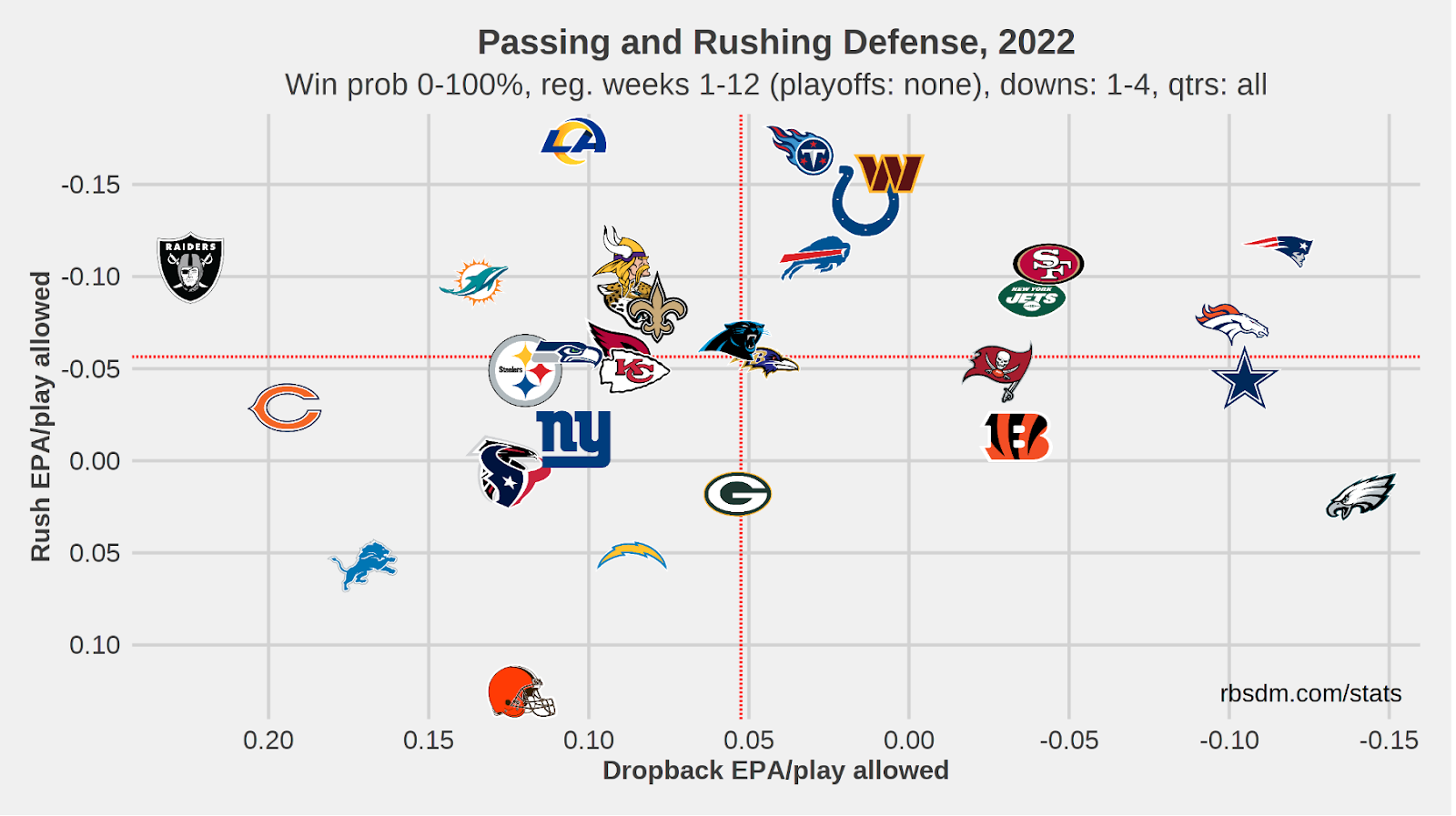 • Raiders pass defense arguably NFL's worst right now: They rank dead last in EPA/pass allowed, and 31st in passing success rate allowed. They’ve allowed 17 passing TDs this season (6th most), and are at a disadvantage on the outside vs Tyler Lockett and DK Metcalf.

• Geno Smith has been a revelation: Ranking highly in a bevy of QB metrics this season. He’s also gone over 1.5 passing TDs in 8/10 games this season and should have time to find open receivers vs a porous Raiders pass rush (27th in pressure rate).