NFL Betting 2020: How Sportsbooks are valuing teams and why

The decision of whether to bet on the NFL is made easier when one understands exactly how sportsbooks value the teams and determine the lines.

To examine this, we'll use a simple model that provides a projection of how a team's results from one year can estimate the results of the following year. We can then use sports betting lines to determine whether the market is above or below that number.

Once we have these numbers in place, we can examine how sportsbooks are valuing the teams and then look for teams with significant deviation or teams that are unusually priced.

To estimate a team's rating, we'll look at how many points they scored in each regular-season game in the previous season and then subtract how many points their opponent scored. We'll then adjust this number to reflect how strong the opposing team was and finally take the average of this value across the 16 games.

Given the amount of variance in football, this model does a reasonable job (R^2 = 0.204) of predicting — albeit in a general way — how many net points a team will score in the following season.

After the NFL releases the schedule, some sportsbooks will release a betting line against the spread for each of the 256 games. For this analysis, we'll use the lines posted by YouWager.LV.

After adjusting for home-field advantage, each line expresses, in points, a representation about how the two teams are relative to one another. Combining this across all of the different lines allows us to see an overall rating for each team, which we can express as a number that tells us how many points that team would be expected to win by (or lose by if negative) when playing against the average NFL team on a neutral field.

Using the chart below, we can compare each team's rating estimate to its market rating. The further a team is above the dashed line, the higher the market rating is from the estimate. The reverse is true the lower it is. 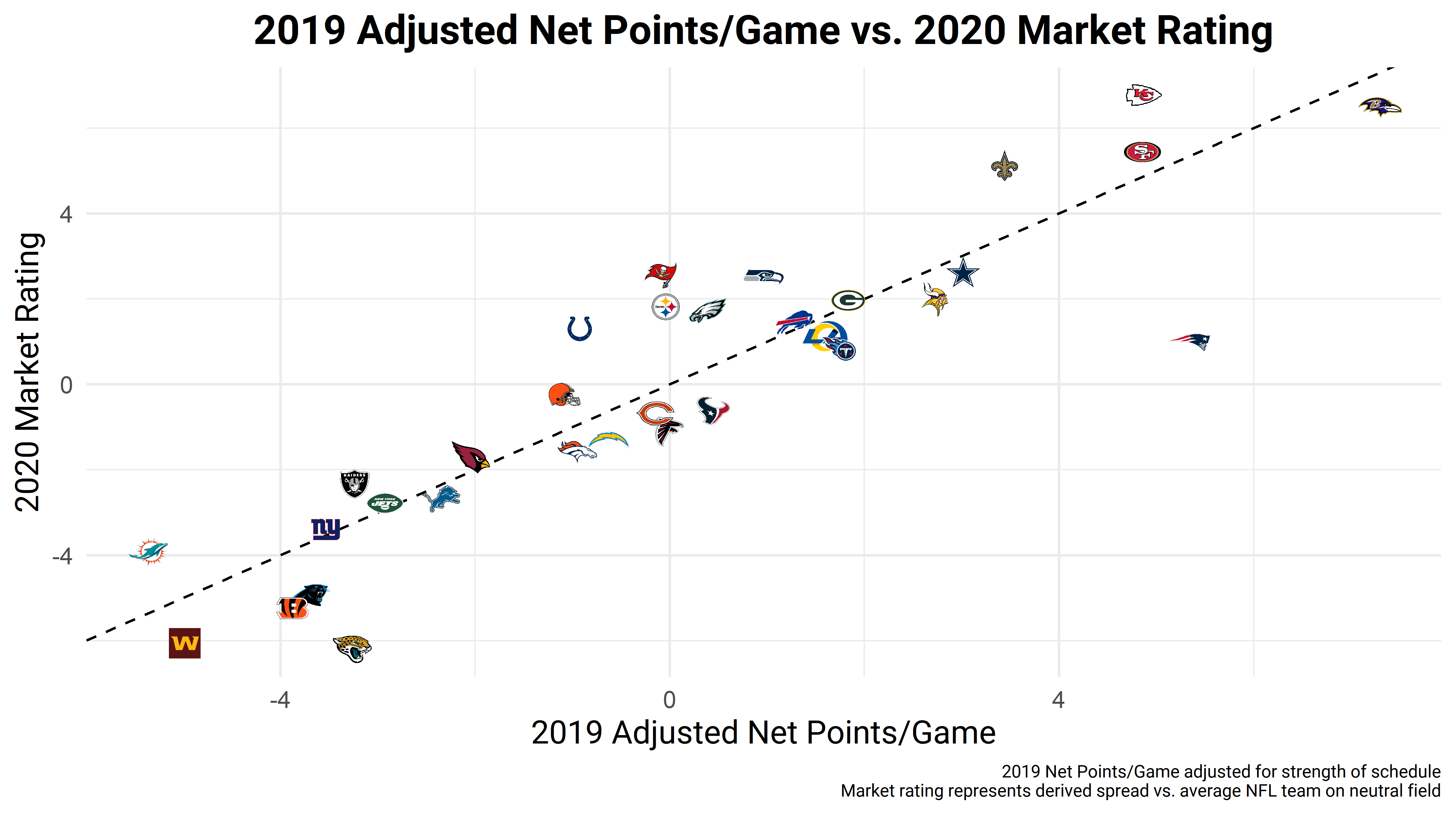 Now, let's look at the teams with the largest gaps and examine the factors the model might not have accounted for. The number in parenthesis shows how much better (or worse, if negative) the market is valuing them relative to the model's estimate.

While Brady's move in free agency is likely the major factor in these differences, the interesting thing is that the Buccaneers didn't go up as much as the Patriots went down — especially since the PFF grades of Cam Newton — who is set to replace Brady for the Patriots — and Jameis Winston — who is set to be replaced by Brady in Tampa Bay — have been similar over the past few years (Newton's two-game 2019 season aside).

Brady has obviously been great for the Patriots, even if last year's 79.0 PFF grade represented somewhat of a down year for him, but the Buccaneers number is about Brady's future. At some point, his age (43) will catch up with him. That may or may not happen this season, which lines up with the expected gain for the Buccaneers being smaller than the loss for the Patriots.

The Colts have certainly upgraded at quarterback, with Jacoby Brissett (PFF grade of 59.2 in 2019) making way for Philip Rivers (74.3). The Steelers should also expect improved quarterback play, as Mason Rudolph (53.0) and Devlin Hodges (45.8) no longer have to fill in for an injured Ben Roethlisberger (78.2 in 2018).

Dolphins quarterback Ryan Fitzpatrick played well for the Dolphins last year (76.5). The team can continue to go forward with him if he's doing well, or they can choose to give Tua Tagovailoa the nod instead if the 2019 first-rounder is ready to go. This flexibility means the model number should be closer to the team's floor than its ceiling, so it makes sense that the market number is higher.

THE “WHAT REGRESSION?” TEAMS

These teams all have elite quarterbacks and have shown sustained success in the league, though it is understandable that the market is skeptical that they will regress as much as the model would expect for a “typical team.” On the other hand, these types of teams also tend to get disproportionate amounts of attention from public bettors.

The Chiefs had some luck working against them in 2019, which makes their number more realistic. But looking at the same data, the Saints benefited from +10 net fumble recoveries. And, of course, the Seahawks' wild finishes resulted in them going 9-2 in games decided by 7 points or less, which is not sustainable.

However, with the uncertainty of COVID-19, we would expect additional regression toward the mean beyond the normal amount, especially when thinking about a future or season-long bet.

THE “CAN'T GET NO RESPECT” TEAMS

The Bengals did have almost 4.5 wins below their Pythagorean expectation. That suggests a lot of regression, and, understandably, the market may only expect a portion of it to be realized.

However, it's entirely possible that we see a significant improvement from the Bengals now that rookie quarterback Joe Burrow is at the helm. That factor, coupled with the uncertainty of COVID-19, should push regression more toward the mean than the model estimates. There's also a greater chance that this team ends the season closer to its ceiling than its floor, so a negative expectation from the market relative to the model is surprising.

Starting quarterback Matthew Stafford was having an excellent 2019 season but sustained a season-ending injury halfway through the year and was replaced by Jeff Driskel (51.3 PFF grade in 2019) and then David Blough (57.7). As with several of the teams in the quarterback section, we'd expect a boost here.

Detroit had a few unlucky losses last year, but nothing suggests that they were particularly lucky. And while they do have quite a lot of transition on the defensive side of the ball, it was also already in the bottom 25% of the league in terms of EPA allowed per play, so some positive regression there should be expected.

PFF's Eric Eager recently wrote about betting the over on the Jaguars' win total, and this piece does an excellent job of covering the probabilities here. While the Jags are obviously among the worst teams in the league, the market — which is almost 3 points away from the model's estimate — appears to be placing a surprisingly large amount of value on defensive turnover along with the offensive playcalling transitioning from John DeFilippo to Jay Gruden.