How big is the gap in total points scored across different conferences in college football?

Some college football conferences are known for piling up points — most fans can recall plenty of Big 12 matchups going into the triple digits or weekday MACtion shootouts. On the other hand, quite a few Big Ten matchups over the years have had over/unders lined in the low 40s.

Though some conferences definitely have stigmas surrounding scoring, let's examine how significant the difference actually is when the numbers are broken down.

average Total points per conference Since 2014

The Big 12 is the highest-scoring conference in college football over the past seven seasons, to the surprise of no one. The Big 12 and American Athletic Conference were the only two conferences in this span to average more than 60 total points in conference games. The Big 12 has been anchored by Oklahoma when it comes to scoring, as its average point total of 43.9 in the seven-year span led the entire country.

The Kansas defense led the nation in points allowed in that span, and Texas Tech allowed the fourth-most points in the seven-year window. The distribution below shows the Big 12 has a noticeably higher density starting in the 65-75 point range. 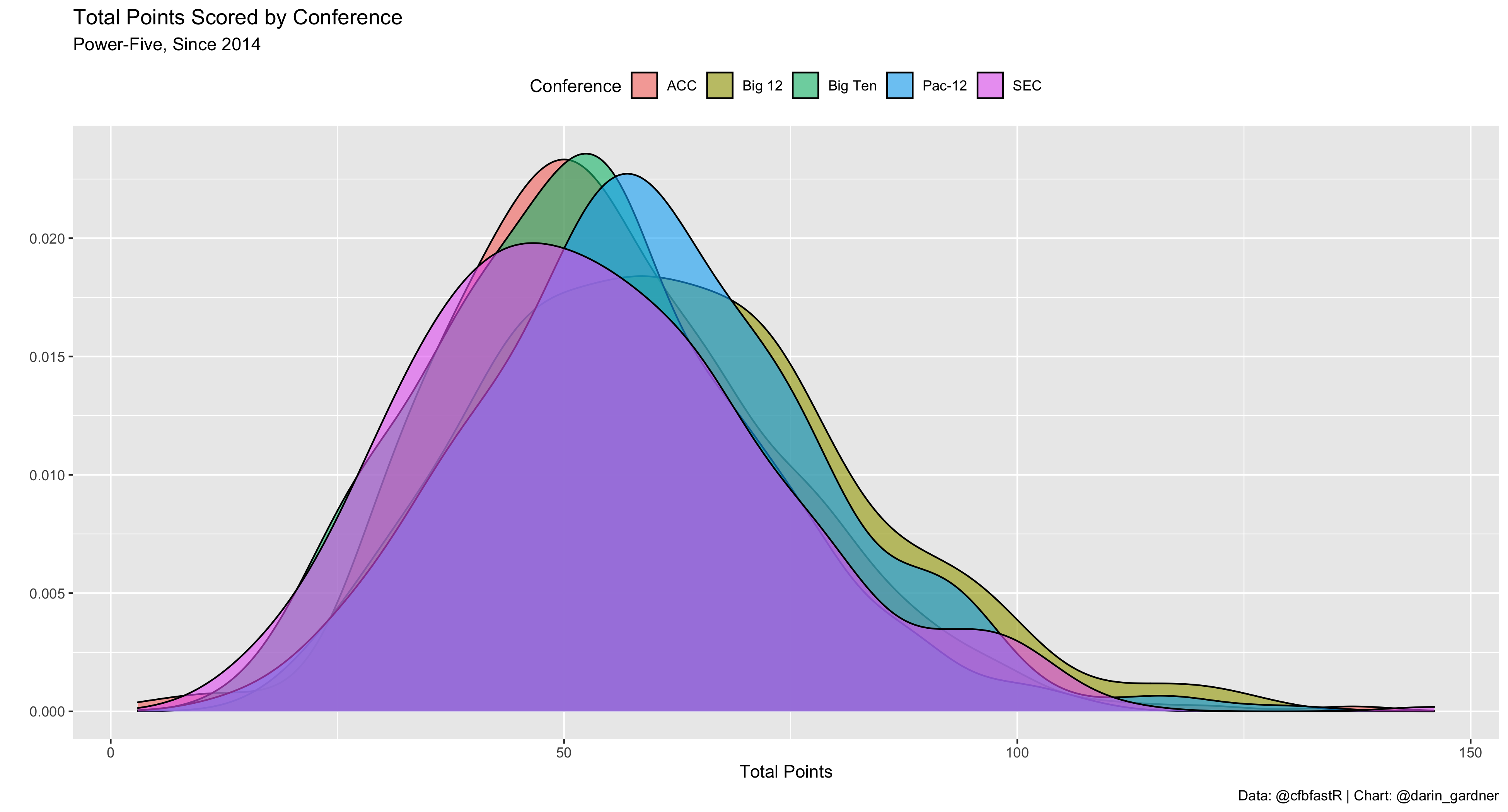 Unsurprisingly, the Big Ten was the lowest-scoring conference in the nation, followed by the SEC. The SEC has no shortage of points these days, but it wasn’t too long ago that teams like Alabama and LSU were built on the running game and strong defense.

The Big Ten has had several defenses contribute heavily to its last-placed ranking in points scored: Wisconsin, Iowa, Ohio State, Michigan and Penn State made up half of the country’s top-10 defenses in average points allowed from 2014 to 2020. Plus, Rutgers’ 17.9 points scored per game over that span was the worst in the country.

The American was the highest-scoring conference in the Group of Five. The gap between the AAC and the second-highest G5 conference was actually larger than the gap between second and last. A lot of explosive UCF and Memphis teams come to mind when thinking about recent years, but Houston, Navy and SMU have all had seasons with high-powered offenses as well. Having UConn and East Carolina’s defenses in the conference through the years didn't hurt, either.