The 2020 NFL season is in full swing, and for many teams, it will be halfway over after this weekend. While it felt sort of weird writing about futures and player props in the offseason — when the 2020 campaign was far from a certainty — it’s refreshing to get another opportunity to write about a season-long betting opportunity vis-à-vis player props.

Last week gave us a surprise. With the rebuilding Miami Dolphins at 3-3 and in the thick of the playoff race in the AFC, rookie quarterback Tua Tagovailoa was inserted into the starting lineup in place of veteran journeyman Ryan Fitzpatrick, despite Fitzpatrick having played well for much of his tenure with the team. Seeing an opportunity, many sportsbooks hung props for the former fifth overall pick of the 2020 NFL Draft, with FanDuel Sportsbook putting Tua’s passing yardage and touchdown props at 1,999.5 and 11.5, respectively.

According to PFF's fantasy projections, which assume a (mostly) healthy 10 games from Tua and his supporting cast, these numbers are short. As such, I’d advise overs to both of these props. Here are a few reasons why.

The Dolphins' Supporting Cast is a Decent Bunch

One of the reasons Fitzpatrick had such a good second half of 2019 and a good start to 2020 is the play of wide receiver DeVante Parker, a man who was once thought of as a first-round bust out of Louisville in 2015. Parker is averaging over 9 yards per target this year after averaging over 10 yards per target in 2019. Mike Gesicki, Jakeem Grant and Preston Williams have also all had productive periods for the fish, and their stable of running backs has hauled in 40-of-42 targets this year.

One of the concerns for Tua as he takes over this role is the lack of congruence between his and Parker’s preferred spaces on the field (shown below), with Tagovailoa preferring the middle of the field and Parker favoring the outside. It will be interesting to see how the target shares evolve for the Dolphins and if we see more from Gesicki and the recently extended Adam Shaheen in the middle of the field moving forward.

Another concern for the Dolphins offense is that their offensive line remains in the bottom third of the league in both pass-blocking and run-blocking grades, an issue Tua never had at Alabama. While he’s still mobile enough to avoid pressure, adding that task onto a rookie’s plate is a bit of a concern. However, Chan Gailey is currently a top-three playcaller in our metrics and should be able to help the young signal-caller get over this issue in Year 1. 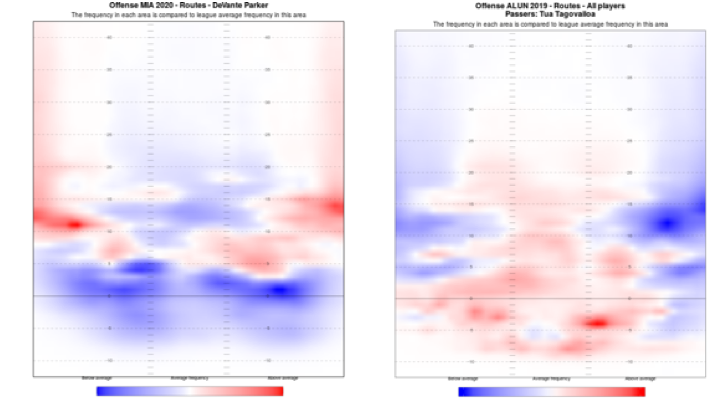 The Dolphins' Remaining Schedule is OK, and it Might Get Easier

Using our fantasy football strength of schedule tool, Tua has an above-average schedule for quarterbacks in terms of ease. And in their last four games, which is when Tua will presumably be hitting his stride as a quarterback, they face relatively easy defenses in Kansas City, New England (who at this point might have traded some key pieces), Las Vegas and Buffalo, who, aside from the New York Jets, haven’t stopped anyone.

There are some concerns about how Tua meshes with Parker, the best player on the Miami Dolphins offense, and obviously a lack of health can tank any of these bets in the blink of an eye. But if Tua stays healthy, the combination of their weapons, coordinator strength and schedule should make OVER the only side of either of these two bets.