2020 NFL Win Totals: Why betting Baltimore Ravens under 11.5 wins is a good idea

The market criminally underrated the Baltimore Ravens last year, mostly because almost everyone (including us here at PFF) failed to anticipate Lamar Jackson’s drastic improvement as a passer, how well the Ravens would use his unique skill set to dominate the league and that a scheme change (which was inevitable with the transition from Joe Flacco to Lamar Jackson) can generally spark a highly efficient season.

Going into the 2020 NFL season, the Ravens are viewed much more favorably, as their win total of 11.5 is tied for the highest with only the defending champion Kansas City Chiefs. However, even though it comes with the risk of us underrating the Ravens for the second year in a row, we think this total is high enough that the under is a good play right now.

The Ravens were the best team in 2020, but replication is hard

First of all, the Ravens were absolutely dominant in 2019. We see 14 win-seasons every other year, but Baltimore's point differential of +249 ranks second to only the 2007 New England Patriots since 2006.

However, just by using base rates, replicating a strong season is hard to begin with. Since 2006, there have been 60 teams that managed a record of 12-4 or better; 19 of them — not even a third — were able to win at least 12 games in the following season, and 14 of these were quarterbacked by either Tom Brady or Peyton Manning. So, if they’re not quarterbacked by maybe the best quarterbacks to ever play the game, the teams simply haven’t been able to win that many games over the course of two seasons.

The base rates don’t get any better when looking at an even higher win total in the prior season. Teams that won 13 games went on to win at least 12 games the next season only 26% of the time. For 14-win teams, the rate was 29%.

When the base rates are already telling us that a team is unlikely to repeat a season of 12 or more wins, why aren’t we writing this article about the Kansas City Chiefs, who currently have the same win total of 11.5? Well, we will outline some of the reasons in this very article.

We have more confidence in Mahomes being elite

It’s not a coincidence that the Ravens and Chiefs have the highest win totals, as they field the two most recent MVPs of the league. Lamar Jackson and Patrick Mahomes might become the two defining quarterbacks of this decade (at least after Russell Wilson eventually slows down due to age), but due to the sample size, we have much more confidence in Patrick Mahomes going forward.

When assessing Lamar Jackson’s range of outcomes, the question is whether we should ignore his 2018 season (which would significantly lower our expectation). Since we found that the rookie season doesn’t carry a lot of predictive power for the quarterback position (a finding that is unique to the quarterback position) and saw just how much the game slowed for him in the passing game in 2019, we think it is fair to assess his future outcomes using only his 2019 season as a basis for our computations. Nevertheless, Patrick Mahomes’ range of outcomes has a significantly higher floor and ceiling. 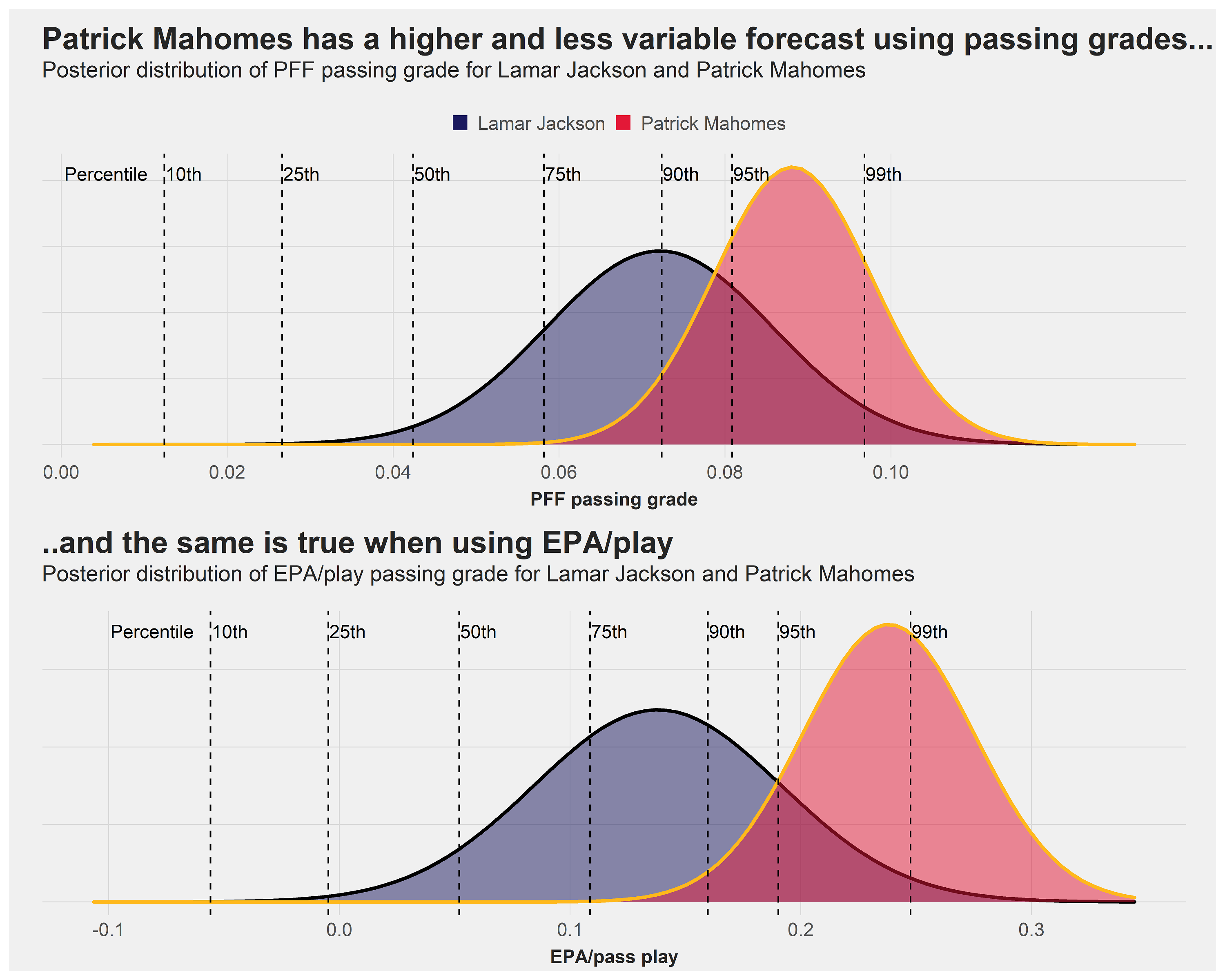 Based on the distributions above as well as the distributions of all other quarterbacks, we simulate the 2020 outcomes for all starting quarterbacks while incorporating seasonal variance. Patrick Mahomes ended up better than Lamar Jackson 73% of the time, and Mahomes has a much better chance to end up as a top quarterback in 2020.