Investigating how past performance matters for the future

It goes without saying that a huge part of free agency is player evaluation, and while assessing how a given player played in the past can already trigger heated discussions, it’s even more difficult and also more important to figure out how good a player will be going forward. This is generally easier when it comes to NFL free agents than it is for draft prospects, as we’ve already seen how these players perform in the NFL for usually at least four years.

In this article, we want to examine how the most recent season compares to the career production of a player in terms of importance when looking forward.

Naturally, we start with the most important position in the game, and fittingly we find ourselves in a year in which quarterbacks play a huge role during free agency with Dak Prescott (tagged), Tom Brady, Philip Rivers, Jameis Winston and Teddy Bridgewater potentially hitting the open market and other long-time starting quarterbacks potentially available via trade (Andy Dalton and Derek Carr come to mind). 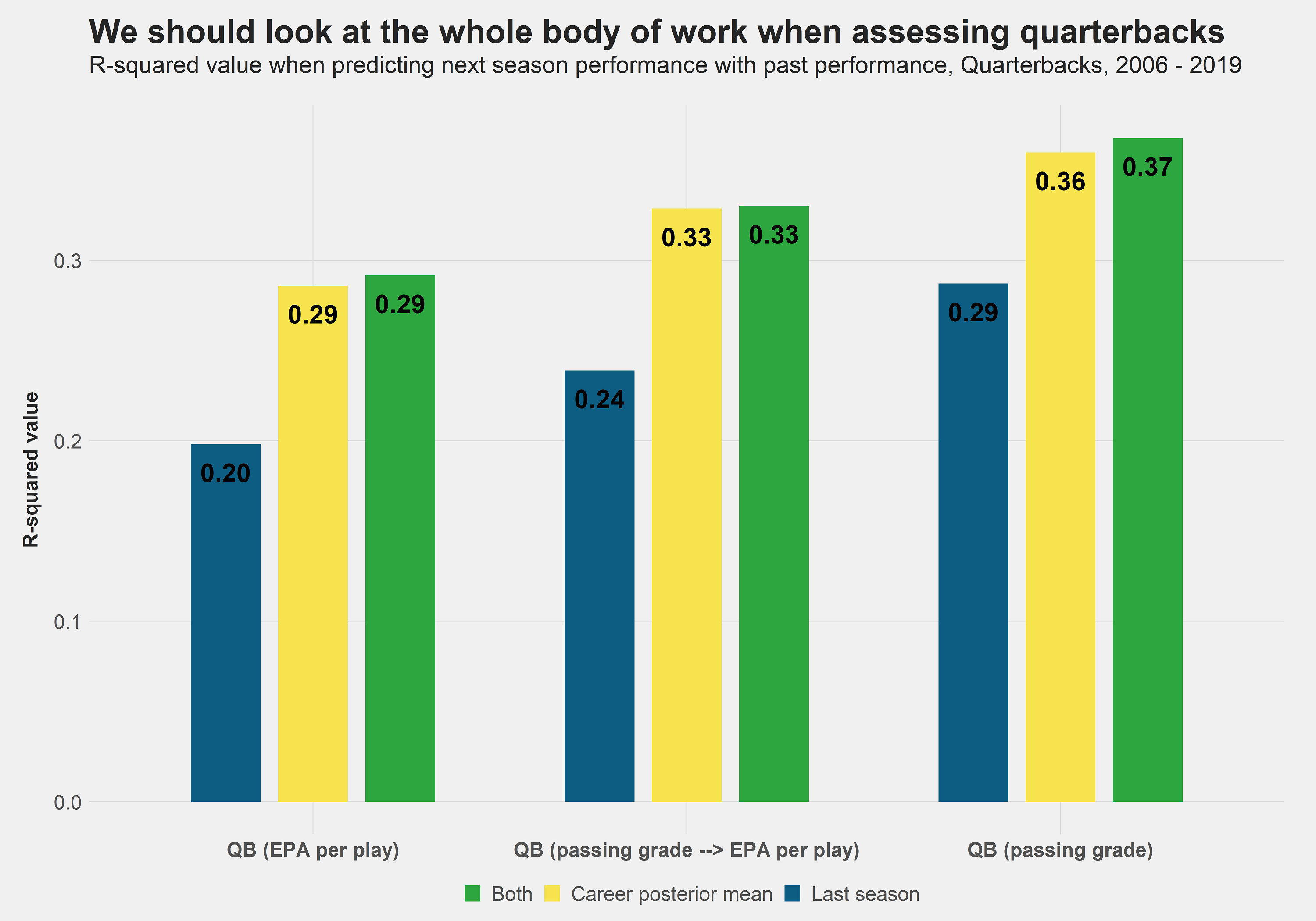 We find that no matter whether we measure a quarterback’s play via our PFF passing grade or via expected points added per pass play, the whole body of work (as estimated by the posterior mean) has a higher predictive value for the future.

It is particularly interesting that, when using both measurements of past performance as predictors, our forecast hardly turns out to be any better, which is a sign that we might overvalue the most recent information.

Of course, this does not mean that the most recent season isn’t more important than the seasons further away in time (the R^2 value when predicting the next season with the season two years ago is significantly lower than when using the last season), but it suggests it is definitely a bad process to throw away any older information. Assessing the best weights for past data depending on how far in the past the data comes from is another interesting question for the future.

For quarterbacks, we find another interesting effect: The rookie season doesn’t carry much predictive power. The R-squared value for the transition from Year 1 to Year 2 is only 0.10 and, consequently, after removing second-year players from the equation, the predictive power of the career posterior mean (for PFF passing grades) rises from 0.36 to 0.40. This effect is only existent for the rookie season and, interestingly, we couldn’t replicate this finding to such a significant extent for any other positions.