With eyes towards the 2018 NFL Draft, here are the players to keep your eyes on in the Chick-Fil-A Peach Bowl. 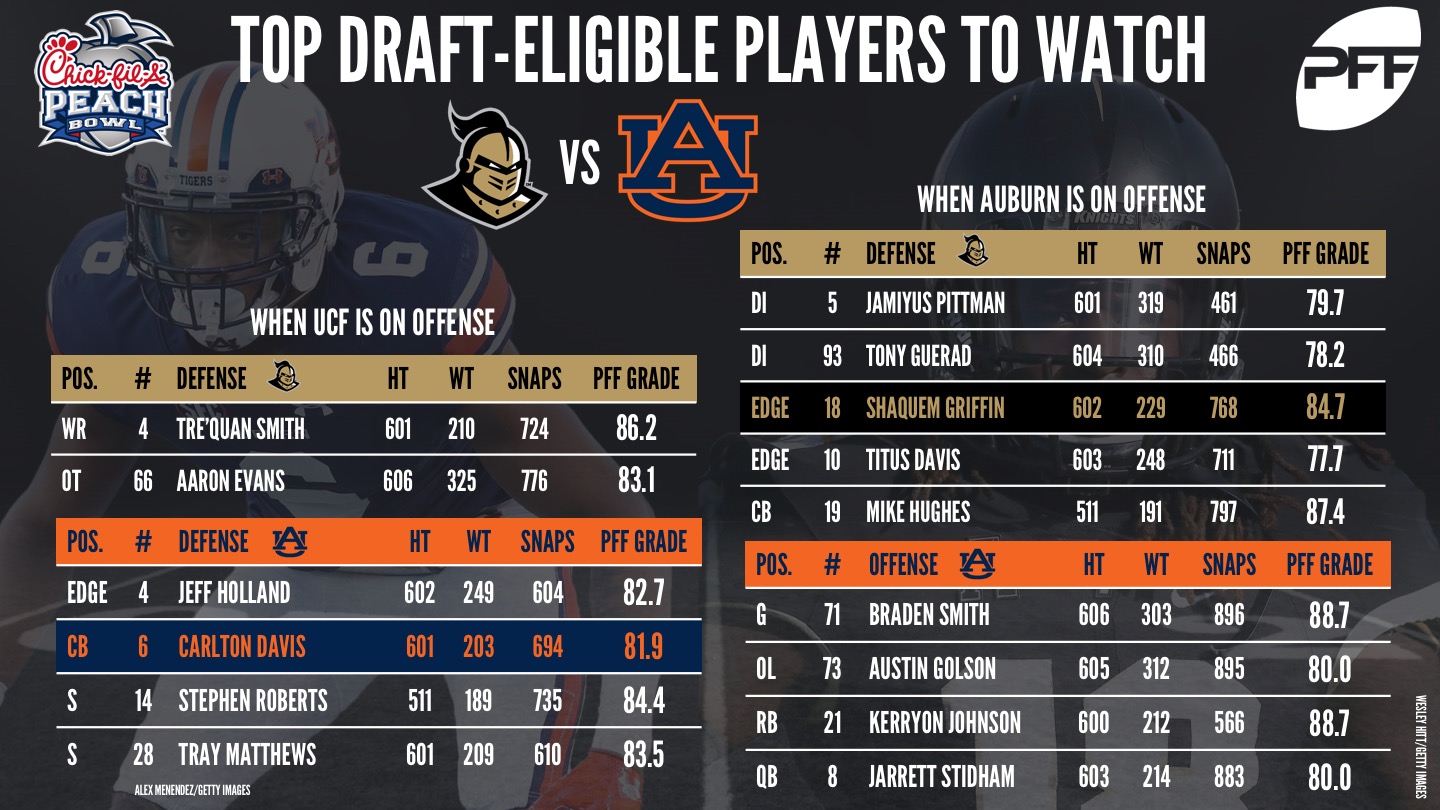 When Auburn is on offense:

Quarterback Jarrett Stidham has excelled in more than one college team’s offense and has performed well for the Tigers this year. Stidham’s adjusted completion percentage of 76.6 percent ranks No. 7 among all FBS draft-eligible quarterbacks. He has been one of the more effective deep passers in the nation this season and his adjusted completion percentage of 45.3 on deep passes (20 or more yards downfield) ranks him 15th among all FBS draft-eligible quarterbacks with at least 50 deep attempts.

Guard Braden Smith has proven to be one of the better pass-protecting guards in the country over the last three seasons as he has only given up four sacks, six QB hits and 11 hurries over the 2015-2017 seasons. This year, Smith has surrendered two sacks, no QB hits and three hurries on his 408 pass-blocking reps and his pass-blocking efficiency rating of 99.0 ties him at No. 8 among FBS draft-eligible guards. 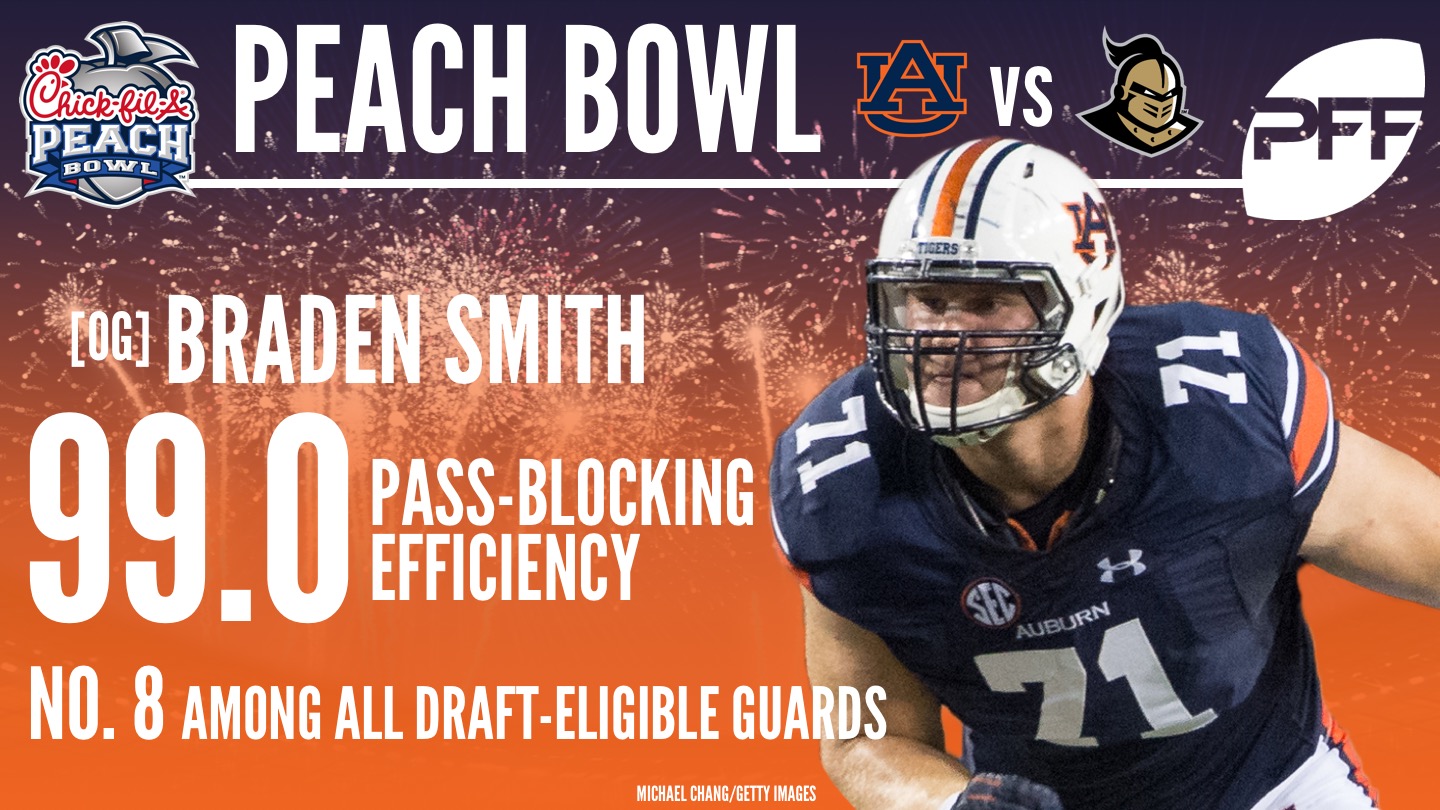 UCF’s best defensive player is the hyper-athletic linebacker Shaquem Griffin. As a pass-rusher, Griffin has four sacks, six QB hits and 28 hurries on his 179 pass-rush snaps and his pass-rushing productivity of 16.5 ranks third among all FBS draft-eligible 3-4 outside linebackers. He is also a solid run-defender and his 20 run stops rank No. 17 among all FBS draft-eligible 3-4 OLBs.

When UCF is on offense:

The Knights' offense is well-coached, highly-productive and tough to slow down. Their offense is led by quarterback McKenzie Milton who isn’t draft-eligible but is highly accurate in their scheme as his adjusted completion percentage of 77.4 ranks fifth among all FBS quarterbacks. When Milton wants to push the ball down the field, he targets wide receiver Tre’Quan Smith who has caught 13 deep passes this season for 491 yards and seven touchdowns. His seven deep touchdowns ties him for No. 3 among all FBS draft-eligible wide receivers. 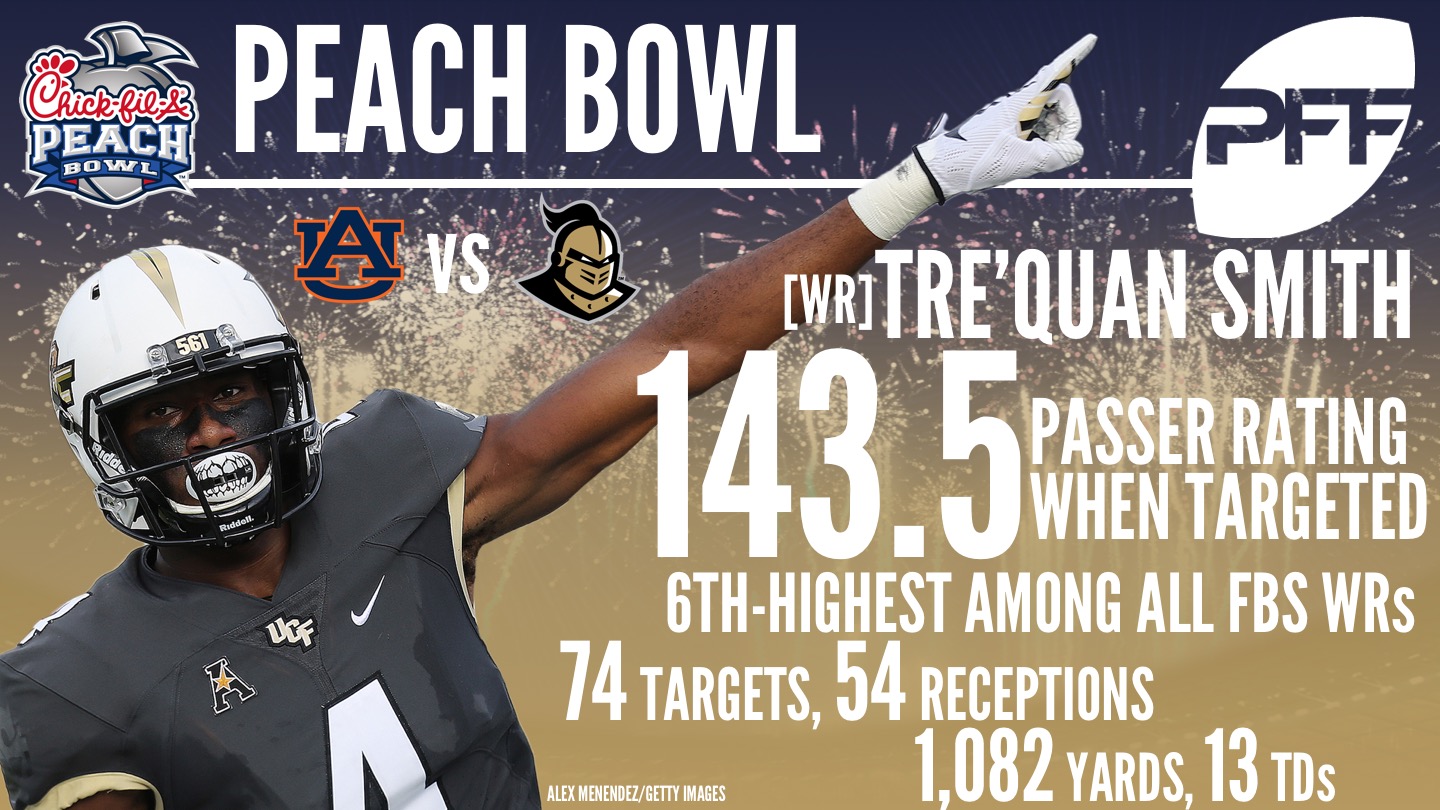 Auburn edge defender Jeff Holland has been one of the more productive pass-rushers in the country this season. He rushed from the left side  on 86.4 percent of his pass-rush snaps this season but was able to generate multiple pressures from both sides of the defense. On the year, Holland generated 10 sacks, 11 QB hits and 34 hurries on his 295 pass-rush snaps and his pass-rushing productivity rating of 15.7 ranks fifth among all FBS draft-eligible 3-4 outside linebackers.

The Tigers hold several talented defensive backs, including cornerback Carlton Davis, who is questionable for the game due to concussion symptoms. A healthy Davis only allowed one reception for every 16 snaps in coverage which ranks No. 18 among all FBS draft-eligible cornerbacks with at least 300 snaps in coverage.