With the addition of C.J. Mosley, the Jets are set to field one of the most formidable run defenses in the NFL

Coming off of a 4-12 campaign, the New York Jets have very few bright spots to look back on. But the side can take solace from their run defense, as they finished the 2018 NFL season with a team run-defense grade of 90.7 — the fifth-highest mark in the NFL.

The Jets had a few standout players in this regard. Pro-Bowl safety Jamal Adams finished the 2018 campaign with 28 run stops which ranked first among all safeties in the NFL. In addition to this, Jets linebacker Avery Williamson recorded 29 run stops, which were tied for the 13th-most among linebackers. However, with the Jets’ new addition in C.J. Mosley, Gang Green may now have the weapons needed to make that very good run defense an elite one in 2019.

Since he entered the NFL in 2014, Mosley has finished with 80.0-plus run-defense grades in three of his five seasons. Last year, the Alabama product finished with a 75.4 run-defense grade which ranked fifteenth among linebackers who played at least 500 defensive snaps. His 30 run stops and his run-stop percentage of 10.9% ranked tied for eleventh and tied for seventh, respectively, among qualifying linebackers. 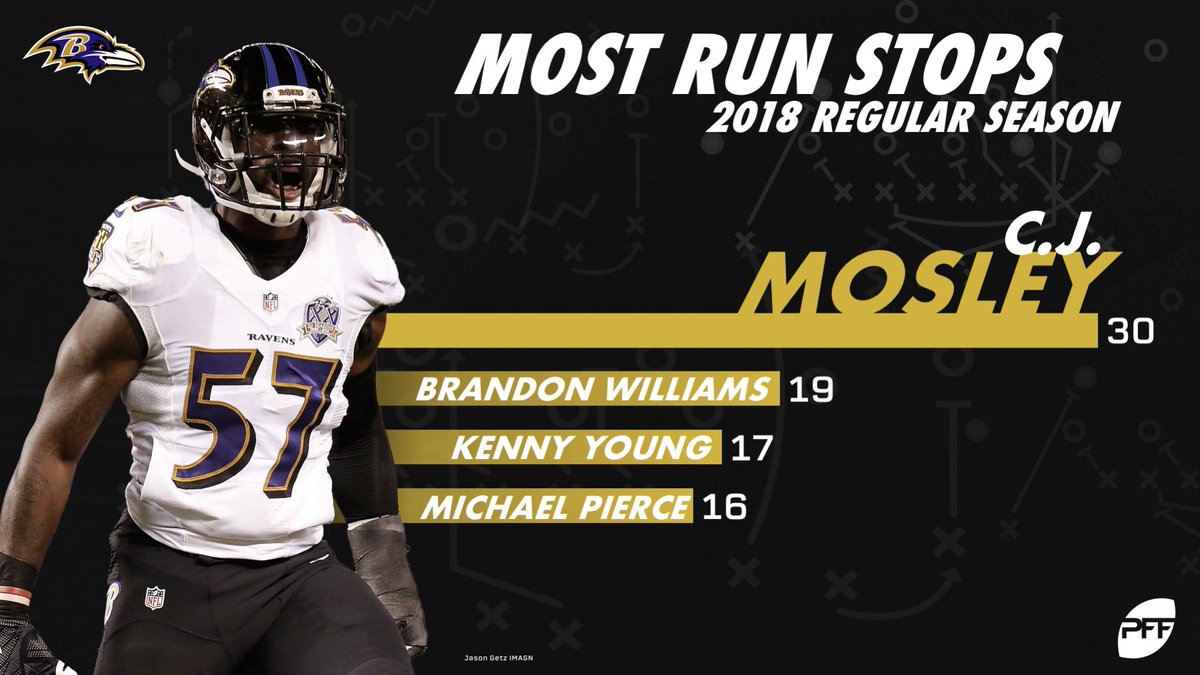 Mosley is set to be a great complement to fellow linebacker Avery Williamson, who finished with an 85.9 run-defense grade in 2018 — the fifth-best mark among qualifying linebackers — and it was the second straight year in which he earned a run-defense grade of 85.0 or higher.

This past season, in the Baltimore Ravens‘ playoff game against the Los Angeles Chargers, Mosley shined against the run, and fans should look no further than this game if they want to see the kind of impact he can have against the ground attack. His 86.5 run-defense grade was the highest among linebackers who played in the wild-card round of the playoffs in 2018 — he finished the game with two run stops and a 6.5% run-stop percentage.

Though Mosley has proved to be one of the league's better players against the run, there are other aspects of his game that stand out. The Pro-Bowler has also shown that he can make an impact as a pass-rusher, as he has racked up 27 total quarterback pressures from 224 pass-rushing snaps over the last two seasons — a top-20 figure among linebackers in that span.

A season ago, the Jets finished last season with a 69.2 pass-rush grade which ranked 16th in the NFL, and while that figure stands to make a significant leap in 2019 thanks to the addition of Quinnen Williams and other notable draft additions, having a player like Mosley who can help bring added heat as a blitzer certainly won't hurt.

In today's NFL, defending the run may not be anywhere near as valuable as defending the pass — but at least it's a start. And if players like Mosley, Williamson and Adams continue their success in run defense while others around them take the next step against the pass, the 2019 Jets may very well enter the season with the kind of defense they were once known for.