Now, this is what we’ve all been waiting for. The 17-week regular season narrowed the field from 32 to 12, culminating with the NFL’s best teams fighting for a spot in Super Bowl LIII. Wild Card Weekend kicked us off with an exciting slate of games resulting in the Colts, Cowboys, Chargers and Eagles each advancing one step closer to their ultimate goal. Below we’ll focus on some players who stepped up in a big way this weekend and made a positive impact for their teams.

A glossary with further explanation of PFF Signature Statistics can be found here: https://www.pff.com/news/pro-pff-signature-statistics-a-glossary

Key Signature Stat: 9-of-14 for 165 yards on passes targeted 10 yards or further downfield.

PFF’s Comeback Player of the Year had his highest graded game of the season on Saturday, finishing with an elite 93.2 overall grade. Luck put on a clinic in the first half that effectively put the game out of reach for the hosting Texans.

Luck was effective looking down the field all afternoon with 78.8% of his total yardage coming as “air yards” rather than yards after the catch. 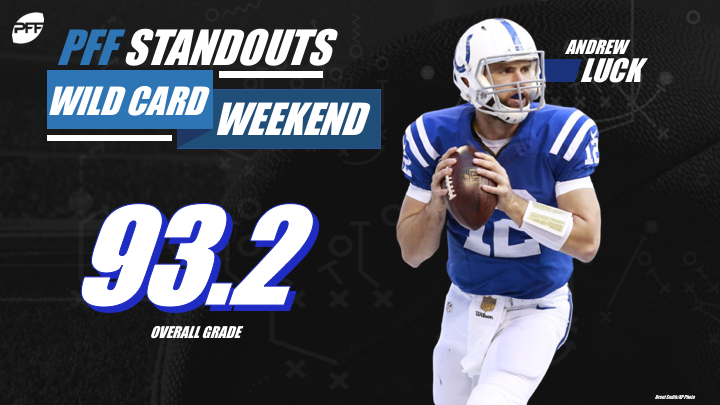 Houston’s oft-maligned offensive line actually ended up with the best pass-blocking efficiency of the weekend at 87.7. Trailing the entire game, they were forced to drop back 57 times, and they allowed a relatively low nine total pressures (six hurries, two hits and one sack).

Davenport struggled throughout the year, but he had by far his best game on Saturday. He was Houston’s most effective run blocker and only allowed two hurries on the day.

Dallas’ bell cow back saved his best for when it mattered most, turning in his highest graded game of the season on Saturday.

He made the most of his 26 carries, forcing two missed tackles and consistently gaining additional yardage after contact. He also broke off two long runs (15-plus yards) for 61 yards, giving him a 44.5% breakaway percentage.

On the day, Lockett provided three big plays, securing all three of Russell Wilson’s catchable deep passes (20+ yards downfield) for 118 yards. Unfortunately for Seattle, the rest of the Seahawks' passing game didn’t have the opportunity to gain much traction.

Lockett also had a 52-yard kick return towards the end of the first half that led to a missed Seattle field goal.

Ingram’s name came up early and often on Sunday, as he was the main culprit in suffocating Baltimore’s running game, finishing with five run stops on the afternoon.

Not only did he have the highest run stop percentage of the weekend, but he also boasts the third-highest pass-rushing productivity of Wild Card Weekend at 12.9. Moving around the formation as to best take advantage of favorable matchups, Ingram took down Ravens quarterback Lamar Jackson twice and hurried him three more times. 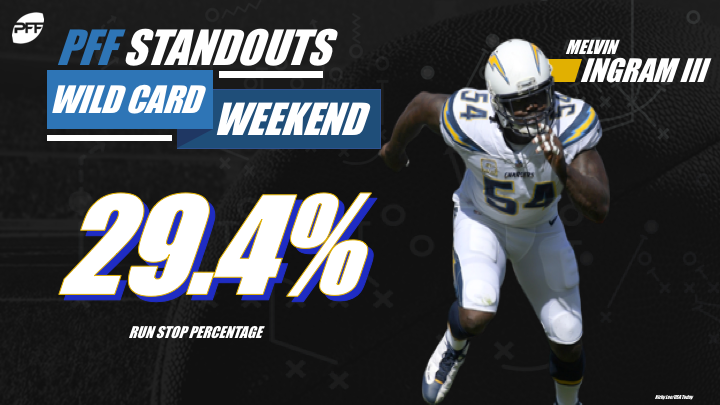 No one was more effective at pressuring the quarterback this weekend than Baltimore’s Judon. The seldom mentioned third-year pro has grown into a key cog in Baltimore’s defense the past two seasons. On Sunday, he hit Philip Rivers four times and pressured him once more on his 17 pass-rush snaps.

He also produced three stops in the run game to round out an excellent all-around performance.

The second team All-Pro rookie linebacker had a weekend-best eight defensive stops – four in the run game and four against the pass.

After finishing second in the league at his position in run stop percentage during the regular season, Vander Esch continually bottled up Seattle’s ground game despite their continued attempts to break through.

Bradham made plays all afternoon and was single-handedly responsible for a Chicago three-and-out towards the end of the first quarter when he defended two passes and took down Jordan Howard short of the sticks on the third down.

The veteran linebacker consistently had success shooting gaps, resulting in two tackles for loss and five stops in the running game.

The second-year linebacker showed well in his first playoff game and made a positive impact against the run (three defensive stops), in coverage (zero receptions allowed, one batted pass) and rushing the passer (one hit and one hurry on five pass rushes).

On his 40 coverage snaps, Phillips allowed one reception on three targets for eight yards on the day, with a pass breakup and an interception accounting for the two incompletions. The interception led to a field goal, as did his first-quarter fumble recovery.

Exclusively lining up in the box, Phillips also led all defensive backs with a run stop percentage of 16.7%, highlighted by back to back stops of Ravens running back Kenneth Dixon on the last play of the first quarter and the first play of the second.