The 2018 season was always going to be a vitally important chapter in the Ryan Tannehill story. The Miami Dolphins’ quarterback, now in his seventh year in the league and in his first year back from a serious knee injury, has never really blossomed into the star signal-caller that many hoped he would become. The highest-graded year of his career came way back in his sophomore campaign of 2013 — when his overall grade 80.4 was good for ninth among players at the position — but unfortunately for the former Texas A&M standout, he has never managed to replicate that same level of play. This year, after a lost 2017 season and an offseason full of circling rumors about his potential departure, Tannehill simply needed to prove to his organization that he was still the man for the job. 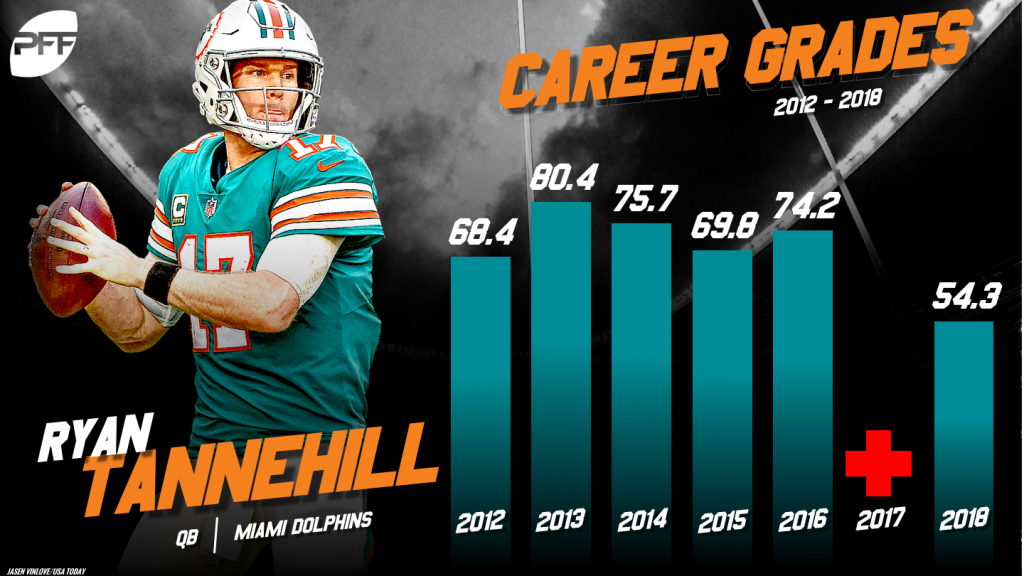 On paper, Tannehill has done just that this year. While the injury questions may remain (he has missed five games this year with an injured shoulder), there is no doubting the fact that he has put up the best box score numbers of his career, which in turn, could go a long way towards extending his stay in South Florida. However, those box score numbers do not tell the whole story.

In his eight games, Tannehill has completed 132 of his 197 pass attempts for 1578 yards, 16 touchdowns and just six interceptions. His 67.0% completion percentage ranks 14th among 38 quarterbacks with at least 100 attempts, his 8.0 yards per attempt put him 10th, and his career-best 105.7 passer rating ranks fifth, just below Atlanta's Matt Ryan and just above Philadelphia's Carson Wentz and Los Angeles' Jared Goff. 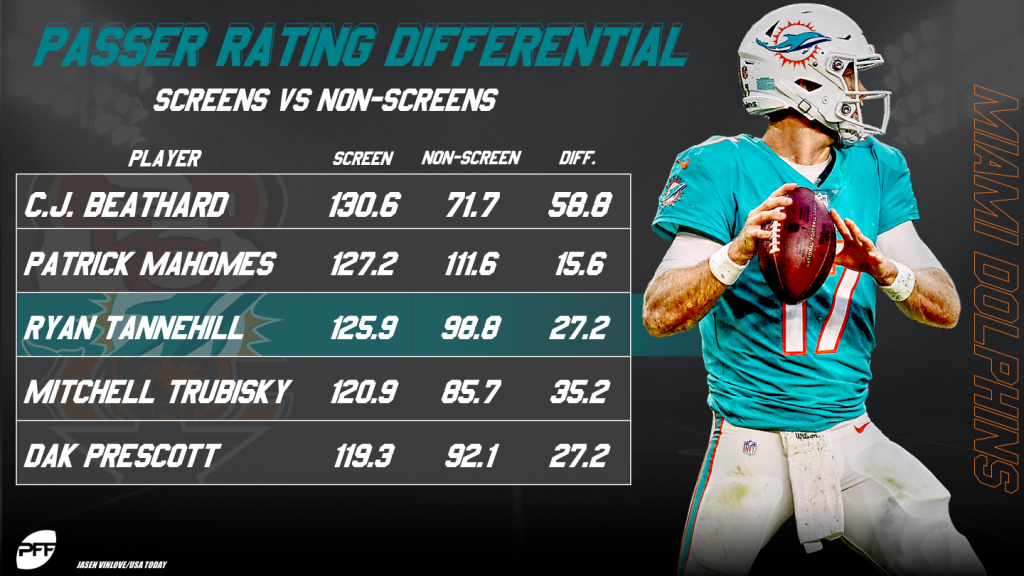 With such a positive impression on the stat sheet, you can easily be led to believe that Tannehill is in the midst of a career-year, but in reality, the exact opposite is true.

This is where our PFF grades come in, and it's yet another example of why our grading is the most effective quarterback evaluation method out there. PFF grades every player on every play and does so independently of the results of the play. Quarterbacks are graded on the plays they make, not on the plays of others after they have released the ball. If a passer dumps the ball off to his check down, we see that as an expected, routine play—whether that check-down gains a couple of yards, loses a few, or breaks five tackles and takes it to the house. The quarterback’s grade won’t change based on the actions of the check-down player and the defenders — but his passer rating certainly would.

The above play is the perfect example of the big plays that have impacted Tannehill's stat line without him having to make the special throws to make them happen. Here, in the fourth quarter of his Week 3 contest against the Oakland Raiders, Tannehill is 1-for-1 for 74 yards and a touchdown, which generates a perfect passer rating of 158.3. The stat line is mightily impressive, but the ‘throw' itself? All Tannehill realistically has to do on the play is make sure the ball successfully travels the 12 inches in the air into the open arms of the dynamic Albert Wilson, who then takes it 78 yards after the catch for the score. Tannehill ended that game 17-of-23 for 289 yards, three touchdowns and a passer rating of 155.3 — the second-best single-game mark of his career. However, if we take out that screen and the four other screens he attempted in the game, his stat line would read 12-of-18 for 195 yards and one touchdown, which would drag his passer rating down 121.3, which is still impressive, but not nearly as awestriking as his official numbers.

This is just one play in one game of one season, but it perfectly summarizes the caliber of year that the Dolphins' quarterback is having. This year, Tannehill is averaging 7.7 yards per pass attempt on screen passes, which is the fourth-highest rate among the league's quarterbacks, while his 125.9 passer rating is good for third, just behind C.J. Beathard (130.6) and Patrick Mahomes (127.2). If we take away those plays, Tannehill's passer rating drops down to 98.8, which puts him 10th among qualifying players at the position. 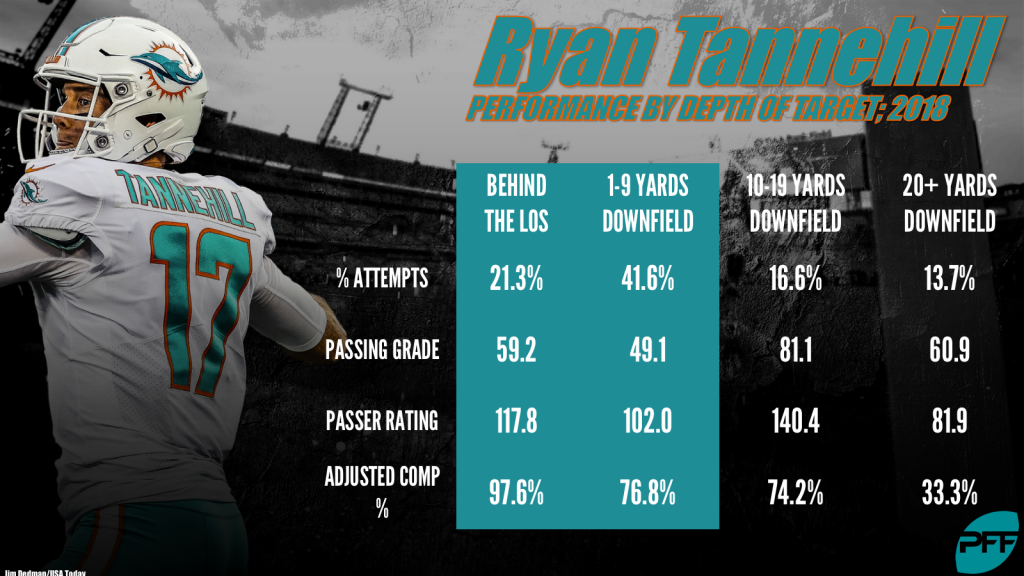 Now, it must be noted that Tannehill is performing well on his attempts to the intermediate range of the field (between 10 and 19 yards from the line of scrimmage), but the problem is that he's not throwing to that range anywhere near as often as the league's top quarterbacks. Through 14 weeks, Tannehill's average depth of target sits at just 8.7 yards downfield, which is good for 16th among the 38 quarterbacks with at least 100 attempts this year. The bulk of Tannehill's attempts (62.9%) on the year have been targeted either behind the line of scrimmage or in the short range (1 to 9 yards downfield), which is the league's 10th-highest rate, which means that he's rarely testing defenses deep downfield. 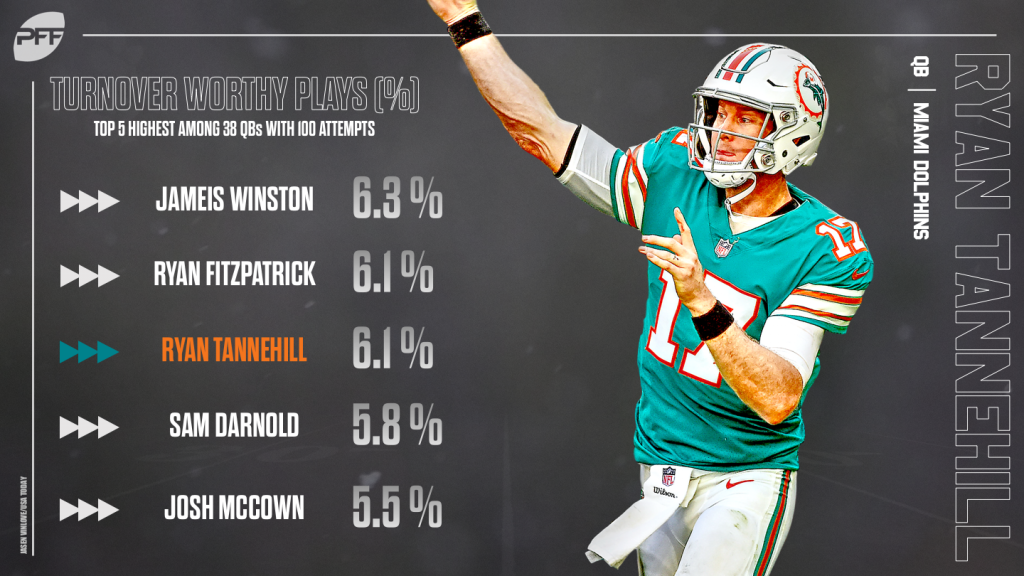 Tannehill may be relying heavily on the playmaking ability of teammates, and he may not be posing any real threat as a deep passer, but the biggest blight on Tannehill's so-called career-year is the frequency with which he's putting the ball in harm's way. This is the main reason why his overall grade of 54.3 ranks 34th of 36 qualifying players this year.

Unfortunately for Tannehill, his failures to take care of the football are not being balanced out by a tendency to produce big plays downfield, and that is not helping his cause. He's produced a big-time throw (our highest-graded throws, generally further down the field and/or into tighter windows) on just 4.1% of his total pass attempts which is good for 22nd among quarterbacks. In eight games, he's managed to become one of just 10 quarterbacks who has thrown more turnover-worthy passes than big big-time throws.

Here is the most telling statistic for Tannehill's season: In his eight games, the Dolphins quarterback has had six interceptable passes dropped by a defender, which is tied with Big Ben for third-most among quarterbacks, which is astonishing because Roethlisberger has 359 more passes to his name this season. If we add those “should have beens” to Tannehill's season figures, that career-best passer rating of 105.6 drops down to 90.3, which would sandwich him between Mitchell Trubisky (92.1) and Andy Dalton (89.6) for 24th in the NFL – which is a much better depiction of how he's played this year.

Over the last three games, Tannehill's numbers have sparked a fire of hope inside the Dolphins fan base. They still have a chance to make the postseason, and for the first time in his career, their quarterback is coming off three straight performances with a passer rating of 100 or more. However, the reality is that Tannehill's performances have nowhere near as good as his numbers indicate. Over the last three games, Tannehill has let go of four turnover-worthy plays — which is tied for the fourth-most among quarterbacks in that span — and he's earned a grade of just 57.2 for his efforts. As the last three games approach and the Dolphins' playoff window starts to close, one thing is fore; the Dolphins need their quarterback to start performing up to the standards of his stat sheet.