Week 13 NFL Team of the Week 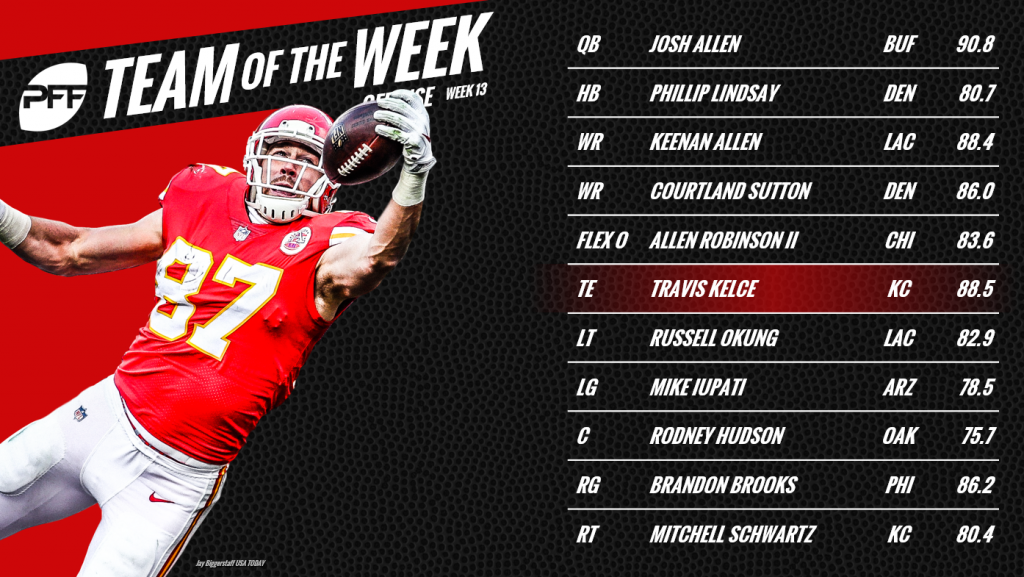 As a passer, Allen was up and down in Week 13. He made some special throws, he made some poor throws. He had two touchdowns on throws 20-plus yards downfield, but went just 3-for-12 on those, and had two interceptions too. He really impressed as a runner though, picking up seven first downs, forcing two missed tackles, and seeing six of his rushing attempts go for 10+ yards.

An undrafted rookie out of Colorado, Phillip Lindsay continues to represent a steal for the Broncos, producing his sixth game of the season with a PFF grade of 75.0 or higher. From his 19 rushes on Sunday, he produced two touchdowns, five first downs, and five runs of 10-plus yards.

Allen had one of the highlight plays of the week, coming down with a tipped pass in the end zone for a key score in the Chargers come-from-behind win over the Steelers. Over the course of the game, 10 of his 14 receptions resulted in a first down or touchdown, making up for his two drops.

When the Broncos traded away Demaryius Thomas, many people expected a breakout from Courtland Sutton. It took a few weeks for it to happen, but it finally did this week. Three of his four receptions went for a first down or touchdown, with Sutton averaging 21.3 yards per catch.

It was really close between Kelce and Detroit’s Levine Toilolo, with the Lions tight end producing an impressive blocking performance, but in the end the nod goes to Kelce after another dominant performance as a receiver. Eight of his 12 receptions went for a first down or touchdown, and he finished the game with a perfect passer rating of 158.3 on throws where he was the targeted receiver.

Robinson had another impressive performance, making some highlight reel grabs in the process. All five of his receptions resulted in a first down, with Robinson forcing two missed tackles and averaging 15.8 yards per catch.

The veteran left tackle allowed just one total pressure from 41 pass-blocking snaps in the win over the Steelers. For the season, he has allowed just 17 total pressures, with Sunday representing his best performance of the year so far.

Iupati didn’t allow a single sack, hit or hurry from 20 pass-blocking snaps, giving him a perfect 100.0 pass-blocking efficiency rating. He also delivered some key blocks in the running game, with the only big knock on his day being that he only saw 37 snaps on the field.

Hudson, as he has done many times before, didn’t allow a single sack, hit or hurry from 45 pass-blocking snaps in the Raiders loss to the Chiefs. So far this season, the NFL’s top pass blocking center has allowed just three total pressures from 499 pass-blocking snaps.

Brooks didn't allow a single sack, hit or hurry from 42 pass-blocking snaps in the Eagles' win over the Redskins on Monday Night Football. Brooks has allowed nine total pressures all season, but none in the past five games.

Schwartz allowed just two total pressures in the win over the Raiders, coming from 45 pass-blocking snaps. Through 12 games, Schwartz has allowed an average of just one pressure per game, and just one sack so far this season. 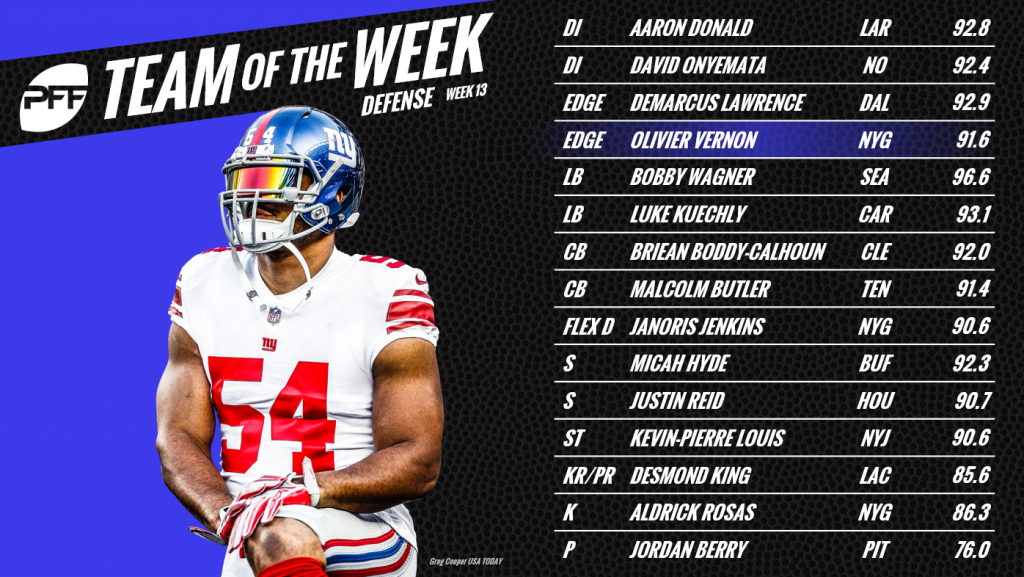 Lawrence was at his dominant best in the win over the Saints on Thursday Night Football, racking up a sack, a hit, three hurries and a forced fumble from 27 pass-rushing snaps. Over the past three games, he has produced 13 total pressures, including four sacks and four hits.

Donald is on course to be the defensive player of the year once again, and is threatening the single season sack record, despite playing on the defensive interior. In the win over the Lions, he was utterly dominant once again, racking up two sacks, two hits and three hurries from 40 pass-rushing snaps.

This was the best performance of the season for David Onyemata, who is making the most of his opportunities for the Saints. From just 21 pass-rushing snaps he managed to sack Dak Prescott three times, and he also produced two defensive stops.

Vernon delivered by far his best performance, setting or tying season highs in total pressures, sacks, defensive stops and forced fumbles. After his two lowest-graded performances of the season where he combined for just five total pressures, Vernon had six in this game alone.

Wagner delivered one of the best games you’ll see on the defensive side of the ball all season on Sunday, producing 90.0-plus PFF grades in run defense, coverage and the pass-rush. From his pass-rushing snaps, he racked up a sack and two hits, while in coverage he had a pass breakup and an interception that he took back 98-yards for the Seahawks touchdown.

Lost in the talk of Cam Newton’s four interceptions and the Panthers offensive struggles was Luke Kuechly delivering his top performance of the season so far. Kuechly registered three tackles that resulted in a defensive stop, didn’t allow a reception in coverage, and forced two incompletions.

Targeted four times in coverage, Boddy-Calhoun did allow four receptions, but they went for just 20 yards. Both of his tackles on the day resulted in a defensive stop, and he added a forced fumble in what was by far his highest graded performance of the season so far.

From the five passes thrown into his coverage, Butler allowed an NFL passer rating of just 8.3. That’s because he allowed just two of those passes to be caught, with one going for 10 yards, and the other for minus four. To go along with that, he also came away with a crucial interception in the win for the Titans.

Hyde made a big impact for the Bills despite their loss to the Dolphins, coming away with an interception and two defensive stops. So far in 2018, Hyde is on track for the second highest graded season of his career, with this week proving to be his best performance of the season so far.

Reid allowed a huge reception to Antonio Callaway in the win over the Browns but made up for it by chasing him down to force a fumble inside the five-yard line. He also tallied two pass breakups, with this performance marking the second time in his rookie season that he has produced a PFF defensive grade of 90.0 or above.

Jenkins was targeted six times in coverage in the Giants overtime win over the Bears, but allowed just one reception for 12 yards. More impressively, he finished the game with three pass breakups, forcing more incompletions than completions allowed.

Berry punted four times in the Steelers loss to the Chargers, with two of those punts landing inside the Los Angeles 20-yard line. His net yard averaged was ruined by King’s long return, but overall, it was a good night for Berry.

King came away with one of the biggest plays of the game for the Chargers in their comeback win over the Steelers, taking a punt to the house for a critical touchdown.

Pierre-Louis played 25 snaps on special teams this week, seeing time on the kick return, kick coverage, punt return and punt coverage units. He had a pair of impressive blocks on kick returns and added a blocked punt to cap off his day.