The Chicago Bears made the decision to compete now when they traded their next two first-round picks for Khalil Mack. With the best team defense grade (90.5) in the league, the move paid off, and the Bears are currently sitting atop the NFC North with a 4-3 record. However, if the team wants to win in the playoffs, quarterback Mitchell Trubisky will have to step it up soon. The truth is, over their first seven games of the season, the Bears have won mostly in spite of Mitchell Trubisky rather than because of him.

Trubisky earned a 66.4 overall grade in his rookie campaign last season, ranking 28th out of 42 quarterbacks. It was understandable for a rookie who was still getting used to the speed of the NFL game. Now in his second year, Trubisky has managed to play even worse, as he currently has an overall grade of 57.7, which ranks 33rd out of 39 quarterbacks. Just above him is Brock Osweiler, and even higher is Eli Manning and C.J. Beathard. 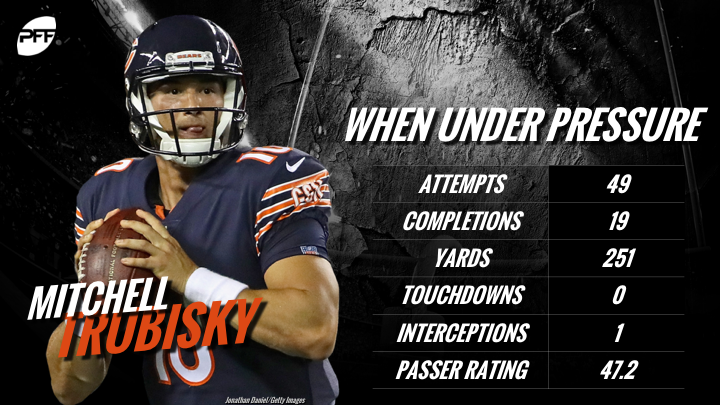 Trubisky’s poor play this season is largely due to his struggles under pressure. When pressured, he has an adjusted completion percentage of 47.6%, ranking 37th out of 39 quarterbacks. Couple that with his 47.2 passer rating under pressure, which puts him 31st, and you can see why he has graded so poorly this season. Trubisky’s lack of accuracy also shows even when he’s given a clean pocket, as his adjusted completion percentage of 74.9% when kept clean ranks 29th among qualifying signal-callers.

Trubisky has made a big-time throw on 5.0% of his passes, ranking 15th. This ranks in the top half of the league, but it’s likely not enough to offset a turnover-worthy play percentage that is 11th-worst in the league.

Trubisky is only halfway into his second season and still has plenty of room for improvement, but if the Bears want to get serious about the playoffs, he will have to improve quickly. Fortunately for Bears’ fans, Chicago’s offensive line ranks second in pass-blocking efficiency, allowing only 49 pressures on 278 passing snaps. This could help offset Trubisky’s struggles under pressure. And of course, the Bears have one of the NFL’s scariest defenses. If Trubisky can start showing some improvement, the Bears can put the win in Windy City when it counts.