For true football fans, the NFL season never ends. With the 2018 season now officially in the record books and the Lombardi Trophy residing back in New England after a one-year hiatus, it’s time to focus on roster building for 2019 and beyond.

The start of free agency coincides with the commencement of the 2019 league year on March 13th, as teams can start signing veterans from other teams or let their own players test the waters.

It appears that teams looking to upgrade the talent along the interior of their defensive line will have plenty of opportunities in April’s draft with a loaded defensive line class on deck. However, the universe of upcoming available defensive interior free agents is a relatively thin one, with five listed in PFF’s list of top-50 NFL free agents of 2019. Let’s dive in. 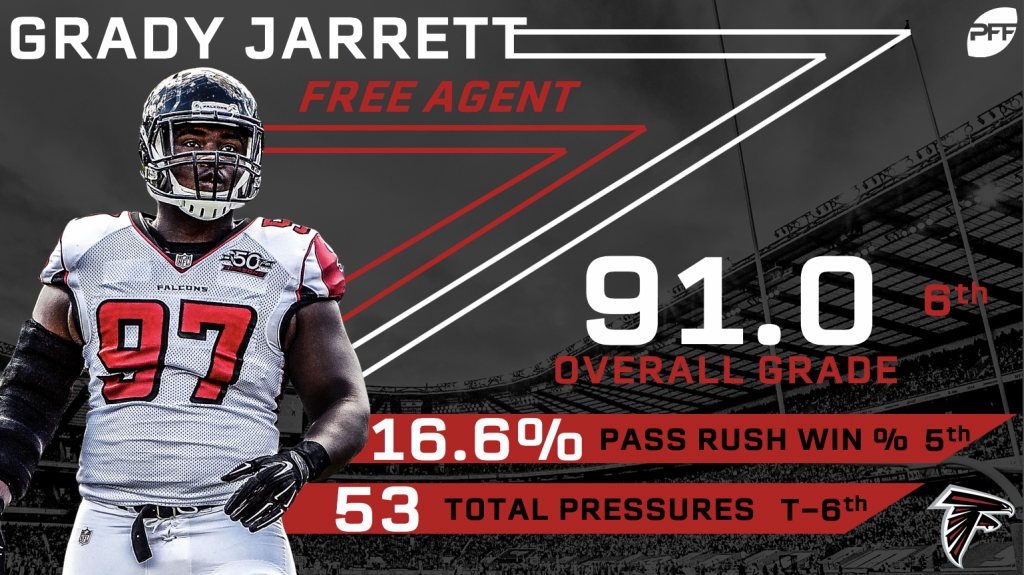 Grady Jarrett took the next step forward this season, bringing his overall grade from 83.6 to 91.0, tying him for the fifth-highest grade at his position. A fifth-round pick out of Clemson in 2015, Jarrett has made his mark in the league as an effective interior pass-rusher and should be able to cash in after the completion of his rookie contract.

Jarrett’s game-by-game productivity was remarkably consistent this season. His pass-rush grade of 86.7 was good for the fifth-highest leaguewide, and his 9.6 pass-rush productivity was seventh-best. On the season, he produced 53 total pressures, including 36 hurries, 11 hits and 6 sacks, showing the ability to be a game wrecker such as in Week 2 against Carolina when he had nine pressures (three hits + six hurries) and in Week 15 against Arizona when he finished with two sacks and four additional hurries.

Suh may be playing for his fourth team in 2019 after what should be considered a successful season on his $14.5M one-year pact with L.A.

His 83.0 overall grade was the third-highest of his career, and he impressively played 996 total snaps, second only to his teammate, the otherworldly Aaron Donald. The older and wiser Suh excelled in run defense, finishing with an 88.7 grade (12th-highest). His pass-rush grade took a step back to 67.0, but he still proved his ability to flash as a pass-rusher on occasion.

The 28-year-old Sheldon Richardson may also be looking to join his fourth team in 2019, after his own $8M one-year prove it deal in Minnesota. Richardson’s play hasn’t quite returned to the levels of his first two seasons with the Jets, but over the past four seasons, he’s settled into what we consider ‘starter’ level play, finishing in the 71.9 – 76.1 range each season.

He separated himself as a pass-rusher in 2019, as his 9.0 pass-rush productivity was good for seventh-highest amongst defensive tackles and nose tackles. His 47 total pressures are a step down from Donald and Fletcher Cox levels but place him second amongst upcoming free agents, only to Jarrett. 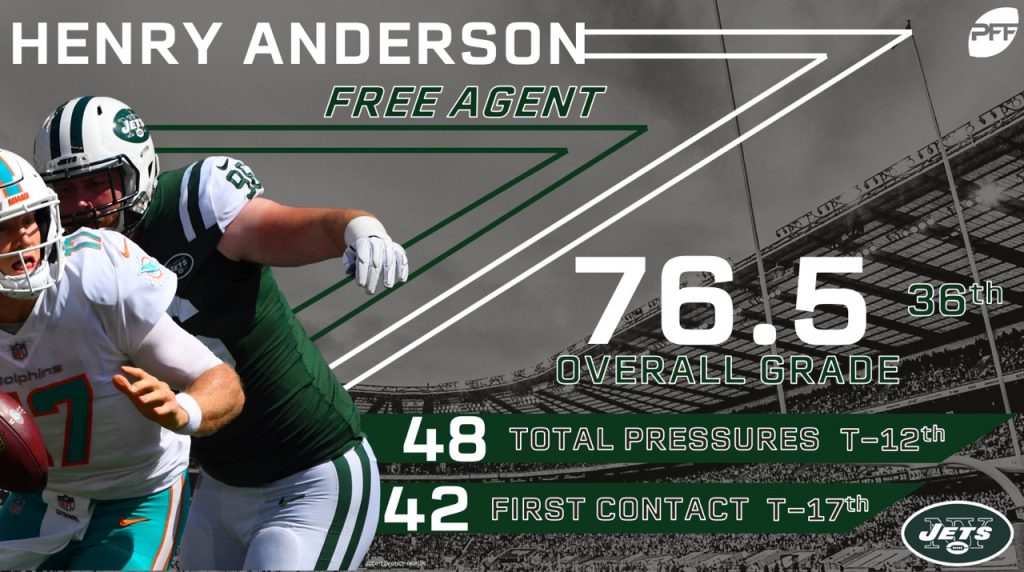 Always a presence when healthy, Anderson completes his rookie contract with his first complete 16-game season and his highest graded overall season at 76.5.

He shined at times for Gang Green in 2018, playing 60% of snaps and producing as a pass-rusher, finishing with eight sacks, eight QB hits, and 29 additional hurries. His career arc and ability to return from a torn ACL aligns well to receive a fair amount of interest in the marketplace.

After being released by the Jets last offseason, Wilkerson followed the trend of signing a one-year prove it deal with an expected contender, in his case Green Bay. Unfortunately for him, he suffered a leg injury in Week 3 requiring multiple surgeries.

In the small 2018 sample size, his production was at a ‘starter’ level and was a step forward from 2016 and 2017, where he struggled after signing a big contract in NY. At his best in 2012, he finished in the top-10 amongst 3-4 defensive ends in both pass-rush productivity and run-stop percentage. For someone with a body type not too far from Julius Peppers, Wilkerson could still have plenty left in the tank but may first need to sign another one-year deal in 2019 to exhibit the ability to return from injury.

The former first-rounder hits free agency after four seasons due to New England deciding not to exercise his fifth-year option for 2019. The timing for him may not be ideal, as he produced the lowest-graded season of his career in 2018. Brown played 43.2% of New England’s snaps, missing only one game on the year. However, from last season to this season, his run stops dipped from 27 to 16 while his total pressures dropped from 18 to eight, showing an inability to generate a consistent pass rush up the middle. A team in need of a steady presence against the run can add Brown to its defensive line rotation but shouldn’t be expecting much as a pass rusher.

Danny Shelton and Brown are fellow 2015 first-round picks who find themselves with some new jewelry after Sunday's Super Bowl victory for New England. Both are run defenders first and foremost, with Shelton primarily lining up as a nose tackle. Shelton played only 34.4% of New England’s total snaps but finished with a strong 77.0 overall grade in 2018. He projects as another rotational piece for a team in need of an early down interior lineman.

After being all potential in Cincinnati over his first four seasons as a raw prospect with tantalizing size, he’s been able to capitalize on these talents in Indianapolis the past two seasons. Hunt started his career playing on the edge but has had more success since shifting inside in Indianapolis. He’s played at a starter level in 2017 and 2018, playing 53.5% and 74.2% of snaps in each season, respectively.

This season he showed well in run defense with a respectable 8.3 run-stop percentage, finishing with 20 run stops on 240 run snaps. The Estonian born giant may still be able to ring some additional pass-rush productivity from his 6-foot-8 frame.

The former sixth rounder has only played 1,115 snaps over his four seasons, either due to strictly being a rotational piece or because of injuries.

Surrounded by the likes of J.J. Watt and Jadeveon Clowney, Covington had opportunities to take advantage of many one-on-ones, and he has demonstrated the ability to do in his relatively small sample size, earning a pass-rush productivity of 8.1 in 2018, 19th-best among defensive tackles in 2018. The 25-year-old could be a prime candidate for a breakout in 2019 with the right fit and opportunity.

After going unsigned all offseason, Hankins latched on in Oakland after Week 1 of the regular season, quickly earning the starting nod when Justin Ellis went down on a thin Raiders defensive line.

Hankins' first four seasons of starter level play for the Giants earned him a big payday with Indianapolis in 2017, a marriage that only lasted one season. The veteran played admirably in Oakland this season, but his overall grade took a step back to 66.5, second-worst of his career. While Hankins offers very little as a pass rusher, the nose tackle has demonstrated spurts of very strong run defense and finished with 18 run stops in 2018. He can remain a depth piece moving forward.