The 2019 linebacker free agent class contains some true studs at the top with some strong depth talent toward the bottom. Every team wants a dependable leader in the middle of the defense, and taking a shot on some of the guys who have seen only limited action in their careers could prove to be a valuable move for the future. Those teams will have to choose among a pool of linebackers who have all flashed in some way or another.

With that said, here are our top-10 linebackers in free agency:

After missing much of the 2017 season with an Achilles injury, Hicks made big — and maybe unexpected — strides in multiple facets in 2018. The former third-round pick upped his efforts in run defense, as he posted a career-best 81.3 run-defense grade (10th) while missing just five tackles all season. As a result, Hicks posted a grade north of 80.0 for the second time in his career, and his upward trajectory makes him an enticing option in free agency. 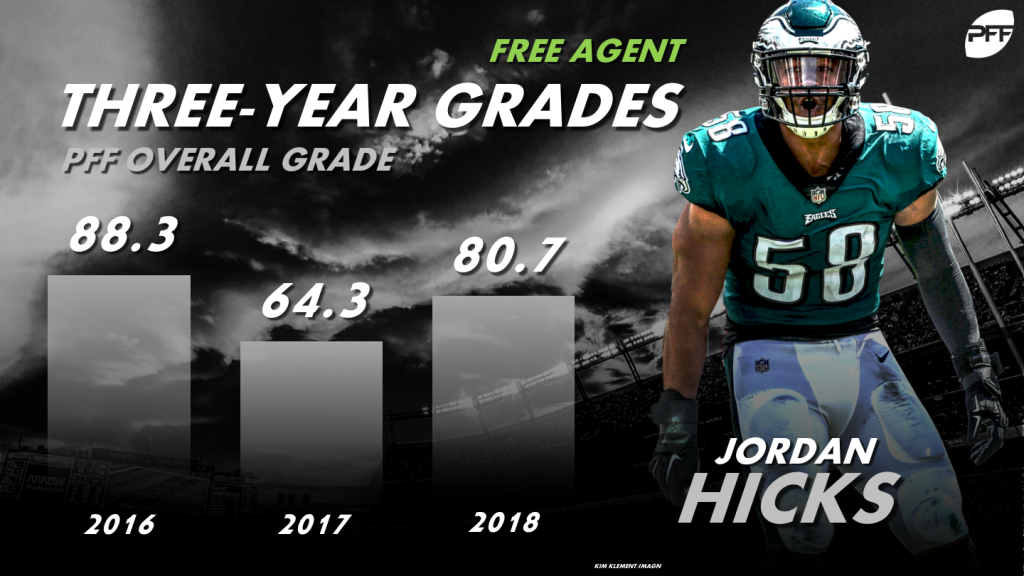 When the Baltimore Ravens drafted Mosley, they envisioned him slotting in as Ray Lewis’ replacement. While Mosley didn’t quite match Lewis’ 80.0-plus grades in his first four seasons, he still became a consistent leader of the Ravens' vaunted defense. He’s placed top-35 in run-stop percentage in each of his four years, including a career-best 10.6 percent in 2018. Mosley dispelled talk that he was a liability in coverage after posting career-lows in yards allowed (408), yards per reception (9.3) and yards after the catch (190). If he doesn’t get a big contract in Baltimore, another team will certainly be willing to shell out.

Aside from a horrendous showing in coverage against the Los Angeles Rams where he allowed three touchdowns in coverage, Barr proved he can make an impact from anywhere on the field in 2018. He led all linebackers with a 13.8 pass-rushing productivity percentage, accumulating 23 pressures on just 94 pass-rush snaps. Whoever Barr lands with will also be getting someone who can cover the middle of the field relatively well. Those three touchdowns he allowed against the Rams were the only ones he surrendered all year, and he had a career-best 73.3 catch rate allowed (20th) in coverage. 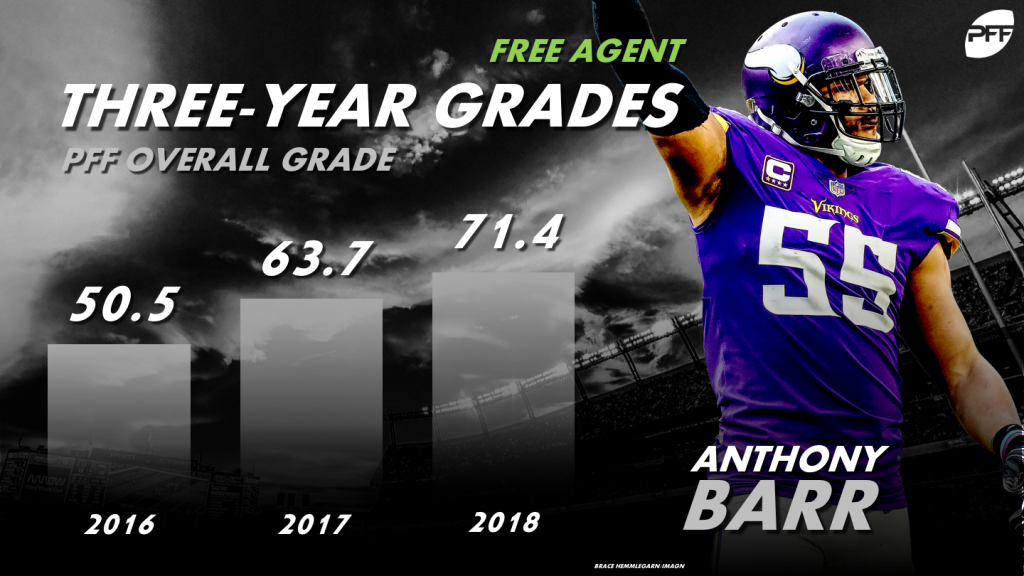 Wright may be the most intriguing player on this list, simply for the fact that he hasn’t truly had a bad season in eight years with the Seattle Seahawks. With no season grades below 65.0, Wright’s consistency sticks out in the best way possible. Wright has never had more than three penalties in a season and has only had double-digit missed tackles in one. Despite missing a large chunk of 2018 with an injury, the 2011 fourth-round draft pick should easily find a home in the middle of someone’s defense in 2019.

The former LSU product is just 24 heading into free agency, making him worth a look despite limited production. Alexander missed time in 2018 due to injury, so what he can bring to a team will likely be judged on prior production. His past has plenty of positives, including 11 combined pass breakups in 2015 and 2016, three interceptions and no touchdowns allowed in 2017, and double-digit pressures in his first three years in the league. He clearly has the tools to succeed at the NFL level, it’s just a matter of putting them all together to form one solid season.

Kendricks was once a top-five linebacker in the NFL, but a sharp decline in overall grade followed by a steady rise gives the second-rounder significant upside in free agency. His playmaker style got him five pass breakups (t-5th), 40 stops (t-28th) in and an 82.0 overall grade (9th) in 2017. With that being his last full season of football, Kendricks owns a strong resume — however, off-the-field issues in 2018 may prevent a team from taking a shot on him in the near future.

Lucky for Perryman, his career with the Los Angeles Chargers has been bookended by two stellar years — one being a promising rookie campaign and the other a strong 2018 season. Perryman has only once surpassed 400 snaps in a season, but he has upside for a team in need of depth at the linebacker position. He allowed the 12th-best catch rate (70.8%) in coverage this year among linebackers and racked up 22 stops on just 386 snaps.

With five seasons under his belt, Bucannon has yet to truly find his footing. His snap count has decreased in each of the last four seasons, and his overall grades have followed suit. Despite allowing a rough 14.5 yards per catch in coverage in 2018, though, there were a few bright spots. He missed just four tackles in the regular season while also posting seven quarterback pressures on just 29 pass-rushing snaps. With that said, Bucannon is likely a depth player for whoever snatches him in free agency.

Ryan missed the entirety of 2018, so his value in the market is based solely off three years of production — and he showed improvement in each one. In 2017, en route to earning a strong 75.7 overall grade (15th), Ryan had the fourth-best pass-rushing grade (85.6), 25th-best coverage grade (68.9) and 30th-best run-defense grade (72.9). That all-around ability and upside make him a low-risk option for a linebacker-needy team.

Rounding out the list is Brown, who joined the Bengals on a one-year deal before the 2018 season. Unfortunately for Brown, after playing 1000-plus snaps in four seasons with the Buffalo Bills, the injury bug finally hit as he missed nine games. A career-worst 55.8 overall grade in the shortened season means he’ll need to prove he still deserves meaningful playing time in 2019.