The top Rookie of the Year candidates after Week 1

All season long, PFF will be tracking the rookies around the league to keep tabs on the race for Rookie of the Year. Below is the first check-in after the Week 1 games. Who is out in front in the race? Read below to find out. 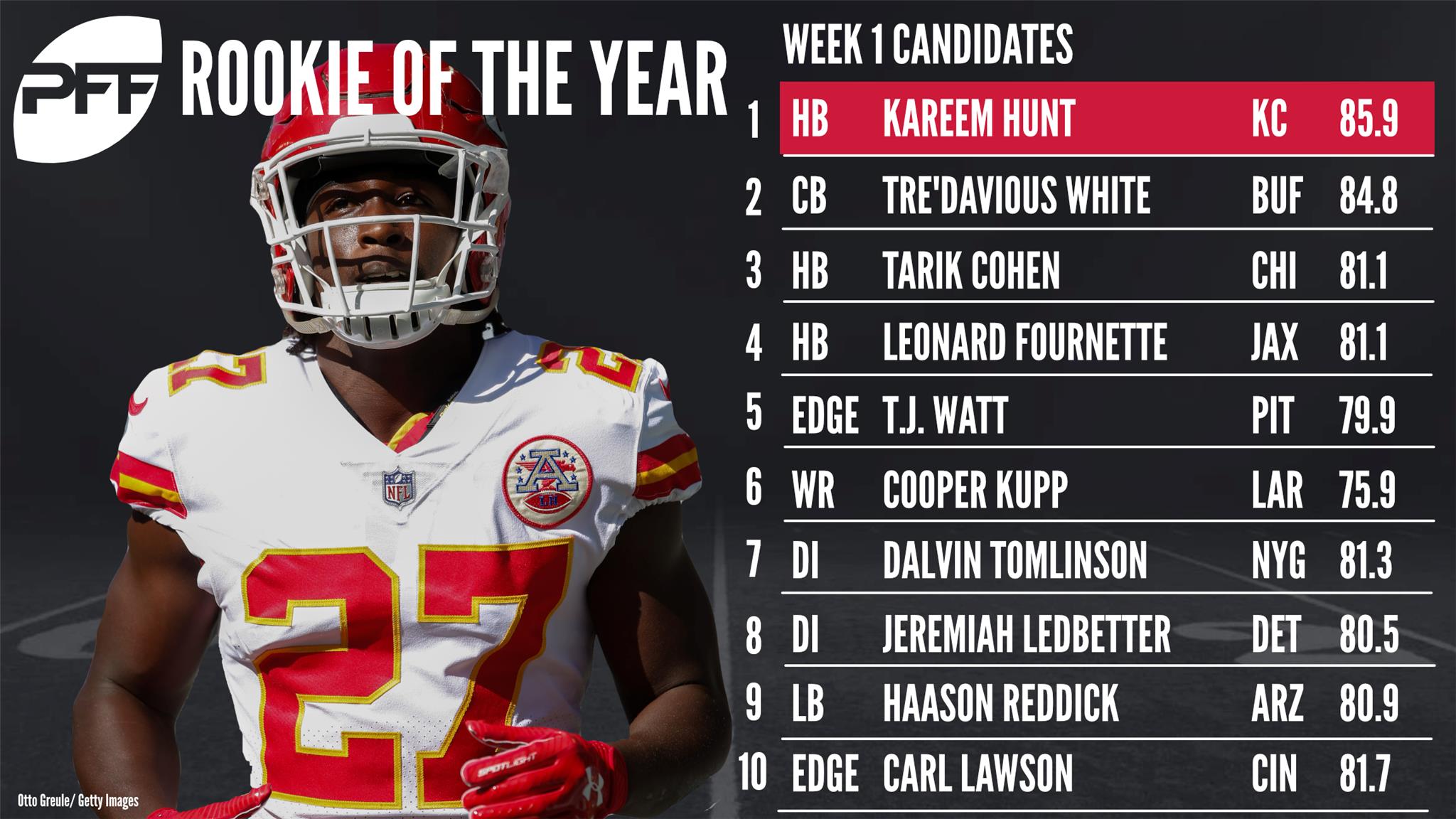 (Grades are subject to change on final review)

With the exception of a fumble on his very first carry, Hunt's professional debut was simply spectacular. Hunt was our highest-graded rookie in Week 1 and he was also our highest-graded running back, period. The rookie out of Toledo put up an absurd 145.5 elusive rating (ER boils down a runner's success beyond the point of being helped by his blockers) after he forced eight total missed tackles on 22 total touches while averaging 4.0 yards after contact per attempt, a rate which led all HBs in the opening week.

White ranked eighth among all corners in Week 1 with his 84.8 overall grade, doing it with a mix of solid coverage (84.4 coverage grade) to go with above-average run defense as well (80.9 run-defense grade). White allowed two of four targets to be caught for a total of 30 yards and broke up a pass intended for Robby Anderson. He also ranked sixth among corners this week with a 6.7 run stop percentage (a stop constitutes as a “loss” for the offense based on down and distance) after he tallied one stop on just 15 run-defense snaps.

Cohen tied with the back right below him on this list for the third-highest overall grade among all running backs this week, edging him out for the third spot here due to his work on special teams. Cohen led all HBs who saw at least five carries with a 92.4 breakaway percentage (the percentage of their yards gained on runs of 15 or more yards), earning 61 of his 66 yards on big gains. Cohen also forced six missed tackles on his 13 touches and earned the highest punt-return grade of any returner in Week 1.

Fournette only carried the ball nine times this preseason but even on just those carries there was some reason for concern, as he failed to force a single missed tackle and averaged just 0.89 yards after contact per carry. Fournette looked much more like the force that ran over SEC defenders though for years at LSU in Week 1, ranking 14th among running backs this week with a 45.1 elusive rating; he forced five missed tackles on 29 touches and his 2.62 yards after contact per attempt ranked 10th. Fournette also demonstrated some ability as a pass-catcher, his average of 4.0 yards per route run ranked third among HBs. 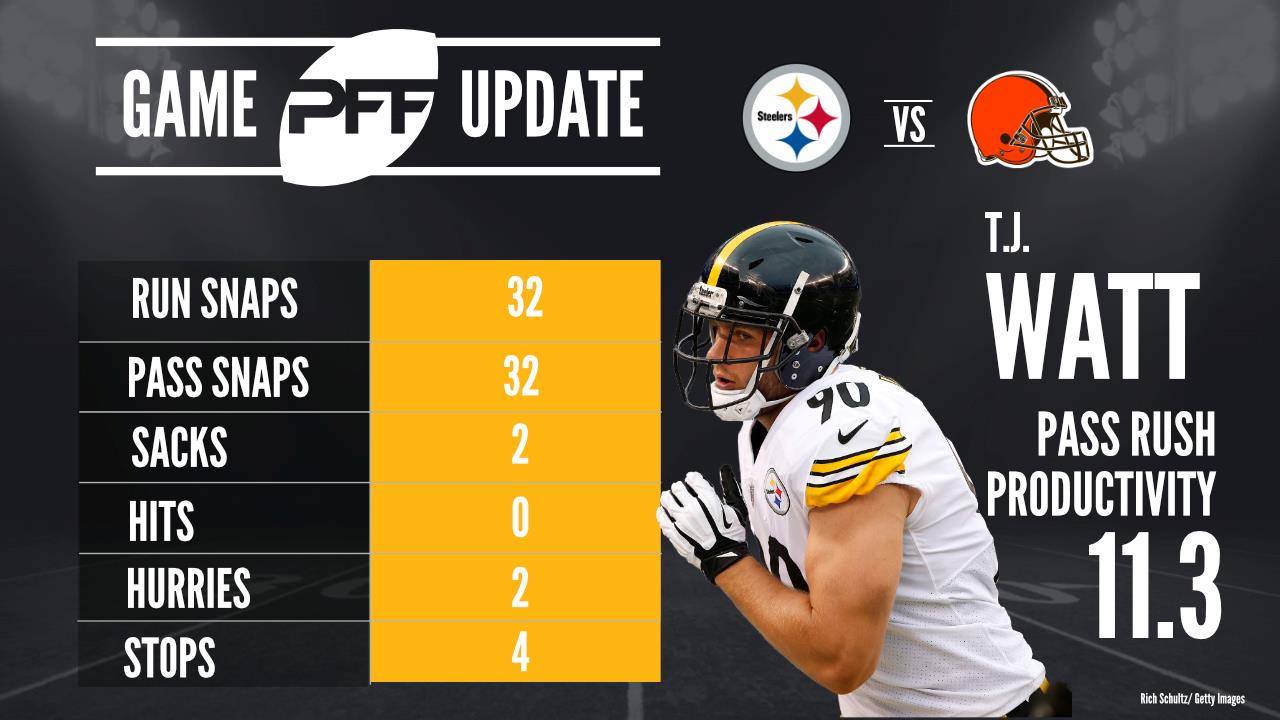 Watt had quite an impressive debut on Sunday, ranking 18th among edge defenders with his overall grade. He ranked 19th among edge defenders with a 12.1 pass-rush productivity rating (PRP measures pressure created on a per-snap basis, weighted toward sacks) after he tallied four total pressures (two hurries and two sacks) on 29 pass rushing snaps. Watt also tallied an interception to go with two additional stops; the only thing that kept him out of the top three on this list were his three missed tackles, which were the most among all edge defenders in Week 1.

Kupp ranked 20th among receivers this week in terms of overall grade, with his 79.5 receiving grade ranking 13th. The former FCS star ranked fourth this week among all receivers with a 149.3 WR Rating (a QBs passing rating when he's targeted) after he hauled in four of six targets (one of those incompletions was a drop, however) for 76 yards and a touchdown; and his average of 3.17 yards per route run (total yards divided by the number of routes run) ranked seventh.

Tomlinson ranked 15th among defensive interior players in terms of overall grade and his 86.4 run-defense grade ranked fifth. The rookie out of Alabama ranked ninth among interior defenders with a 15.8 run stop percentage after he tallied three stops on 19 run snaps.

Ledbetter ranked 20th among interior defenders in terms of overall grade and he finished with grades north of 70.0 as both a run defender (72.9 run defense grade) and as a pass-rusher (79.1 pass rushing grade). The sixth-round pick out of Arkansas ranked eighth among interior defenders with a 13.0 PRP after he tallied four total pressures (one hit and three hurries) on 20 pass-rush snaps.

Reddick ranked 16th among off-ball linebackers in terms of overall grade this week and he really excelled in run defense, where his 83.1 grade ranked sixth. Reddick also had a nice showing in coverage, he did allow all three targets thrown into his coverage to be caught but he limited the production on those catches to just eight total yards while tallying two stops. 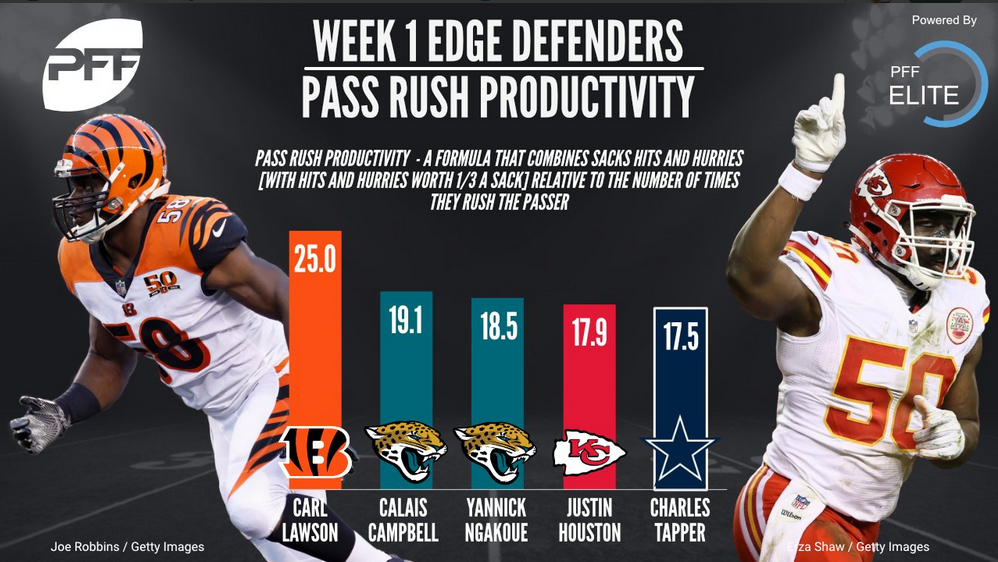 Lawson had the fewest snaps of anybody on this list, but he sure did make the most out of them. The rookie out of Auburn ranked 13th among edge defenders in terms of overall grade in Week 1 largely because he shined as a pass-rusher. Lawson led 77 qualifying edge defenders this week with a 25.0 PRP, tallying four total pressures (all hurries) on just 12 pass-rushing snaps (all from the right side).