Sixth-year safety Tre Boston has finally found a new home. The 27-year-old free safety was waiting for teams to “stop playing games” after proving himself once again on a one-year contract.

The Carolina Panthers clearly saw the value in the former fourth-round pick, signing him to a one-year, $3 million deal. Boston had spent the past two seasons on one-year contracts with the Los Angeles Chargers and Arizona Cardinals, but that didn’t stop him from making an impact on the field.

Since 2014, Boston ranks 12th among all safeties in overall grade (85.2) and holds the seventh-best coverage grade (92.2). His 11 interceptions since entering the league are tied for the 14th-most among his position group, placing him alongside names like Eric Weddle and Malcolm Jenkins.

Even more impressive has been Boston’s defensive success rate (forced incompletions+coverage stops/targets in coverage) of 41.5% through his first five seasons. He ranks fourth among all safeties with 75-plus targets and at least 2,000 coverage snaps during the PFF era, which began grading in 2006.

Despite these numbers, Boston continually tends to be the forgotten man on the free-agent market. He will look to once again prove that he is worth the investment for his new team, as he has done both in Los Angeles and Arizona.

This past season, Boston logged 950 snaps for the Cardinals and earned a 74.1 overall grade. He ranked 26th among safeties with a minimum of 300 snaps. In coverage, he allowed an NFL passer rating of just 61.0, which was the eighth-best mark for a safety in 2018. 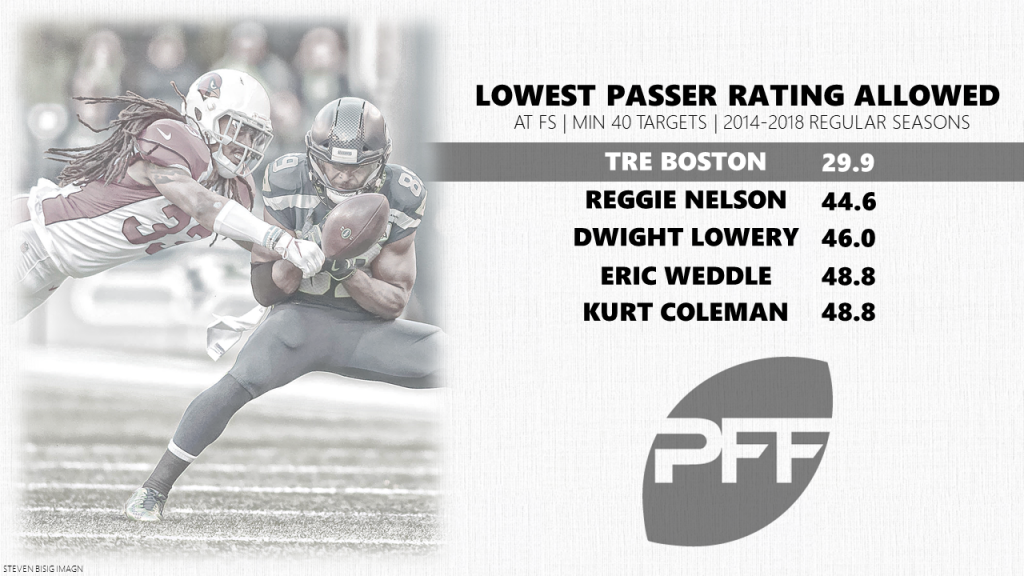 Carolina’s new ball-hawk has tremendous awareness at the back end of a defense, tying John Johnson III and Xavier Woods for the second-most pass breakups (7) among safeties last season. Over the last three years, Boston has allowed just four touchdowns in coverage while snagging 10 interceptions.

Since entering the league in the 2014 NFL Draft, Boston has posted the fourth-best forced incompletion percentage (20.2%) among safeties. He should immediately elevate the Panthers' secondary in 2019 despite having to adapt to another new system. Changing coaching staffs has yet to derail the former Tar Heel.

Boston excels when lined up at free safety but has plenty of experience moving all over the field. He’s taken 270 snaps in the box since the start of the 2016 season and has earned a 68.7 grade on those plays. He’s also seen his fair share of snaps at slot cornerback, logging 155 snaps at the position over the last three seasons. However, lining up in the slot is clearly Boston’s biggest weakness, as he has earned a 52.3 grade at the position since 2016 and gave up an NFL passer rating of 131.0 when covering the slot just a season ago.

The Panthers would be wise to utilize Boston’s strengths, which clearly come at the back end of a defense. While he has the ability to line up elsewhere on the field, Boston has earned an 86.6 grade at free safety on 1,491 snaps over the last three seasons. He should immediately boost the play of his teammates and give Carolina’s coaching staff more flexibility given his talent in taking away the deep ball.