The NFL's top defenses against each run concept

Though the run in today’s NFL is less important than it has ever been – passing is king – teams still need to be able to prevent offenses from just running all over them, if just to improve the favorability of the third-down passing situations they face.

At PFF, we track the run concept used on every rushing play and can therefore go even deeper and look at how teams fared when facing specific types of run plays.

When we think of blocking, we tend to break things down into zone-blocking or gap-, man-blocking systems, but within those broad buckets, there are various run plays and run concepts that can be employed.

Zone runs can target a point of attack that is inside or outside in their initial track, and we will focus on how teams defend inside zone and outside zone runs separately. Among the remaining gap-scheme concepts are power, counter and duo plays among others, and though those can be very distinct concepts, we will put them all in one bucket for the purposes of this article to define how teams defend against all gap concepts. 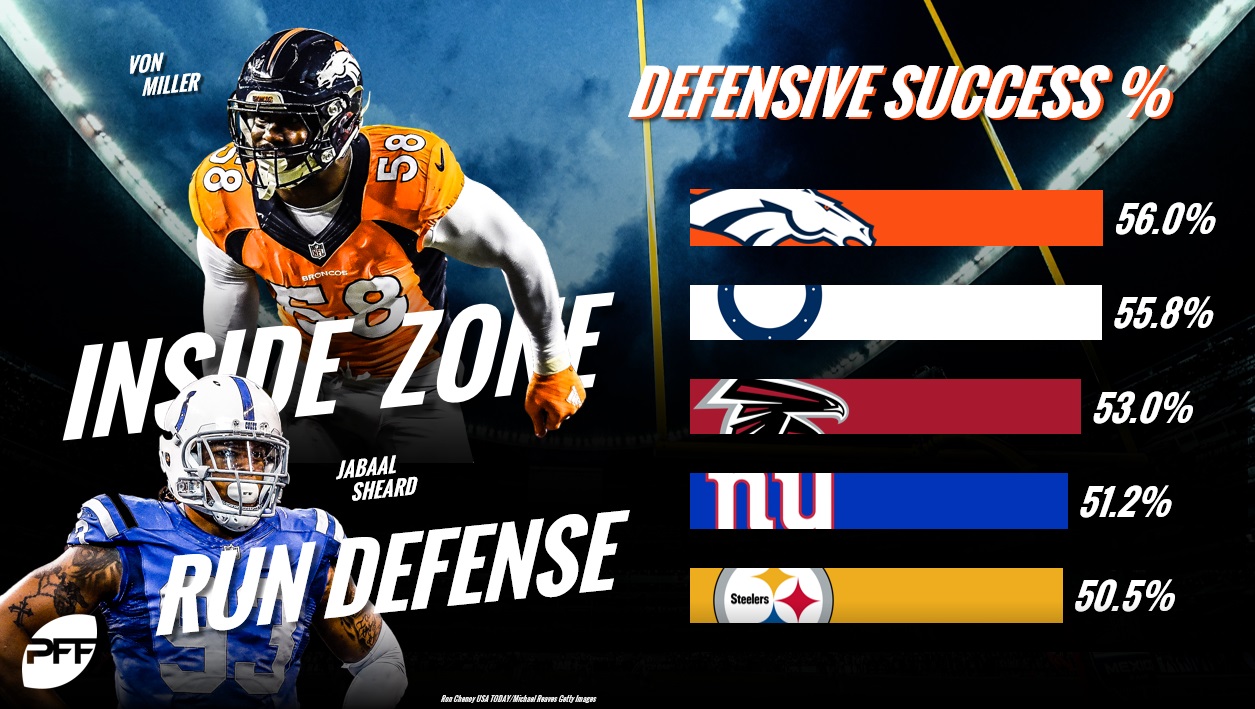 Nobody defended inside zone runs better than the Denver Broncos last season, who had a success rate of 56.0 percent, one of just four teams to top the 50-percent barrier. The Broncos allowed an average of just 3.1 yards per attempt on inside zone runs, also the best mark in the league and less than a yard before first contact on average. Denver’s run defense was dramatically improved up the middle in 2017, with an unexpected fine season against the run from Domata Peko at nose tackle, whose overall PFF grade jumped from an average of 46.3 over the previous four seasons to 80.0 with Denver.

Elsewhere in the top five, the surprise team from this list is the Indianapolis Colts, whose success rate of 55.8 percent only barely trailed the Broncos. The Colts had their own surprise performer in the shape of former second-round bust Margus Hunt, who teamed with Johnathan Hankins and Al Woods to give the team an unexpectedly solid interior run defense.

At the other end of the scale, the Cincinnati Bengals had the least success against inside zone runs, with a success rate of just 30.6 percent, allowing 16 explosive runs (runs of 15 or more yards) on 157 attempts. The Bengals also ranked among the worst in yards per carry defending inside zone and surrendered almost two yards per attempt before the ball carrier was even contacted by a defender on average. 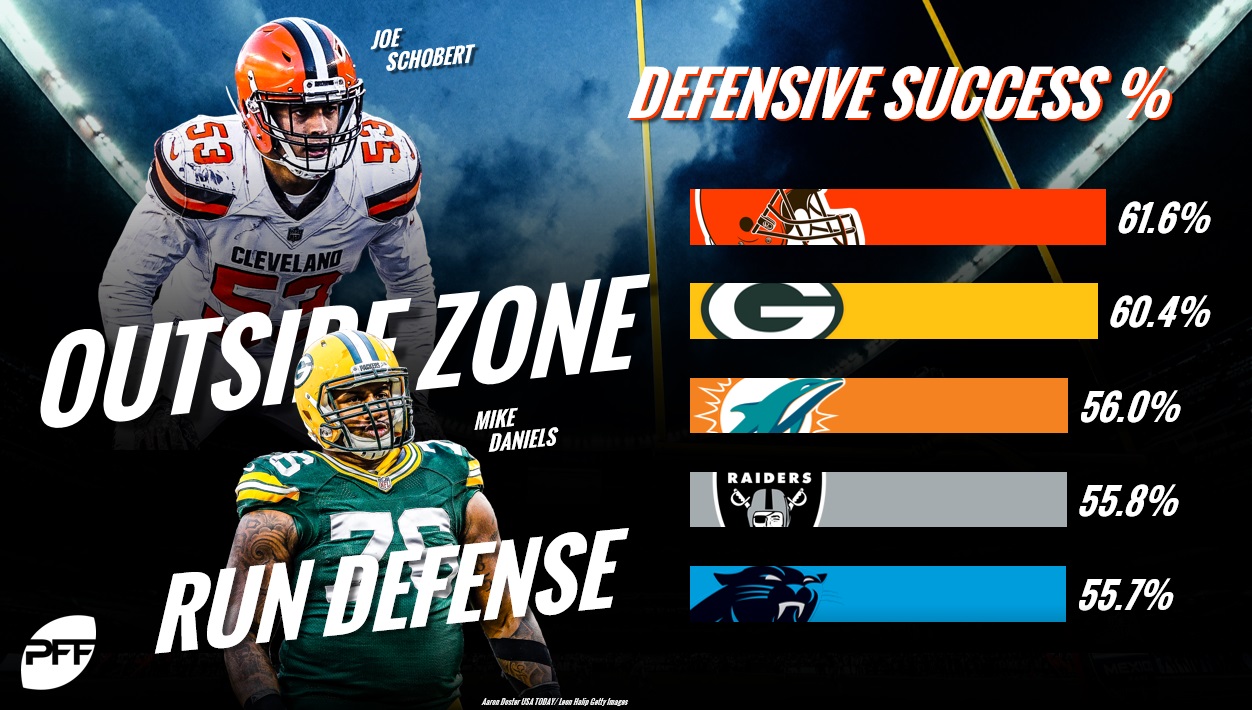 The Cleveland Browns saw the fifth-most plays of outside zone run against them in 2017, but actually had the best success rate of any team at 61.6 percent. They stuffed 39.7 percent of those attempts (tackles at or behind the line of scrimmage), more than 10 percent better than the league average and had 12 more run stuffs against outside zone than any other team. When we think of the strengths of that Browns run defense, we think of the big bodies up front, but they proved to be laterally mobile and edge defenders like Myles Garrett were able to set a hard edge and muddy the point of attack.

The Green Bay Packers saw 55 fewer plays of outside zone than the Browns did, but were right behind them in success rate against it, being the only other team to top 60 percent (60.4 percent). They allowed just four explosive runs against this run concept which was tied with the Minnesota Vikings for fewest in the league and trailed only the Vikings in explosive run rate due to the extra 12 attempts their division rivals had to defend against. The Browns and Packers were the only two teams in the league that actually made first contact on the ball carrier behind the line of scrimmage on average against outside zone runs, while the league average allowed almost a full yard before first contact.

Though they may have had one of the best defenses in football, against outside zone runs, the Jacksonville Jaguars surrendered 5.5 yards per attempt, the worst in the league. Their average of 1.5 yards before contact was also the worst mark in the league and their success rate of 45.7 percent was 29th but it was the Washington Redskins that had the lowest success rate at just 39.8 percent.

The Broncos weren’t just a one-trick pony against the run, and they led the league when defending gap concepts as well. Their success rate of 55.8 percent was the best in the game but you could make the case that the Philadelphia Eagles – second in success rate at 55.7 percent – actually had the better overall run defense. The Eagles averaged 1.1 yards per carry allowed less than the Broncos overall and more than half-yard less before contact. They stuffed 28.4 percent of gap runs against them, which is more than 10 percent better than the league average and 3.0 percent better than the Broncos.

The worst team in the league when it comes to success rate against gap concepts were the New England Patriots. Their success rate of 28.3 percent  was bottom of the league and one of just two teams below 30.0 percent. They surrendered almost two full yards per carry before first contact, again the worst mark in the league, and while the Eagles and Broncos stuffed almost a third of the gap runs that they faced, the Patriots managed just six stuffs – or 6.1 percent of their snaps against gap concepts.